The Skirmisher is a monument constructed in 1924. Its purpose was to celebrate the United Spanish War Veterans and was accepted during their annual parade in 1925. Robert Aitken created this monument, and was a veteran of the war himself. The monument has been moved several times. The most recent relocation in 1996 led to the discovery of a forgotten time capsule.

This is a 2014 picture of the monument. Posted by Raybrizzi of wordpress.com 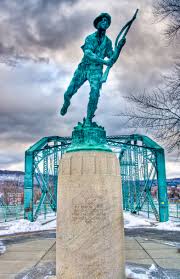 The Skirmisher is a monument created by Robert Aitken in 1924. It was gifted to Binghamton during the annual United Spanish Veterans parade in 1925. Aitken was a veteran of the war, and was aiming to create a unique monument. The stance in particular is supposed to depict a soldier charging into battle, a scene Aitken specifically recalls. The city of Brooklyn requested a replica, but Aitken denied it to keep the uniqueness intact. The only listed material of the statue portion is bronze. It is placed atop a cylindrical cement base.

The current location is in front of the Washington State Bridge which goes over the Susquehanna River. It has been moved several times, although the most recent time in 1996 was only 6 feet for traffic reasons. During this move, a time capsule was discovered, or rather rediscovered. The contents included newspaper clippings from 1925, war memorabilia from soldiers, and a letter from 1958 saying it had been found during relocation.  The Skirmisher was originally placed near other monuments, most notably for the Civil War, but the plans for a memorial circle fell apart and the monuments were scattered.

Thomas H. Barber Camp III is who reached out to Aitken to commission the monument, on behalf of the Broome County Historical Society. Aitken has many other works, including the Science fountain and Great Rivers statues at the Missouri state capital. There is also the Dewey Monument in San Francisco and multiple military statues at West Point. Aitken was born in 1878 in San Francisco, and died in 1949 in New York.