Built in 1920, this neighborhood movie house became a venue for live performances in 1957. In the years that followed, the theater was a venue for punk music, an underground disco, an art commune, a dojo, and a rave spot known as the "Lish House." In the many years of operating as a live music venue, this former theater has hosted Ella Fitzgerald, Duke Ellington, Ray Charles, and even Jimi Hendrix in his younger years. Hendrix attended a nearby high school and played some of his first gigs in the area.

Columbia City Theater in the 1950's

Inside of the Columbia City Theater today 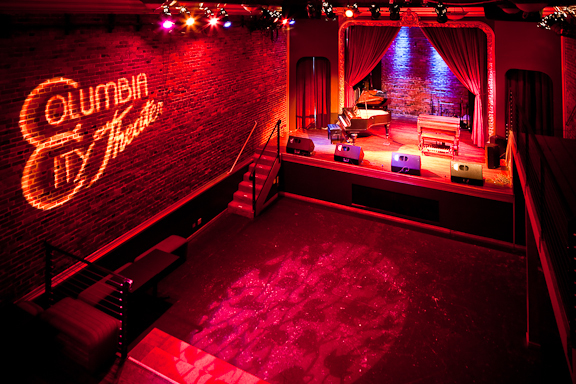 Carroll Eaton behind the counter of Carroll's Sweet Shop (in the lobby of Columbia City Theater), circa 1935 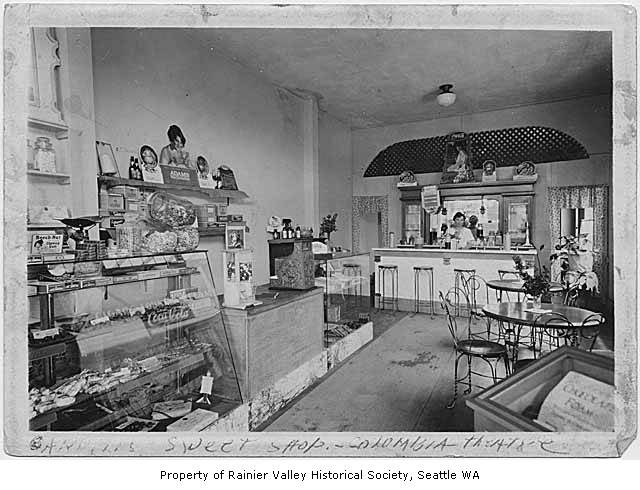 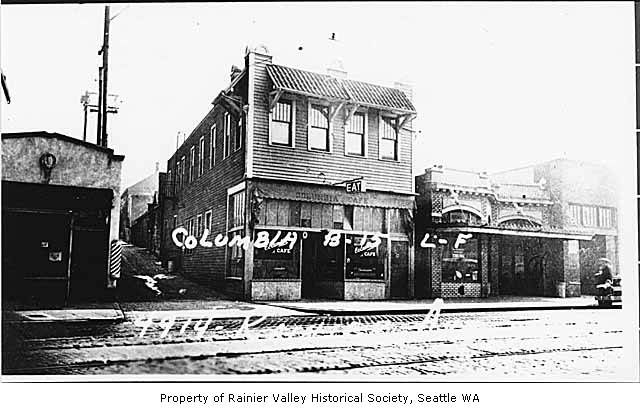 Columbia City Theater (far right) by the Columbia Cafe, circa 1957 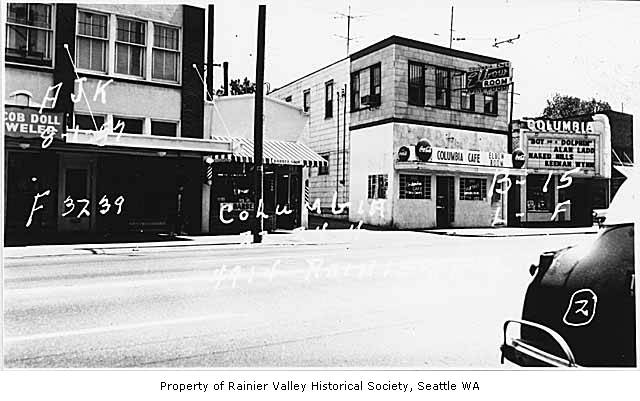 The Columbia City Theater’s brick facade was completed in 1920 with the intention of eventually opening a community movie theater. The building, designed by Seattle architect John L. McCauley, was originally built as a simple rectangle. However, the building was soon redesigned in an odd “T” shape, with a hallway heading to the auditorium in the back. Local tradition states that this was done in order to appease a city ordinance prohibiting all amusement buildings from operating within 500 feet of a school. The hallway to the auditorium is said to have been designed to be just long enough to meet the distance requirement.

Upon the completion of the auditorium in 1923, the Columbia City Theater was officially opened to the public. For 40 years it served solely as the neighborhood’s cinema, complete with a piano pit below the stage to accompany pictures and a front lobby that was rented out to local food vendors. Most notably, Caroll’s Sweet Shop, which operated there from 1923 through the 1930’s and was followed by Naylor’s Electric Bakery. There are also records alluding to use of the auditorium as a community meeting space well into the 1950’s.

It wasn’t until 1957 that live performances were held at the Columbia City Theater, but it quickly became an important fixture of the music and theater scene in Seattle. Like many old performance venues that have changed hands multiple times, Columbia City Theater has since lost the bulk of its records regarding events and performances that it has hosted. However, a long oral history includes stories of Duke Ellington, Ella Fitzgerald, and Ray Charles all performing there. Even a teenaged Jimi Hendrix is said to have played his earliest gigs with his high school band on its stage.

Throughout the early 1980’s, the theater was a significant spot for the DIY punk scene in Seattle and the national touring network of punk groups during that time. Later, it was used as everything from an art commune to a dojo to an underground disco. It even gained a reputation as a rave spot in the 90’s, operating under the name “The Lish House” for a period.

After experiencing financial troubles during the 2000’s, Columbia City Theater was bought and reopened in 2010. It has since enjoyed a revitalized image and impressive lineups. Macklemore & Ryan Lewis, The Lumineers, The Head and the Heart, Father John Misty, Andra Day, and many others have all headlined at the refurbished theater. It also hosts many burlesque shows, comedy sets, spoken word performances, among other forms of live expression- often from local artists. Some of these aspiring artists who perform at the theater are not compensated with money, but rather with free access to the theater’s new recording studio. The lobby space that once held a candy shop and then a bakery is now occupied by a bourbon bar. Amidst the modernization, the theater’s restored 100-year-old Kreuzbach baby grand piano is still available to all artists who perform at the venue and is frequently used in shows today.