Montpelier is the historic home and plantation of James and Dolley Madison, the fourth President and First Lady of the United States. The land was originally owned by James’s grandparents, Ambrose and Frances Madison, after receiving a patent in 1723. Thereafter, the Madison family and their slaves cultivated a thriving tobacco plantation for multiple generations. The Georgian-style mansion visitors see today was built in the 1760s and expanded upon in subsequent decades. The plantation became known as Montpelier, possibly named after a coastal city in southern France. Hundreds of enslaved people lived and labored at Montpelier for well over a century, the most well-known being Paul Jennings, who authored A Colored Man’s Reminiscences of James Madison, a historically significant memoir. Montpelier belonged in the Madison family until 1844, when Dolley, a widow, sold the property. In the twentieth century, Montpelier was owned by the wealthy duPont family. Today, James Madison’s Montpelier is owned by the National Trust for Historic Preservation and operated by the Montpelier Foundation. Its 2,650 acres of land encompass the historic mansion, gardens, a 1910 Train Depot interpreting Virginia segregation, the Gilmore Cabin (the first Freedman’s site in the United States), and centers for studying archaeology and the United States Constitution.

The mansion at Montpelier appears as it did in 1820, thanks to a $25 million restoration project by the National Trust for Historic Preservation. Wikimedia Commons. 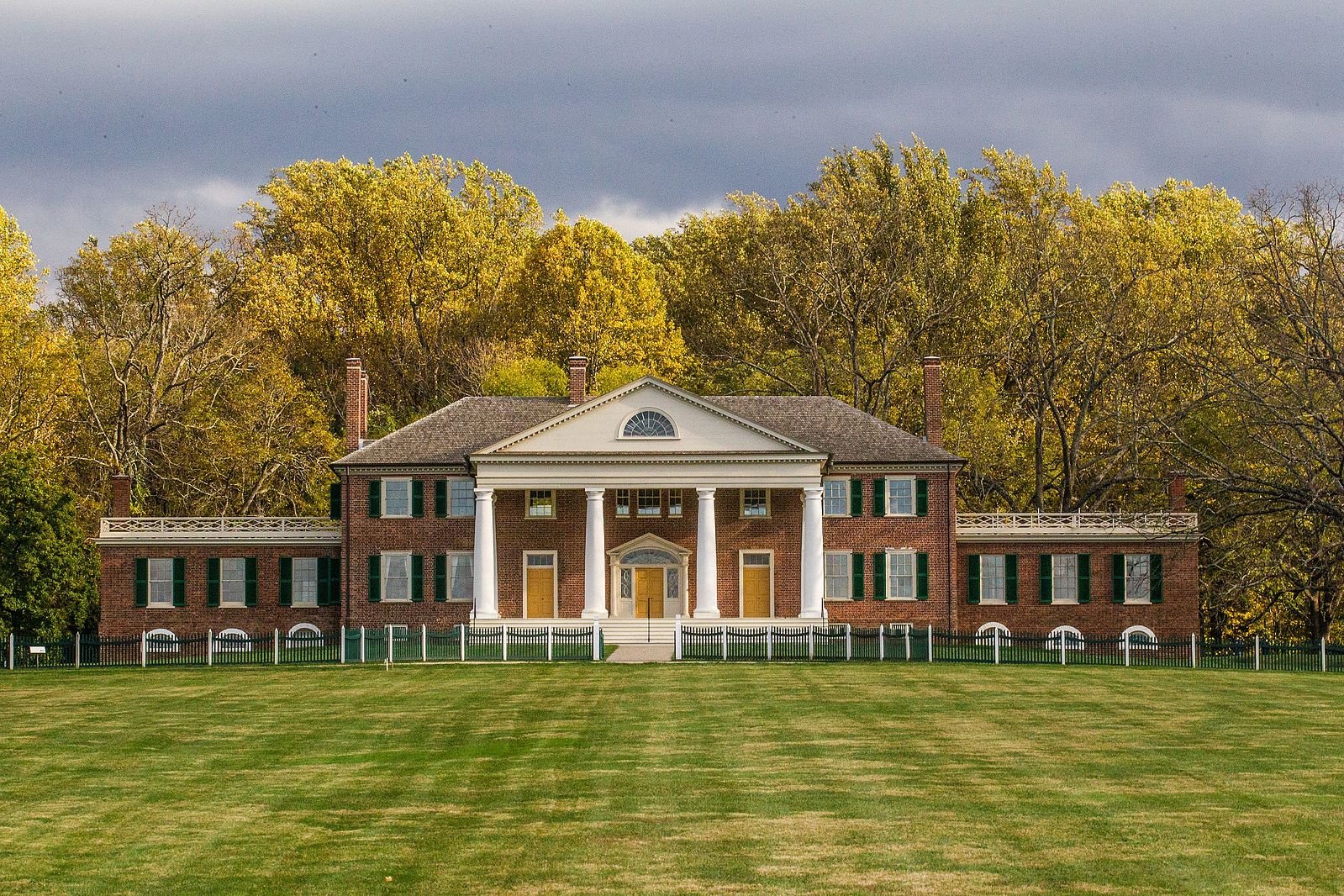 The mansion boasts Georgian-style architecture, popular in colonial and early America. Georgian houses are known for their symmetry, flat facade, and space. Library of Congress. 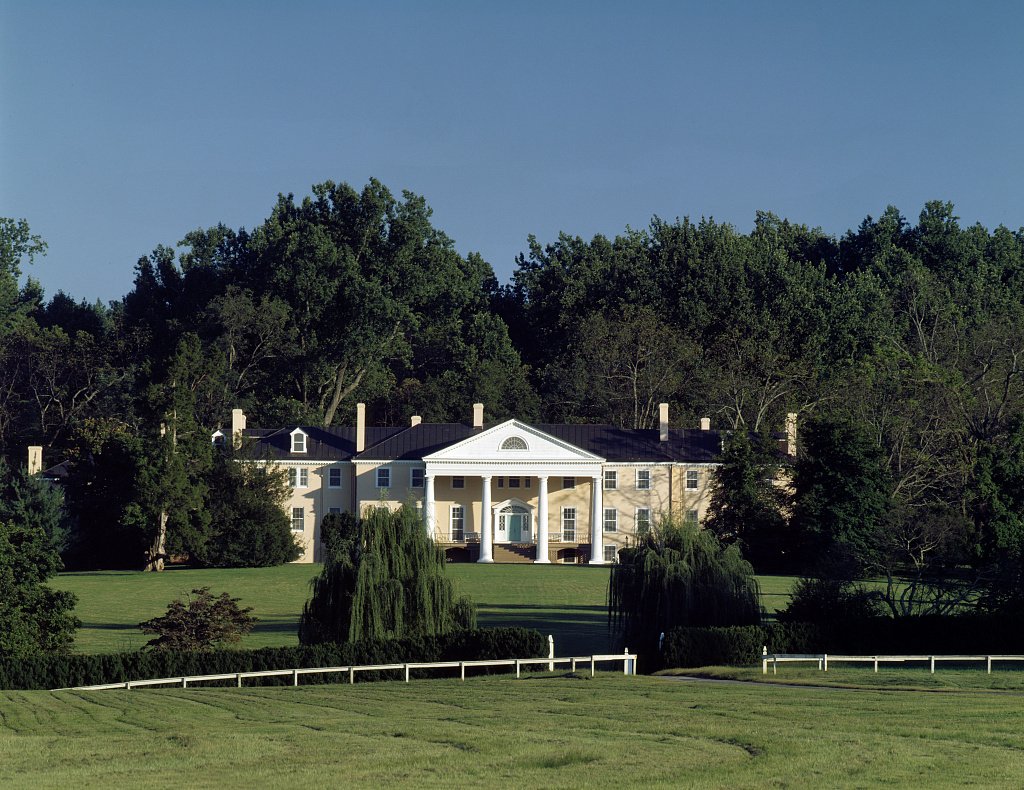 James Madison, known as the "Father of the Constitution," helped centralize the federal government and served as the fourth President of the United States from 1809-1817. Wikimedia Commons. 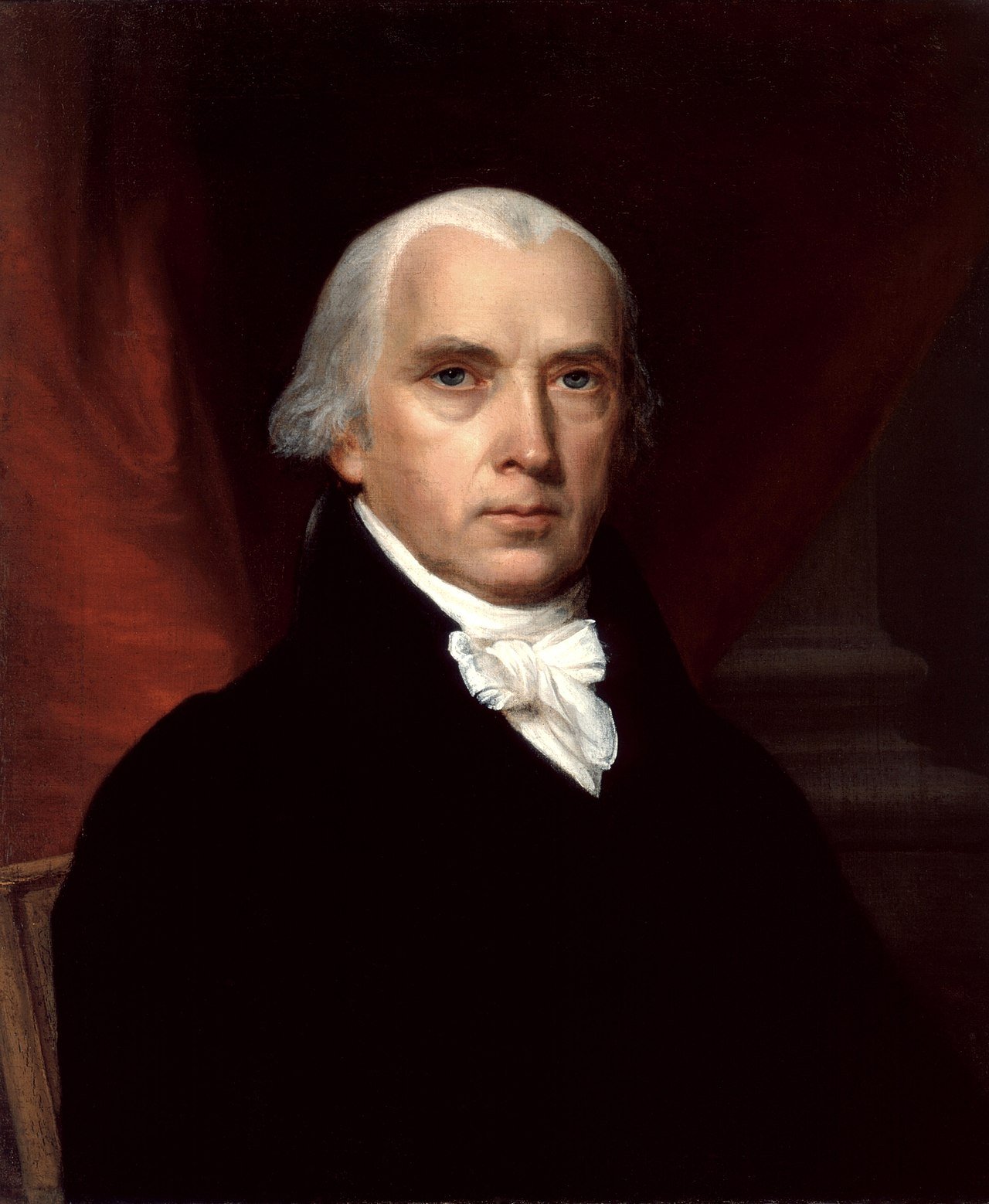 Dolley Madison was the fourth First Lady of the United States, an approachable, social, and elegant figure beloved by the public. Wikimedia Commons. 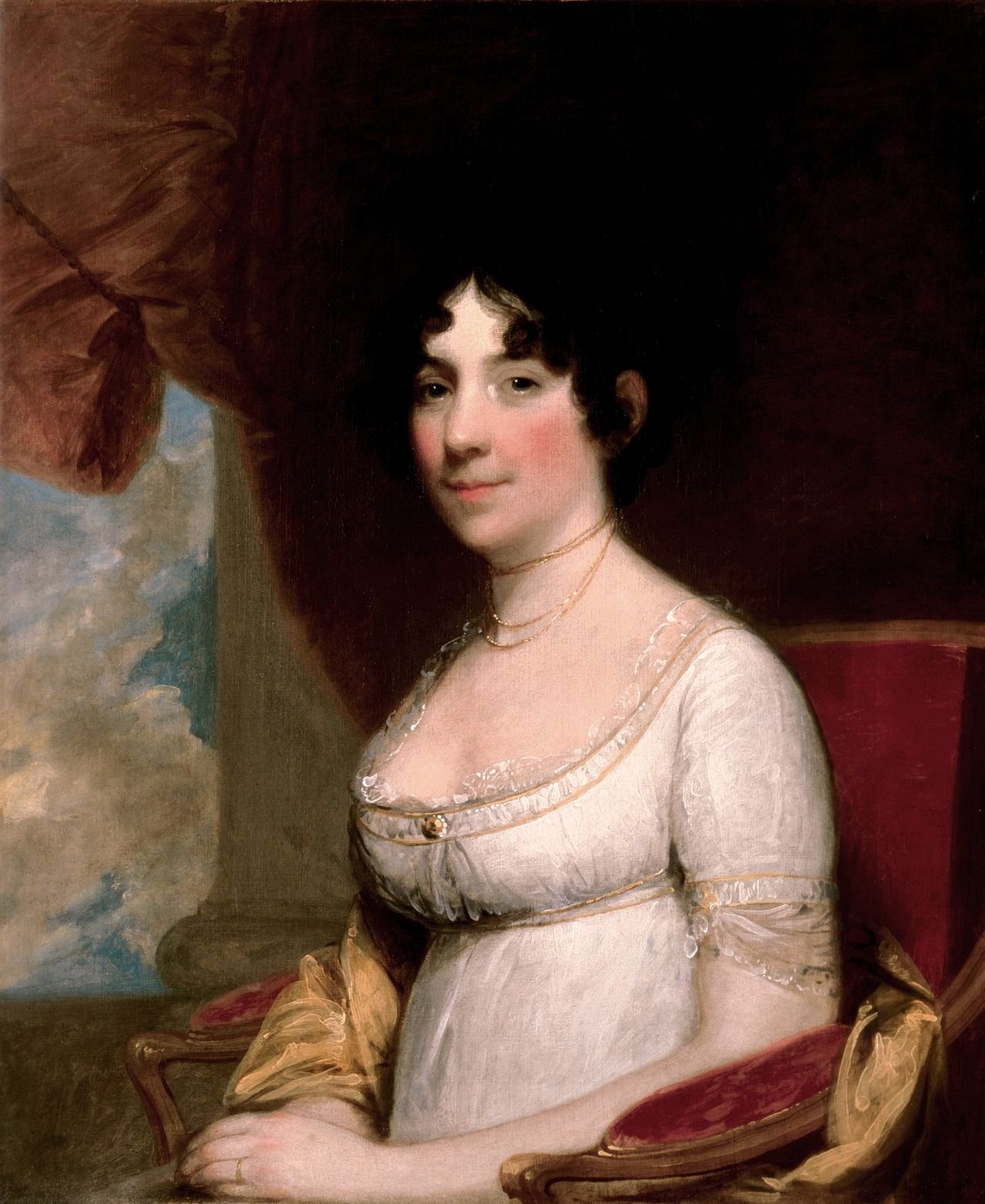 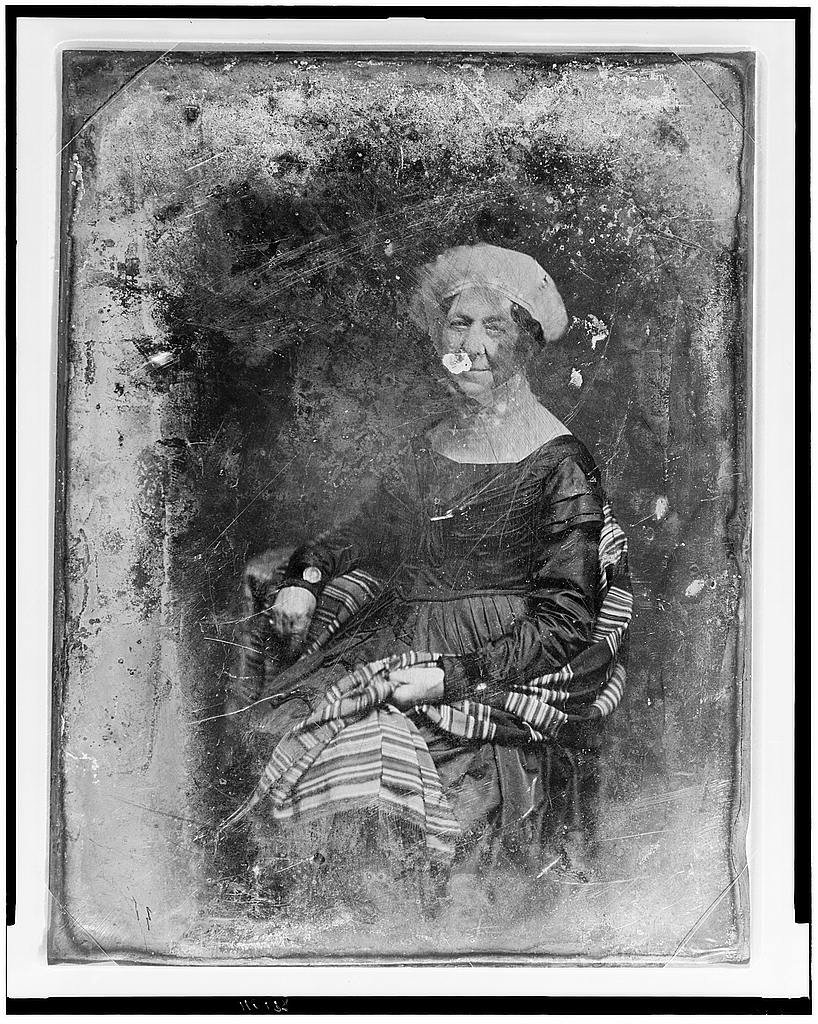 Paul Jennings was a slave born at Montpelier and Madison's personal servant. After purchasing his freedom, Jennings penned a memoir that sheds light on the life of a slave. Wikimedia Commons. 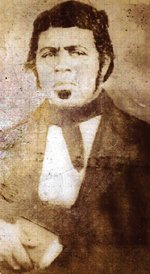 A broze sculpture of James and Dolley Madison at Montpelier. 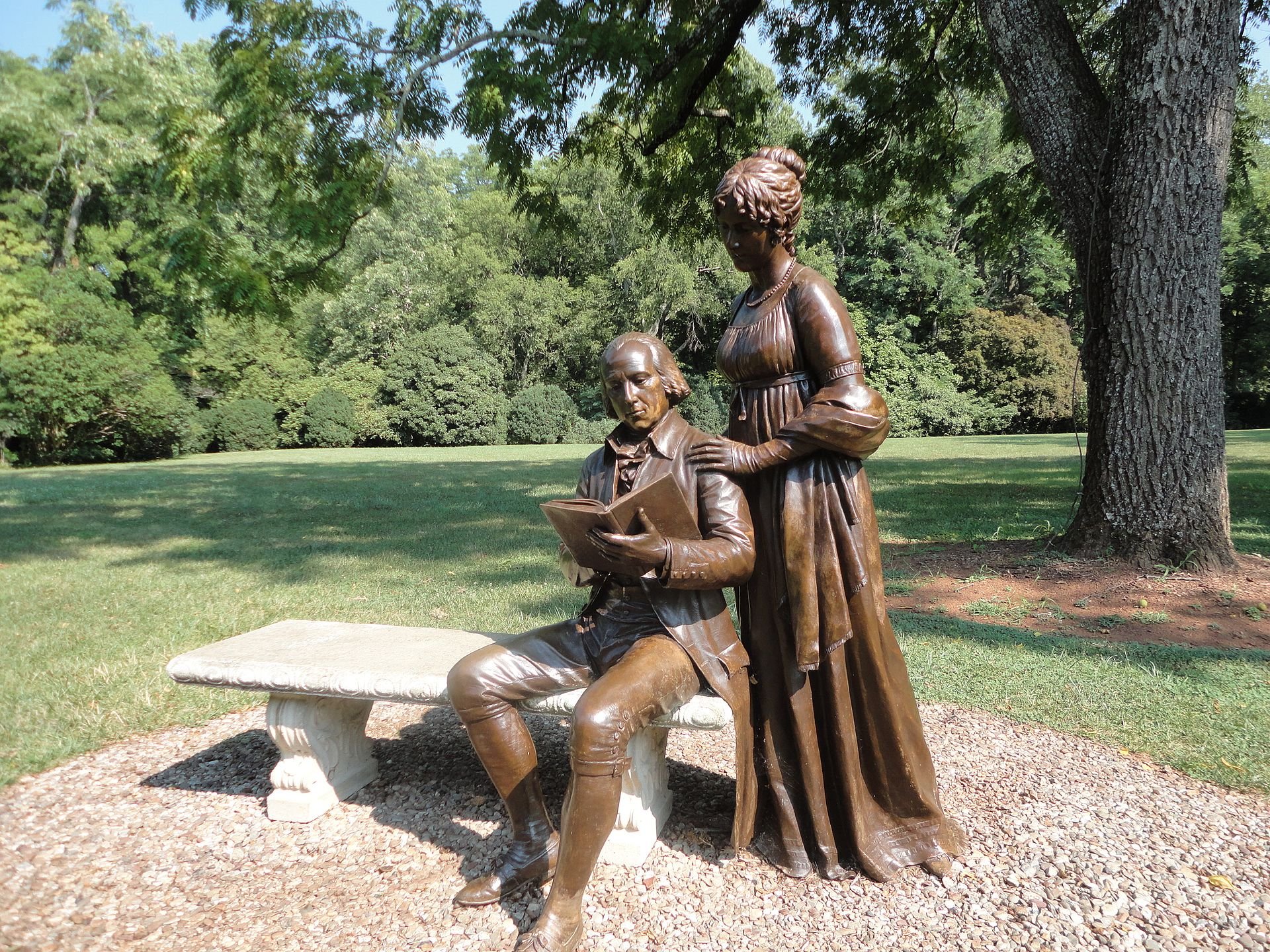 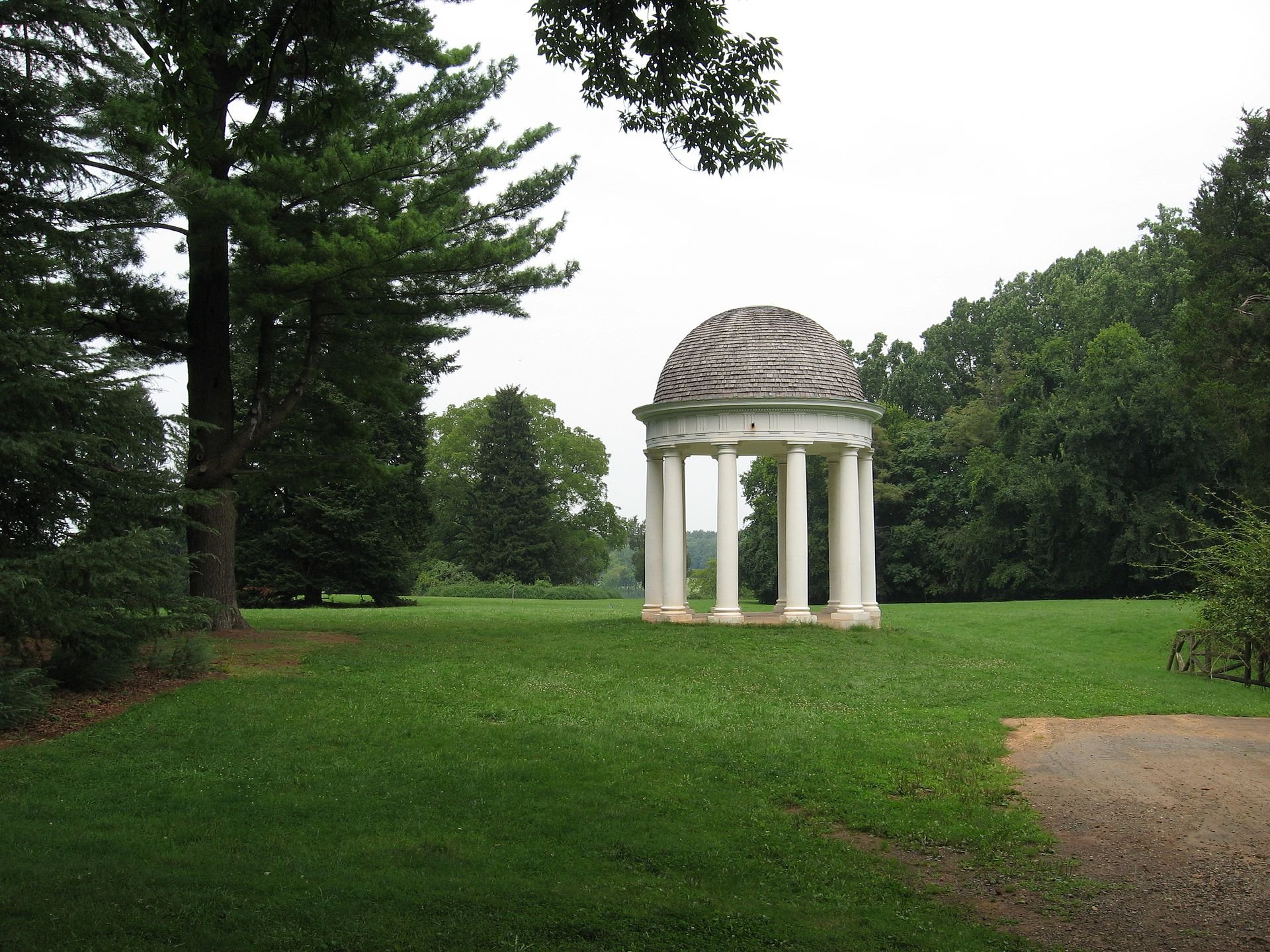 James Madison was buried at Montpelier where he died. He rests in the family cemetery. Wikimedia Commons. 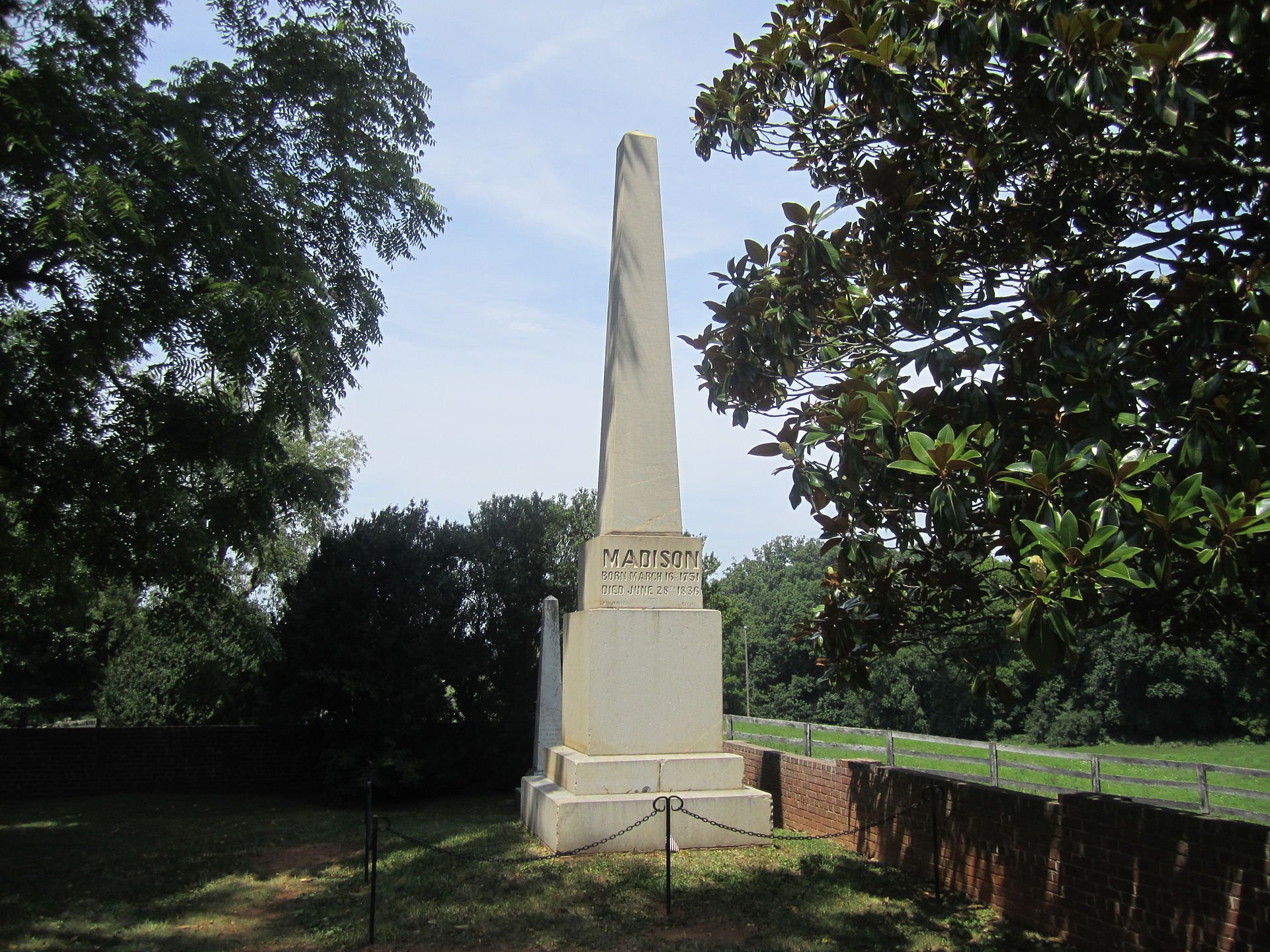 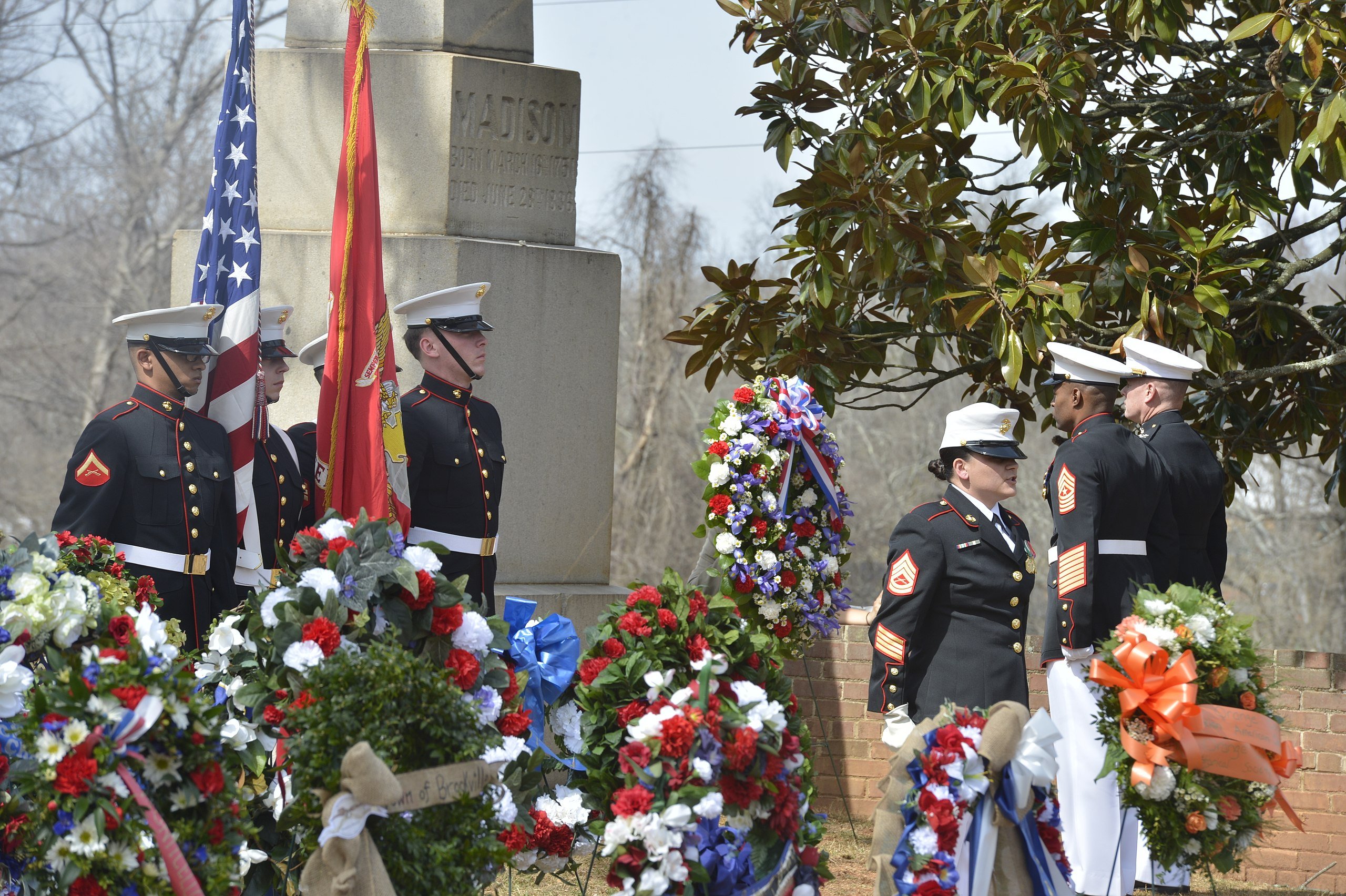 A historic train depot, restored to its 1910s appearance, interprets the history of segregation and Jim Crow in Virginia. Wikimedia Commons. 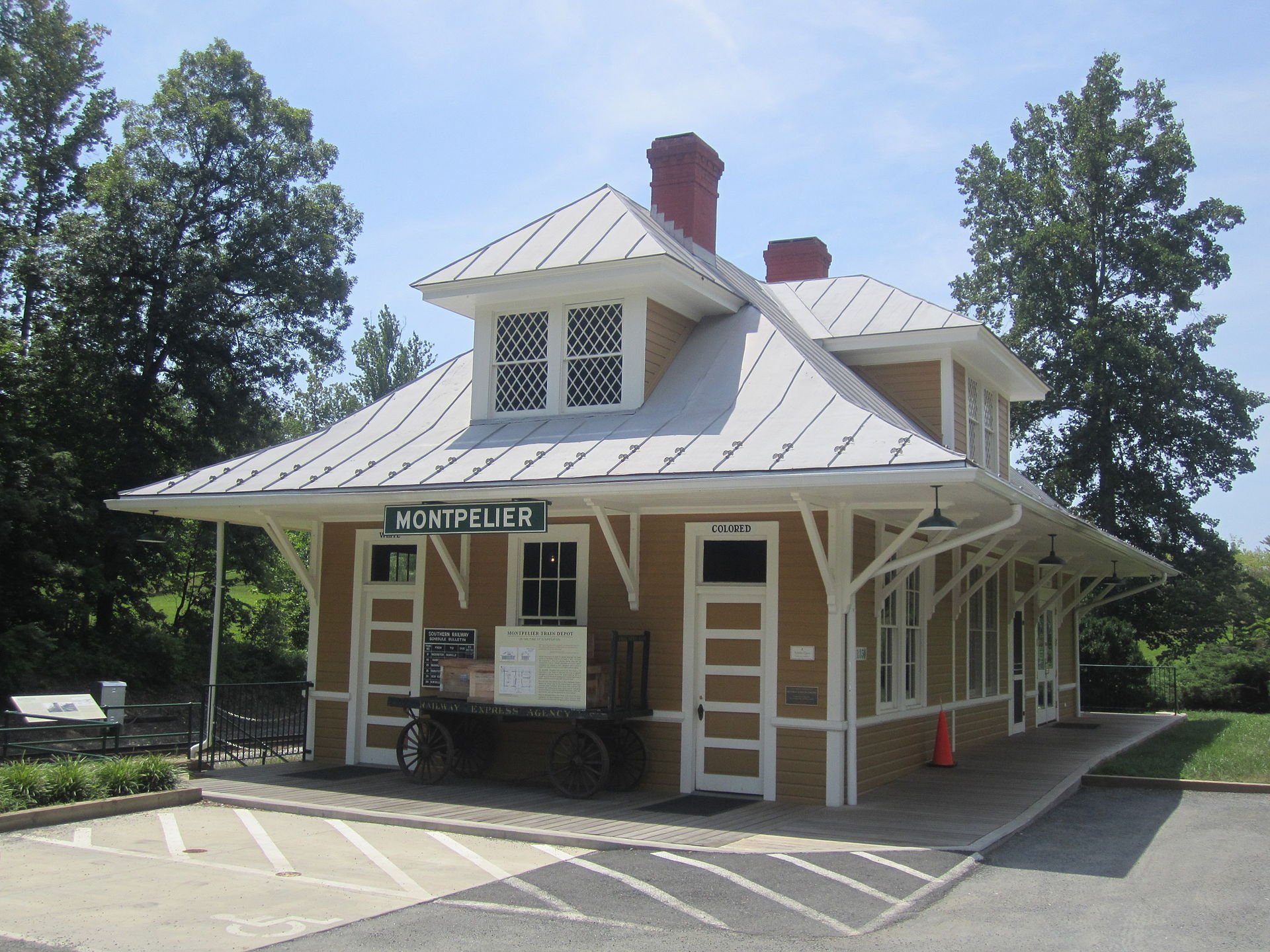 A federal government consisting of three branches: legislative, executive, and judicial. A House of Representatives and Senate to represent the people. A system of checks and balances. These are among the principles of the United States Constitution that James Madison drew up at Montpelier in 1787, before preposing them to his fellow Founders.

In 1723, James Madison’s grandparents, Ambrose and Frances Madison, received a patent for 4,675 acres in Virginia’s Piedmont region, where Frances’s father had conducted an exploratory expedition of the region. Already an affluent and prominent family, the Madisons Their slaves were the first to prepare the land for planting tobacco, beginning a plantation that would further the Madisons’ position in society. After Ambrose’s untimely death, Frances ran the plantation both independently and alongside her son, James Madison, Sr. The plantation, named Mount Pleasant, encompassed dozens of slaves, new crops, a blacksmith shop, a brandy distillery, and a store.

James Madison, Jr., the future president, was born at Belle Grove Plantation in Virginia. His family moved back to Mount Pleasant where he watched the mansion that sits on the property today be constructed. The privilege of his family and status as a white man allowed Madison to study at a prestigious school in King and Queen County and later attend the College of New Jersey, now Princeton University. When the Revolution shook the Colonies, Madison advocated for religious freedom, clarifying its “full and free exercise” according to each person’s choice in the Declaration of Independence. As the American British colonies transformed into their own nation, Madison continued to tend to Montpelier.

Madison is known as the “Father of the Constitution” for imbuing the document and its amendments with his enlightened ideas. In 1787, Madison was instrumental in drafting the United States Constitution at the Constitutional Convention in Philadelphia. His “Virginia Plan” formed familiar components of the federal government we know today, including the three branches of government and a bicameral legislature. While the Declaration of Independence announced the young country’s ideals, it was the innovative structure of government that Madison built into the Constitution that helped makes the ideals a reality. He then promoted this Constitution in The Federalist Papers, a series of essays written with Alexander Hamilton and John Jay. After the Constitution went into effect in 1789, Madison, then a member of the United States House of Representatives, introduced a series of amendments to the Constitution that confirmed and clarified personal freedoms and the scope of government power. These ten amendments form the Bill of Rights. In 1790, Madison, along with Thomas Jefferson and Alexander Hamilton, agreed to have the federal government pay the states’ debts and place the seat of government in what became Washington, D.C.

While Madison’s career as a statesman flourished, he married Dolley Payne Todd, a young widow who was a partner for Madison at home and in the public sphere. When Madison began serving as Thomas Jefferson’s Secretary of State, his father died and he inherited Montpelier, all his possessions, and over 100 slaves. Over the next few years, Madison operated Montpelier with Dolley and dealt with political struggles between Britain and France and the Louisiana Purchase, which more than doubled the size of the United States. From 1809 to 1817, James Madison served as President of the United States and Dolley served as a beloved First Lady. James and Dolley lived at the White House and most famously escaped the burning of the White House in the War of 1812. After leaving office, the Madisons returned to Montpelier.

Like many of the Founders, Madison’s values of equality and liberty contradicted his ownership of slaves and implicit protection of slavery in the Constitution. Hundreds of enslaved people worked the plantation at Montpelier for generations, their stories coming to light through historical research, archaeology, and oral tradition. According to Montpelier’s website, the names of around 300 slaves are known thanks to letters, records, and the memoir of Paul Jennings, a slave who was positioned as James Madison’s personal servant both at Montpelier and the White House. Jennings, under the direction of the First Lady, also had a hand in saving a famous portrait of George Washington from the burning White House. Montpelier’s exhibit “A Mere Distinction of Colour,” explores the history of slavery at the plantation and its lasting effects on American society.

James Madison died at Montpelier in 1836, considered the “last of the Founding Fathers” to pass away. Dolley, struggling with the debts of her son from a previous marriage, sold Montpelier and lived in Washington, D.C. The property passed through several hands in the late nineteenth century until acquired by William duPont in 1901. The duPonts grew into one of the wealthiest families in the United States thanks to their successful gunpowder manufacturing company. The duPonts expanded upon the mansion and founded an annual horseracing competition at the property in 1934, which still occurs today. In 1983, Marion duPont bequeathed Montpelier to the National Trust for Historic Preservation and $10 million in funds to restore the estate to Madison’s time.

Today, Montpelier is open to the public, with tours offered at the historic mansion along with the 1910 Train Depot, which interprets segregation in Virginia, and Gilmore Cabin, the first Freedman’s site in the United States. Visitors can also explore exhibits and galleries the history of the Montpelier and walk more than eight miles of trails on the property. Archaeological research takes place at the site, often involving the public. The Robert H. Smith Center for the Constitution at Montpelier also engages professionals, including teachers and law enforcement, with understanding the United States Constitution.

“Bronze Statues of the 4thPresident and his wife at Montpelier.” Photo. July 2012. Wikimedia Commons. Accessed May 2018. https://commons.wikimedia.org/wiki/Category:Montpelier_(James_Madison_home)#/media/File:Statues_of_James_and_Dolley_Madison_at_Montpelier_2012.jpg