The first courthouse in Columbia, Kentucky, was built in 1806, and it served a growing population. As the town grew, this Victorian-style courthouse replaced the original building in 1886, after the Adair County Fiscal Court ordered its construction in 1884. This courthouse was built on the same sight as the first courthouse. The four-sided clock tower is a city landmark. The courthouse is on the National Register of Historic Places, and is one of the best-preserved of the late-1800s Kentucky courthouses. Columbia, located in Adair County, was settled around 1800 - the county itself being founded in 1801 - on Russell Creek, which is a principal tributary of the Green River. 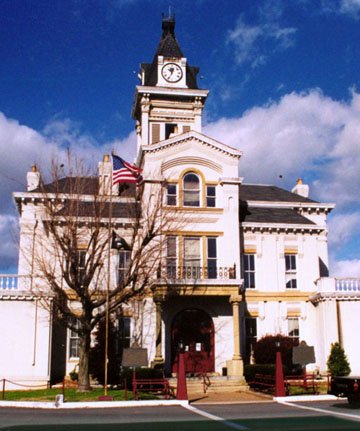 In addition to the architecture, the courthouse is historically significant for some of the lawyers who trained and worked here. One of those attorneys, Frank Wolford, created the First Federal Cavalry in Kentucky in 1861. This Union cavalry defeated the men under Confederate Gen. John Hunt Morgan during the Civil War. Wolford returned to the area and ran for the Senate following the war.

Another notable individual who practiced law here was James R. Hindman, captain of the 13th Kentucky Infantry who also served the Union during the Civil War. In the 1870s, Hindman led the fight to re-enact the local option in Columbia, making this the first municipality in the state to banish saloons. In 1883, Hindman was elected Lieutenant-Governor of the State of Kentucky.

The courthouse, a Victorian-era building, was designed by the McDonald Brothers, a Louisville, Kentucky, firm, and built by William Henry Hudson. Hudson was so proud of his work that he had his portrait carved in a capital on the porch. It is a mixture of architectural styles and elements; there are Victorian and New Grecian elements. Like many other courthouses of the era, it's located on a central city block, approached by major streets on all sides. It has many prominent façades and a pyramidal overall massing that allows it to dominate the cityscape.