The Bannock War resulted from land disputes between the Bannock Indians and American settlers in 1878. The Bannock tribe had been granted the right to keep some of their ancestral lands in this treaty, but many settlers disregarded their claims and continued to move deeper and deeper into Bannock territory. After the US Government ignored the complaints from the Bannock tribe, some of the tribal leaders began to retaliate. In response, the US Army sent troops to this area and a small war lasting from June into August of 1878 ended with the Bannocks being forced to return to their reservation and accept the loss of their land. 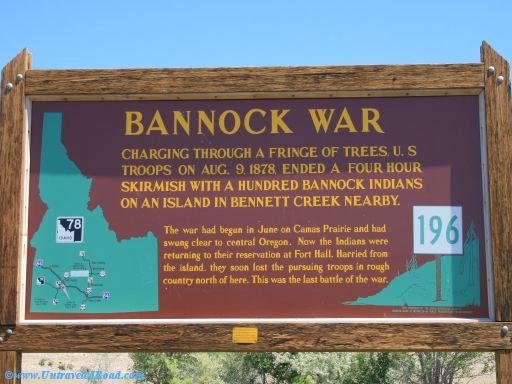 For Native American tribes in the Northwest United States, one of the most important food sources was camassia quamash, known as camas. This plant was eaten raw or steamed and provided a good source of nutrients for the tribes. With Americans infiltrating their hunting grounds, the food supply in the southern Idaho region began to diminish. One of the main food sources for the Bannocks tribe was camas from the Camas Prairie.

The Bannocks were allowed to retain some of their lands in a treaty, but over time, more settlers arrived and disregarded the terms of the treaty. As a result, the Bannocks were constrained to the Fort Hall Reservation where they faced food scarcity. After American ranchers had let their cattle graze in the Camas Prairie, the Bannocks declared war on the people they viewed as invaders on land that was their according to treaty.

On May 30, 1878, Chief Buffalo Horn and 200 warriors raided a group of settlers and took food and other resources. The chief led a second attack on June 8th at South Mountain, Idaho where he and his warriors faced 26 local militia. Chief Buffalo was wounded in this skirmish, but the war party decided to keep fighting through Idaho and neighboring states. Area settlers began to form militias for protection against the raiders and several skirmishes resulted in the deaths of settlers, American soldiers, and Bannocks warriors.

As US troops arrived in the region, the Bannock's were unable to secure more men and supplies to match the growing force against them. With their warriors exhausted and facing dwindling supplies, several tribal factions broke off and left the area in hopes of finding a new land where they might retain their traditional life. Others abandoned the fight and returned to the Fort Hall Reservation. In response to these skirmishes, the federal officials created stricter laws that severely limited the opportunity to leave the reservation.