The Log House Museum is located in a renovated turn-of-the-century log structure which once served as a carriage house, or stable, to the Fir Lodge. The Fir Lodge was one of the first year-round homes built on Alki Beach and was owned by prominent Seattleites, William and Gladys Bernard. 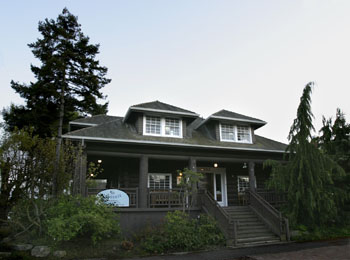 Mr. Bernard had established the city’s first soap company, Seattle Soap Co. and his wife Gladys was known for her devotion to children’s charities, especially orphaned children. After several summers of camping at Alki, the Bernard’s decided to put down permanent roots as year-round residents. In 1902 they announced plans to construct a unique log house combining the attributes of a summer cottage with a thoroughly modern home. The Fir Lodge was typical of the Rustic Style which was popular at the turn of the century. Today, the Fir Lodge survives as the Homestead Restaurant.

Three years after building the Fir Lodge, the Bernard’s decided to sell their comfortable Alki estate and move back to Seattle. Gladys recalled that it was the separation from the city that made life at Alki difficult. “Servants were hard to keep because we were so far out,” she said, ‘and we couldn’t stay in town at night because the ferry stopped running. When the tide was out we couldn’t come home.” Their young daughter Marie attended a school in Seattle and made a rather lengthy boat commute to school each day. The advent of streetcars made quiet Alki Beach much more accessible to beach-goers, turning the beach into a lively resort area. And Luna Park’s crowds and loud nightlife added to the congestion and to the lack of privacy and tranquility that the once out-of-the-way beach community prized.

In June 1907, the Fir Lodge was purchased by the Seattle Auto and Driving Club, an organization of auto enthusiasts who planned to use the lodge as a place for their club members to rendezvous after the long drive from Seattle. In subsequent years, it was a boarding house, a Veteran’s home, and finally the Homestead Restaurant. Around 1908, the carriage house was moved from its original location on the estate, approximately 100’ NW of here, (in the center of the street.) It is believed that when the city put in West Seattle’s streets that this building was moved, to make way for Stevens Street. At that time, the foundation was probably added and the building converted from a stable to additional living spaces. The upstairs of the carriage house is believed to have originally been a hayloft and the space above the inside of the front door was its opening.

This old building, which is built of Douglas fir logs, has been a home to various Alki families for most of the past 90+ years. At one time it even housed an antique store.

The carriage house was purchased by the Southwest Seattle Historical Society in 1995, restored, and converted into the Log House Museum. The restoration was made possible through a grass-roots fund raising effort which raised over $875,000. The Log House Museum has been open since November 13, 1997, the 146th anniversary of the landing of the Alki party on Alki’s beach. The landscaping is all done with native planting. A granite and marble donor circle adorns the courtyard in tribute to the many people who helped make this heritage project an award-winning facility and a community treasure.1