Fort Gratiot Lighthouse was the first lighthouse in the state of Michigan, and is now considered Michigan's oldest lighthouse. Today, a Coast Guard station and our lighthouse watch over one of the busiest waterways in the world. The lighthouse is now open for tours to the public daily. 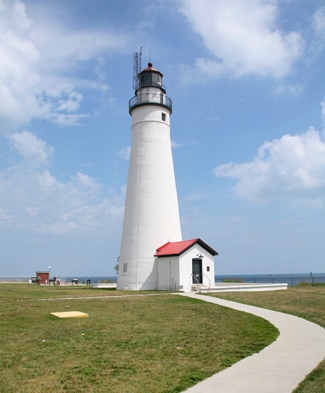 "Established in 1814, military Fort Gratiot, named after General Charles Gratiot, the lighthosue was established to guard the juncture of Lake Huron and the St. Clair River. With a surge of vessel traffic on Lake Huron in the early 1800s, the need for a Light Station to guide vessels through the water way became very important. In 1823 Congress approved the funds to build the first lighthouse in Michigan and the second oldest on the Great Lakes. The first lighthouse in this area was built in 1825 and was located approximately where the first Blue Water Bridge stands. Along with the poor design and construction, the original tower was built in a bad location. During a severe storm in 1828 it collapsed into the river. In 1829, a new lighthouse was built north of the military fort by Lucius Lyon, who later became one of Michigan’s first U.S. Senators. The new location made it easier for ships to spot as they entered the rapids at the head of the St. Clair River. Originally sixty-five feet high, the white painted brick tower was extended to its present height of eighty-two feet in the early 1860s. Today, a Coast Guard station and our lighthouse watch over one of the busiest waterways in the world."