Wilmington's sizable Polish community traces its history to the late nineteenth century, when immigrants --many from the Polish province of Posen--began arriving in the city. Many settled in the Wilmington neighborhood of Hedgeville. In 1891, they formed their own Catholic parish, St. Hedwig's. The church that bears the same name was constructed in 1904. The building is listed on the National Register of Historic Places. 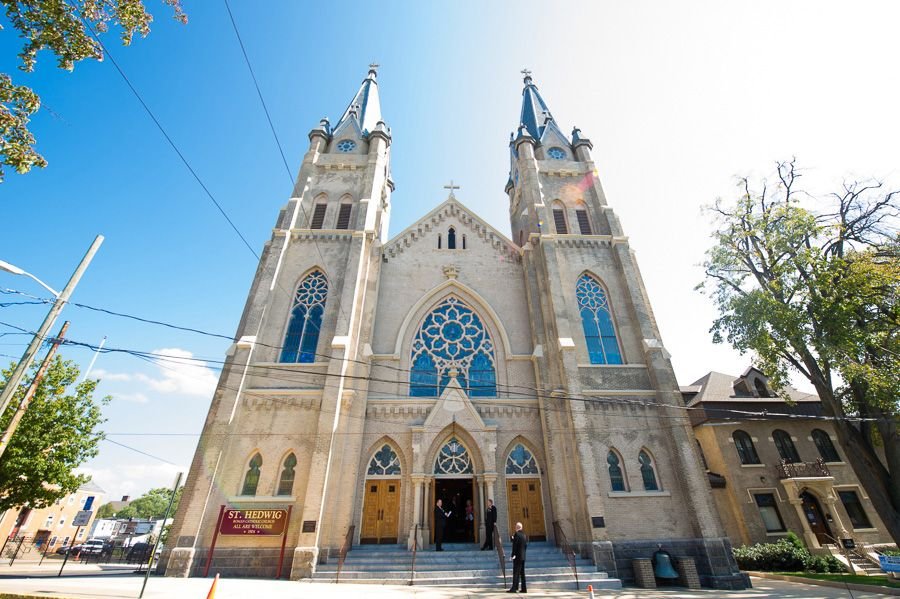 In the late 1800s, millions of European immigrants, many from southern and eastern Europe, entered the United States. Among these were thousands of Polish immigrants who made their way to Wilmington. Many of them settled in the Wilmington neighborhood of Hedgeville. The majority of those newcomers were Catholic and many began attending church in the Sacred Heart Parish on Tenth Street, where a separate mass was said for them beginning in 1887.

As the number of Poles in Wilmington grew, they eventually formed their own parish, St. Hedwig's, in 1891. In the same year, they began construction of a modest church at the corner of Linden and Harrison Streets. The congregation was growing at this point and becoming more prosperous, and the church they built soon became too small.

In 1898, the congregation purchased land across the street from the original church. The new church was not only bigger than the first one, but more elaborate and more suited to the growing prosperity of Wilmington's Polish community. The Gothic Revival structure was built by John Healy and Sons and was constructed in 1904. Among the many people who worked on the construction of the church were parishioners who could not afford to contribute financially and were employed as shipworkers. They helped to place the curbed ceiling beams reminiscent of the hull of a ship.

The striking building with its 80 feet tall twin spires is one of the most recognizable landmarks in the Hedgeville neighborhood. At the time of its completion, it was the largest Catholic church in Wilmington.For much of the 1960s and 1970s, the parish operated St. Hedwig's High School. The school occupied the site of the original church.

St. Hedwig's has been in use since its construction in 1904, and is still a vital part of Wilmington's Polish community. The church is listed on the National Register of Historic Places.