James Cemetery was established by Major John James in 1828 on James Street (now East Broadway) as a family cemetery. The location was originally a Native American burial site and was built around a burial mound approximately seventy feet in diameter and nearly six feet tall. The mound is the only one within Jackson's city limits, but it was originally part of a group of three mounds that formed a triangular pattern. One was a few hundred feet to the northeast and the other, to the northwest. The mounds were built by a Native American people known as the Hopewell who were prominent between 100-400 C.E. The site is no longer an open cemetery and is designated as a local and state historic site. 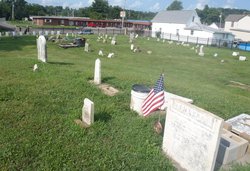 Major John James (1772-1854) arrived in Marietta, Ohio in 1788 and was among the first settlers of the Northwest Territory. Major James's father was a member of Rufus Putnam's Ohio Company. In 1791, John's brother William was one of the twelve killed at the Big Bottom Massacre, the event that started a war between the United States and the Western Confederacy (a united group of tribes that resisted American westward expansion). The massacre was conducted by a group of twenty-five Wyandotte and Lenape warriors against fourteen settlers living in a location known as Big Bottom near Marietta. The war that began as a reaction to the massacre ended with the Treaty of Greenville in 1795 after the Western Confederacy was defeated by General "Mad" Anthony Wayne at the battle of Fallen Timbers. The Treaty of Greenville dissolved the Western Confederacy and forced the native tribes out of Ohio. According to the Wyandotte themselves, they ceded their land at the Treaty of Greenville in order to save their tribe and culture from annihilation. The Western Confederacy was later replaced by a new confederation of tribes, formed by the Shawnee leader Tecumseh, that sought to regain the lands the tribes had lost.

In 1807, Major John James settled in what would become Jackson in 1817. At that time, Jackson was a settlement established around the natural salt licks in the area. The salt licks have attracted animals and people to the region for thousands of years dating back to the last ice age. The salt from the licks was obtained using large boiling operations to boil the brine water away, leaving only the salt behind. The boilers required massive amounts of fuel, and the operation resulted in a great deal of deforestation. The extent of the damage was large enough that the state of Ohio passed legislation that made the licks public property in order to regulate the consumption of natural resources. For a time, Major John James was the proprietor of the salt licks, meaning that he oversaw the leasing of extraction rights to the salt boilers. Later, James became an Ohio legislator and the first treasurer of Jackson County.