Fort Laramie served as a military post in the western Indian Wars from 1849 to 1890. It was originally built with cottonwood logs, as a stockade by fur traders in the spring of 1834 and called Fort William. A replacement structure (Fort John) was built from adobe brick in 1841. Finally, the US Army purchased the structure from the American Fur Company in 1849 and established a military post at this location that was connected to a string of other US Army posts along western trails across the American frontier. Fort Laramie served as a host site for treaty negotiations with the Northern Plains Native American Nations in the mid-1800s. Fort Laramie offers a variety of exhibits and signs related to Native American history, Western Expansion, and laws such as the Homestead Act. Visitors can also learn about the history of the Oregon Trail, the Pony Express and the transcontinental telegraph. Fort Laramie also offers programs and experiences that share the experience of soldiers in the harsh environment of the Northern Great Plains. For example, visitors can explore historic weapons through exhibits and demonstrations, discover the parts and purposes of a mid-19th century wardrobe, experience life within a frontier post through a guided tour, and learn how fur traders acquired lucrative contracts. There are also opportunities to explore area trails and see local wildlife as well as outdoor activities such as hunting, fishing, camping, and hiking.

Established as a trading fort in 1834, this location later became home to one of the largest forts on the American frontier. 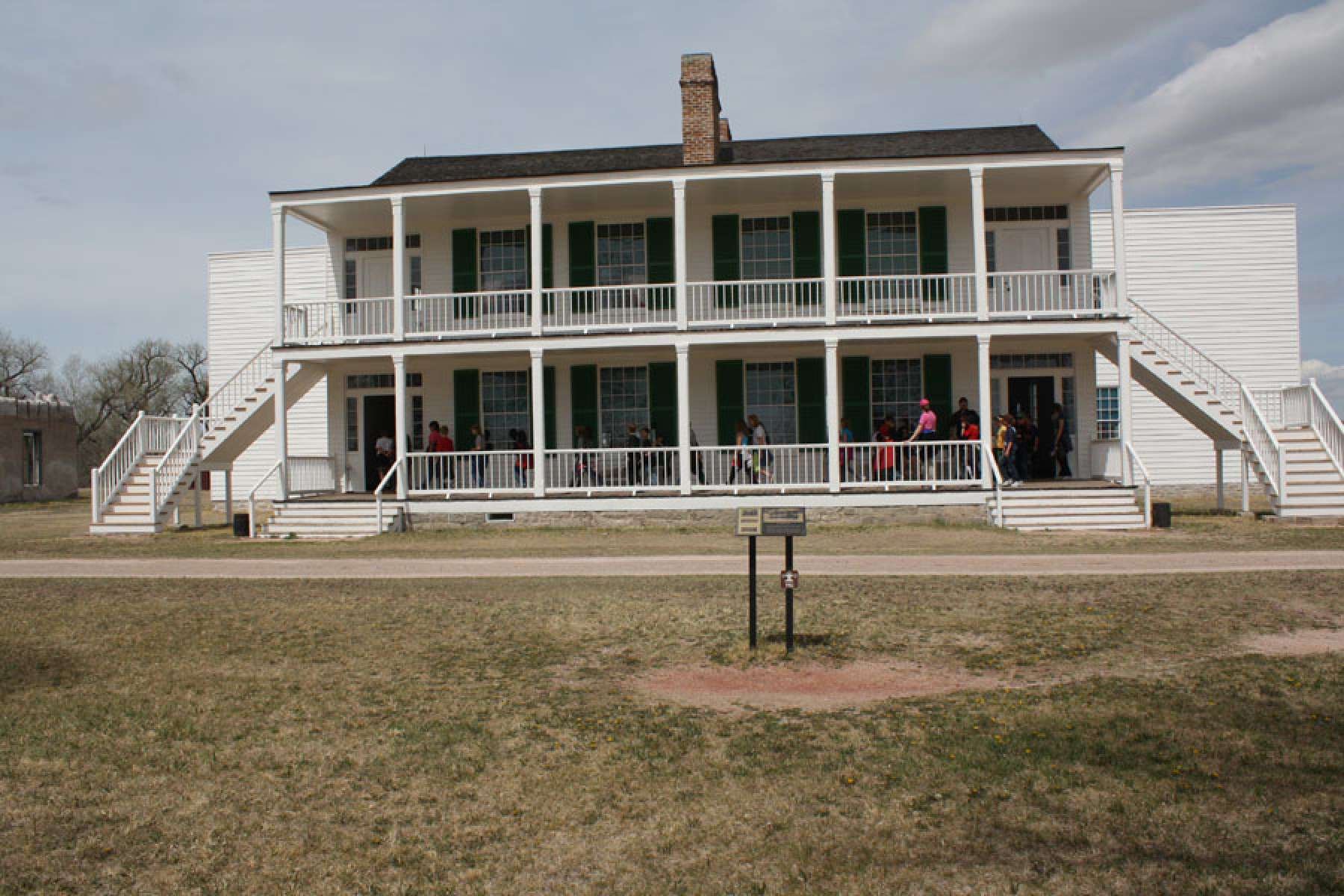 William Sublette and Robert Campbell established the Laramie site (Fort William) in June, 1834, at the junction of the Laramie and North Platte Rivers to begin trade with native American Tribes. It quickly became a strategic geographical hub for the developing buffalo-robe trade which was beginning to replace the beaver-fur trade of that era. The fort's strategic location permitted supply to a vast area of the Central Rocky Mountains, as well as the bison range of the Great Plains. In 1835, Fontenelle, Fitzpatrick and Company purchased Fort William, and then sold it to Pierre Chouteau and the American Fur Company in 1836. It became known as the Rocky Mountain Outfit, and in 1841 it was reconstructed from adobe brick (and called Fort John) in an expansion geared toward keeping up with local trade competition. American military concern for a flood of westbound immigrants traveling the American Frontier caused the US Army to buy the fort  from the American Fur Company in April, 1849. The Regiment of Mounted Rifles moved into the adobe fort to protect pioneer travelers from the increasingly hostile Sioux Indians, and the 41 year military history of Fort Laramie began.

For westbound pioneers on the Oregon Trail, Fort Laramie was welcome site following six weeks on the trail from the last military post or opportunity to purchase supplies. The trail near Fort Laramie was littered with furniture and supplies as travelers once again lightened their wagon-loads as they had done earlier on the trail, this time owing to the upcoming climb through the Rocky Mountains. Many travelers sold their furniture and heirlooms at Fort Laramie for pennies on the dollar. Prices for items sold and supplies purchased reflected supply and demand as there were no established trading posts within 300 miles.

The first major battle of the Northern Great Plains Indian Wars (the Grattan Fight) occurred on a wagon trail near Fort Laramie. The post served as a headquarters for many military campaigns during American westward expansion. The fort also became the meeting place for many area Native tribes as they held Councils at the fort in 1851, 1866, and 1868. The United States Army eventually secured a greater amount of power and land from the Lakota, Sioux, Cheyenne, Arapaho, and other tribes in the area, but not without concessions that reflected the agency and power of these tribes.

In later years, Fort Laramie witnessed the arrival of the open range cattle industry and the decline of the concept of the West as a "frontier" reflected in the US Census removal of that category in 1890, the same year that the US Army abandoned the fort.

The Oregon Trail. Fort Laramie. All About the Trail. . Accessed April 27, 2018. http://oregontrail101.com/ftlaramie.html.