On 9 July 1931 the gates to Memorial Gardens (now Peace Walk) and Victoria Park were presented to the city by Sir Jonathan North in memory of his wife, Lady Kate Eliza North (née Trott). Sir Jonathan was Chairman of the footwear company Freeman, Hardy and Willis, and mayor of Leicester throughout most of World War I. During the war, Lady North worked tirelessly to relieve the suffering of sick and wounded soldiers, earning her the title 'Leicester's Florence Nightingale'. After the war, Sir Jonathan was one of the leading figures in the campaign to establish a University College as a war memorial. 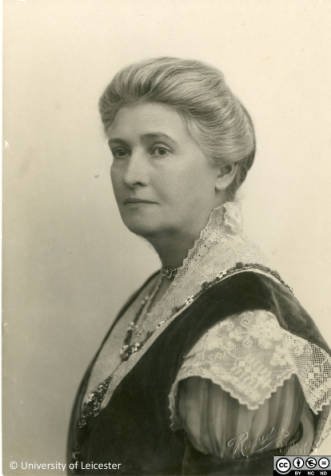 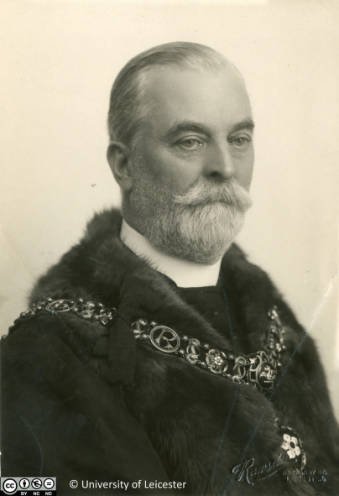 Sir Jonathan North was born in Rothley in 1855, the son of a farmer. In 1879 he married Kate Trott, daughter of a master plumber from Taunton, Somerset. Following a successful partnership as a boot and shoe manufacturer with James Leavesley, Sir Jonathan was chosen by Sir Edward Wood to succeed him as Chairman of Freeman, Hardy & Willis. He combined his business career with active involvement in local politics and philanthropic activities. He was twice chairman of the Leicester Board of Guardians, a Liberal Party councilor from 1897, magistrate from 1907 and alderman from 1909. Having previously declined the Mayoralty, he finally accepted it 3 months into World War I and went on to serve throughout the war. After the end of his term in office, he was a leading figure in initiatives to commemorate the sacrifices of local people and support injured servicemen. He played a prominent role in plans for the Lutyens's Memorial Arch in Victoria Park, raised funds to build the North Memorial Homes for disabled soldiers and sailors in Oadby, and contributed to the appeal to save the YMCA building on Granby Street. He received a knighthood in 1919.

Throughout 1914-1918, Lady North made a significant contribution to local community activities in support of the war effort. She convened a group of 150 women who met daily in the Mayor's rooms to make and repair clothes for the troops and wounded soldiers, and helped to set up similar working parties across the city. It was reported that by 1916 she had over 4,000 workers producing over 2,000 garments a week and repairing many more. Another initiative involved organising a committee to provide the sick and wounded with a free meal at Victoria Park Pavilion. In 1917 she presided over the ladies section of the Bazaar and Festival Committee formed as part of her husband's ambitious scheme to raise £100,000 to help soldiers and sailors disabled by the war.

Both Sir Jonathan and Lady North made significant contributions towards the establishment of Leicester, Leicestershire and Rutland College (predecessor to the University of Leicester). In March 1918, Sir Jonathan convened the first meeting of interested parties to discuss proposals for a University College. When a committee was convened in 1919 to further the idea, he was the obvious choice to become chairman. Once the college had been established, he became the first chairman of the College Council. He contributed £2,000 towards college funds, and secured a further £10,000 from Freeman, Hardy & Willis. In 1921 a committee of local women was formed to organise a Bazaar and Fete to raise funds for the College, with Lady North serving as President.

Presenting the ornate memorial gates to the city in 1931, Sir Jonathan gave the following dedication to his late wife:

My family and I appreciate the opportunity given to us to make these beautiful gates a memorial to one of the best mothers, to a loving and devoted wife. She was always interested in any work that could be done for the good of our city. She served as Mayoress for four long, dark and depressing years of the war, and I might add, served with a personal zeal and devotion such as not only evoked admiration and affection but called others to work, women and children alike.