The tragedy at Hawks Nest Tunnel is considered one of the greatest industrial disasters in American history. When chemical-manufacturing giant Union Carbide commissioned a 3-mile long tunnel through silica-rich Gauley Mountain in 1930, basic respiratory safety procedures were ignored and hundreds of the mostly lower-class African American miners contracted fatal cases of silicosis. The death toll, which is still contested, ran into the hundreds, and space was needed quickly to bury them. Racial tensions at the time did not allow African Americans to be buried with whites, so Union Carbide paid a local farmer for use of his fields as a makeshift cemetery. When the highway came through forty years later, in 1972, the graveyard was relocated and the dead forgotten again--until a local couple stepped in. Through the help of the community and local high school students, the cemetery has been restored and received a dedicated a memorial site in 2012.

Entrance into the cemetery 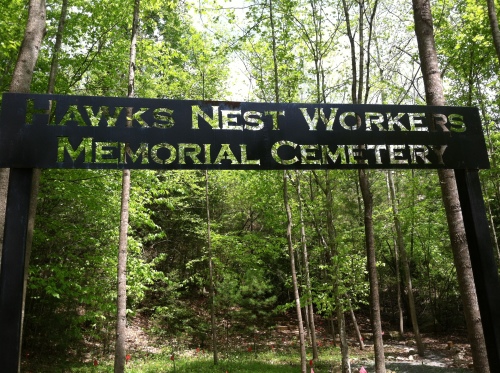 Engraved stone at the memorial 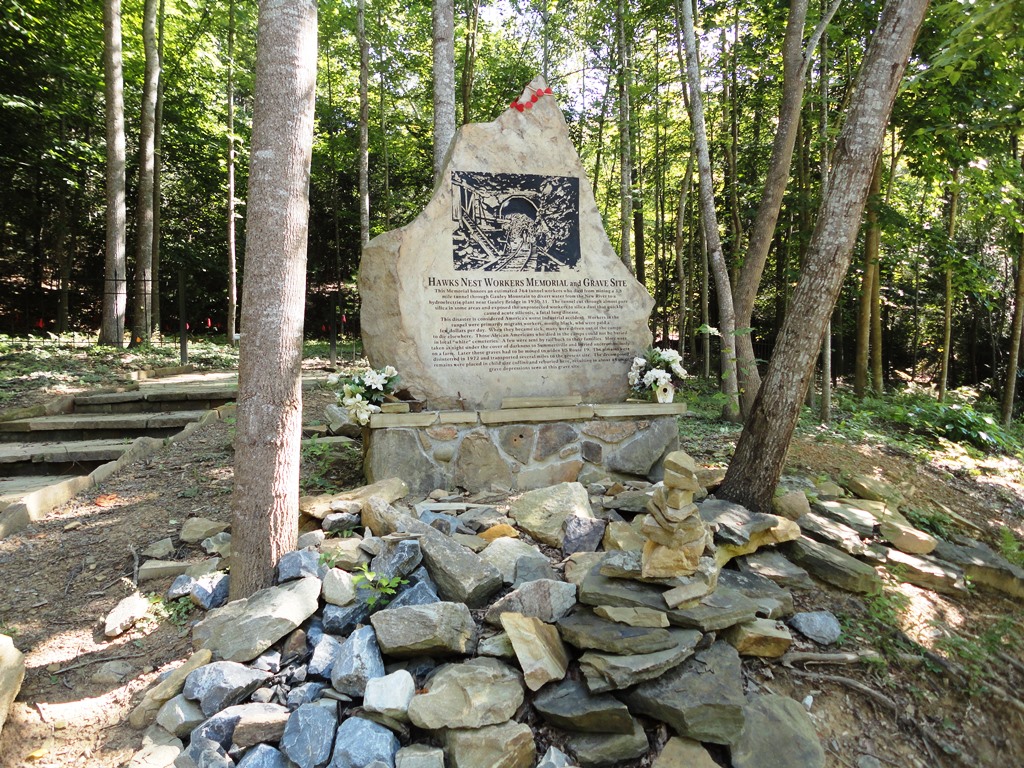 Close up of the stone 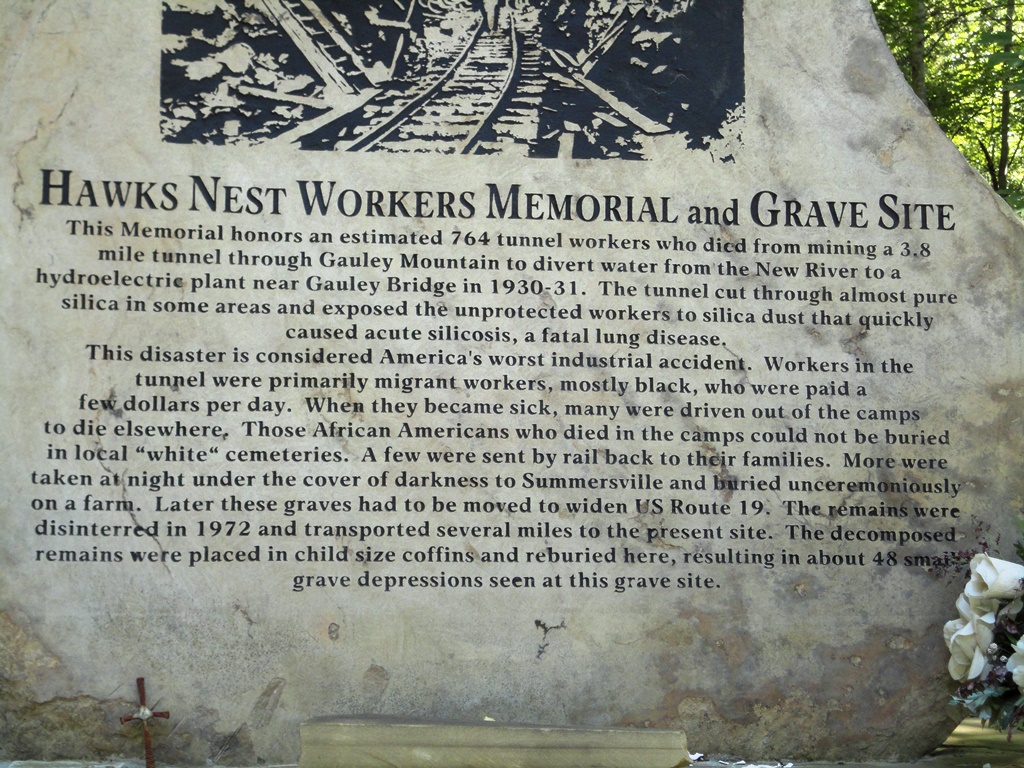 Two of the ministers who dedicated the cemetery. They are pouring water from the New River on the ground. 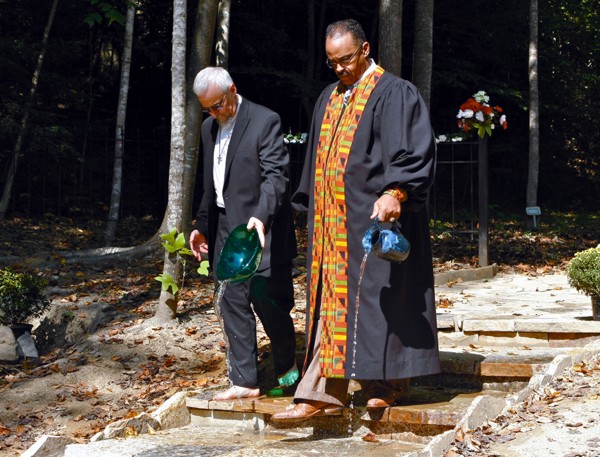 “I used to rabbit hunt over there on the Martha White farm out in the fields before Rt. 19 came through here. I could see the graves. They were little soft mounds of dirt with grass over them. If you were not careful, you could step on one and it would cave in. They were in rows right up and down the fence line. They moved a lot of them when the highway came through. Dug up the graves and took what was left down by Hughes Bridge on the Gauley River to bury them again." -Owen Symes, local resident.

In March of 1930, Union Carbide needed a way to power their metallurgic plant in Alloy, WV. It was decided that water power would be the best bet. There was to be a tunnel, dam, and powerplant built.  The tunnel would be on Gauley Mountain. It was drilled straight through the mountain--not only would it provide power for the plant, it would provide a massive supply of silica for manufacturing purposes. The mountain is pure high grade silica. Lax safety standards led to workers getting sick very quickly. Miners would come out covered in silica dust-a fine white powder that covered everything and would scatter when they changed out of their work clothes.  According to the American Lung Association, “silicosis affects the lungs by damaging the lining of the lung air sacs. Once this begins, it leads to scarring and, in some situations, to a condition called progressive massive fibrosis. This condition happens when there is severe scarring and stiffening of the lung, which makes it difficult to breathe.” This was a known condition in the 1930s.

When miners first started getting sick, it was diagnosed as pneumonia--a determination soon proved false as more miners fell ill and rapidly began to die, suffocated in weeks by the concentrated silica dust saturating their lungs. It soon became a problem with what to do with the deceased. At first, the bodies were thrown in the river and covered by tunnel rock. As miners continued to die, however, this method became untenable. Union Carbide paid the family of a local undertaker in Summersville to bury the deceased on their property--at a rate of  $50 a body.

It was simply known as Martha White farm to the locals. The Great Depression provided a willing, able, and steady workforce who were taken advantage of. The cemetery is for the African American miners who were not allowed to be buried alongside whites at the time. There are 40 men buried in the cemetery.

The gravesite laid almost forgotten until the Department of Highways decided to widen Highway 19 in 1972. This required that the graves be moved. The DOH moved the graves to a site close to Summersville Lake without much fanfare. It wasn’t given any thought by the public, sadly. It quickly became a spot for people to dump unwanted broken appliances and roadkill. It sat unmarked and without caretakers for 40 years--until local couple George and Charlotte Neilan stepped in.

In 2009, the couple prepared a grant application to fund a workers’ memorial. Their first step was finding the site. This is where West Virginia State University professor Richard Hartman stepped in to study DOH maps and more clearly define the location. Once found, it took three years to clean up the site. Local high school students aided in the efforts, and soon the rest of the community began to contribute. A fence and steps were built, and applications were made for a  historical marker for the long-forgotten memorial.

On September 7, 2012, a dedication ceremony was held to recognize the miners and the community’s tireless restoration. Held at Old Main Auditorium in Summersville, the event was attended by politicians, historians, community members, and three noted reverends.  The names of all known miners buried in the cemetery were read off, though many remain unidentified, and each of the three ministers consecrated the ground. A monument was also dedicated to memorialize the names of the deceased miners. Rev. Ron English of the First Baptist Church of Charleston eulogized the event by saying, “Four words pivot around the purpose of our gathering: celebration, commemoration, commendation and correction,” further elaborating that it is the duty of the present to celebrate the lives of those men lost, commemorate them through the new markers and memorials, commend the dead for their sacrifice, and correct the tragedy that they were buried in unmarked graves.