The small gated court in Boston’s Beacon Hill neighborhood known as Rollins Place offers a stunning optical illusion painted among the red brick rowhouses. At the end of the road, visitors will get a glimpse of Scarlett O’Hara’s house from Gone with the Wind. Of course, this “house” is a three-dimensional painting created to appear as if the Southern home of Scarlett O'Hara had been transported north and the painting was designed as a clever way to cover an eyesore. The gate is usually closed, and a closer inspection of the painting is off-limits to the public, but this small "house" remains one of the hidden gems of Beacon Hill. 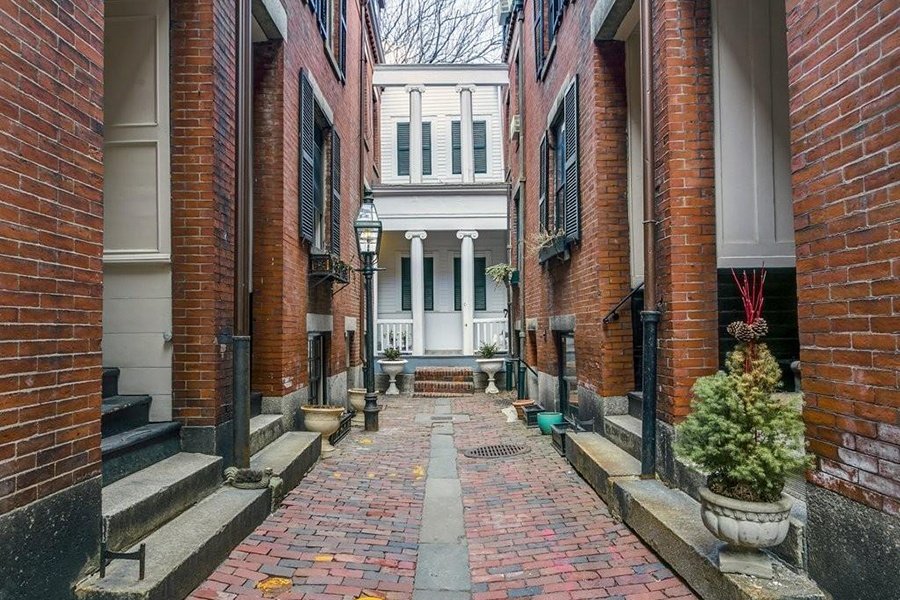 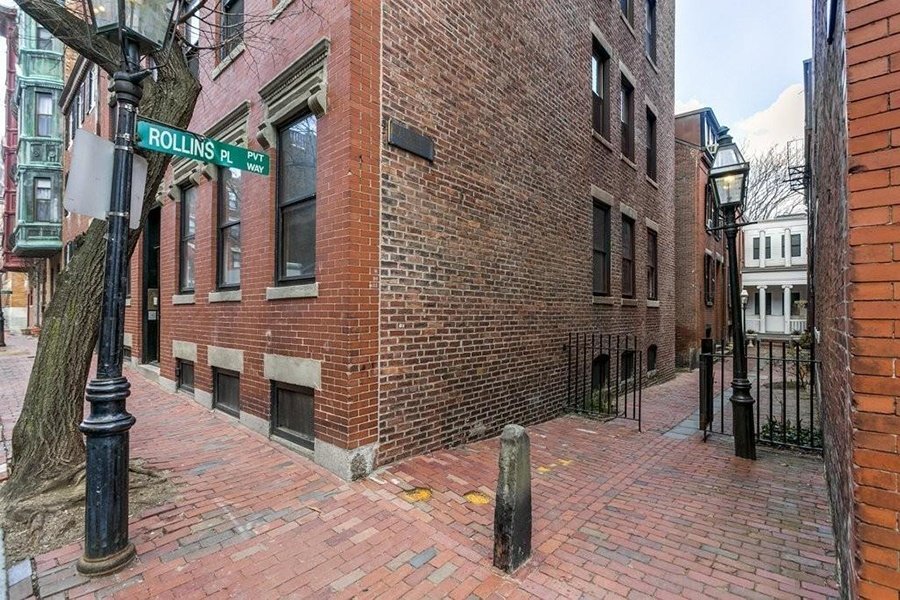 There are many interesting pieces of public art decorating the landscape throughout Greater Boston. One very intriguing example is the Scarlett O’Hara House buried in the Beacon Hill neighborhood. It is located at the end of a small, private way. The opening to the short dead-end path is on Revere Street, which runs from Storrow Drive to Irving Street. There are only about three brownstones on either side of Rollins Place. At the end of the street, there is a large concrete structure that terminates the roadway (the side of an apartment building which fronts on Garden Street)

The “house” at the end of the cobblestone road was painted onto the building. It depicts a white, two-story, columnned Greek-revival home resembling the classic manor from Gone with the Wind. This type of optical illusion-type art is called a Trompe-l’oeil painting.  Trompe-l’oeil is defined by Dictionary.com as a word of French origin, meaning: “visual deception, especially in paintings, in which objects are rendered in extremely fine detail emphasizing the illusion of tactile and spatial qualities;” or “a painting, mural, or panel of wallpaper designed to create such an effect.” The purpose of Scarlett O’Hara House painting is to decorate an old brick and concrete wall. The optical illusion gives the the impression of another well-kept home on the private way.  Trompe-l’oeil paintings are rare but very intricate paintings found throughout the world.

The three-dimensional painting is embellished with a shallow porch. However, the porch itself is a faux façade.  It doesn’t lead into the “house” at the end of the way; rather, there are two small entryways on either side that lead into the homes on Rollins Place. Unfortunately, there is very little information available online as to who was responsible for the painting and when it was created. As of the time of this article, 3 Rollins Place was on the market for nearly $1.5 million.

The 1939 film, Gone with the Wind, quickly became one of the most beloved classics in American movie history. While the film offers a romantic view of the South and a nostalgic interpretation of the "Old South," the film and the book upon which it was based offers a white supremacist view of history. The film takes place during Reconstruction and presents the view that former slaves were incapable of citizenship. This interpretation might seem troubling enough on its own, but it is also the premise used by contemporary terrorist organizations such as the Ku Klux Klan. The Klan justified their violent actions to terrify and intimidate Black officeholders and Black voters.

The following is one of many examples of Gone With the Wind's depiction of African American citizenship after the Civil War as a mistake:

Aided by the unscrupulous adventurers who operated the Freedmen's Bureau and urged on by a fervor of Northern hatred almost religious in its fanaticism, the former field hands found themselves suddenly elevated to the seats of the mighty. There they conducted themselves as creatures of small intelligence might naturally be expected to do. Like monkeys or small children turned loose among treasured objects whose value is beyond their comprehension, they ran wild --either from perverse pleasure in destruction or simply because of their ignorance.

For most white readers during the mid-20th century, the book and film was simply a romantic tale about the beautiful Vivien Leigh, played by the young Scarlett O’Hara in the 1939 film. Scarlett lives with her family at their southern plantation, called “Tara,” during the American Civil War and Reconstruction period. The bulk of the story follows her turbulent love life during this time, but there are many instances of racist language and the book presents the idea that life was better for white and Black alike before the Civil War. The painting at the end of Rollins Place was inspired by her Southern, Greek-Revival style home portrayed in the film.

The "house" can be seen from Revere Street, but it is on a private, gated way and not open to the public.