On October 23, 1882, an African American man named Charles Thurber was accused of committing sexual assault in a rural area nearly thirty miles south of Grand Forks, Dakota Territory. He evaded capture by local authorities until that night, when he was then brought to the Grand Forks County jail. The next morning, a mob of white residents from Grand Forks and the surrounding area stormed the building, sprung Thurber from the jail cell, and brought him to the Grand Forks Rail Bridge that spanned the Red River. A little past 4:00 PM October 24, 1882, the mob wrapped a noose around Thurber's neck, attached to the bridge, and pushed him off. No individuals were indicted in the murder. 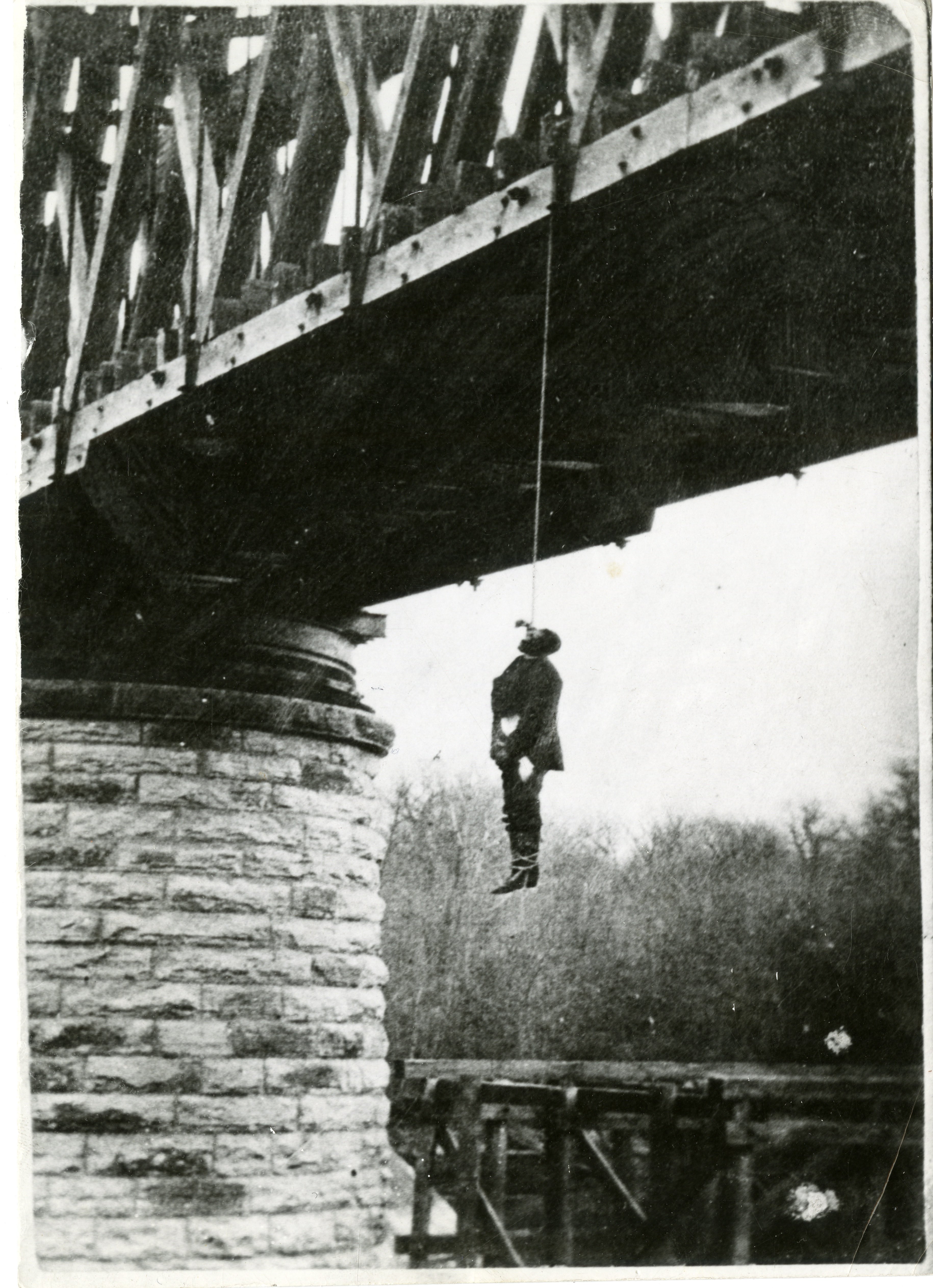 In 1882, the year of Charles Thurber’s lynching, North Dakota had not yet gained statehood; rather, it was part of the Dakota Territory. Grand Forks had only been founded a little over ten years before the murder, but the “Great Dakota Boom” was in full effect by the year 1882.[1] As a marker of its growth, the Red River Valley Railroad Company built the railroad bridge that spanned from East Grand Forks, Minnesota into Grand Forks, Dakota Territory in 1879; that same year, the Manitoba Railway Company under the direction of James J. Hill bought the company and the newly constructed bridge. With a bridge spanning the Red River, goods could now be easily transported across territorial lines, thus bringing a sense of “civilization” to the town.[2] By 1880, two years before, the population of Grand Forks reached 1,705 individuals, but of this number, only two were African American; five years later, the population of African Americans rose over fifty inhabitants due to the massive amount of migrating individuals into the territory.[3] While Grand Forks was relatively new, the city had an established police force and the surrounding county had a sheriff’s department with numerous deputies. The murder of Charles Thurber by the hands of a mob shows the impact that racial differences had on the residents of Grand Forks in 1882 in terms of dispensing vigilante justice.

On October 23, 1882, Charles Thurber was arrested in East Grand Forks, Minnesota for allegedly sexually assaulting two women eight miles west of Norton (now Buxton)- a town itself located about thirty miles south of Grand Forks, ND. Since the crime occurred in the Dakota Territories, Thurber was returned back to Grand Forks law enforcement and placed in the city jail, which was located in the newly constructed city hall, located downtown. After hearing about the alleged assaults of the African American Thurber on two white women, many individuals in Grand Forks became outraged, concluding that vigilante justice should be served and Thurber should be lynched. After a failed attempt at storming the jail and releasing Thurber, the crowd dispersed until the next day. Around 2:30 in the afternoon on October 24, 1882, after being taken out of city hall surrounded by numerous law enforcement officials who were protecting Thurber, a crowd began to gather and follow the procession towards the Grand Forks County courthouse at 124 S 4th Street. Soon after the declaration that the hearing would have to be delayed due to the judge presiding over the case not being prepared, the mob that had gathered stormed up the back stairs of the courthouse. A melee occurred, and the mob released Thurber from his jail cell, and threw a noose around his neck. The crowd drug Thurber through the city, eventually bringing him to the St. Paul, Minneapolis, and Manitoba railroad bridge that spanned the Red River between Grand Forks and East Grand Forks. At 4:04 PM, Thurber was shoved off the side of the bridge with a rope around his neck, and hung there until his official time of death at 4:30. The next day, Charles Thurber was buried in an unmarked grave in the Potter’s Field Section of Memorial Park Cemetery in a plain coffin.[4] After a day of discussion on whether or not leaders in the mob would be indicted, there was a decision made by officials that nobody would be arrested for Thurber’s death.

A similar incident occurred later in that week which suggests that Thurber's race had on impact on the mob's decision to murder him. A Canadian doctor named Andrew Elliot was accused on October 28, 1882 of exposing himself to a young girl in Grand Forks. Similar to Thurber, Elliot was apprehended by authorities, but a mob seized him from the jail, forced him to confess to the crime, and ultimately tarred and feathered his nearly naked body before they forced him to leave the town. Although the crimes that Thurber and Elliot were punished for were similar, only one of them ended in the death of the individual. To the mob, a few ideas were clear: both men deserved to be punished for the crimes they committed; the existing justice system would not provide the "correct" form of justice, whatever that may be; and finally, that Thurber, being black, deserved to die while Elliot would be allowed to stay alive, although badly injured.[5]

The phenomenon of lynching was widespread during the late nineteenth century and early twentieth century, and recent data sets on the phenomenon found there to be over 5,000 occurrences between 1684 and 1983.[6] Referring to themselves as a form of “vigilante justice,” mobs of people came together in an attempt to enact their will upon individuals who they deemed to have committed a crime, whether this meant in terms of statutes or in terms of disrupting the norm. While vigilantism could refer to a number of different actions, the most serious was the murder (or lynching) of an individual who had not been found guilty of a crime in a court of law; instead, their guilt was decided through a form of mob consensus. Though most lynchings against African Americans occurred in the southeastern part of the United States, where people in former Confederate States utilized vigilante methods in order to bring justice to their communities in the Reconstruction and post-Reconstruction Era, lynchings also occurred throughout the United States and its territories, including the murder of Thurber. The death of Charles Thurber was only the first incident of lynching in North Dakota. Between 1882 and 1931, eleven people died due to mob violence in the state: two black individuals (including Thurber), three Native American individuals, and six white individuals.[7]

Currently, there is no marker to designate or memorialize the death of Charles Thurber at the hands of an angry mob. In the early spring of 1997, students from Grand Forks Central High School approached the both the Grand Forks City Council and the city’s Historic Preservation Commission for funds to erect a plaque in memory of Thurber. When the devastating flood of 1997 hit the region only a short time afterward, it halted any plans going forward.[8] In September 2016, the Commission revisited the proposal and approved the design and placement of a plaque at a future date.[8] Individuals who are further interested in the event can also go to the Elwyn B. Robinson Department of Special Collections located within the nearby Chester Fritz Library (located on the campus of the University of North Dakota) and request a special folder filled with primary and secondary sources on the lynching of Charles Thurber.