The Amasa Day House is a wonderful example of a rural Federal house which showcases how the Industrial Revolution changed the daily life of American families. Located on the Moodus Green, it was constructed in 1816 for farmer, Colonel Julius Chapman, his wife Frances, and their four daughters. After his death, Amasa Day purchased the property, but later sold off parcels of land as he focused more on his roles as an insurance agent and banker. The house was subsequently inherited by Day's daughter and son-in-law Katherine and Eugene Chaffee. Chaffee worked at the nearby New York Net and Twine Company, one of 12 twine factories then located in Moodus, and did not farm the property. At this time, the house was redecorated and an addition was added. The house stayed in the family until 1967 when it was donated to Connecticut Landmarks. 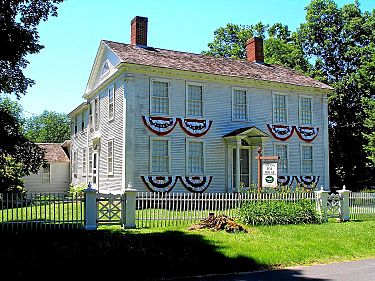 The house is furnished largely with objects owned by members of the Day family, including toys and locally produced ceramics and silver, and still features the original floor and stair stenciling applied to mimic carpeting. Also on display are a selection of photographs from among the thousands taken by pioneering art photographer Dr. Amasa Day Chaffee between 1890 and 1925. The house provides evidence of both the lives and lifestyles of the families who occupied the Amasa Day House between 1816 and 1967 and the periods of enormous change in American work and culture that they lived through. Their lives in the house span the American transformation from a traditional to a modern society that is familiar to us today.