Eppington is a Georgian-style plantation home that was built in 1768 by Frances Eppes (Historic Prince William Inc., 2004). The plantation is over 400 acres of and is situated along the Appomattox River in Chesterfield County. I chose to highlight this property because it is historically significant, yet there is very little publicity of the site. It is located nearly a mile from the main road River Road, in the area of the county called WInterpock. Due to its isolated and rural location, it was hidden from public view and had been forgotten for years. 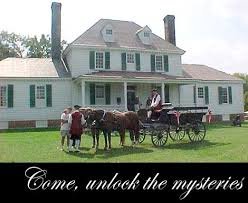 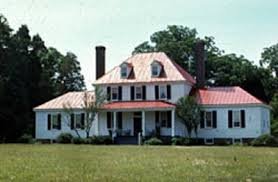 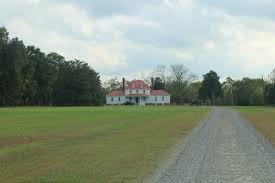 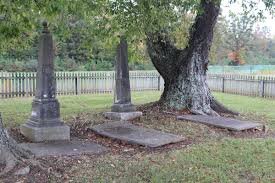 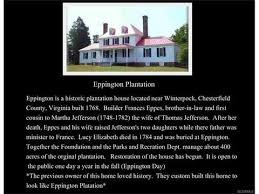 Eppington is historically significant because Francis Eppes, was a cousin of Martha Wayles Skelton Jefferson, Wife of Thomas Jefferson.  Eppes grandson John Wayles Eppes married his cousin Mary Jefferson Eppes in 1797. The plantation then became their home and the holding place for slaves that Wayles was selling South (Virginia Foundation for the Humanities,2010). Following Martha Jefferson’s death in 1782, two of Thomas Jefferson's daughters, Maria (Polly) and Lucy, lived at Eppington with the Eppes family while Jefferson served as minister to France. Jefferson visited Eppington on several occasions and was at this location when he received a letter from George Washington offering him the position of secretary of state. He was also there when George Washington sent word for him to come to France during the French Revolution (The Thomas Jefferson Foundation. 2002).  While Jefferson was away, tragically, Lucy died at age two in 1784 and was buried at Eppington (The Thomas Jefferson Foundation. 2002).

Because of its preserved condition and intricate structure, Eppington is architecturally significant.  It is also unique because it was built in perfect proportions. The two-and-a-half-story center portion of Eppington was built first in 1768, and the one-story wings were added around 1790 (Historic Prince William Inc., 2004). The practice of combining several varying sections developed in the third quarter of the 18th century, to break down the dominance of the central block of earlier Virginia houses. After the death of his wife Martha, Jefferson left his daughters at Eppington when he went to France during the French Revolution. His youngest daughter Lucy Elizabeth (age 2) died there of whooping cough and was the first burial in the Epps family cemetery. Her 2-year-old cousin Lucy Epps was buried beside her within 2 weeks. A Ground Penetrating Radar (GPR) survey of the graveyard at Eppington revealed 10 adult graves, 16 infant graves, and two vaults (National Parks Service, 1999).

After the Civil War, the house was brought by Henry Cox, but he sold it a few years later the Hinds family in 1876 (The Eppington Foundation, 2004). This family owned the property until 1989 when they gifted it to the Chesterfield County Historical Society (The Eppington Foundation, 2004). Currently there is a need for donations to purchase the land surrounding the plantation today, for archaeological research of the graveyard. There are also efforts to raise funding to restore the original slave quarters as well. Therefore, the plantation is a significant site relative to African-American history as well.