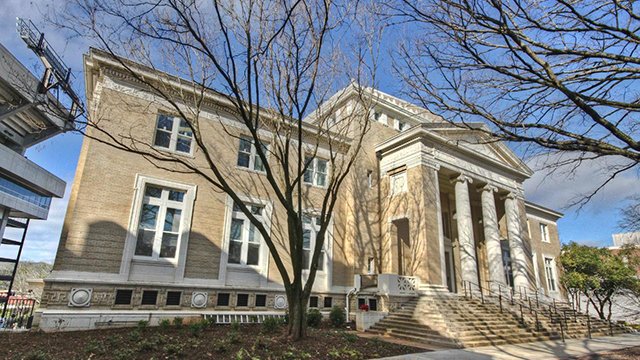 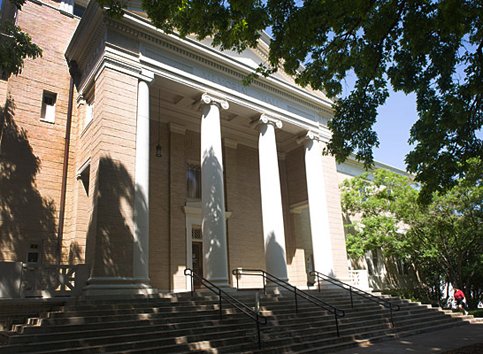 The University of Georgia's Memorial Hall boasts a long and storied history.  Originally known as the YMCA Building and later as Alumni Hall, the building began as a collaborative effort between the university and the Athens YMCA to create a student gymnasium and recreation center in 1910.  Donations gathered by the YMCA and UGA's Alumni Society, as well as a $15,000 gift from noted Georgia philanthropist George Foster Peabody, funded the construction of a building containing an indoor swimming pool and gymnasium, but little else.1 In 1911, the incomplete facility became the home of UGA's basketball team, and it gained some minor local fame as the site where Bulldog star shooter Alfred Witherspoon Scott scored a record 62 points in a 122-2 victory over Southeastern Christian College. Scott's performance did not translate into additional funding for the Hall, however.  By 1919, nearly a decade after its conception, the recreation center was no closer to completion than it had been in 1911, and the basketball team left in search of a new arena.2

Until 1920, the Alumni Society struggled to collect and effectively appropriate the money needed to construct the facility they had initially envisioned.  An 1897 fundraising campaign had provided them with enough donations to construct the first floor of the building, but the group's poor record-keeping and lack of member coordination made subsequent attempts to raise money difficult. When the Alumni Society gained full control of the project in 1912, re-naming the unfinished building Alumni Hall, they had neither the funds nor the know-how to complete it. They continued to develop, however, and the following eight years saw the Alumni Society grow into a competent and cohesive organization. This structural improvement coincided with the end of World War I and an influx of new students to the university, which prompted Dr. Robert E. Park, chairman of the school's dormitory committee, to petition the Alumni Society for a large sum of money that could be used to construct additional dormitories and other student facilities. In response, the Society created the War Memorial Fund, a one million dollar donation initiative dedicated to the Georgians who had died in World War I. In spite of its lofty goal, the War Memorial Fund was a resounding success, drawing five and six-figure contributions from the General Education Board, Clarke County, the Athletic Association, and George Foster Peabody, who specifically earmarked his $60,000 donation for the future upkeep of Memorial Hall.3 Ultimately, $216,000 of the money collected was put toward Memorial Hall, which was completed by Birmingham's Small-Brice Construction Company in 1925 and dedicated to the University of Georgia alumni who had died in World War I.4 5

Initially, Memorial Hall was used as an athletic space; until World War II, the building housed a number of physical education classes, including dancing, swimming, and various sports theory courses.6 7 During World War II, the building became a training facility for the Navy Pre-Flight School, who added even more gymnasium space to the structure.  Less than a decade later, Memorial was renovated again, this time to create offices for student activities staff.  The 1960s and early 70s saw Memorial Hall become the university's de facto student center, though new students were beginning to sour on its limited space, lack of recreational resources, and handicap inaccessibility.8 The building also drew ire from students for political reasons: During the 1971-1972 school year, student activists staged two anti-war protests outside Memorial Hall, attracting significant media attention.9 10

When the Dean William Tate Student Center opened in 1983, Memorial Hall's uneasy tenure as the university's only student recreation center ended.11 Since then, it has served a variety of miscellaneous functions related to student affairs and university administration.  It currently houses offices for the African American Cultural Center, Multicultural Services, International Student Life, Student Conduct, the LGBT Resource Center, and the office of the Vice President for Student Affairs.  It also offers two event spaces: the Memorial Hall Ballroom and Adinkra Hall.12