The Dr. George A. Shank house at the corner of 5th Street and Walnut Avenue, north of Main Street. (Photo: Mary Urashima; May 2012) 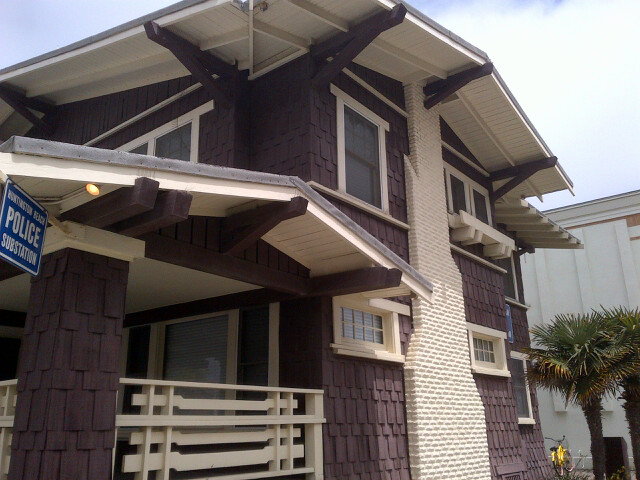 Constructed in 1913, the Doctor George A. Shank house originally had an ocean view.  It was moved from its original location at Pacific Coast Highway and 10th Street to its present location at 5th Street and Walnut Avenue in 1927 during oil boom years, when a number of houses were moved out of the City's growing oil fields.

Doctor Shank, one of the Huntington Beach Township's first medical doctors, served as the City's first health officer in the 1910s and as a member of the Board of Trustees for the City (predecessor to the city council) in 1926.

As a country doctor, Shank treated everything from gunshot wounds after a fight over a woman at the local cannery, to an accident at the Holly Sugar factory where a worker dropped a pipe on his foot, to the 1909 case of a seven-year-old boy finally coughing up a tack he had swallowed a year earlier (Shank kept the tack in his office). Shank helped institute some of the Huntington Beach Township's first public health regulations, including the inspection of local dairies and the testing of milk.

It's fitting the bungalow is now used by the City's police department.  Doctor Shank also was responsible for financing the City's first city hall and jail complex, just a few steps away at 218 and 220 5th Street. The windowless, brick jail cells with their iron clad sliding doors can still be viewed in the alley behind 5th Street.

Shank helped found the Huntington Beach Masonic Lodge #380 in 1906, so local members would not have to ride by horseback through the rough countryside to Santa Ana. He was a key force on the City board of trustees when appointed in 1926 and had lent his home's garage as a polling place in local elections. The Santa Ana Register noted in May 1908 that, "Doctor Shank deserves the gratitude of the community for his interest in public matters, which takes in everything for the public good".
The architect for the Shank house, British-born Frederick Harry Eley, also was affiliated with the Masons and was the first registered architect in Orange County. He is credited with the design of approximately 125 buildings in Orange County, two of which are on the National Register of Historic Places, including the Huntington Beach Gym and Pool.

Doctor George Shank passed away in May 1930, after spending three decades helping the Huntington Beach Township establish itself. His wife, Cora, who had helped organize the women's club in Huntington Beach and was a member of the Daughters of the American Revolution, died less than a year later.

After the home was sold, it functioned as a boarding house. When John Penner with the Los Angeles Times wrote about the Shank house in 1991, he reported that "rumors have persisted for years that the new police outlet at one time housed a brothel."  It's a popular rumor for a few of Huntington Beach's historic buildings, due to the undeniably rowdy days of oil discovery beginning in 1920.