This is the historical marker of the site of the Trans-Mississippi and International Exposition world fair held in Omaha in 1898. This fair drew people in from all around the world, including president McKinley. The fair ran from June to October of 1898 and drew in hundreds of thousands of people and over a million dollars in revenue. It also showcased an enormous amount of lights and electricity as a main attraction. 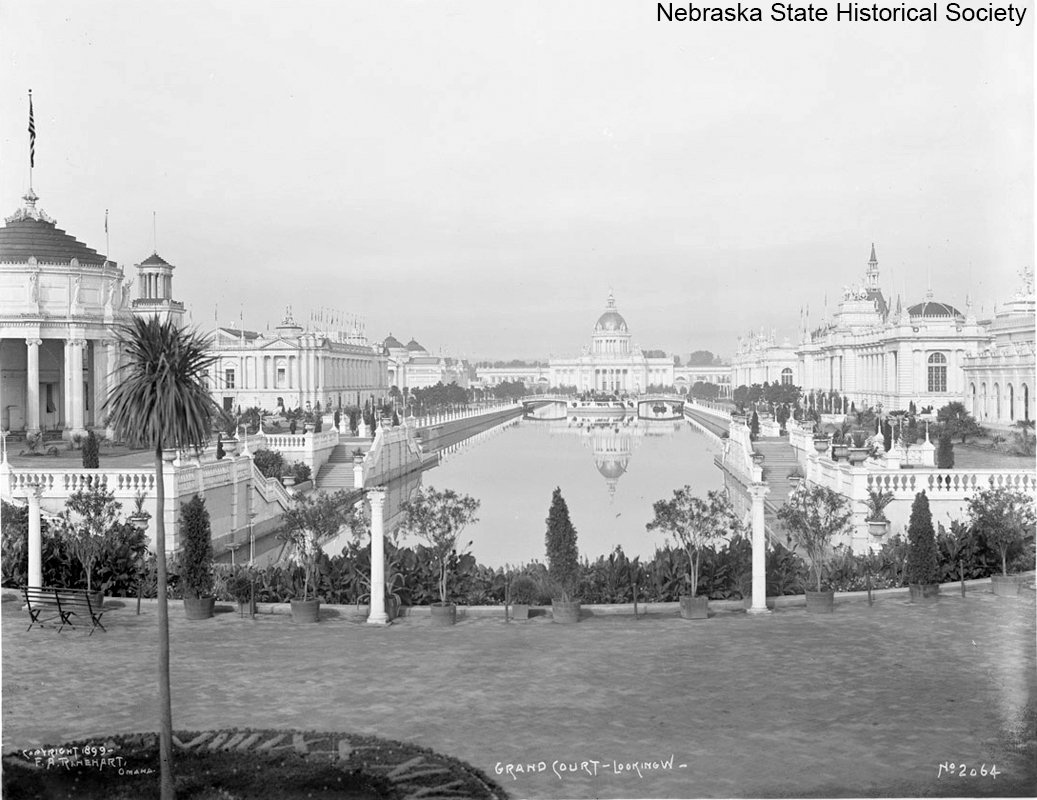 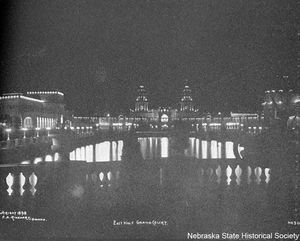 Cover of the fair program. (Link to License: http://www.e-nebraskahistory.org/index.php?title=File:96673_1w.jpg)

This historical marker at Kountze Park commemorates the history of the Trans-Mississippi Exposition of 1898 designates the location of the Grand Court. 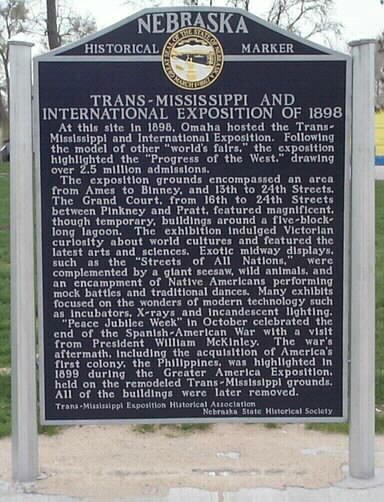 The Omaha World’s Fair, or the Trans-Mississippi and International Exposition of 1898, was a large fair held in present day North Omaha. During this time, World Fairs were a common phenomenon. These fairs attracted people from all around the world and showed off the most recent breakthroughs in technology as well as different talents, shows and regional activities and customs. The first World’s Fair was held in London in 1851. Within the five years prior to 1898, there had been world fairs in Chicago, Atlanta, and Nashville. The Trans-Mississippi and International Exposition opened on June 1, 1898 and ended on October 31, 1898 [1].

Because World’s Fairs were so popular at the time, many cities were interested in hosting their own. Just five years before Omaha’s fair there was one held in Chicago celebrating Christopher Columbus coming to America, and the drive to reach the west coast. By the end of this fair, many people thought that the event held in Chicago was more focused on eastern success than westward expansions. To give the world a better idea of what the west was like, William Jennings Bryan proposed having a World’s Fair in Omaha to congress and they all agreed unanimously to go forward with this plan [2].

During the boom of the World’s Fairs, over 20 countries hosted over 100 fairs, 40 of these being international exhibitions. The first World’s Fair, that was held in London in 1851, showcased the Crystal Palace. This fair was originally created because Prince Albert wanted to improve the sale of British goods abroad. This fair was so successful that it led other cities and countries to want to compete with it. One of the larger legacies left behind was that it generated such a profit that a fund was created to provide fellowships to British students that is still being used today. The vast majority of these fairs were held between 1880 and World War I, in countries such as Australia, Tasmania, and Guatemala. While none of these fairs ever did live up to the standard set by the very first one held in London, they did start a world-wide trend. Though Omaha’s fair was not the largest or most spectacular, it was a rather successful fair and brought quite a bit of attention to Omaha [3].

In preparation of a huge exposition in Omaha, the Trans-Mississippi and International Exposition Association was created. Gurdon Wattles was designated the president of this organization and oversaw making the larger decisions for the association. Thomas R. Kimball and C. Howard Walker were the head architects in charge of designing the buildings for the fair. These buildings were made from wood and plaster and painted bright white, all to keep costs down [4].

The Omaha World’s Fair of 1898 really showcased the interesting customs that were beginning to form in Omaha at the time. There were entire celebrations revolving around western settlement and the promotion of western resources to advocate homesteading and moving west. Just like the others, Omaha showed off the newest technologies from around the world, including using massive amounts of electricity and lighting.

A large portion of the fair was dedicated to promoting Nebraska, Omaha, and the advantages of larger scale farming for the economy. In addition to the technologies and promotions, there was a section of the fairgrounds dedicated to showing the world the Federal Indian Policy. This section of the fair was supposed to teach fair attendees about the lives, dress and culture of regional Native Americans. While this section started with rather good intentions, it ended up degenerating into more of a wild west show.

On President’s Day October 12, 1898, President McKinley visited the Trans-Mississippi and International Exposition. His appearance drew nearly 100,000 people that day. There were also days celebrating Chicago Day, Texas Watermelon Day, German Day, and many other things. By far the biggest attraction of the fair was the lights. There were very large white buildings and a manmade lake on the fairgrounds which were almost completely illuminated at night. This lighting and illumination were easily the most popular and stunning part of the fair. The main area of the fair, also called the Grand Court, was lit by over 20,000 eight and sixteen candle-power lamps [5]. The lights were described as being “like a glimpse into a fairyland [6].” Other attractions of the fair included shows by Buffalo Bill, the Indian Congress, scientific discoveries, as well as games and other fun activities.

By the end of the fair in October, there had been over two-and-a-half million people in attendance and nearly two million dollars in revenue. This revenue allowed investors to be paid back 90% of what they originally invested in the fair [7]. Overall, this was one of the more successful World’s Fairs. Though it was a huge success, it was still not built to last. Within 3 days of the close of the exposition the first building was demolished; by April of 1900, there was nothing physically left of the grandeur that once was the Trans-Mississippi and International Exposition [8].