Holy Trinity Church, or Old Swedes, as it is commonly known, is one of the oldest churches in the United States. The church was consecrated on June 4, 1699. The church was founded by early Swedish settlers to the area and is situated on the burial ground of Fort Christina, which dates to 1638. The church and surrounding grounds are listed on the National Register of Historic Places and is considered to be the First State National Historical Park. 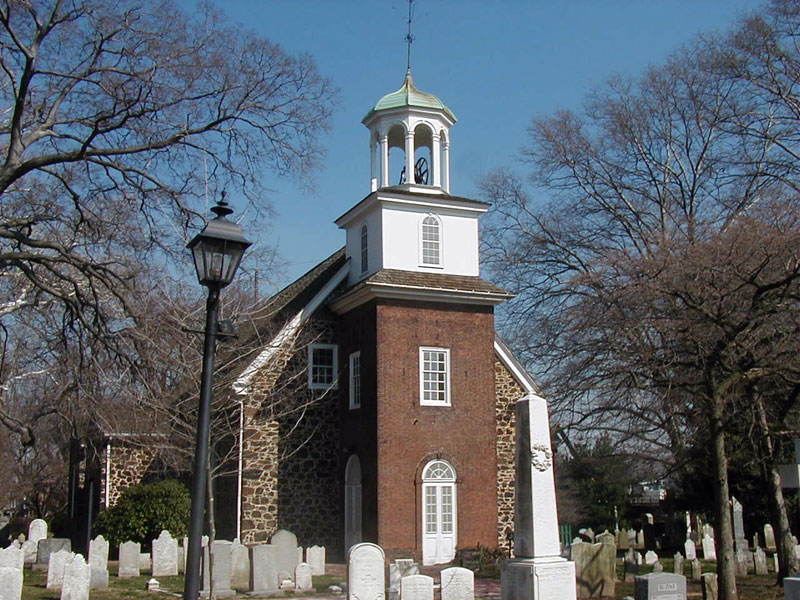 Graffiti on the door of Old Swedes dating to 1798. It was discovered during renovations and left as it was.

Considered by many to be the oldest continuously operating church in the United States, as well as the oldest church still standing as it was originally built, Old Swedes has a history almost as long as Wilmington itself. The church was founded in 1699 by some of the area's earliest settlers, who arrived from Sweden in 1638. The bricks that make up the church's facade were brought from Sweden and used as ship's ballast.

The church's burial ground dates to the settlement of the New Sweden colony in 1638. When the church was built some sixty years later, care was taken not to build the church on any of the existing graves. Since the earliest graves were marked only with wooden crosses--many of which disappeared over time--it is likely that some of the first graves are underneath the church. It is estimated that the cemetery contains between 8,000 and 10,000 graves, although only about 1,200 are marked. Priests and their families who died while in Wilmington are buried under the church's altar.

By the mid-1800s, the congregation of Old Swedes had outgrown the building. The congregation would eventually build eight other churches, including what is now Trinity Episcopal Church in Wilmington. Though the church was originally a Swedish Lutheran church, voted to change the church's affiliation in 1845, becoming an Episcopal church when they could no longer find Swedish Lutheran priests after the last one departed in 1791.

The church building was declared a National Historic Landmark in 1961 and was added to the National Register of Historic Places in 1966.

Our Past and Present. Trinity Episcopal Parish. . Accessed April 23, 2018. http://www.trinity-episcopal-parish.com/home/about-us/our-past-and-present/.