Katmai National Park and Preserve is located on a peninsula in southern Alaska. The park’s wild landscapes span tundra, forests, lakes and mountains. The park is known for the numerous brown bears that are drawn to the plentiful salmon in Brooks Falls. There are lookout platforms at adjacent Brooks Camp offer amazing close-up views of the bears. A highly popular area called the Valley of Ten Thousand Smokes is an area of lava flows and ash formed by a massive volcanic eruption in which a popular piece of history for this park. 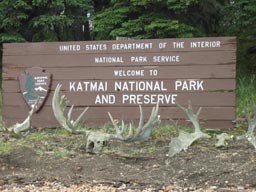 Various residents of communities around the park and preserve have hunted, fished and gathered berries and other materials from the land for numerous generations. Before the 1912 Mt. Katmai-Novarupta eruption, there was four year-round villages along with many other seasonally used camps in what is now called Katmai National Park and Preserve. Due to the heavy ash fall caused by the 1912 eruption, the inhabitants of Savonoski, Kaguyak or “Douglas”, Kukak, and Katmai villages left and resettled elsewhere along the Alaska Peninsula.

Individuals with historic ties to Katmai, typically of Alutiiq descent, now live around southwest Alaska and beyond. Locations especially include the villages of South Naknek, Naknek, King Salmon, Kokhanok, Igiugig, Levelock, Egegik, Chignik and Perryville. Numerous Katmai descendants are actively involved in subsistence activities and participate in the park management process through Alaska Native corporate and non-profit organizations. Katmai National Park and Preserve in Alaska is home to remarkable and distinctive volcanoes and many wildlife including fish, flowers, and bears.