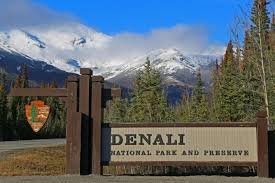 Built in 2005, the Denali Visitor Center is the main visitor center near the park entrance. The Denali Visitor Center offers exhibits, ranger walk and talks, informational opportunities, and park film. Denali National Park and Preserve covers six million acres of Alaskan wilderness. The immense granite spires and snowy peaks of Denali National Park and Preserve connects 160 miles of the Alaska Range and display extreme elevation. The park’s centerpiece is 20,310 ft. high Denali, also called Mount McKinley, in which is North America’s tallest peak. Denali is one of the most awe-inspiring sights in Alaska.

The history of this park is rich as generations of Athabascans had wandered through what is now the Denali National Park and Preserve. The first permanent settlement was established in 1905 when a gold miners' rush created to the town of Kantishna. After a year later Charles Sheldon, naturalist and noted hunter, was stunned by the beauty of the land and dismayed at the reckless abandon of the miners and big-game hunters. In 1907, Charles Sheldon returned and traveled the area with guide Harry Karstens in an effort to set up boundaries for a proposed national park.

Charles Sheldon was successful in his quest as the area was established as “Mount McKinley National Park” in 1917.  Harry Karstens served as the park's first superintendent. In 1976, the park was was designated as an international biosphere reserve. The park was enlarged to more than 6 million acres and renamed Denali National Park and Preserve as a result of the 1980 Alaska National Interest Lands Conservation Act. In 2015, President Barack Obama renamed Mt. McKinley to Denali. The name Denali represents its Athabascan name meaning “the Tall One.” Denali is ranked as one of Alaska's top attractions and now comprises an area slightly larger than the state of Massachusetts.