Once the largest indoor stadium in the world, the Pontiac Silverdome was abandoned by its current owner after a variety of redevelopment plans and attempts to sell the historic venue failed. The legendary arena was home to the Detroit Lions and also hosted Pistons games and other events. Following a deal made between the city of Pontiac and its current owner in the summer of 2017, the venue is scheduled for demolition.

Once the largest stadium of any NFL teams, the Silverdome is in the process of being demolished.

The Silverdome hosted NFL and NBA games among many other events. 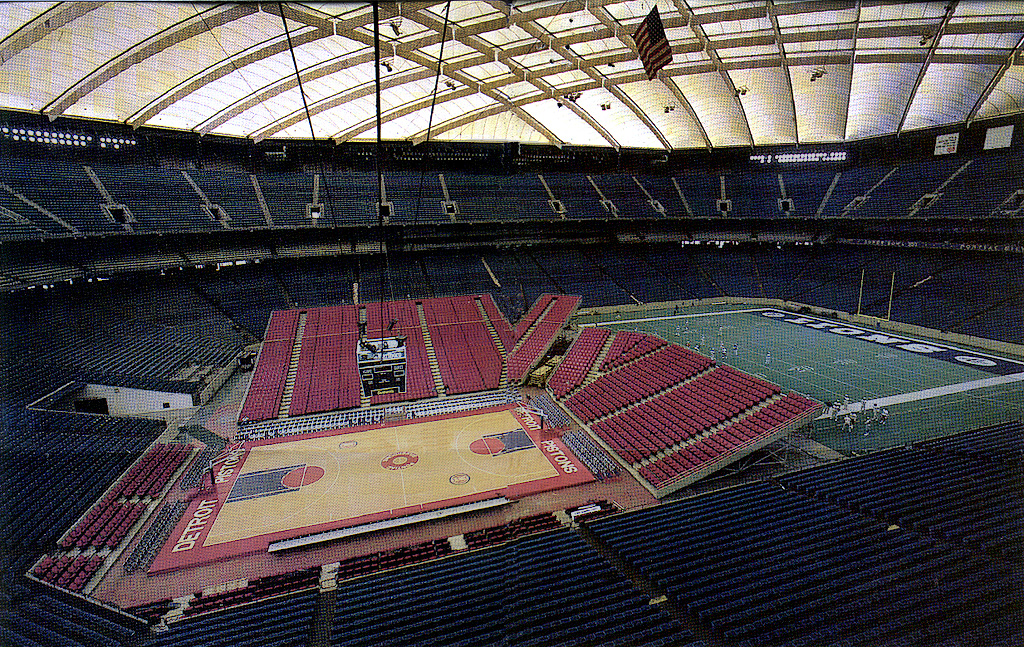 The Silverdome fell into disrepair following the departure of the Detroit Lions despite multiple attempts to redevelop the property. 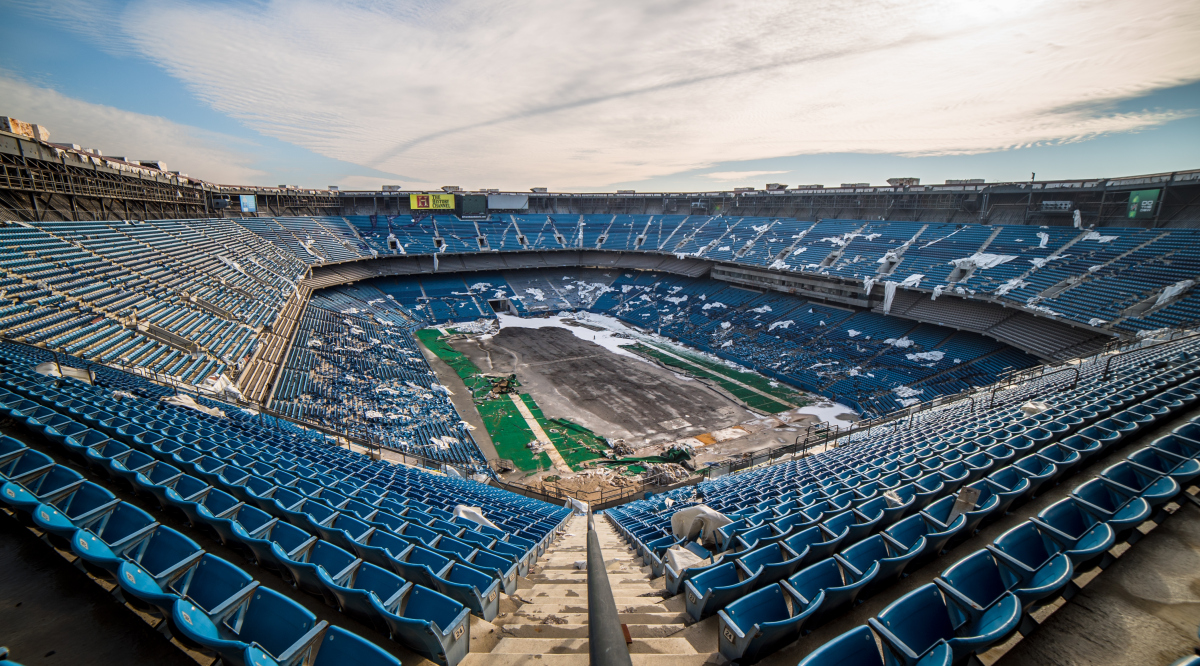 Demolished Silverdome after the 2nd try 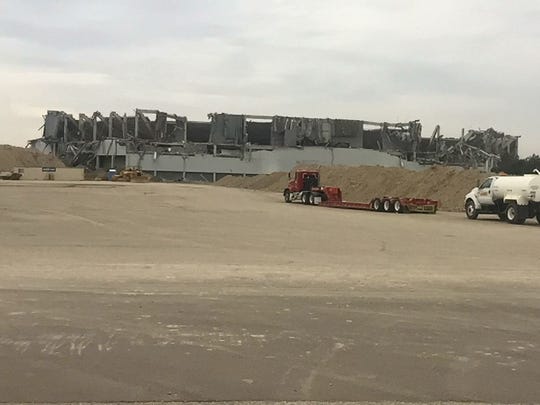 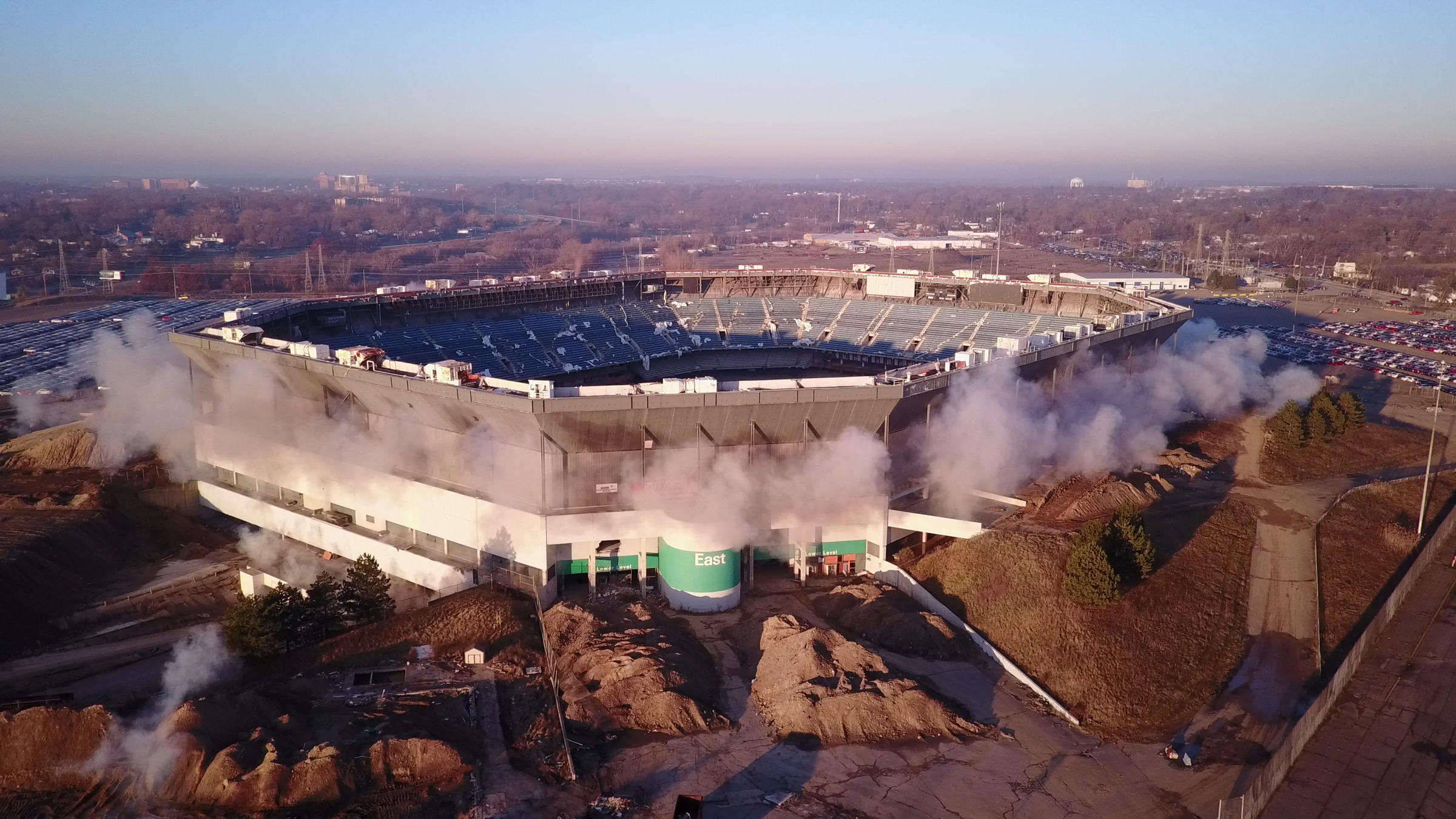 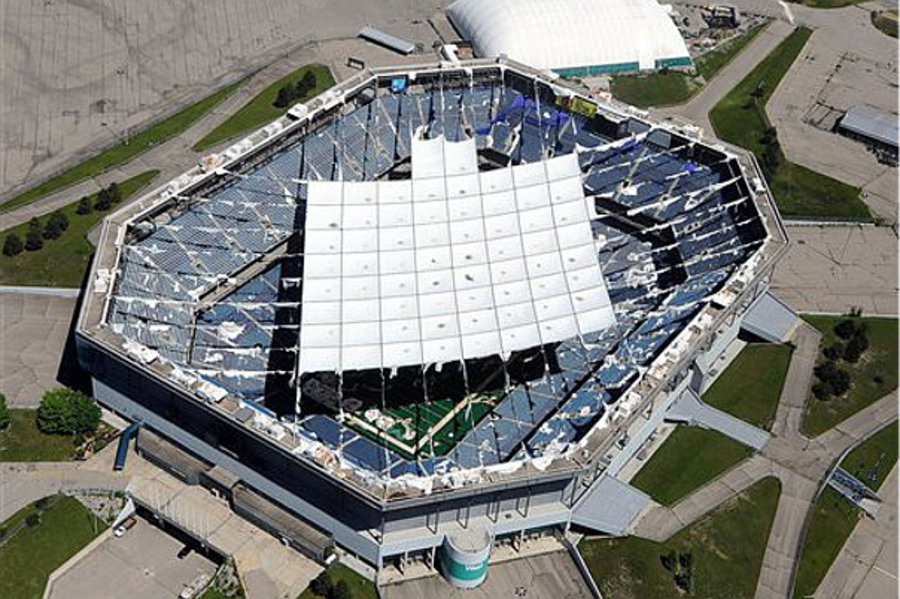 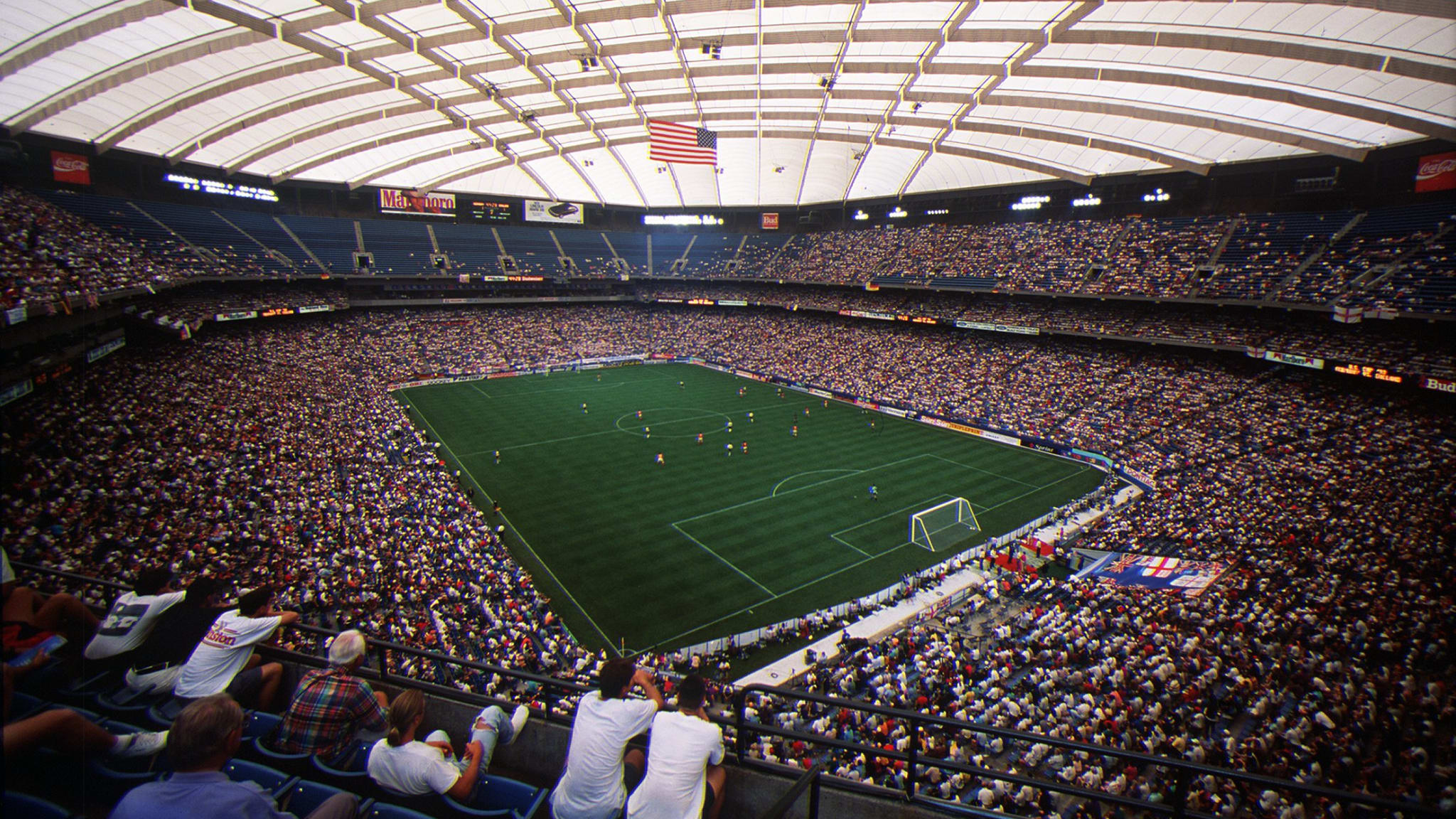 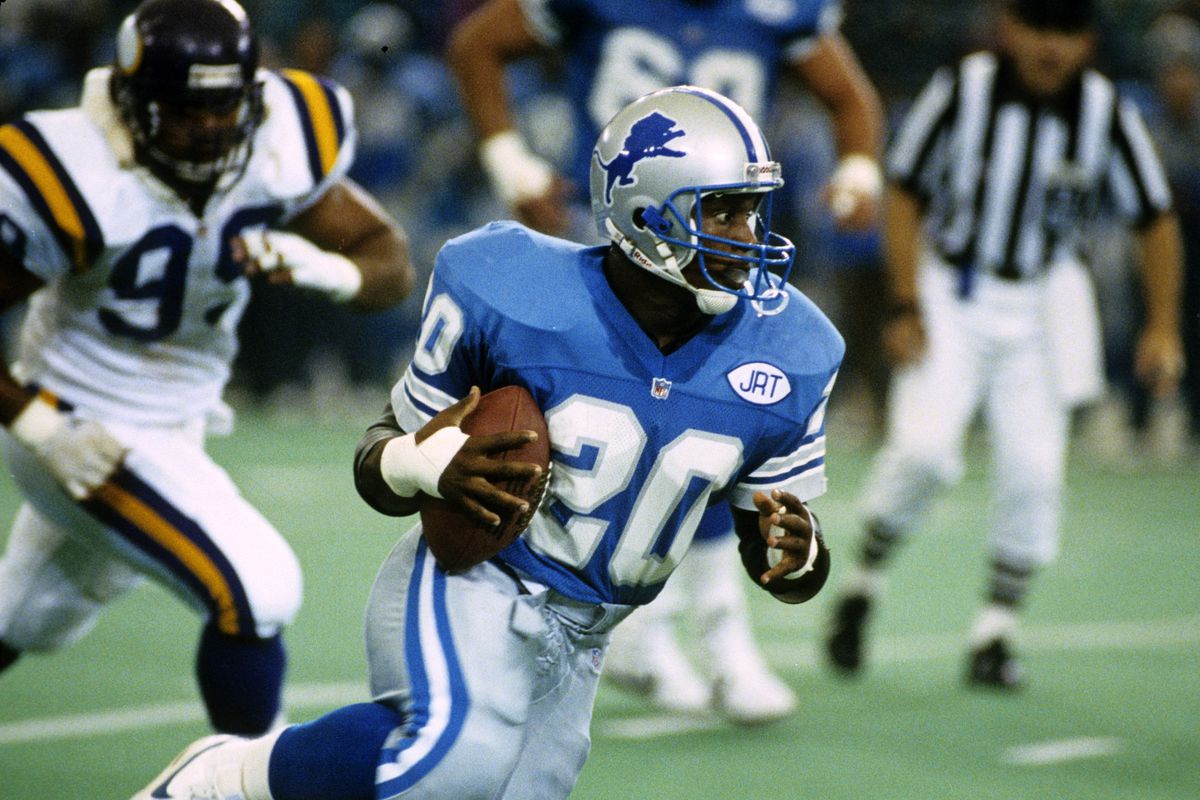 The Pontiac Silverdome was the home of the Detroit Pistons from 1978 to 1988 and the Detroit Lions of the NFL from 1975-2001. The venue also hosted multiple FIFA World Cup matches in 1994, and Super Bowl XVI. Construction of the stadium began on September 19, 1973 in Pontiac, MI. The venue became the largest of all NFL stadiums when it was completed 23 months, and $55 million later. The massive stadium held 42,082 in the lower lever, another 7,342 at the club level, and another 29,399 in the upper level. In addition, the new stadium included private suites that could accommodate another 1,246 for a total of 80,311. In the 1970's, the Pontiac Silverdome was the largest stadium in the world- a fact that would soon lead to challenges as the massive dome felt empty when not filled to capacity.

The stadium opened with a game between the Kansas City Chiefs and the Detroit Lions on October 6, 1975. The stadium was one of the most famous venues in all of sports throughout the 1970s and 1980s. Although its fabric roof was damaged in a heavy snow storm, a new roof was constructed that proved more durable while retaining the stadium roof's unique "silver" appearance. The Detroit Pistons shared the Pontiac Silverdome for 10 years before moving to their own arena, The Palace of Auburn Hills. With the announcement of a new downtown ballpark for the Detroit Tigers, the Lions announced that they would work with Detroit officials to create a new stadium adjacent to the ballpark that could better fit the declining attendance. The last game for the Detroit Lions in the Pontiac Silverdome was January 6, 2002.

During the Lions' tenure at the Silverdome, although the Lions overall record during its time was 175-238-1, they defended home-field on most occasions, with a positive 116-92-1 record at the Silverdome itself. This tenure would also include the Lions' most recent playoff victory at the Silverdome against a Troy Aikman and Emmitt Smith led Dallas Cowboys in 1991 with a dominating score of 38-6. The Lions last season at the Silverdome was a disappointing one though, with a final regular season record of 2-14.

Beginning in 1989, Lions wins in the Silverdome would also include the spectacular effort and ten years of Hall of Fame all-time running back Barry Sanders, who performed his 1997 MVP season as well as his NFL leading rushing seasons at the stadium. Although his NFL career ended rather prematurely, Sanders ran for over 15,000 yards and 99 touchdowns while performing in Pontiac.

The city held a no-reserve auction and sold the stadium for a little over $500,000 to a Canadian real estate firm that promised to redevelop the stadium. Multiple attempts failed and the company has agreed to demolish the historic venue which has been an eyesore for many years. Demolition was to take place in December of 2017. The first try at demolishing the upper bowl failed and would require another try several days later. On the second try, the concrete of the upper bowl fell away exposing the steel beams of the inside of the stadium.

In September of 2019, rumors swirled about Amazon potentially buying the site of the Silverdome and using it as a distribution center. The potential construction would be part of a $250 million project that would bring in about 1,500 jobs. The stadium would be turned into a warehouse that would be used for both distribution and fulfillment.