Forest Houses, A New York City Housing Project in the Morrisania Section of the South Bronx

Forest Houses is one of the 326 public housing developments managed by the New York City Housing Authority, which provides homes for low- and middle-income New Yorkers. The Bronx housing development is bounded by Trinity and Tinton Avenues and stretches from 163rd street to 166th street. Forest Houses was constructed in 1956 and was part of New York City’s urban renewal project, which aimed to revitalize neighborhoods characterized as blighted and whose inhabitants lived in substandard and unsanitary conditions. Notable residents are Diamond D, Lord Finesse, Showbiz, and Fat Joe.

A map of the proposed site of the Forest Houses development. Two avenues, Jackson and Forest, were bulldozed and planned over to create the superblocks where Forest Hoses is located. (Image from Wagner and Laguardia Archives) 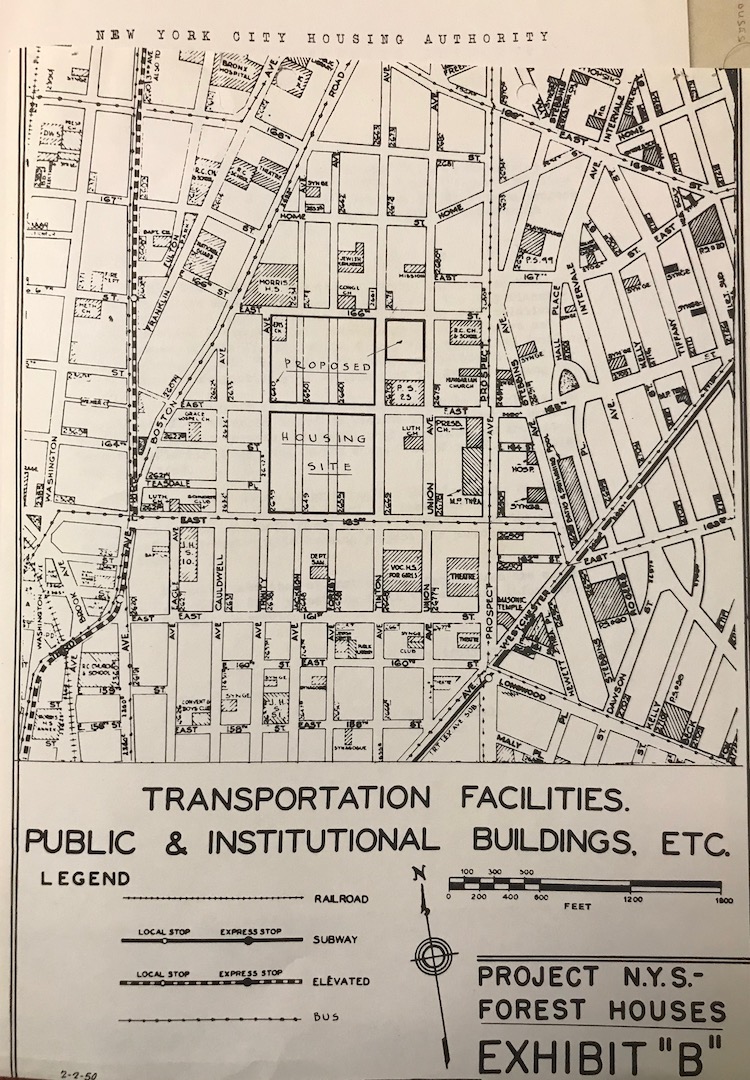 A map that shows the 15 buildings of Forest Houses and their varying heights. (Image from Wagner and Laguardia Archives) 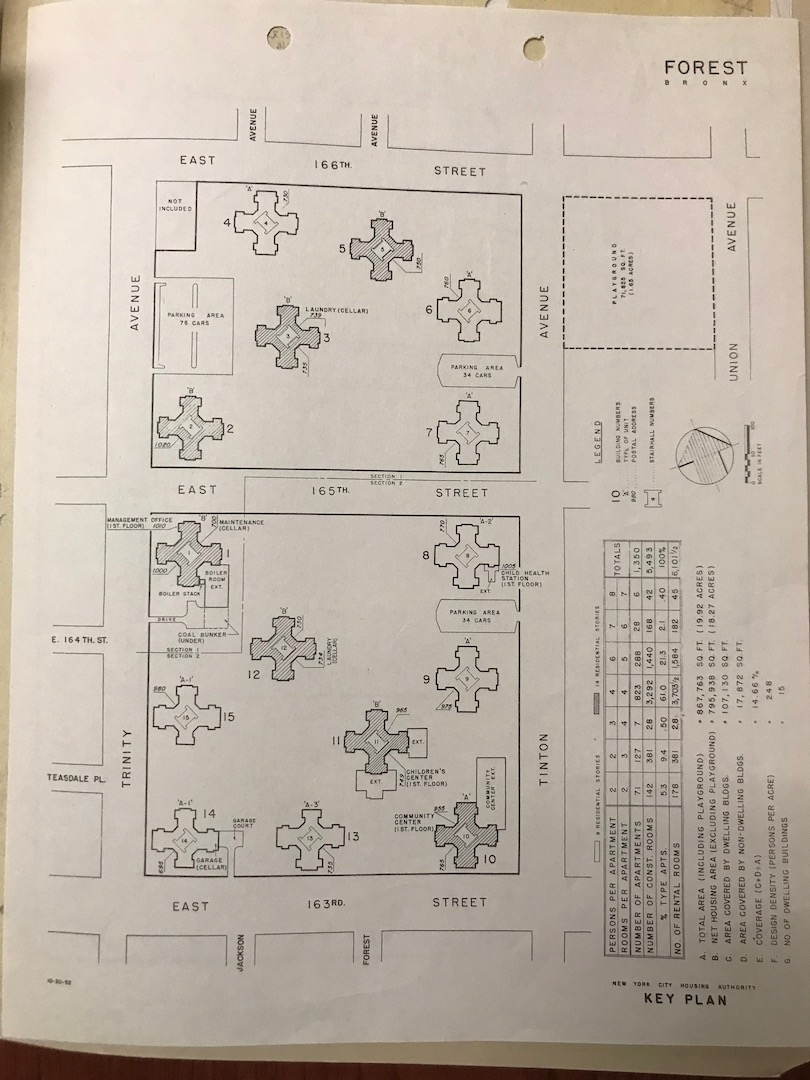 A blueprint that shows the proposed plan to widen the streets surrounding Forest Houses. In the original plans, Trinity Episcopal Church was to be demolished and moved to a different location. 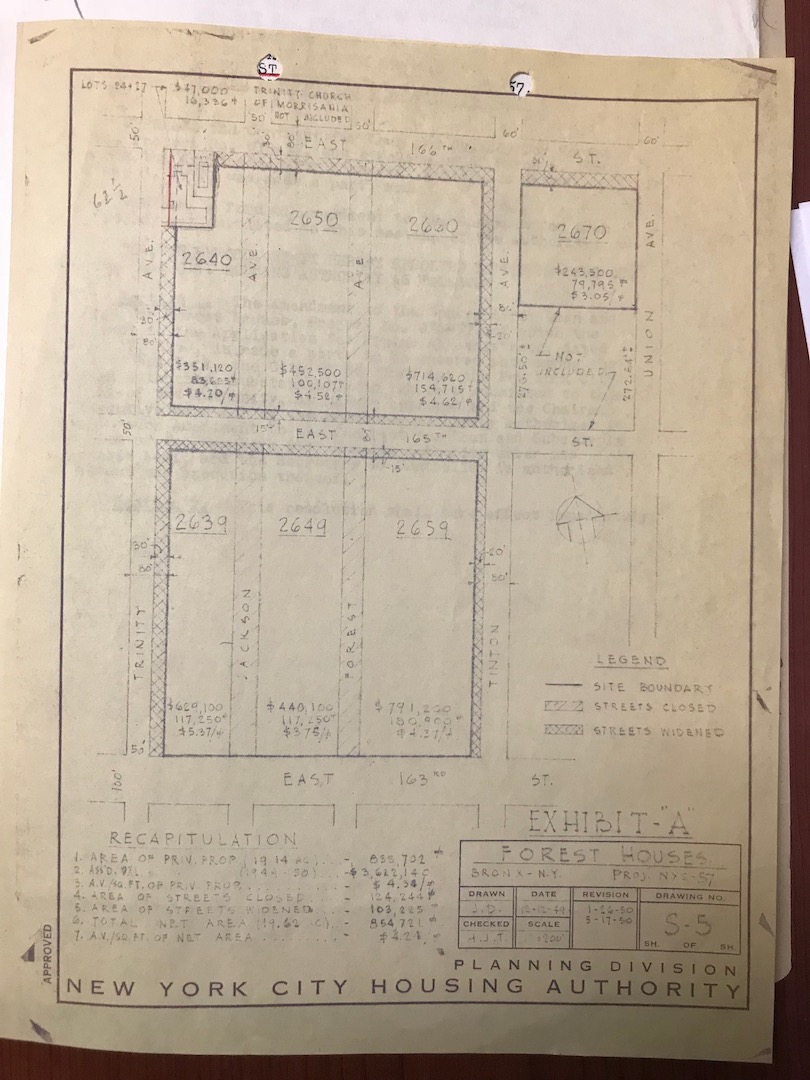 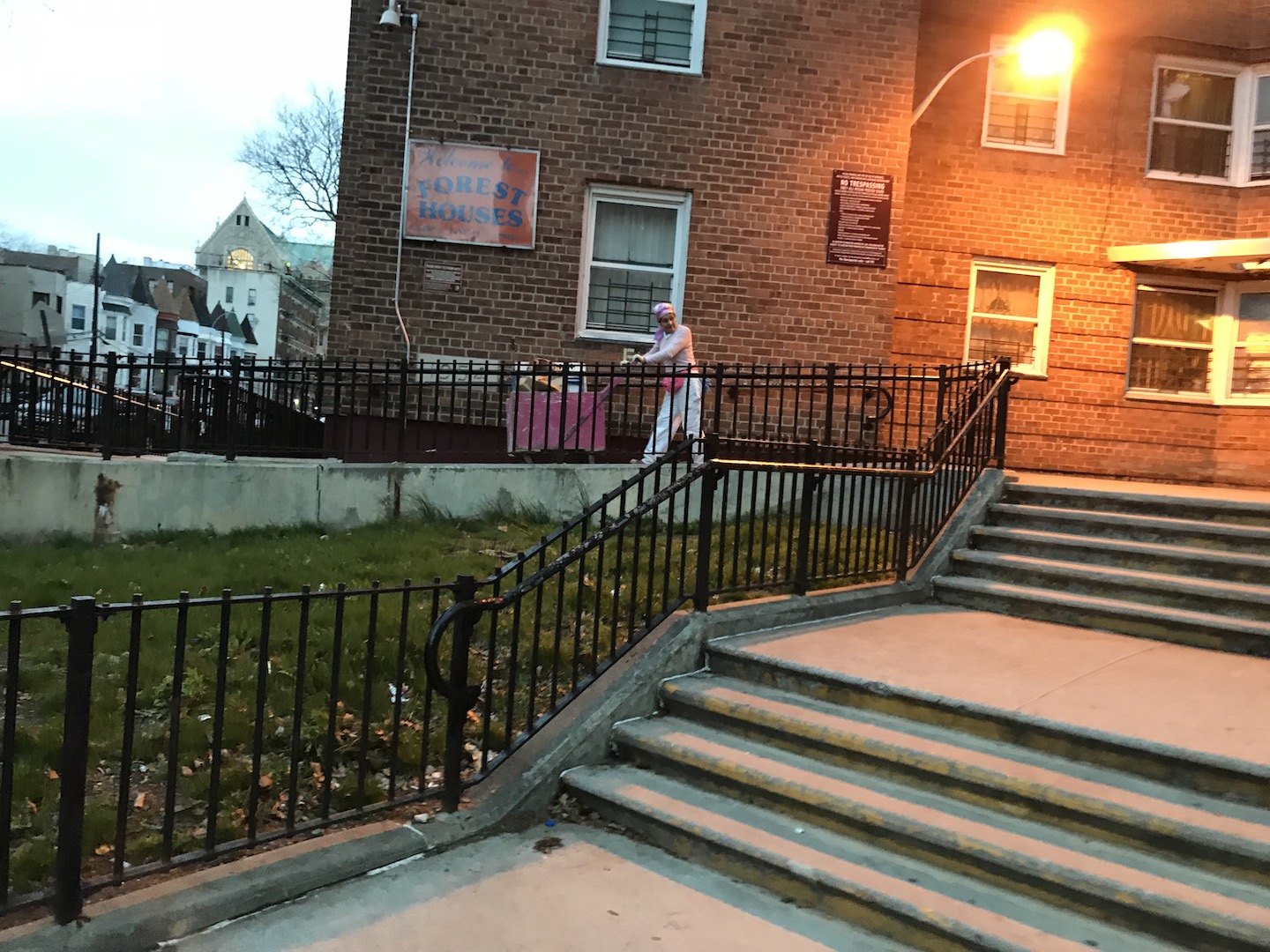 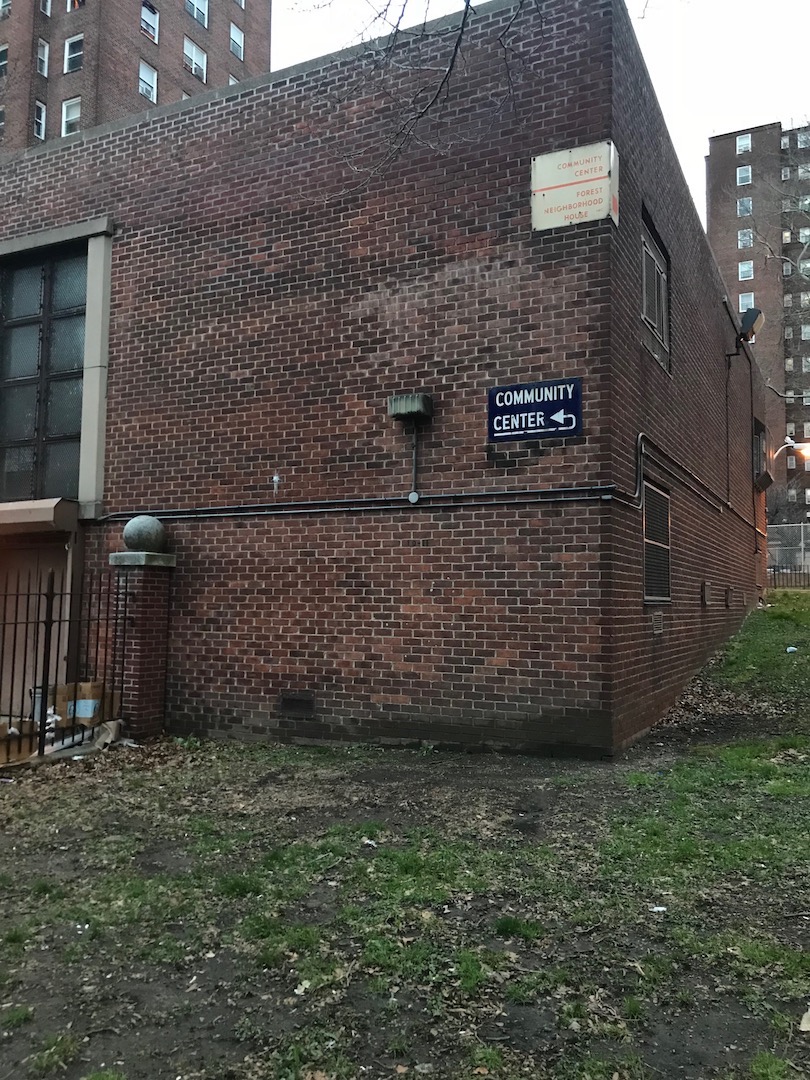 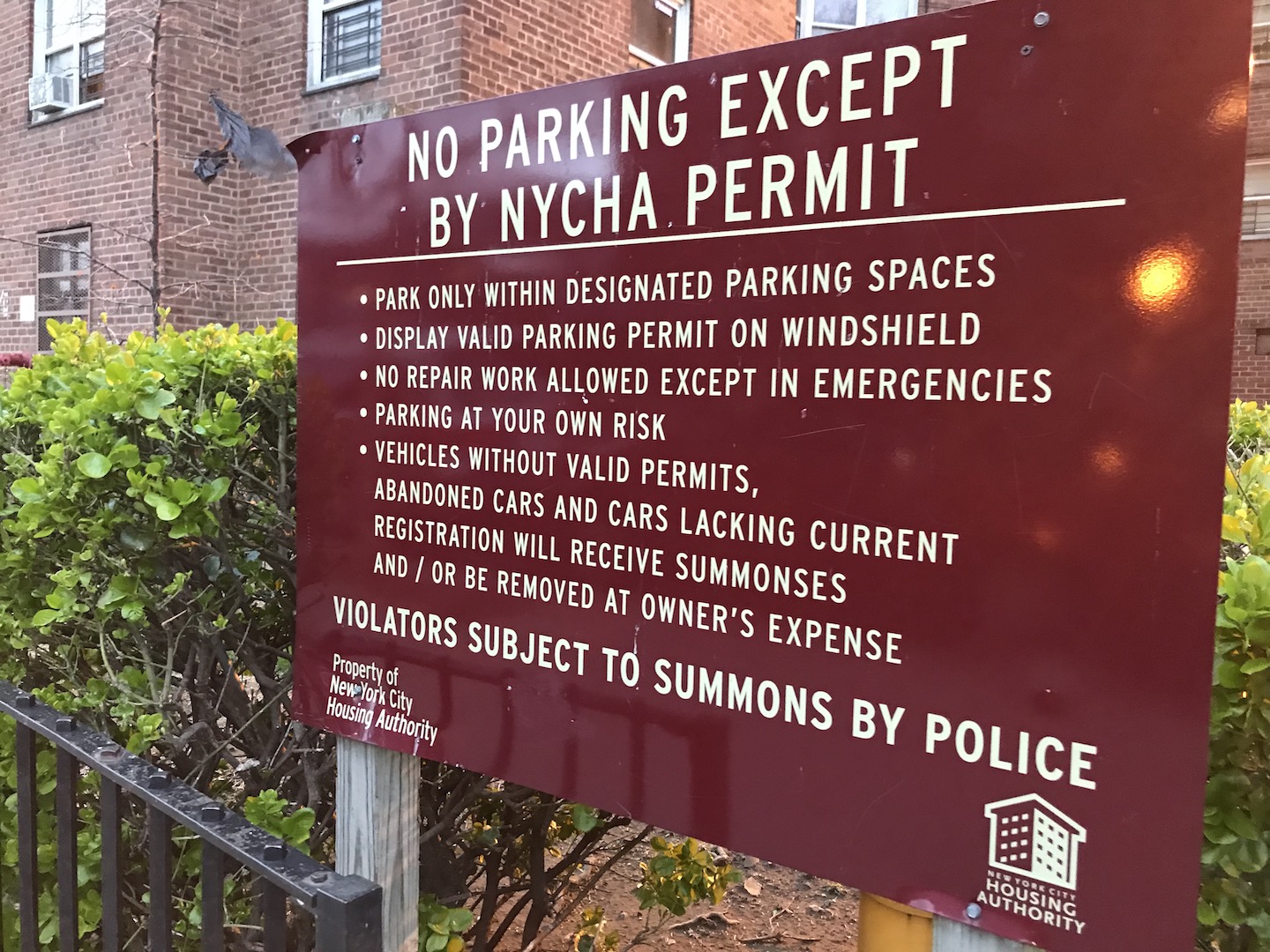 Before Forest Houses was built, there were low-rise structures made of bricks and wood on the property. Today, 15 red brick high-rise apartment buildings, all varying in height, now stand in place. The Trinity Episcopal Church on East 166th street is the only structure that remained untouched during construction, which illustrates the power of the Episcopal Church in the twentieth century. Master negotiator Dr. Kenneth D. Miller of the New York City Mission Society convinced developers and the city that the church was an integral part of the neighborhood and that relocation would be destructive for both the church and the people. There was a constant tension throughout New York City’s process of urban renewal. Land was acquired by eminent domain, angering many who believed that the city was engaging in unethical practices. In the end, the city usually got its way.

In order to create the two superblocks that Forest Houses is built upon, Jackson Avenue and Forest Avenue were razed. The demolition of the two avenues allowed the city to achieve its goal of creating a purely residential neighborhood. To buy goods like clothing and food, a resident would have to walk two blocks east from Trinity Avenue in order to arrive at the shopping strip on Third Avenue. No commercial spaces exist on the grounds of Forest Houses and only a few exist along the perimeter. Planners believed that the best city was one in which living quarters and park space were separated from commercial retail.  Many urbanists at the time and since have disagreed with the prescription, notably activist and urban theorist Jane Jacobs. In The Death and Life of Great American Cities (1961), Jacobs argued that “a well-used city street is apt to be safe” and thus it is imperative to have storefronts along city streets because the busier a street is, the safer the area must be because more eyes surveil the location.

From the onset, planners devoted a portion of land on the Forest Houses complex for park and recreational purposes. The benches, play area, green spaces, and charcoal grills were meticulously designed by Mr. M. Paul Friedberg to spur human interactions. A swimming pool was proposed and approved, but the idea was abandoned. NYCHA’s limited budget and the impending fiscal crisis that eventually would strike in the mid-1970s were all factors that contributed to the decision to remove the construction of the pool. With over 1,300 apartments that can accommodate approximately 3,129 people, Forest Houses is the product of innovative ideas addressing affordable housing in the city.

Due to decreasing flow of monies, the housing development is in dire need of repairs today. Governor Andrew Cuomo toured Forest Houses on March 22, 2018 and stated that NYCHA is incompetent. In order to obtain transformative results at Forest Houses, people must elect officials who are committed to solving the NYCHA crisis and hold them accountable to their promises. Despite the problems residents encounter, Forest Houses is a place filled with resilient people and a thriving culture.