In 1914, a group of movie producers and directors bought the World Pictures distribution company. They used the World Film Company (as it was also known) to distribute their films shot at the Peerless studio. In 1916, the company added a second studio, the Paragon. Production at World ended in 1919, and it was rented by independent companies thereafter. In 1928, producer and new owner Phil Goldstone soundproofed the studios, turning them into the Metropolitan Sound Studios. The buildings caught fire in 1958, leaving only the Brulatour Building standing today.

The exterior of the Peerless Studio.

A still from "A Girl's Folly" showing the inside of the Paragon studio. 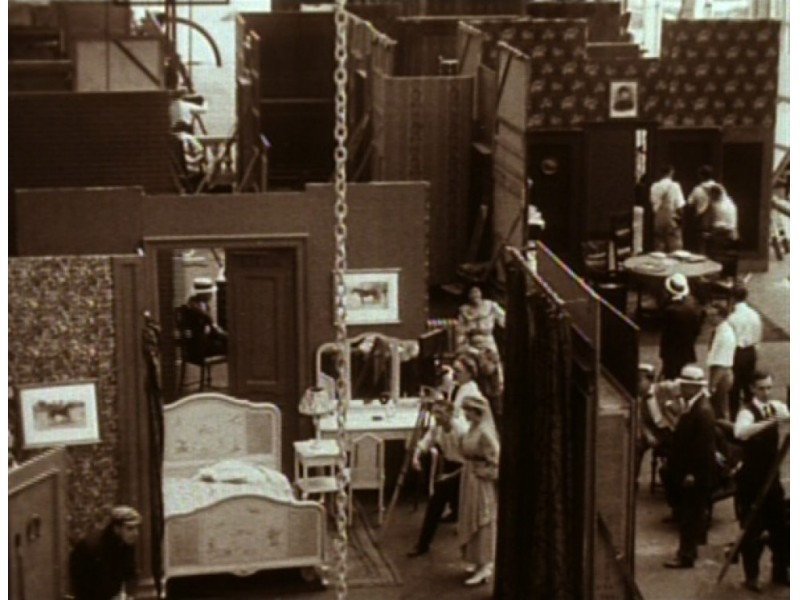 A marker in Constitution Park in Fort Lee for the World/Peerless & Metropolitan Studios. Photo by Bill Coughlin. 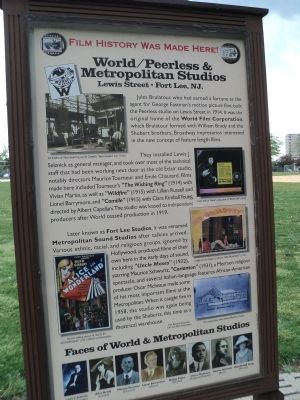 World Pictures (also known as the World Film Company and the World Film Corporation) was initially founded to distribute international films to exhibitors in the United States. In 1914, a group of investors (mostly made up of movie producers) bought World Pictures. They planned to distribute the films of their respective companies, including Equitable Pictures (which had recently contracted star Clara Kimball Young), the Shubert Theatrical Company (which would provide plays to be turned into movies), and Peerless Pictures (owned by director Jules Brulatour). That same year, 1914, the Peerless studio was built on Lewis Avenue in Fort Lee, New Jersey. The studio was used for all of the aforementioned film production companies as well as some other independent companies like the California Motion Picture Corporation. Each of their films was branded with the World Pictures name, making it better known than the individual production companies it consisted of.

As World Pictures continued to grow, a need for more studio space arose. In 1916, Brulatour built his Paragon Studio, designed by architect Edward Bernard Kinsila, on Jane Street. It would prove to be the last movie studio erected in Fort Lee. The 200-by-200 feet building was equipped with all the bells and whistles involved with filmmaking at the time. The first floor was divided amongst shooting areas and administrative offices. The second contained dressing rooms and bathrooms. There was also an indoor pool for filming and a steel bridge that allowed directors and cameramen to get a bird’s eye view of sets. Two revolving stages could turn to follow the sun’s light throughout the day and could each fit two large and two small sets. The flooring was nailed down to the concrete to prevent cameras from picking up vibrations that could travel through the floor. The glass ceiling let in sunlight and was showered by a “water curtain” on hot days to keep things cool inside. When it was still too hot to work indoors, there was an outdoor stage that could fit fifteen sets. Only the “Brulatour Building” where the director produced his film stock still stands today.

Lewis Selznick of Equitable Pictures was squeezed out of the World Film Company in 1916. He went on to join ventures with other producers until he eventually bought World Pictures completely, renaming it the Republic Distributing Corporation. He then gradually moved filming from the east coast to the west, a trend that was making Hollywood, not Fort Lee, the movie-making capital of the United States. Production at World ceased in 1919, and its studios were rented out to independent companies. Later, the city took over the property for back taxes. The “Fort Lee Studios,” as they were then known, were sold to producer Phil Goldstone, who decided to soundproof them so that they could be used to make sound films. In 1928, while accomplishing that goal, there was an explosion that killed one and injured fourteen others. Work continued, and the new Metropolitan Sound Studios opened for business. The studios became popular with those who couldn’t find work in Hollywood, like ethnic, racial, and religious minorities. Legendary African-American director Oscar Micheaux made a number of important films there. Unfortunately, the studios caught fire in 1958 while being used as a warehouse for the Schubert Theatrical Company.