Waddel Hall is one of the oldest buildings on the campus of the University of Georgia. Completed in 1821, it was originally named Philosophical Hall. The Old College was the only building on the campus before Waddel Hall. It has served multiple services since its completion including: storing scientific equipment, a gym, classrooms, a boarding house, the College of Agriculture, the home of Registrar Thomas Reed, a snack bar, the Office of the University of Georgia Press, and the Dean Rusk Center for International Law. However, it currently serves as the center of the Office of Special Events.

Waddel Hall remains surrounded by greenery on the University of Georgia's North Campus. 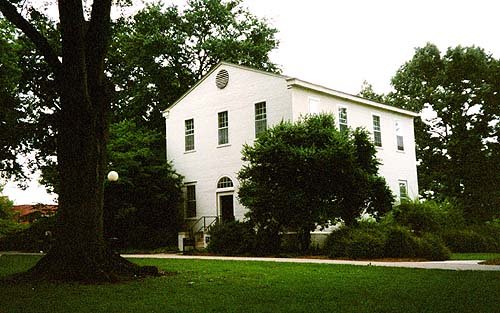 The front entrance to Waddel Hall. 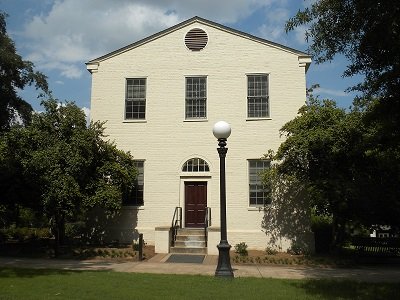 Moses Waddel accepted the position of the President of the University of Georgia in 1821 and became the fifth president of the university until his resignation in 1829. Born in North Carolina, Waddel became revered as an academician and educator in the south due to his creation of “log cabin schools” in South Carolina and Georgia in the early 19th century, most notably the Willington Academy in Willington, South Carolina.

Waddel’s Presidency at the University of Georgia was defined by his faith leading the University in a more religious direction. This directly resulted in more than thirty of the sixty-one graduates under his Presidency to go on to become protestant ministers.

Waddel, a Presbyterian minister, founded Willington at the behest of a nearby Huguenot settlement. Waddel increased his fame by publishing Memoirs of the life of Miss Caroline Elizabeth Smelt in 1819 which was widely published through the United States and England. This book which followed the life of an upper class woman in the Southern United States, helped to establish Waddel as the premiere educator in the South at that time. He also constructed the New College Building in 1823 and the Demosthenian Hall in 1824.

Waddel Hall itself, or Philosophical Hall as it was called at its creation in 1821, was constructed in the federal style being described by the University of Georgia historian, Nash Boney, as “austere, and unpretentious.” The name of the building was changed in the 1950s to honor Moses Waddel, the University of Georgia President, who commissioned the structure originally to expand the available classrooms and storage capabilities of the University. Philosophical Hall is the second oldest building on campus being younger than only the Old College building. It has served multiple services since its completion including: storing scientific equipment, a gym, classrooms, a boarding house, the College of Agriculture, the home of Registrar Thomas Reed, a snack bar, the Office of the University of Georgia Press, and the Dean Rusk Center for International Law before becoming the home of the Office of Special Events. The building has undergone minor interior renovation, but has not expanded from its original dimensions since 1821.

Today, Waddel Hall serves as the home to the Office of Special Events for the University of Georgia. It stands on North Campus across South Jackson Street from the Presidents Office and the North Campus Quad.