Located about 30 miles south of the Canadian Border, the Safeguard Missile Complex was located to protect the northern tier of North Dakota and Minnesota from attacking missiles from either the Soviet Union or China. Cost of the system: Almost $6 billion! The complex was fully operational with missiles on October 1, 1975. The next day the US House voted to deactivate the system. Today, the location of the silos and the pyramid are under the control of the Cavalier County Job Development Corporation, with hopes of creating some office space and an interpretive center.

Location of Minuteman missile launch sites and missile silos under the control of the 446th Missile Squadron, based out of the Grand Forks Air Force Base. By Bwmoll3 - Own work, CC BY-SA 3.0, https://commons.wikimedia.org/w/index.php?curid=12275626 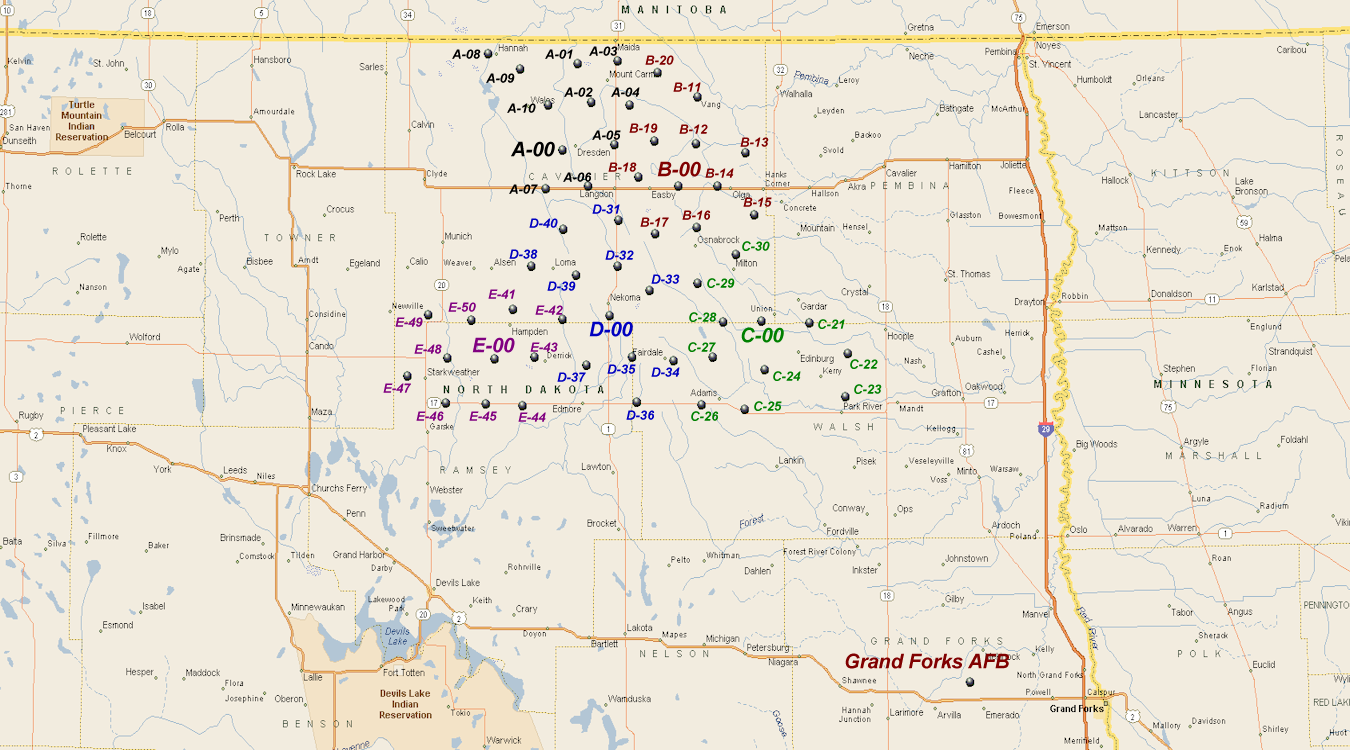 Location of Minuteman missile launch sites and missile silos under the control of the 447 Missile Squadron, based out of the Grand Forks Air Force Base. By Bwmoll3 - Own work, CC BY-SA 3.0, https://commons.wikimedia.org/w/index.php?curid=12275640 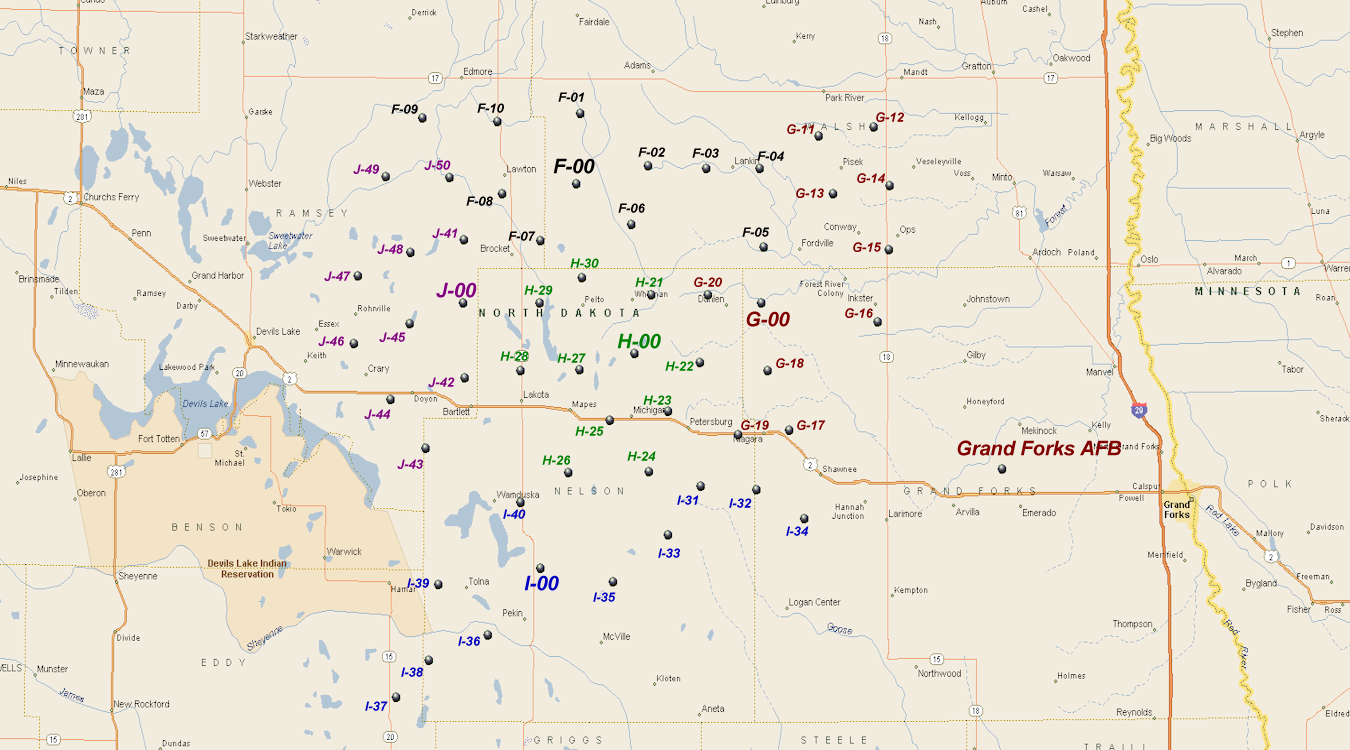 Location of Minutemen missile launch sites and missile silos under the control of the 448th Missile Squadron, based out of the Grand Forks Air Force Base. By Bwmoll3 - Own work, CC BY-SA 3.0, https://commons.wikimedia.org/w/index.php?curid=12275645 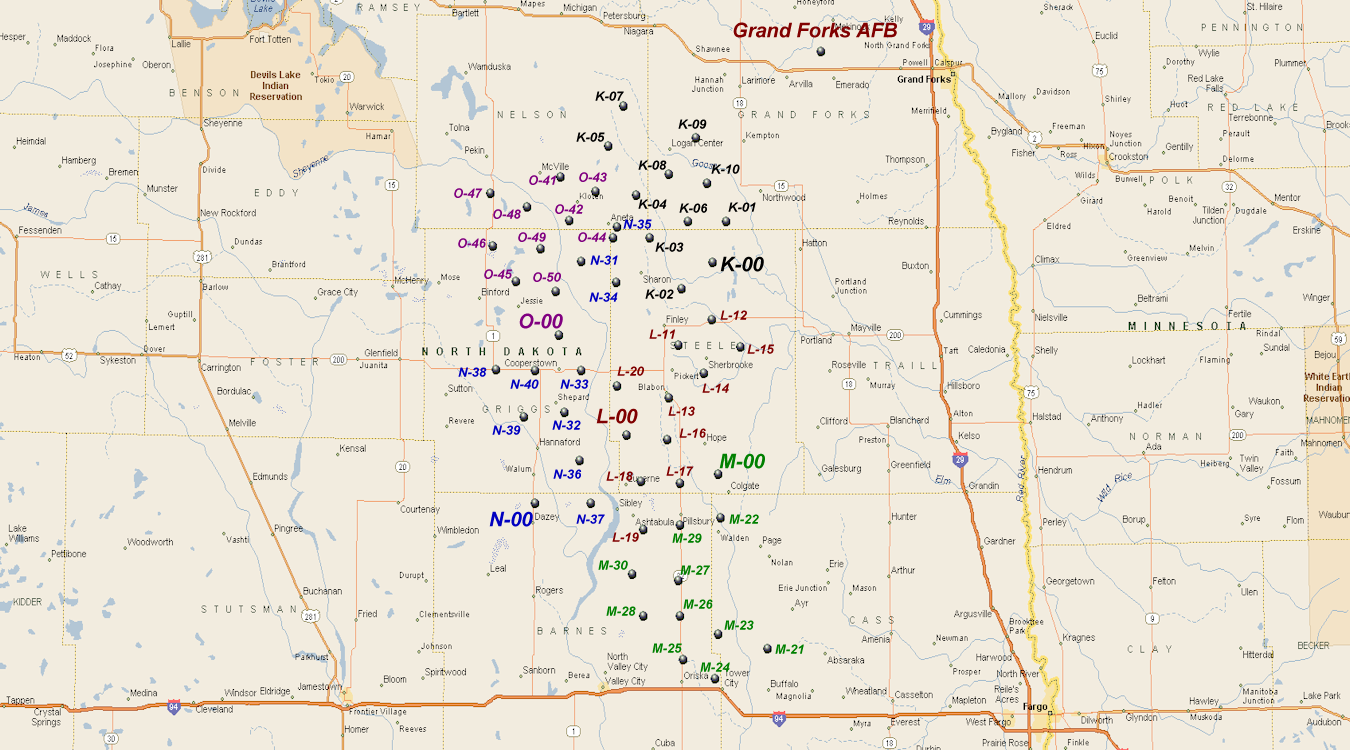 Security building. People had to check in here before entering the silo complex. 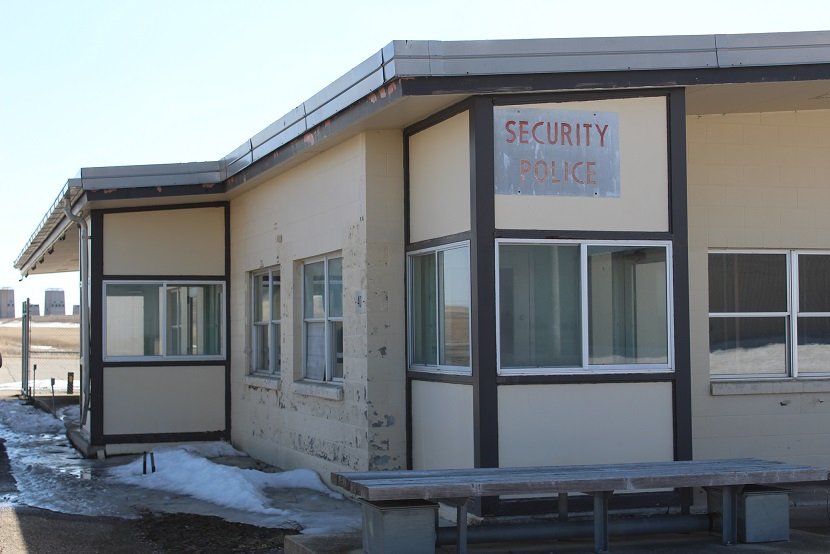 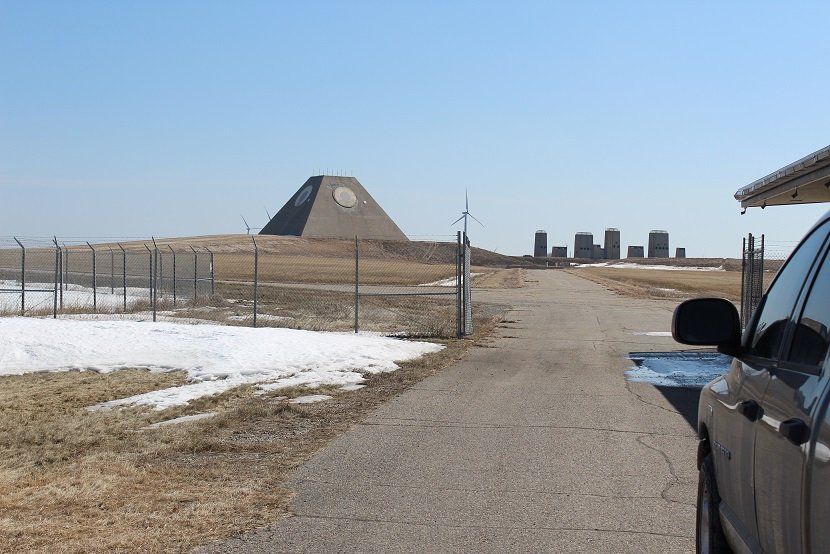 Missile building. Missiles will be put together in this building. 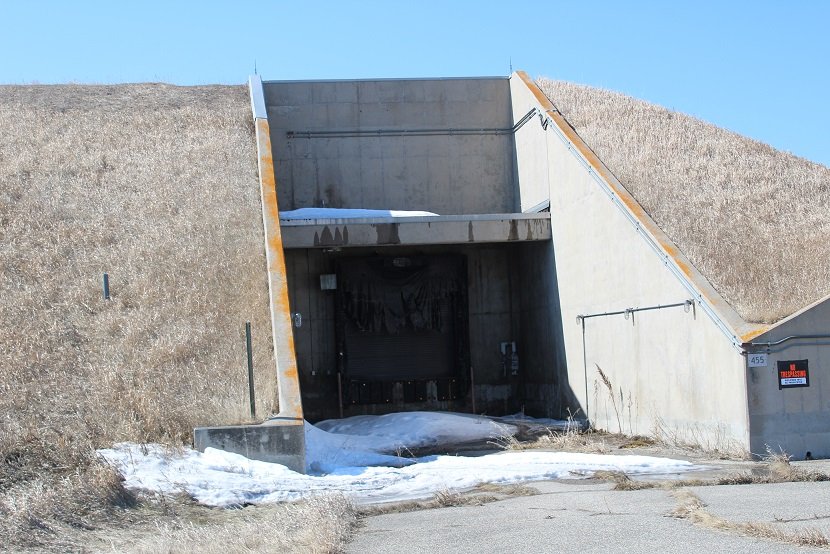 Winch used to pull missiles from the truck. 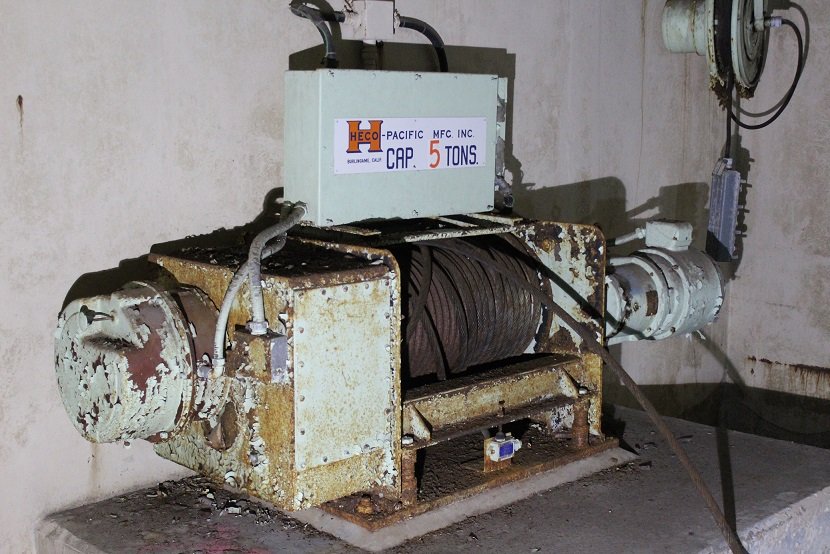 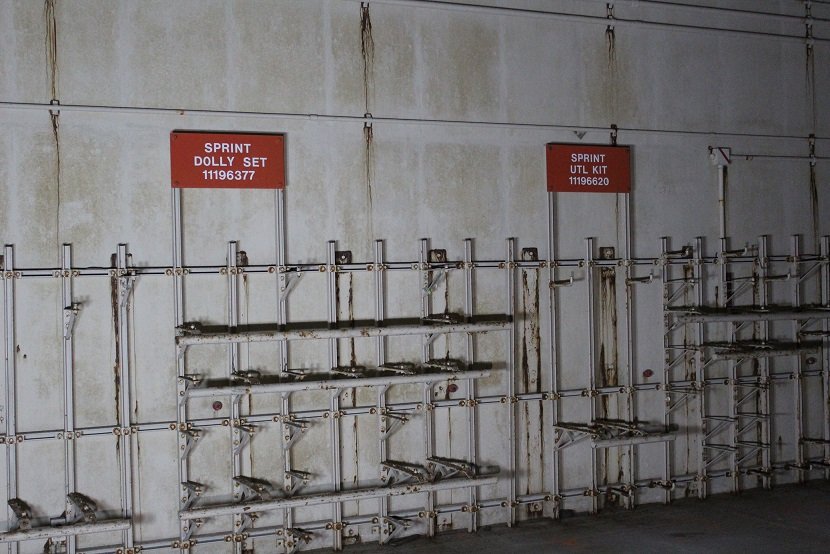 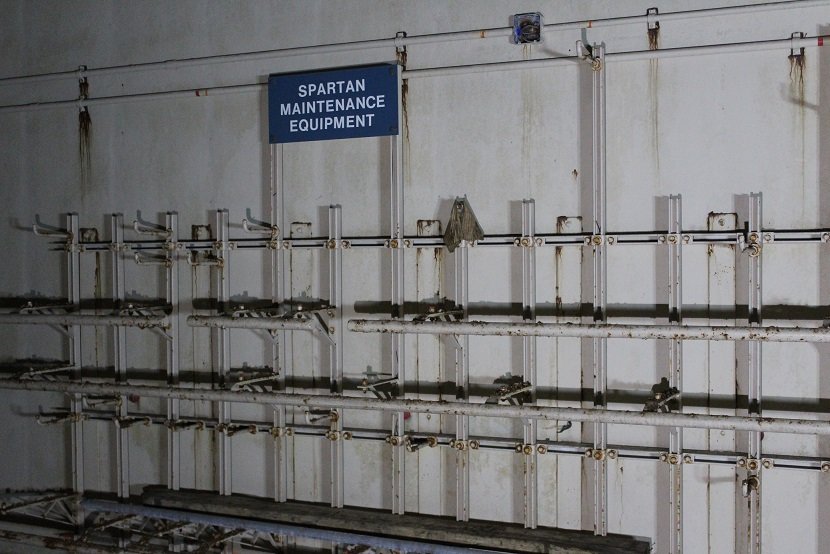 Crane used to carry missiles. The crane moves along tracks on either side. 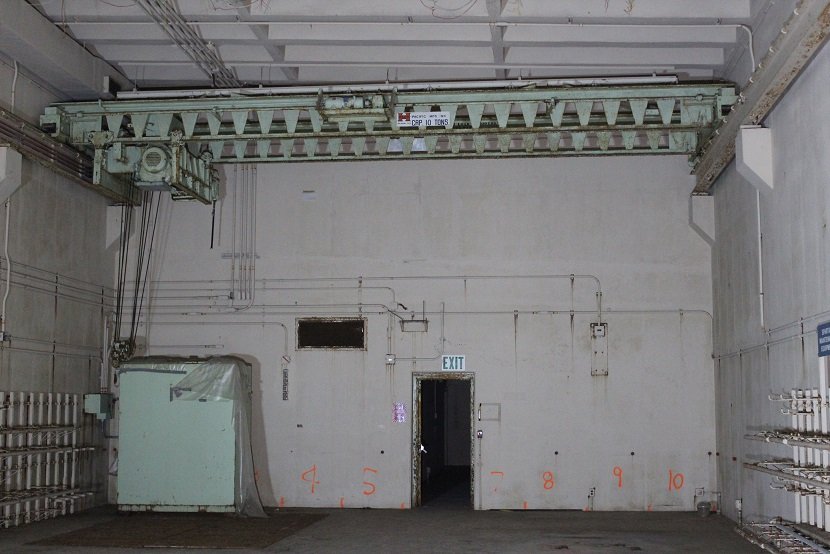 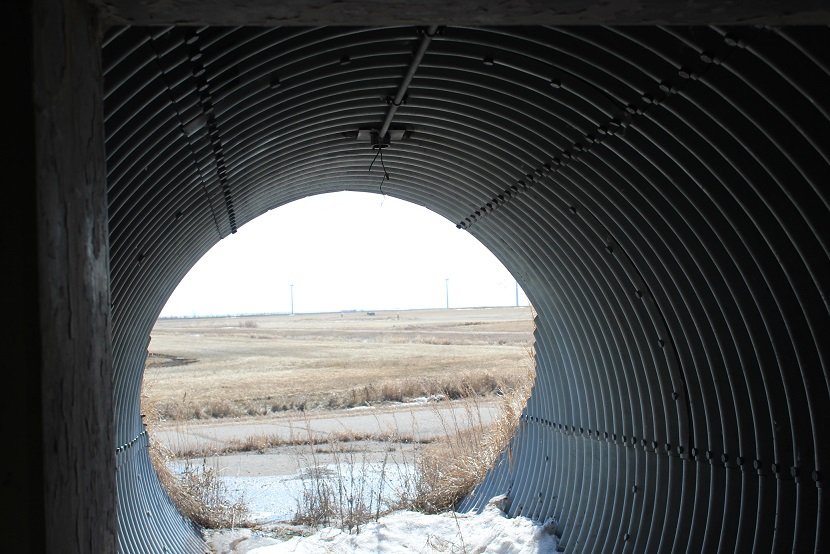 Warhead construction building. This building is inside a security fence with the silos. 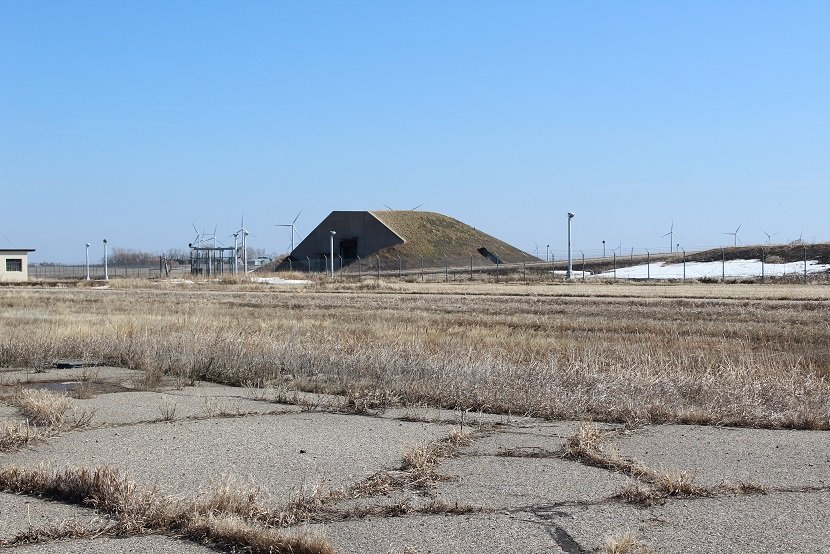 Believed to be a communication box to talk with personnel inside the warhead building. 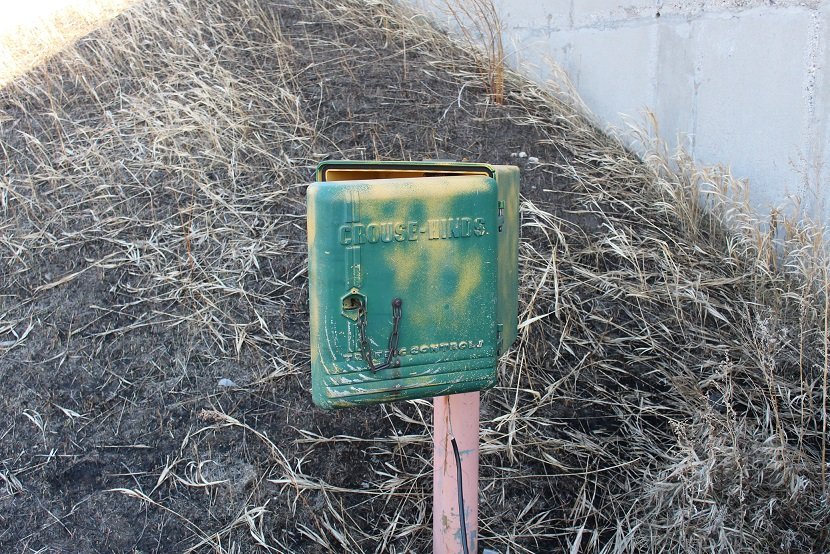 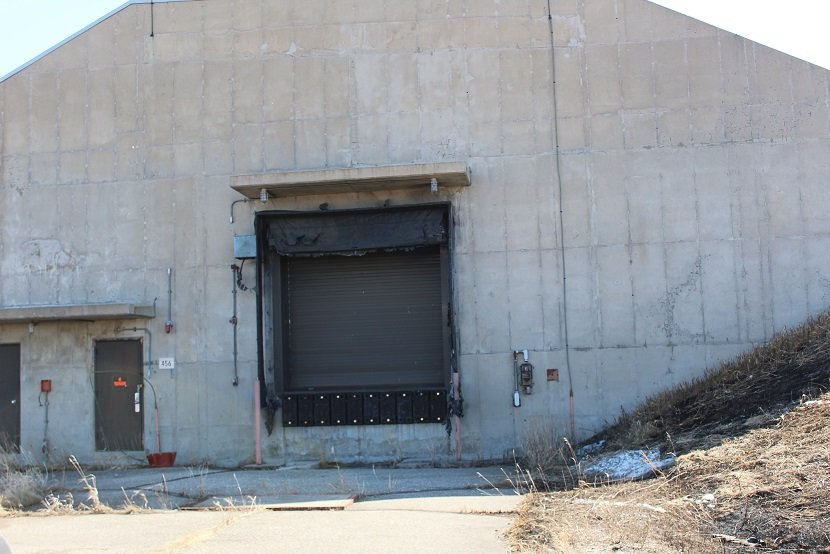 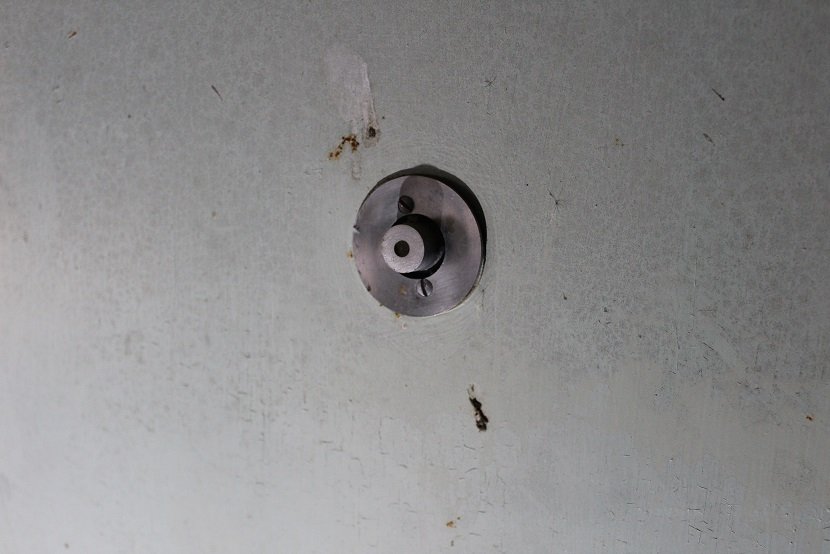 Crane used to life missiles in order to be connected to the warhead. 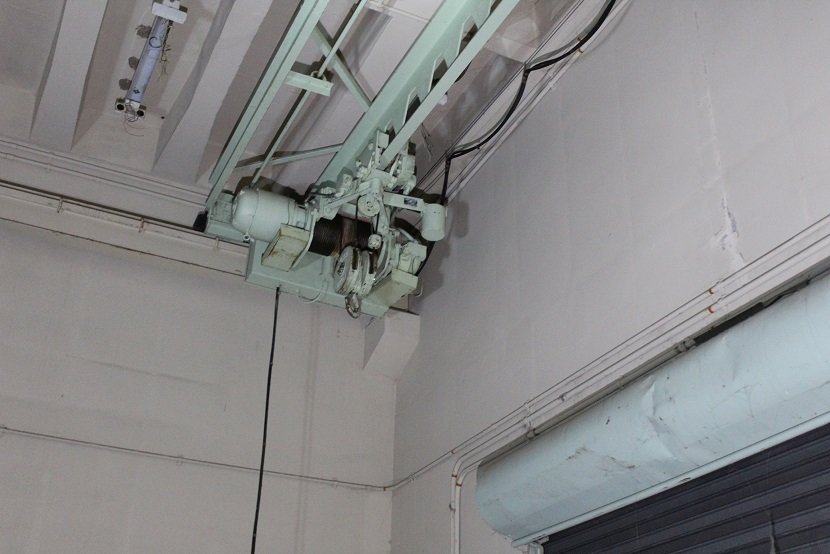 Found this to be an interesting sign, given the fact that there are only two doors into this building and this sign was by each door. 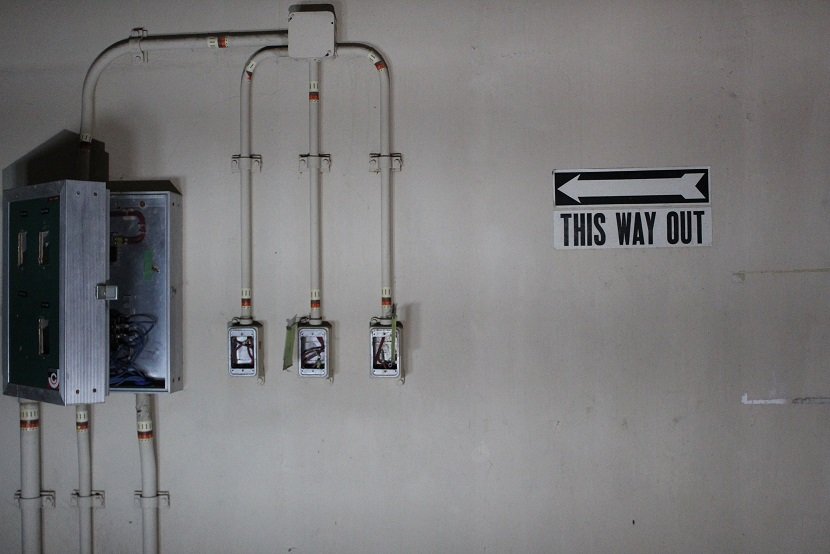 Winch in warhead building. The orange paint was used to mark that people had tested this building for radiation and did not find any radiation. 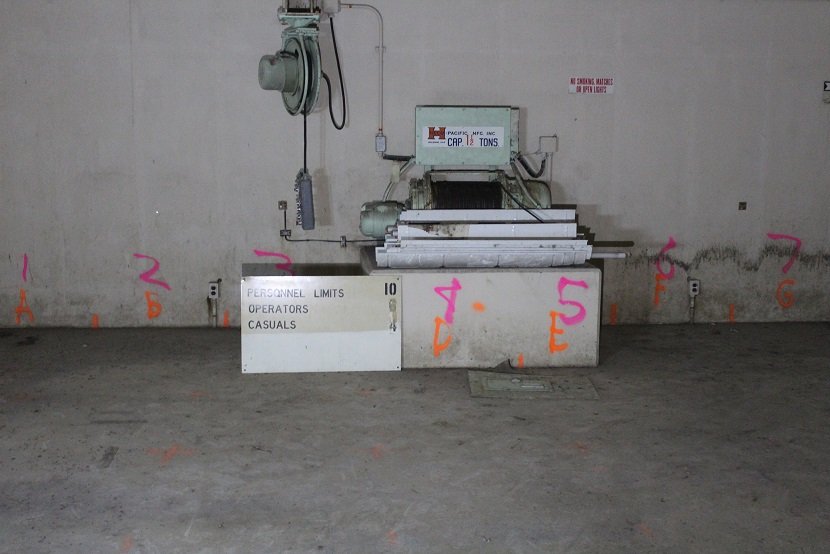 Spring silos. These short-range missiles would explode out of these fiberglass covers and intercept enemy missiles. 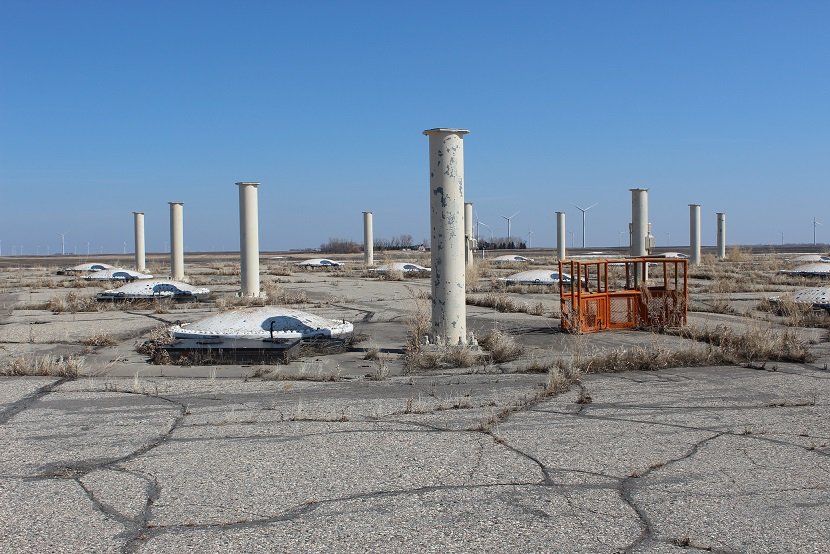 Sprint silos. There are 30 silos on the site. 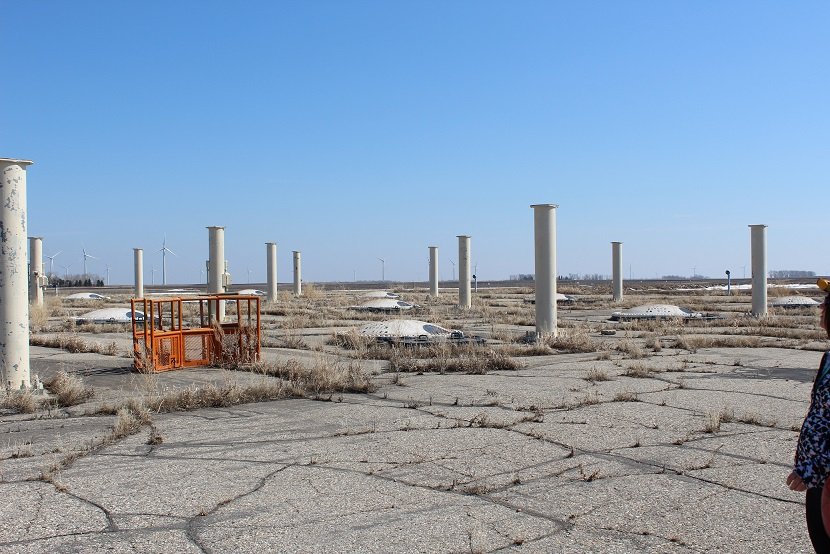 Cover of the Sprint missile silo. 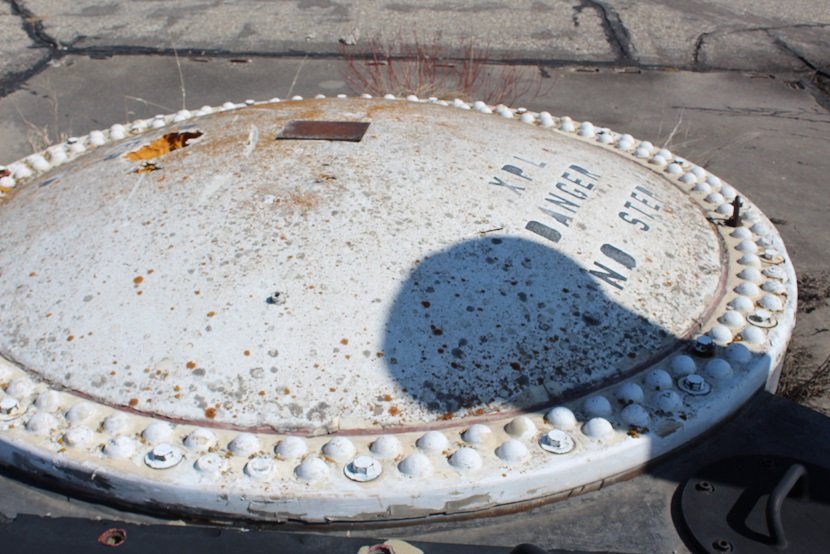 Closeup of a broken cover. There is a second cover about three feet down. 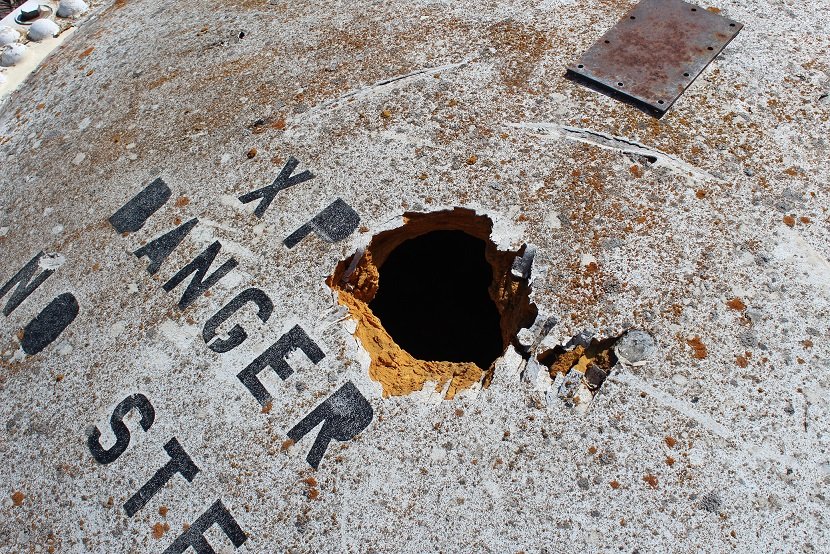 Spartan silos. There are 70 silos for the long-range interceptor missiles. 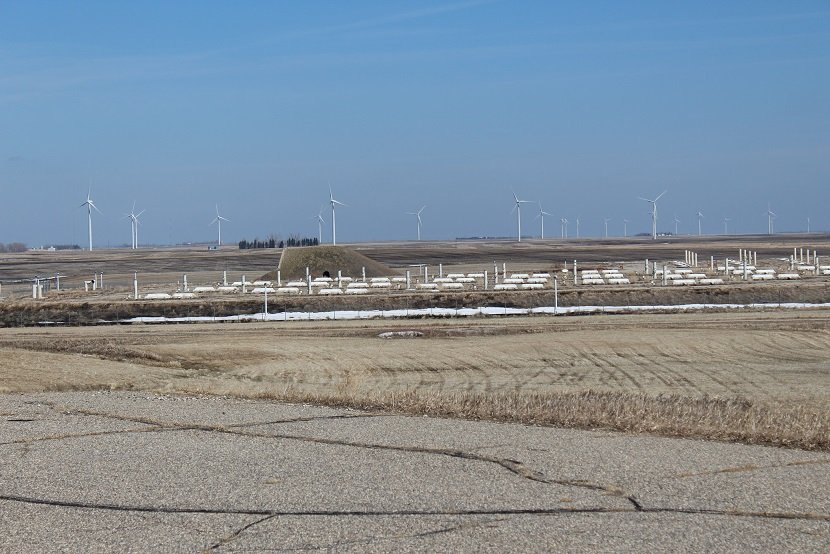 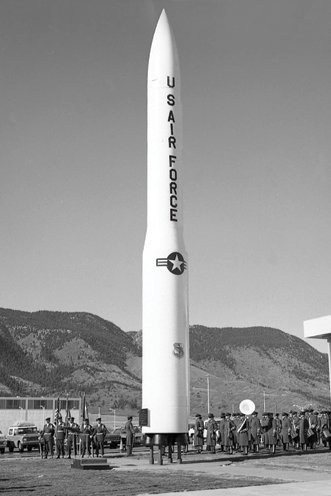 RSL (Remote Sprint Launch) sites which are located 25 miles in each direction from the Safeguard Comples. 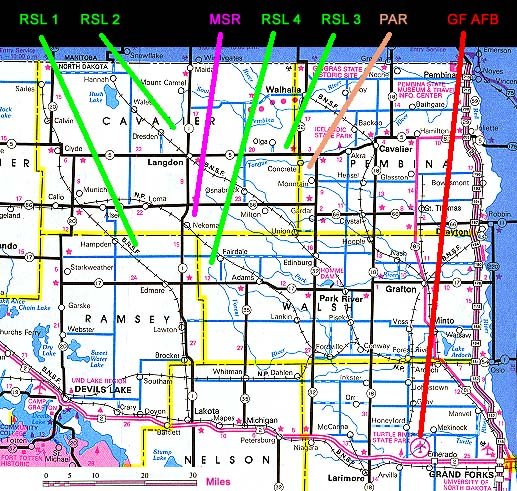 When the Stanley R. Mickelson Safeguard Complex was constructed in 1972, it was designed to be one of twelve sites around the United States. The Safeguard System began in the 1960s as a way of protecting America's ability to strike back in the event of an enemy nuclear missile attack. The system was designed to detect incoming missiles that would threaten the Minuteman missiles, stationed in eastern North Dakota. On paper, from the moment a threat was detected to launch would be six seconds. If the Spartan missile failed to strike its target, Sprint missiles would then launch. Both the Spartan and Sprint missiles were designed to carry nuclear warheads.

While construction was beginning on the site, a large protest was staged on the property. Demonstrators arrived at Nekoma for the "Festival of Live and Love." Among the protesters  were the Chicago Seven, a group responsible for inciting the Chicago riots during the 1968 National Democratic Convention; members of the North Dakota Clergy and Laymen Concerned; and members of the Citizens for a Sane Nuclear Policy, a group opposed to above ground nuclear testing and the war in Vietnam; in addition to a group of locals citizens. The protesters were there for a few days, and ended with the planting of a "peace tree" on the site of the pyramid. Members of the Army Corps of Engineers removed the tree the next day.

The Safeguard Complex is named after Stanley R. Mickelsen, who was born in Minnesota, and graduated from the University of Minnesota in 1917, when he joined the Army. Much of Mickelsen's time in the Army was with coastal artillery units, and antiaircraft units. In 1943, Mickelsen was assigned Commandant of the Anti-Aircraft Training Center at Fort Bliss, Texas. From 1952-1957, he was the commander of the US Army Defense Command, and retired in 1957 as a Lieutenant General.

During the late 1960s, the United States government learned that the Soviet Union had started a massive buildup of ICBM (Intercontinental Ballistic Missiles), which would have the capability to reach the United States. The goal of the Soviet buildup was an attempt to reach a parity in nuclear missiles with the United States. In 1967, US President Lyndon Johnson announced that the Soviet Union had began constructions of limited ABM (Anti-Ballistic Missile) Defense systems around Moscow, and called for a series of Strategic Arms Limitation Talks (SALT). Later that year, Johnson met with Soviet Premier Alexei Kosygin in New Jersey.  Both sides knew that the abolition of nuclear weapons would be impossible, but there would be a possibility of limiting both offensive and defensive nuclear weapons, which was hoped to stabilize US-Soviet relations.

In 1969, Richard Nixon, also a believer in SALT, began formal talks in Helsinki, Finland. On May 26, 1972, after two and a half years of negotiations, Nixon and Soviet Premier Leonid Brezhnev signed the ABM Treaty and an interim SALT agreement in Moscow. In the agreement, the two superpowers agreed to limit the number of nuclear missiles in their arsenals. The treaty also limited strategic missile defenses to 200 interceptors each, and allowed each nation to construct two missile defense sites; one to protect the nation's capitals, and one to protect on ICBM field. At the time, the United States was in the process of building three defensive sites: Nekoma, ND; Whiteman Air Force Base in Missouri; and Malstrom Air Force Base in Montana.  Of the three construction sites, Nekoma was the farthest along, so construction stopped in Missouri and Montana, and Nekoma was finished in April of 1975. It became fully operational with missiles on October 1 of that year.

The following day, October 2, 1975, the US House of Representatives voted to deactivate the project. The US Senate voted to deactivate about six months later. With the deactivation of the Safeguard Complex, unemployment in Cavalier and Pembina counties rose to 7.5% and 8.6%.  Where was an approximate loss of money from these counties of about $1.3 million, mainly from Langdon, Walhalla, and Grand Forks. Towns around the complex also saw major population losses:
Walhalla - 23%
Osnabrock - 40%
Cavalier - 43%
Langdon - 45%
Nekoma - 49%
Mountain - 55%

The doors to the pyramid were welded shut in 1979. The site was ignored until 1991, when the US Senate, in their defense budget, included $10 billion to reactivate the base as part of President George HW Bush's Strategic Defense Initiative, or "Star Wars" Program.

Today, the area around the missiles is owned by the Cavalier County Job Development Corporation, with hopes of turning the pyramid into office space, and an interpretive center in the main guard building. The rest of the land was purchased by a group of investors, who plan on developing the rest of the property.