Every summer since 1956, people of Scottish heritage--and people otherwise just looking for a good time--have gathered on the slopes of Grandfather Mountain (the highest point in North Carolina) for the Highland Games. In recent decades, these games have become one the most popular traditions in the the area and one of the leading celebrations of Scottish heritage in the nation. Combining ancient traditions in athletics, music, dance, dress, food and drink, the Games arose out of a long history of oppression and resistance, both in Scotland and the mountains of North Carolina. 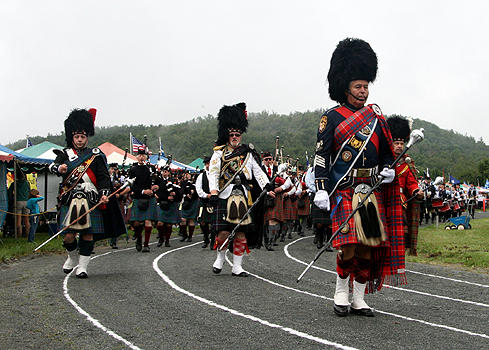 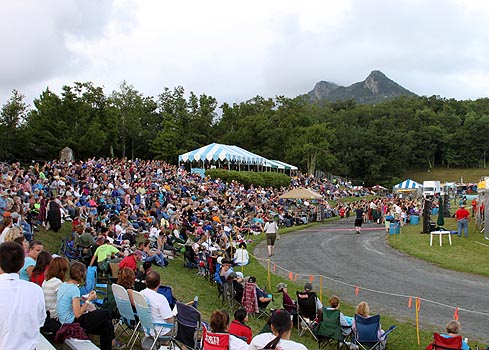 The Grandfather Mountain Highland Games are North America's version of centuries-old traditions, as described on the Games' website:

Highland Games as practiced today were perpetuated by the clans of Northern Scotland but began far earlier among the Celts of Scotia (the name which Latin writers gave to Ireland)....Ancient traditions insist that the same kind of contests in running foot-races, leaping, vaulting, wrestling, lifting heavy weights and putting stones (as one sees today) were begun in pre-Christian times.

[In the Christian era] other contests in racing and associated athletics began at religious fairs on various holy days as well as at cattle fairs on the quarter days of Scotland's calendar. Soon, sporting contests were taking place at the conclusion of military musters called "wappinschaws", held by the various clans. The clans' warriors needed to test their physical prowess in much the same way as modern soldiers engage in physical training. It was at one of these in 1574 that "tossing of ye barr" (caber- or log-tossing) first appeared on record....Clan chiefs and monarchs...used such musters for selecting the best runners to serve as couriers [and] competitions in piping, fiddling and playing the clàrsach or Gaelic harp had [also] long taken place within the territories of the clans.

The origins of many events seen today at the Grandfather Mountain Highland Games can be traced back to the aforementioned...religious fairs, military musters and cattle fairs. Such fairs were soon to cross the Atlantic. Indeed, in pre-Revolutionary War North Carolina, athletics and piping were enjoyed by Highland immigrants at two famous cattle fairs: At Laurel Hill (present-day Scotland County) and at modern-day Ellerbe (Richmond County).

The Act of Proscription, passed after Prince Charles Edward Stuart's defeat at the Battle of Culloden in 1746, forbade Highlanders to bear arms, to play the bagpipe, to speak their ancient, classical language of Gaelic, to wear tartan, or even to gather in groups. Almost 40 years elapsed before the Act of Proscription was repealed. During that time, while the native Gaels were being burnt out of their homes and being replaced by Lowland sheep-farmers and their sheep, much of Scotland's predominantly Gaelic culture was lost. The history of the Grandfather Mountain Highland Games is well-documented, and we owe a lasting debt of gratitude to the co- founders, the late Mrs. Agnes MacRae Morton of Linville and Wilmington, NC, and Donald F. MacDonald, formerly of Charlotte but now of Edinburgh, Scotland.1