The City of Nitro was founded during World War I as a town built around Plant "C" that supplied 700,000 pounds of Nitro-Cellulose, or gunpowder, a day. Due to this, the city was known as Nitro. There was a mixture of nationalities in the area when the War Department broke ground on the first barracks on December 23, 1917. The town flourished into a booming industrial town in a matter of months and allowed for the expansion in population and new businesses.

Marker explaining the development of the town of Nitro, largely due to the creation of Explosives Plant "C." 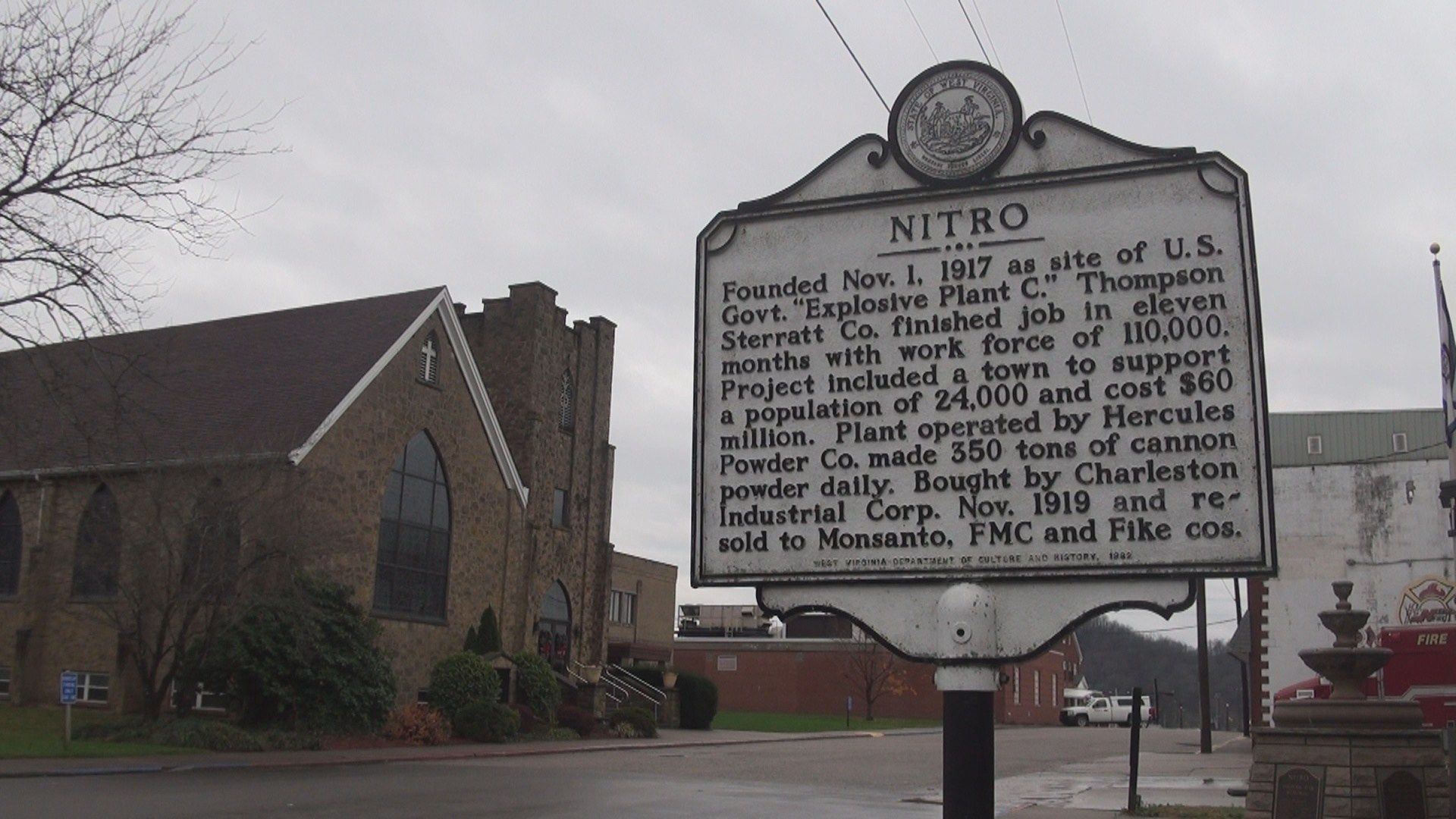 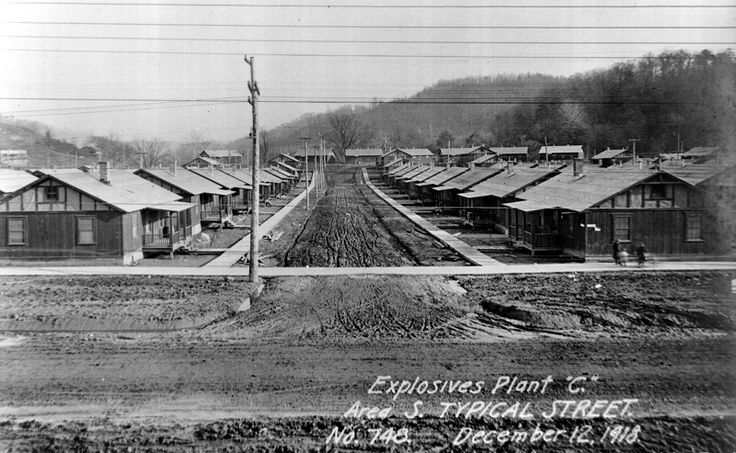 Receiving yard for the Nitro-Cellulose plant. 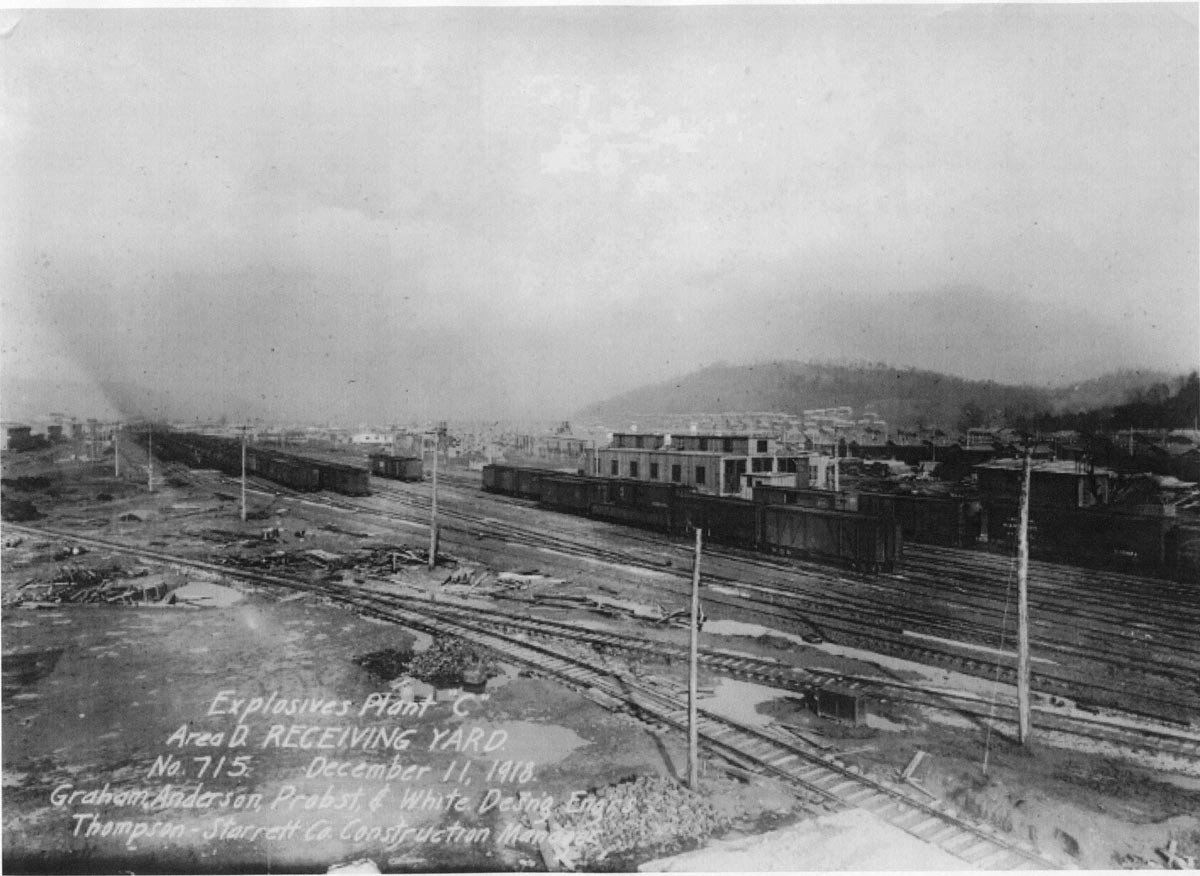 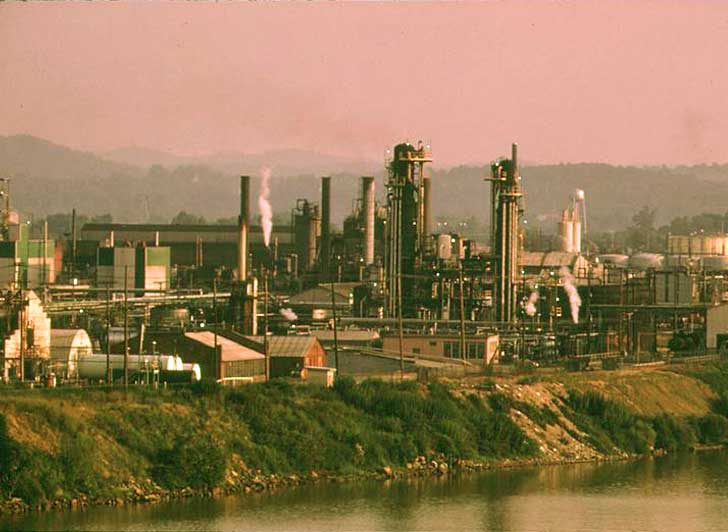 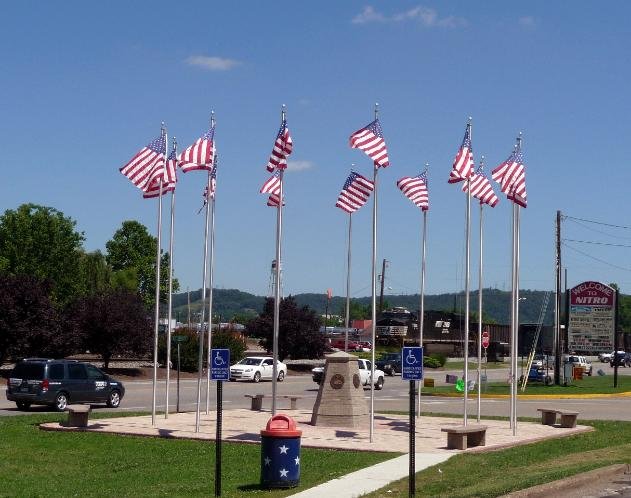 World War I Doughboy statue located in NItro's Living Memorial Park on the corner of 21st Street and 2nd Avenue. 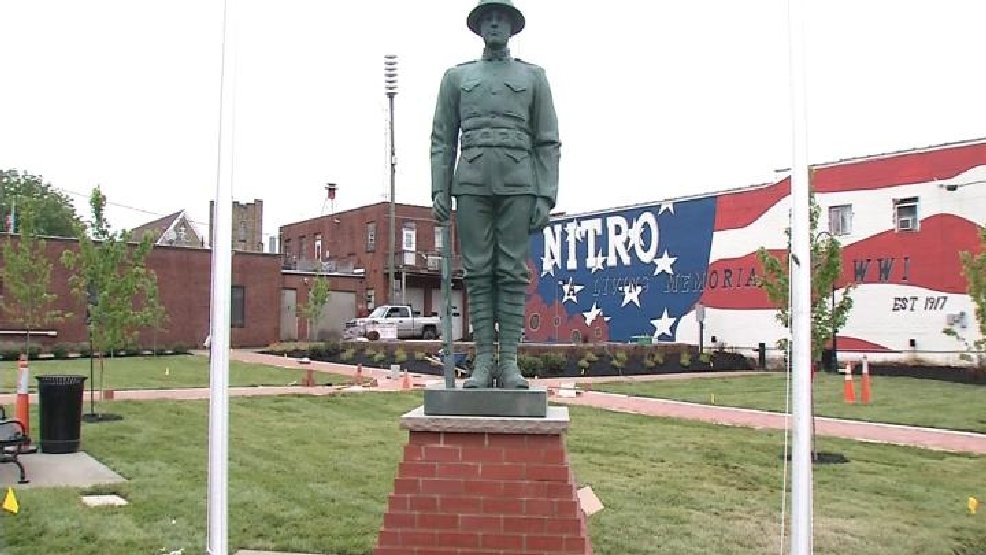 When the United States entered World War I, it immediately recognized that it had a gunpowder shortage. Officials needed to find areas to alleviate the shortage that would be somewhat resistant of an attack, but also able to get supplies to the plants by train. Nitro was chosen as the first area to build a plant. The Deficiency Appropriations Act of October 1917 allowed for the funds to build this plant and three others. Each plant was to make 500,000 pounds of gunpowder a day, but the War Department increased it to 700,000 pounds so that only two plants would be required--one at Nitro, West Virginia and a second in Nashville, Tennessee.

Ground was broken on construction of 27 barracks that would house 200 men each on December 23, 1917. Practically overnight, the town was booming with thousands of workers and materials arriving. During the eleven months it took to build the plant almost 110,000 workers were on the payroll and 104 railroad cars of materials were used to turn a muddy field into a sprawling piece of American engineering.

The war came to an end on November 11, 1918 and the city of Nitro housed almost 24,000 families. Purportedly, at one time the City of Nitro had a higher population than Charleston. Of course, this was short lived since the war was over and the United States no longer needed significant amounts of gunpowder. Plant “C” was put up for sale after one week of operation and the excess materials became surplus. A firm backed by several wealthy businessmen from Charleston, WV and New York bought the business and residential facilities for $8,551,500. Instead of the housing being provided by paying rent, the businessmen gave residents the opportunity to buy their homes at a very low cost. Most of the residents took up this offer but many were also willing to just pay the rent.

"The place was built up so fast,” one says, "that the workers could scarcely find their way home in the evening. Most of the houses looked alike and two more blocks would be erected while the men were at work during the day. So, when a man started home he wouldn't know which house was his."

New businesses began sprouting up in the town and that brought in new residents. The town was booming as the wartime memories faded. The Charleston Industrial Corporation was able to promote the attractiveness of this business hub to attract other businesses. There was a surplus of unused buildings and machinery that could be used and employed many people in the town. This brought in new people from out of state.

Once the munition plant was closed the chemical industry turned its eyes towards the Kanawha and Putnam counties area. This would include the City of Nitro. In 1921, Goodyear Tire and Rubber Company saw Nitro as an ideal place to set up a plant to create their products. They incorporated the Rubber Services Laboratories and built that factory in Nitro in 1922. In 1929, Monsanto purchased the plant. In 1936, The American Viscose plant began building in Nitro and this plant manufactured rayon staple fibre. This was one of the largest plants in Nitro, employing over 1,000 men and women and was the largest staple rayon plant in the word by 1945. There were other chemical companies that resided in Nitro: Ohio Apex Chemical, Elko Chemical, the Nitro Pencil Company, the Nitro Soap Factory, and Fike Chemical. In February 2012, Monsanto agreed to settle a case covering Dioxin contamination around a plant in Nitro that made Agent Orange during the Vietnam era. Monsanto agreed to pay up to $9 million for cleanup of affected homes, $84 million for medical monitoring of people affected, and the community's legal fees

Today, the once-dominant chemical industry has waned in Nitro and the surrounding area. Industry is still part of the region's history and is very much celebrated throughout the year with different festivals. Nitro celebrates its military history with parades and many monuments throughout the city. Examples of the celebrations are the Nitro “Boom Town” event and the “Nitro Horse Parade.”