The Stone-Tolan House was constructed sometime between 1790-1820 and is the oldest building in Monroe County. 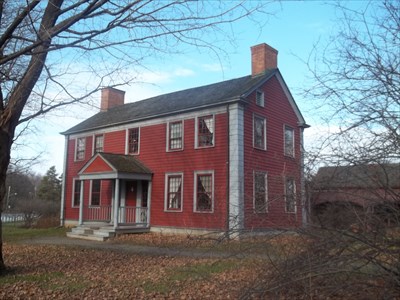 This site served as both the home and the workplace for pioneer Orringh Stone and his wife Leisje (known as Elizabeth). The original part of the house, which includes the kitchen, was built in 1792. The building then expanded to accommodate the Stone's growing family and business. The tavern section of the building was a place for community members to meet and discuss over drinks and food (1). In fact, the tavern hosted the first meeting of the town of Brighton in the early 1800s, where town officials were elected and legislation written (2). Other rooms in addition to the tavern include the kitchen, parlor-bedroom, summer kitchen, orchard herb and kitchen gardens, smokehouse, and privy.

When Orringh Stone passed away around 1840, his children sold some of the property. One buyer was John Tolan, who purchased 50 acres in 1850 and had the house restored. One of Tolan's daughters later sold the house to the Landmark Society in 1956, and they have held ownership over the historic site since that time.

Closed January through March. Drop-in visitation welcomed on the fourth Friday of the month, April through December. School and group tours can be scheduled outside of regular drop-in hours.

Bridging the Divide: Museum Sites that Blend STEM and History

This tour maps locations in Rochester that bring together the seemingly disparate subjects of STEM and history. The goal of this project is to attract participants of all interests and backgrounds. One does not have to enjoy just history or just science to appreciate the sites. Therefore, people interested in any of these subjects, from a professional or hobbyist standpoint, who would like to explore them in further detail and explore Rochester would engage well. In addition, this tour could be a potential tool for educators, especially middle and high school teachers. The subjects are often stratified in schools, and students rarely experience or see overlap. This project can help teachers plan field trips, or even help parents introduce their children to the ways in which different fields and subjects blend. The project will not only foster new interest but also build onto the existing interests of participants. Furthermore, it tries to dive deep into specific STEM concepts, like horticulture and engineering, ones that high school students might not be exposed to. The sites on the tour can help students experience specific subject areas in a new context and present them with potential avenues to pursue in their future careers and/or college education.