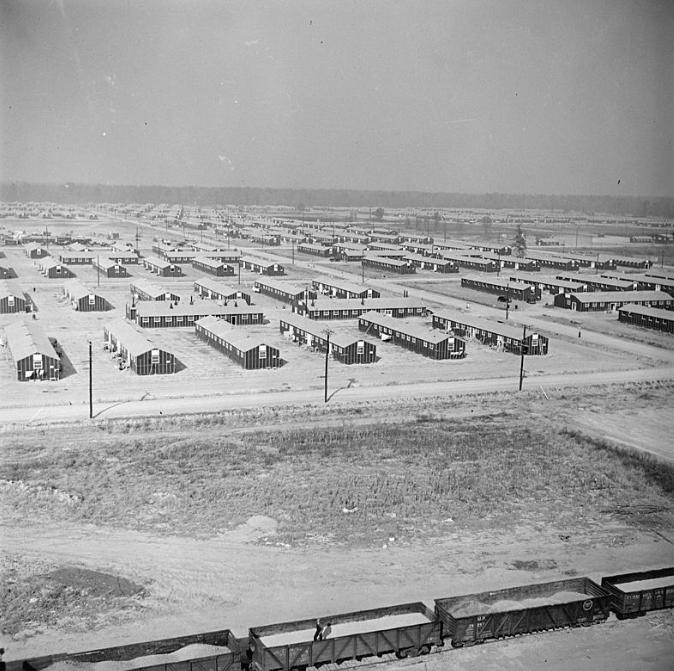 Closing of the Jerome Relocation Center, Denson, Arkansas. Last glimpse of the Jerome Center as residents leave by train to take up their residents at another center. Source: Charles E. Mace, NARA 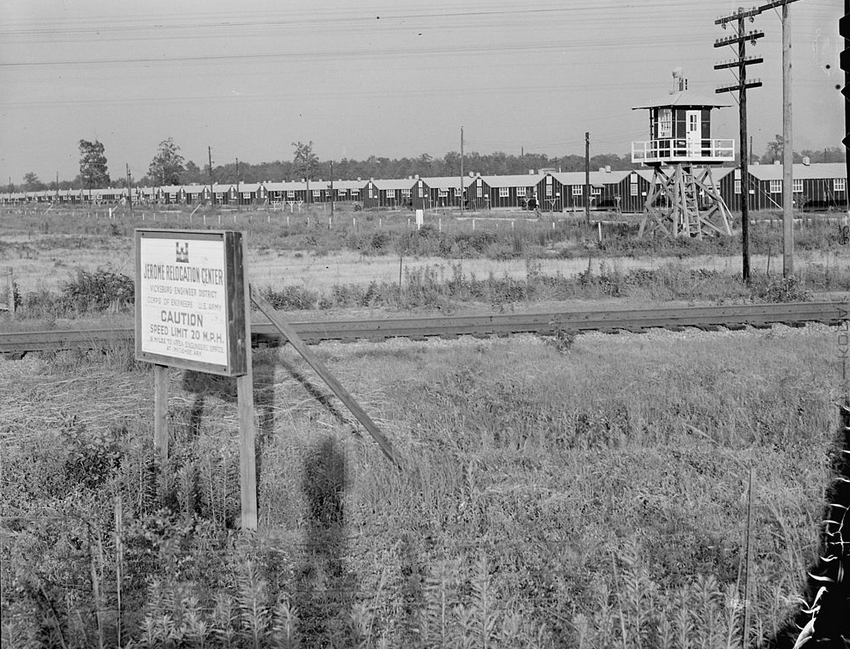 Arkansas was chosen by the War Relocation Authority as one of the states that would house prison camps for Americans of Japanese descent. Two camps were established in  Arkansas in 1942, Rohwer in Desha County and Jerome in Chicot and Drew counties.

Jerome was the easternmost of the War Relocation Authority camps located in the Jim Crow South. It was the last of the camps to open and the first to close. Jerome was in operation for less than two years.

The Jerome campsite is today a working farm. The barrack foundations that were in place in 1953 when it reverted to agricultural use are no longer evident. U.S. Highway 165 was moved east of the railroad tracks in 1946, where Japanese Americans originally disembarked from the train cars and entered directly into the camp.

The camp was established on heavily forested and swampy land and was late to open. It was still largely unfinished when the first inmates began to arrive from California. Jerome also had a significant population from Hawaii, mostly family members of men who had been interned in Department of Justice and U.S. Army camps.

Arkansas Governor Homer Adkins, a former Ku Klux Klan member, opposed the building of the camp in his state and agreed only after being assured by the War Relocation Authority that Japanese Americans would be held under armed guard by white guards and would be removed from the state after the war. Akins also blocked Japanese American students from attending the Arkansas State Teachers College, as he felt it would provide inroads to African Americans who wanted to enroll in college.

There were more than 610 buildings at Jerome, with the majority of the structures having been completed by the inmates. Although space was reserved for schools, a church, and a store, these structures were never built. Camp inmates grew 85 percent of their own vegetables in crops outside the fence.

The population of Jerome fluctuated. At its peak, Jerome held 8,672 prisoners. By February 1944, that number had dropped to 6,554, making Jerome the smallest of all the camps. After Japanese Americans were moved from Jerome to other camps in 1944, it was converted into a prisoner of war camp for Germans.

There is a granite historical marker for the Jerome Relocation Center noted by the Arkansas Department of Parks & Tourism at 1603 U.S. 165 South, at Dermott.