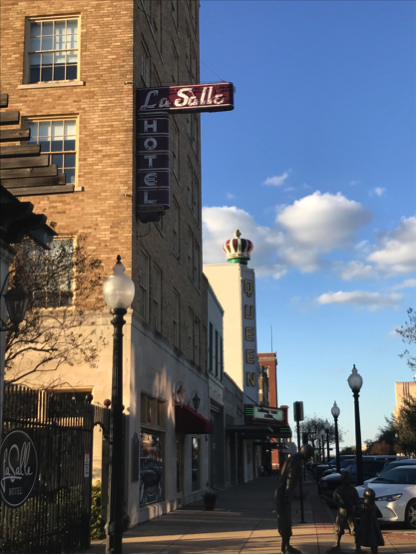 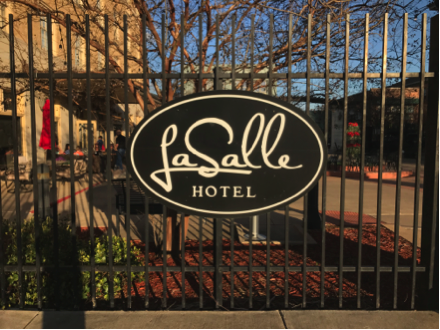 To understand the history of the La Salle hotel, one must first understand the historical provenance of the name La Salle itself. Robert La Salle was born into a wealthy merchant family on November 22, 1643 in Rouen, France. Best known for his expeditions around the Great Lakes and Mississippi River, La Salle became a very prominent explorer and was able to develop a number of important trading posts along the waterways and coastlines he visited. These explorations eventually led to France claiming the territory surrounding the greater Mississippi River Basin that they called Louisiana, which later became a large portion of the United States. La Salle made his final voyage to North America, in parts of what is now the United States, in July of 1684, where he was met with a wealth of misfortune. During this voyage he lost two of his ships, which marked the beginning of the end for the explorer and his crew. The first of his ships was captured and ravaged by pirates, and the second decided to abandon La Salle and head back to France. The last remaining ship in La Salle’s fleet landed at a place close to what is now Matagorda Bay along the gulf coast of Texas, which was almost 500 miles from their intended location the Mississippi river. In order to get back to the Mississippi, La Salle and his crew traveled up the Lavaca River on March 19, 1687 where the voyage was abruptly ended by the brutal murder of La Salle.1

At the turn of the 19th century, Bryan was a small agriculture-based town that benefited from the fertile soils of the Brazos River. As a result of the cotton trade, Bryan had a central railroad station that would eventually face the La Salle hotel from across the street. Robert Wistar Howell, who was a savvy businessman during the early 1900’s in the Brazos Valley area, saw an opportunity to open a new hotel in downtown Bryan to accommodate visitors. After coming up with this idea, Howell contacted George Walling, an architect from Austin, Texas, to discuss plans for a hotel that would be unlike any other in the area. Walling, who was born in 1901 in Austin, Texas and attended Kemper Military Institute, was educated at the University of Texas as well as the Fontainebleau School of Fine Arts in Paris, France from which he used his degrees to open his own Austin-based architecture practice at the age of 24.2 But it wasn't until his construction of the La Salle Hotel that he truly made a name for himself, as the hotel was and still is one of Walling’s most significant architectural accomplishments.

The La Salle was completed in 1928, and at the time the seven-story hotel would be the tallest building in Bryan. The first floor had a reception area, restaurant, and coffee shop, and the second floor had a ballroom and convention center. The remaining five floors had about 100 guest rooms. The La Salle went on for decades as the premier hotel in and around the Bryan area. However, due to the decline in tourism along with the movement of the railroad station, the La Salle was transitioned to a nursing home in 1959 and remained that way until 1975.3 After the nursing home was shut down it was converted into an apartment building until 1980. In 1990, a town developer by the name of Reid Monroe looking to revive the La Salle bought the hotel and began renovating. Unfortunately, Mr. Monroe was helping someone fix the marquis sign outside the hotel when he fell to his death. To this day, guests as well as employees say that Mr. Monroe along with the numerous people that have died in the nursing home haunt the hotel.4 Another historical tribute that the hotel is known for is that until 1934, the La Salle was the preferred meeting place for the remaining survivors of General Hoods’ Civil War cavalrymen who would annually meet in Bryan.5

In the early 2000’s, Bryan went through a campaign to revitalize the town back to its original glory and with it, the La Salle hotel went through a major renovation creating the beautiful historical hotel that it is today. The most recent transition that the hotel has gone through is the renovation and renaming of its restaurant to Downtown Elixir and Spirits. Interior renovations as well as a new menu have transformed the old restaurant into a New Orleans style atmosphere as well as an elevated Cajun menu. This change is without doubt a nod to the hotels French namesake.6