Just south of central Texas, right in the Llano uplift, sits the beautiful and majestic Enchanted Rock State Natural Area. This pink-granite dome is regularly visited each year, and is a special home to species like Hammock ferns and Fairy Shrimp. Enchanted Rock serves as a refuge for many different wildlife plants and animals. The significance of this region to the state of Texas increases each year as more and more artifacts and species are found within Enchanted Rock, as well as furthered weathering and erosion of the rock itself. Bought by the State of Texas and opened to the public in 1984, Enchanted Rock officials now have to limit visitation in order to help preserve the resources within the park. 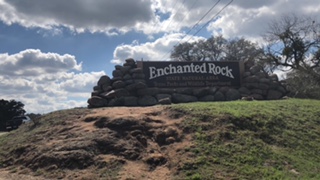 First thing to notice when walking to main trail. 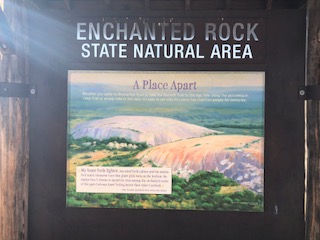 Pathway to main trail. Use this to go to the top of the Enchanted Rock dome. 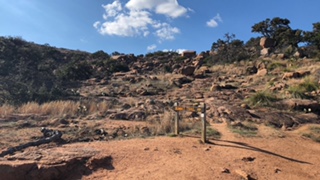 Vernal Pools that are located on Enchanted Rock. 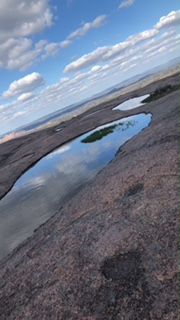 View of part of the Enchanted Rock dome, this picture was taken on the Little Rock dome. 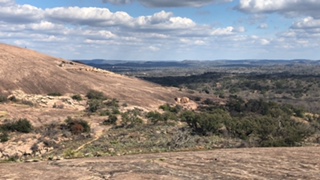 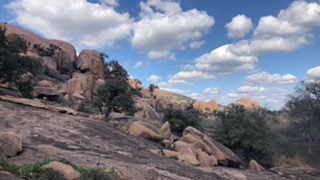 View looking down from Little Rock. 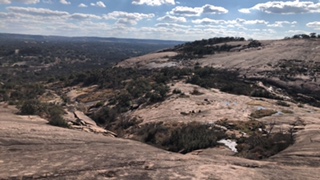 Close up of this beautiful pink granite. 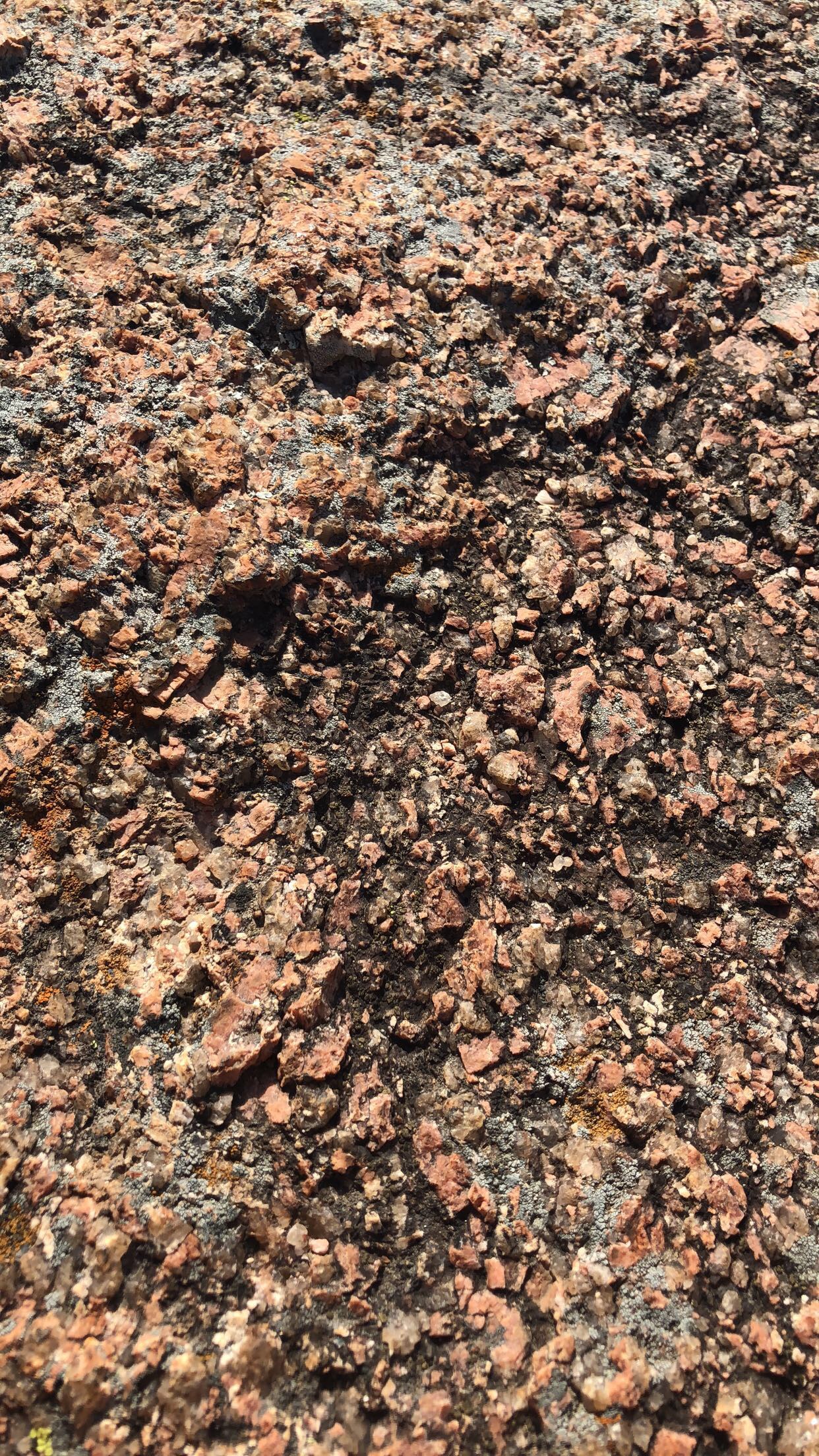 Ground view in the middle of Enchanted Rock dome and Little Rock dome. 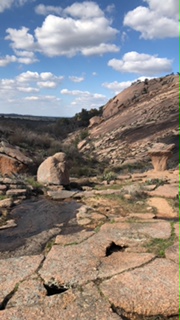 The name Enchanted Rock was given by the Comanches, and gives such an intriguing impression just by how it rolls off the tongue.1 This rock mountain is a highly visited park today mostly because words or pictures alone, simply do not give this captivating landmark justice. With its largest peak reaching at 1,825 feet above sea level, this majestic landform can be seen from miles away.2 “Quartz, granite, gneiss, flint, schist, feldspar, and limestone” have all been found in this exquisite region.3 This huge rock is made up of many layers and undergoes a process called exfoliation. The best visual to explain how that would look is picturing the unraveling of onion layers. This geological feature of the SNA4 is important to Texas history because the processes of weathering and erosion also show the history of the land, by the fossils and impressions on domes that are found within the area. What is seen by the eye at Enchanted Rock SNA is only a taste of what the region truly includes. “Like a great iceberg at sea that hides most of its mass underwater”, what you see above ground today is just a portion of the much larger batholith5 of Enchanted Rock that extends about 62 miles in total length.6 Enchanted Rock SNA is one of true significance to Texas and its geological glory.

This intriguing land was guarded by natives since about thirteen-hundred years ago with the Comanche tribe being the most protective and dominant over the region.7 “The area around Enchanted Rock SNA was one where settlers dared not go except in heavily armed groups”.8 That's because many fights broke out between tribes around the area of Enchanted Rock, which also lead to many mythical stories and events that are forever encompassed within the park’s atmosphere. Stories such as a woman jumping off the rock after seeing her whole tribe slaughtered, to stories of a man finding and saving his true love just before a tribe that had kidnapped her, burned her alive, lead people within the region to declare unusual events. Things such as weird noises and cracks heard within the domes, faint hearing of a screaming woman, ghost fires flickered at the top of the dome’s at night, and even just the presence of spirits around the area, were said to be noticed by inhabitants and visitors of Enchanted Rock. All of these supposed ‘enchanted’ or mystical tales are in fact how and why the Comanche tribe decided on the name of this truly majestic rock.

As much of Southern/Central Texas, the zone in and around Enchanted Rock State Natural Area is one that is typically dry with “sparse vegetation”.9 The reason Texas was hard to settle when first discovered was because even though it contained all this land, it still had little to offer. This held true for Enchanted Rock, but, just like other parts of Texas, it was said that the “inhabitants hunted the great bison, the mammoth, and the mastodon”.10 Just like many other parts of Texas, Indian tribes were attracted to this land and roamed through the area of Enchanted Rock for hunting and shelter purposes. During the 18th-century, Spaniards started to come into the area, settling by the San Saba River. They settled there in hopes of finding gold and silver, which other people11 heard about and decided to also come and search for the goods. Unfortunately, what was found, was not enough to make a huge profit off of, but, even with no real goods found, it still lead more people to start inhabiting the area around the rock.

The Pinta Trail, yet another historical marker in the region enclosing Enchanted Rock SNA, was first developed by native Indians, then soon adopted by Spanish explorers and German-Texans. The Pinta Trail was one that connected north and south Texas for native tribes and explorers to use. What helped boost this settlement of the Enchanted Rock region was when Spanish Explorers started to use the trail in the 1700’s to travel from San Antonio up westward, encountering Enchanted Rock in their eyesite. The trail extended about 17 miles from the rock, encountering Fredericksburg on its path to the San Saba River. The Pinta trail also helped lead many German-Texans to the area of Fredericksburg and Llano, evolving and diversifying the culture of the region. This is part of the reason visitors will see some German shops and bakeries in areas close to Enchanted Rock.

The region of Enchanted Rock State Natural Area is historical not only because the inhabitants that encountered it, but because of the unique structure and life of this captivating granite rock. Its ability to create ecosystems within the small depressions of its rock, such as vernal pools12 allows Fairy Shrimp and Rock Quillwort to exclusively survive in the region.13 Interlocked with the views encountered atop the rock and the beauty that natural forces made into what we see as Enchanted Rock, there is no question why this location is one of true significance to Texas. The history and importance of Enchanted Rock State Natural Area is one that will continue for centuries.