In Academic plaza, on Texas A&M University’s campus, lies a statue of Lawrence Sullivan Ross or known by students as “Sully”. This statue is the oldest sculpture on the entire campus. The statue was dedicated to Sully in 1918 and has stood proudly in the heart of campus ever since. The statue was commissioned by Pompeo Coppini, a man who created many statues in the state of Texas during this time. Students on Texas A&M campus look at Sully as a good luck charm and often put pennies at his feet in hopes that he will return the favor in the form of a good test grade. Every student is taught about the Sully statue from the moment they take their first Texas A&M campus tour. A majority of students on Texas A&M’s main campus see sully every day in admiration as they pass by. Sully is a vital part of Texas A&M tradition that is kept alive by the student body. 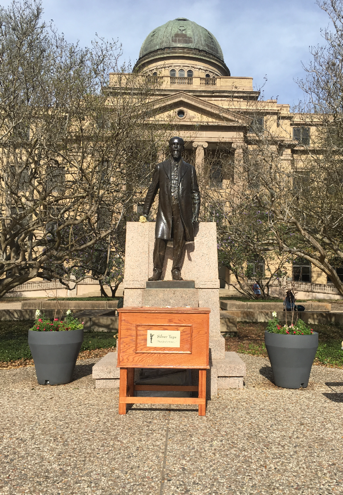 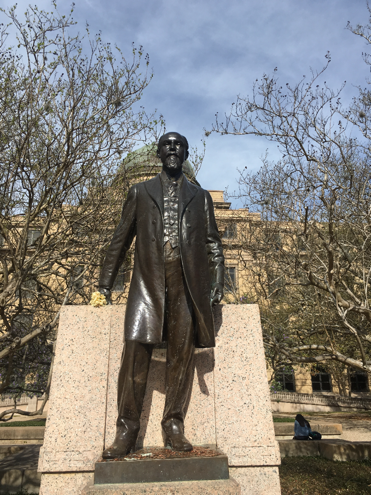 Pennies located on the feet of the Sully Statue 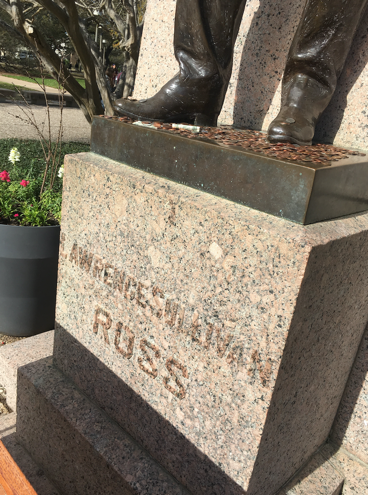 Lawrence Sullivan “Sul” Ross, or simply known as “Sully", was born on September 27, 1838 in Bentonsport Iowa Territory. A year later Sully and his family moved from Iowa to the frontier in Texas; they settled on a large piece of land which created a big change in their lives. When Sul was young he had many encounters with Indians and this created a goal of wanting to fight the Indians just like his father did. As just a young boy Sul was involved in his first Indian fight. Although he had a passion for fighting the Indians, he would go on to pursue other goals and found himself attending Baylor University in Waco, Texas.  This school was close to where his parents had settled years earlier; however, he did not complete his degree while there. Sul left Baylor University and attended Wesleyan University in Florence, Alabama.[1]

Before graduating from college, Sul returned back home where he joined alongside his father to fight the Comanche Indians alongside the “The Brazos Reservation Indians”. He became a leader in the small Indian militia. Being a leader and part of this group was something Sul saw himself doing for a very long time. Lawrence Sullivan lead his new group to the state of Oklahoma to attack the Comanche Indians. Although Sul was very confident in his approach it went downhill quickly. During the attack Sul found himself in a predicament where a Comanche Indians had the upper hand and was able to stab Sul and temporarily paralyze him. Luckily, Sully was saved by one of of his men who was able to kill the chief of the Comanche Indians. This ended the battle against the Comanche Indians. Sul was still in intense pain but was able to make a full recovery. [2]

Following the Indian attack, Lawrence went back to college and received his degree in 1859. In college Sully did not pursuit a specific degree, but rather decided to invest in a military career. He left Alabama and went back to Texas where he became a captain in the Texas Rangers. This high position brought power, strength, and the approval of Sam Houston. [3]  In 1861 Sully joined the Confederate Army, under the Sixth Texas Calvary. Sul fought in over 100 battles and became one of the youngest generals in the Confederacy.

After resigning from the military Ross moved his family back to Waco, Texas where he was elected Sherriff.  During this time in Waco, he helped write the Constitution of 1876. His involvement in the writing of the Constitution gave him experience in the political world. In 1887 Sul became the governor of Texas and severed two terms in office. He was very well liked by the public and could have continued on but he was satisfied with serving only two terms. A short time after leaving government Sully became president of Texas A&M University. “Sully was known for his legendary efforts to keep the college open; he is often credited as the embodiment of Aggie spirit and tradition.” [4] Sully played a huge role in helping students with academics around campus. Students would ask Sully for help with their homework and often asked how they could repay him. Sully would simply reply with “a penny for your thoughts”. As a token of gratitude, Texas A&M students, to this day, put pennies on the statue that was erected in his honor. All of the money and gifts that are left at his feet are collected and donated to charity. This allows his spirit to live on through the community by giving multiple organizations funds to operate in the Bryan and College Station area. Texas A&M also honored Sully when he died with a campus ceremony known as “Silver Taps”. This tradition occurs monthly and honors A&M students who have passed away while pursuing an undergraduate or graduate degree. Students gather at the academic plaza and hold a candle light ceremony for the students who have passed to recognize them while showing their families that there is an aggie family supporting them.

Although Sully is represented as a hero, his statue brings up controversy for many reasons. It is rumored that Lawrence Sullivan Ross was also a member of the Ku Klux Klan, which stirs discussion about the legitimacy of Sully’s legacy and statue. There have been heated debates and hearings about the topic. Although there is no hard evidence, it is said that his Ku Klux Klan robes are buried or stored on the Texas A&M campus. The Sully statue is also controversial because Lawrence was a Confederate soldier who fought to keep slavery. In today’s climate, many Confederate soldier’s statues around the country are called to be taken down which has caused debate on whether Sully should be left standing.[5] On the Texas A&M campus Lawrence Sullivan Ross is not known for what being a part of the Confederate military, but rather for his contribution of keeping Texas A&M alive and thriving.