Fully operational in 1978, the Burnsville Dam and Lake is named after the nearby town of Burnsville. It is one of several mountain lakes in West Virginia created by the U.S. Army Corps of Engineers. The dam is crucial to control flooding on the Little Kanawha River in Braxton County, and the lake serves a purpose beyond engineering for flood control purposes. As with many Corps projects, the lake is a prominent destination for camping, hiking, and boating/fishing. Additionally, the surrounding area has a rich history dating back to the 19th century and the Civil War, making the lake a great resource of economic and cultural importance to the community.

The Burnsville Dam's concrete spillway and tailwaters feeding into the Little Kanawha River. 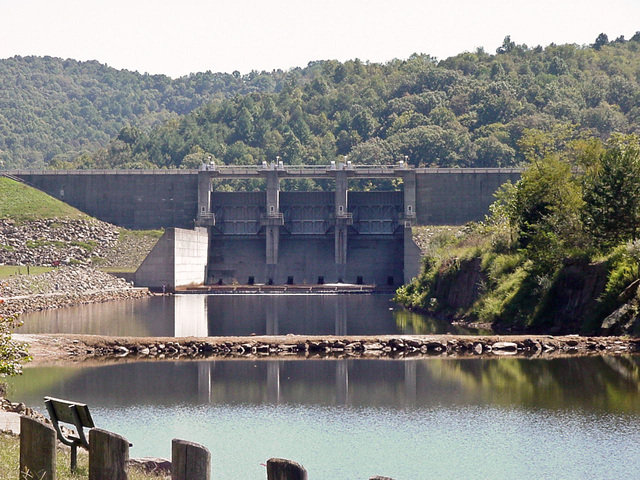 Aerial view of the Burnsville Dam and Lake. 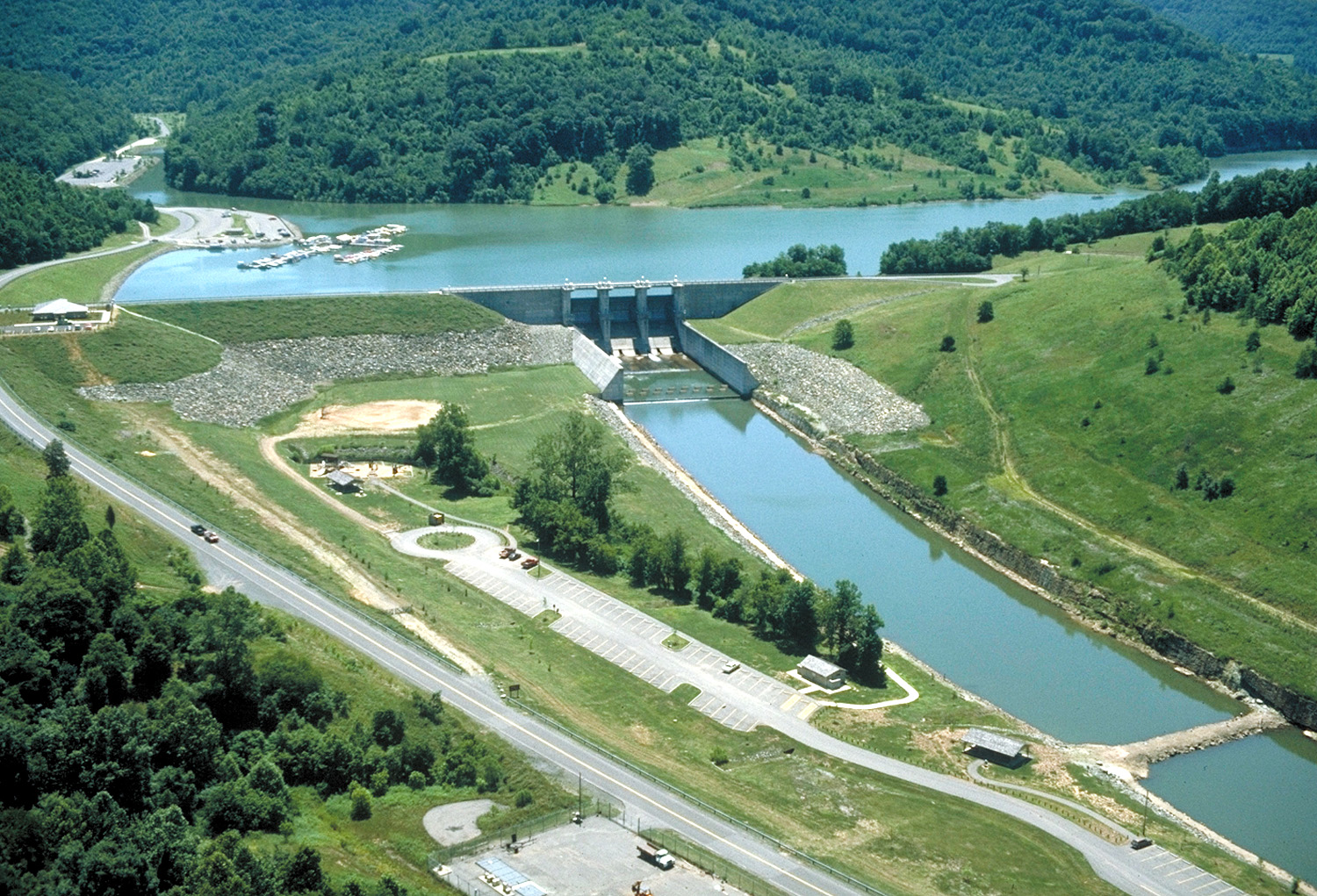 The dam spillway from lakeside.

Construction on the Burnsville Dam began in 1972 by the U.S. Army Corps of Engineers, and the project was complete with the dam fully functional by December of 1978. The dam is located only a short drive up the Little Kanawha River from the town of Burnsville near Interstate 79. Burnsville Dam is an earth-fill combined with a concrete structure that spans 1,400 feet and stands at 90 feet tall. Authorized under the Flood Control Act of 1938 the dam's primary purpose is to control flooding on the Little Kanawha River and serve as a recreational site. On any ordinary day, water flows through the dam’s gates, but following a significant storm that causes potential for flooding the gates are closed, and water is held in the lake until it is safe to release. The site for the dam, lake, and recreational areas includes over 13,224 acres of land, which provides a fantastic location for enjoying the mountain state.1

Many of the Army Corps of Engineer’s projects produce tax revenue for their supporting communities and local governments through tourism and recreation. However, during the work on the Burnsville Dam, several local officials in the Braxton County government called into question the actual revenue benefits from the dam's construction. In 1976, a Braxton County report stated that the promise of new industry and revenue had yet to occur and that the Burnsville Dam and nearby Sutton Dam on the Elk River cost the county $93,000 in lost tax revenue. Construction of the two dams resulted in the loss of over 18,000 acres in private property valued at 5.3 million and blocked access to natural resource development on the two sites. Braxton County Assessor Billy Jack said that: “Right now, coal is a hot item in this county, but quite a chunk of coal, oil, and gas have been locked up.”3

Despite the early concerns, the Burnsville dam is a prominent tourist attraction in Braxton County drawing three-quarters of a million people yearly. Boating and fishing are two of the lakes more prominent attractions along with camping. Anglers can target a wide variety of species at the lake like crappie, bluegill, walleye, small & largemouth bass, catfish, and even the elusive muskie. The recreational area supports two campgrounds both with boat ramps: Bulltown and Riffle Run. Along with camping, the area around the dam has a vast network of trails that spans roughly 88 miles. The trail network also includes the Weston & Gauley Bridge Turnpike Trail that connects to Stonewall Jackson Lake ten miles to the north. This trail features some fabulous scenery and is on the National Register of Historic Places since the turnpike offered a vital means of transit for troops during the nearby battle of Bulltown.

The attractions around Burnsville Lake are not just limited to the outdoors, at the lower end of the lake there the Bulltown Historic Area. Scenic trails surround the location and are woven around several buildings that date back to the 19th century. Near Bulltown is the site of a former grist mill at a section of small falls on the Little Kanawha River. Bulltown is also the location of a minor Civil War rkirmish that is reenacted biannually. The Battle of Bulltown occurred on October 13, 1863 and lasted for about 12 hours. Both sides suffered casualties during the engagement, and a local civilian named Moses Cunningham was clipped by a bullet when he came running from his house shouting: “Hurrah for Jefferson Davis.”4

Burnsville Dam is a vital engineering structure that has helped to protect West Virginia communities from flooding for almost four decades. Not only are the lake and dam necessary or flood control, but they contribute to the greater culture of the area by providing a fantastic recreational spot and opportunities to explore history at the nearby Bulltown Historic Area and a Civil War battlefield.