Fernland Historical Park and Museum is an educational park. It is located in the center of Montgomery, Texas, about 45 miles southeast of College Station. Its main goal is to educate the public about the history of Texas and life in the early days. The park was dedicated in 2012 and was acquired by the city of Montgomery in 2013. Most of the historical buildings on the park grounds were restored by Benjamin Carroll Tharp Jr. over a period of 20 years and were donated by Tharp and his wife, Mae Tharp, to Sam Houston State University in 1991. The log homes and cabins were built as early as the 1820’s and are among the oldest restored buildings in Texas.

This is a picture of one of the five main buildings on the site. 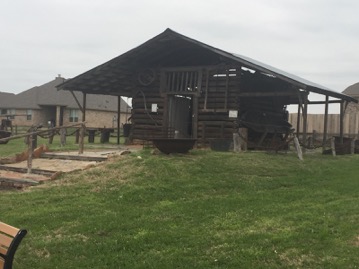 This is a model of early Montgomery, Texas. 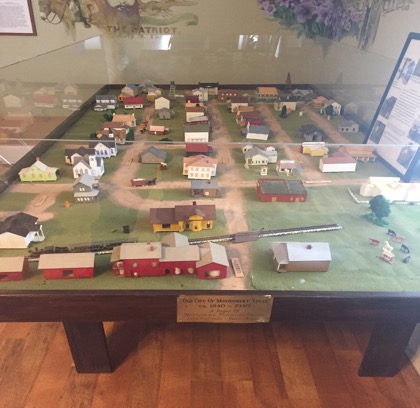 The park was started in 2002 on 40 acres of land donated to Sam Houston State University. Benjamin Carroll Tharp Jr. was a well-known architect. After retiring from his job designing buildings, he continued working as a restorative architect.[1] He and his wife purchased the first of the five restored buildings from Montgomery and Walker counties in 1974. Tharp completely dismantled the buildings and then restored and reassembled them to their original condition over a period of 20 years. The buildings were originally donated to Sam Houston State University in 1991 and then moved to Fernland Historical Park in 2011.[2]

The park is made up of five primary buildings that are connected by paths and outdoor artifacts to describe life in early Texas. Probably, the most recognized building is Bear Bend, which was the hunting cabin of Sam Houston, the first president of the Republic of Texas. It is a two-story log building that was restored by Tharp and moved from where it was originally built near Lake Conroe. The other buildings are known as the Hulon house, the Jardine cabin, the Crane cabin, and the Arnold-Simonton house. Most of the buildings have an interesting history. The Jardine cabin was originally owned by Irish immigrants and the Crane cabin was built by Vincent Crane, a civil war veteran. Both the Jardine and the Crane cabins were completely restored and are filled with antique furniture and artifacts from the 19th century. The Arnold-Simonton house is the oldest house in Montgomery, having been dated back to the early 1800’s. In 2011 the building was moved to the Fernland Historical Park and is still in the process of being refurbished. Not much is known about the Hulon house. It was originally built somewhere in Walker or Montgomery County and was also one of the buildings that was dismantled and restored by Benjamin Carroll Tharp Jr. between 1974 and 1991.[3]

In 1991, Mr. and Mrs. Tharp donated the buildings to Sam Houston State University.[4] However, because they were in such a remote location, a decision was made to move them to a location that would allow more people to come and see them. The 40-acre parcel of land in central Montgomery that had been donated to Sam Houston University turned out to be the perfect location to put them. A joint decision between the city and university was made to move the buildings to permit more access, and in 2002 the Fernland Historical Park was created. In 2013, the city of Montgomery, Texas, took over management of the park.