The National Cambodian Heritage Museum & Killing Fields Memorial is dedicated to preserving the history and culture of Cambodia and connecting the Cambodian American community together. Much of the museum is focused on the Cambodian Genocide, during which over two million people died under the Khmer Rouge regime from 1975 to 1979. It is one of only two Cambodian museums in the United States and is home to the Killing Fields Memorial, the first permanent monument to the victims of the Cambodian Genocide. The museum is also home to the Cambodian Association of Illinois, which provides support services to the state’s Cambodian American community and offers a variety of cultural and language classes. It is a member of the Chicago Cultural Alliance.

The National Cambodian Heritage Museum & Killing Fields Memorial opened to the public in 2004. Image obtained from On the Grid. 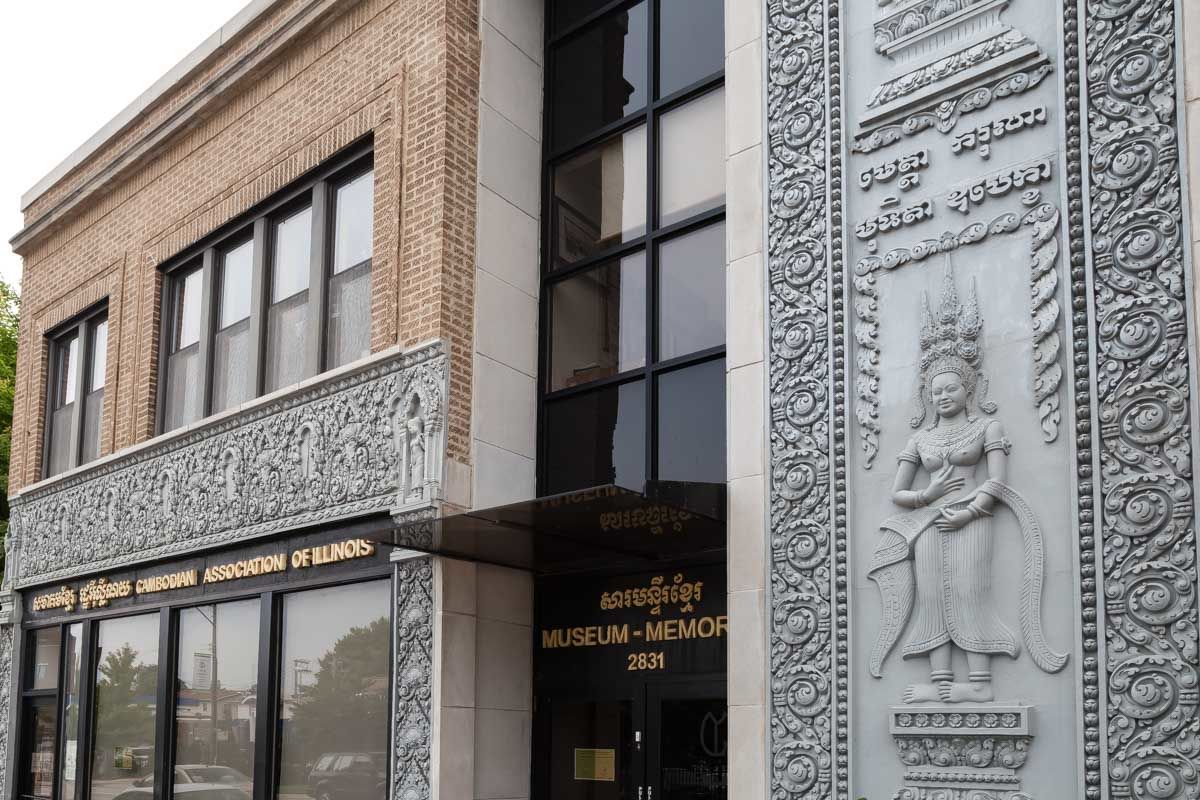 The museum's permanent exhibit, "Remembering the Killing Fields," teaches about the horrific Cambodian Genocide of 1975-1979. Image obtained from On the Grid. 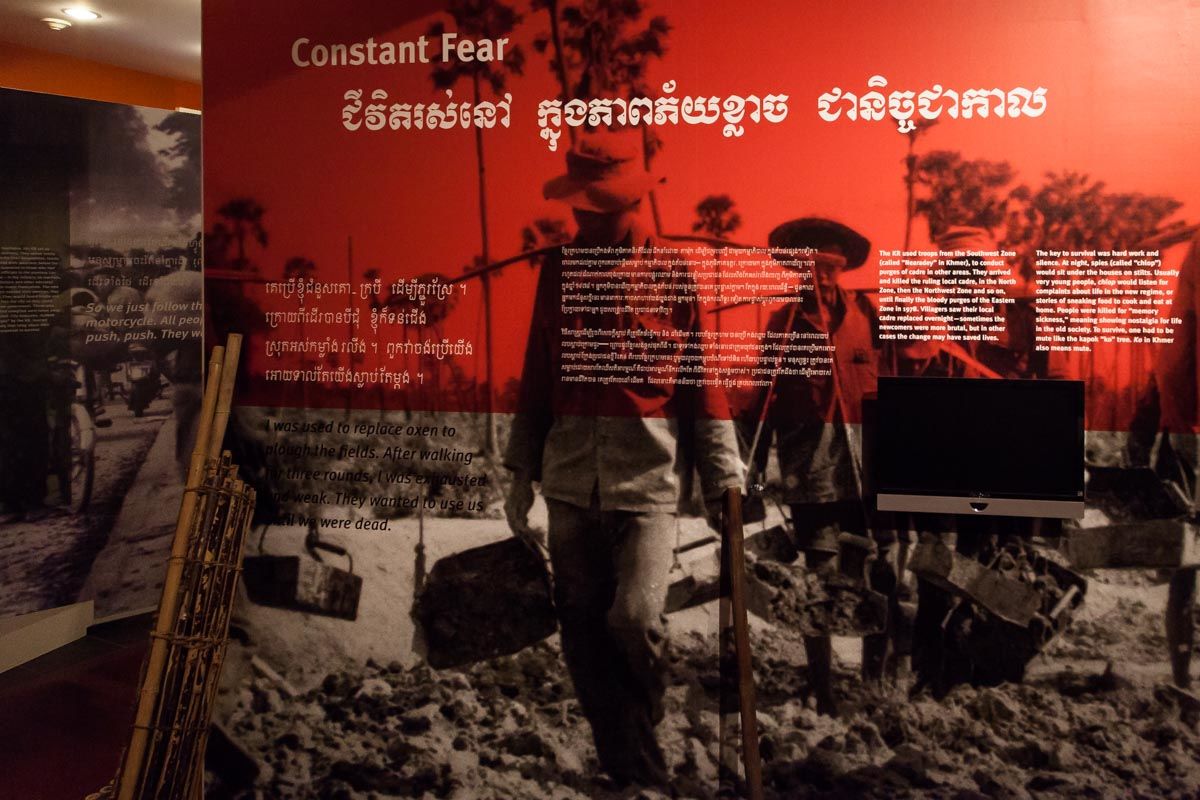 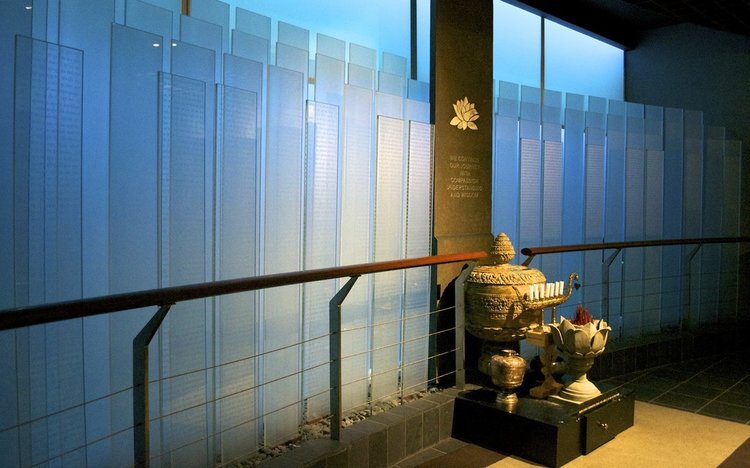 The number of Cambodians immigrating to the United States was negligible until 1975. That year the Communist Party of Kampuchea, commonly known as the Khmer Rouge, seized control of the Southeast Asian country after a bloody civil war. Over the next several years the Khmer Rouge attempted to transform Cambodia into a classless agrarian society and launched a brutal campaign of genocide to crush any dissent. Intellectuals and the well-educated in particular were targeted; city residents were forced into labor camps; doctors, teachers, scientists, activists, artists, monks, the wealthy, and people from minority groups faced execution. Many were gunned down en masse and buried in open spaces that were soon dubbed “killing fields.” More than two million people were killed over a four-year span. In 1979 Vietnam invaded Cambodia and removed the Khmer Rouge regime.

Hundreds of thousands of Cambodians immigrated to the United States during and immediately after the Khmer Rouge regime. Most settled in Massachusetts and California, but several thousand came to Chicago, where they concentrated in the Uptown and Albany Park neighborhoods. Today it is estimated around 3,000 or more Cambodians and their descendants live in the city. In 1976 the Cambodian Association of Illinois was formed; originally a chapter of the Cambodian Association of America, it separated to become an independent entity in 1983. The society’s original mission was to provide support services to help Cambodian immigrants adjust to life in America. It provided aid, offered English lessons, and taught Cambodians how to do tasks such as rent apartments and go grocery shopping. Today the association’s goals have shifted more towards keeping the Cambodian American community connected; preserving its culture; and remembering the Cambodian Genocide.

In 1998 the Cambodian Association of Illinois purchased a building on Lawrence Avenue with the intent of opening a museum and memorial. Over a million dollars in funding was raised for construction and renovations. The Cambodian American Heritage Museum and Killing Fields Memorial opened to the public in 2004. In 2015 the museum was incorporated as an independent entity (while still a part of the CAI) and changed its name to the National Cambodian Heritage Museum & Killing Fields Memorial. The museum currently contains one permanent exhibit, “Remembering the Killing Fields,” which tells the story of the Cambodian Genocide with images and artifacts from the event. Another section of the building houses the Killing Fields Memorial, the first permanent monument to the victims of the Cambodian Genocide. It includes a Wall of Remembrance, where a growing list of victims is etched onto a series of glass panels. The museum still serves as the headquarters of the Cambodian Association of Illinois, which operates a gift shop and a research library containing various resources on Cambodia, Cambodian Americans, Buddhism, and the Khmer language. The museum and CAI also operate a cultural arts program that offers traditional dance, music, and language lessons.