The Douglas County Courthouse has been one of Omaha’s most significant locations since its construction in 1909. The building was constructed in the French Renaissance Revival style with a granite foundation and walls of Bedford limestone. An abundance of classical details are noticeable on the building’s symmetrical exterior including an arcaded front entrance, engaged Corinthian columnns and piers on the upper floors, and ornamental pediments in the projecting wings flanking the primary entry. The top story, which originally housed a jail facility, is of a simpler design than the floors below.[1] The courthouse was the centerpiece in Omaha’s expansion and development into a modern city.[2] 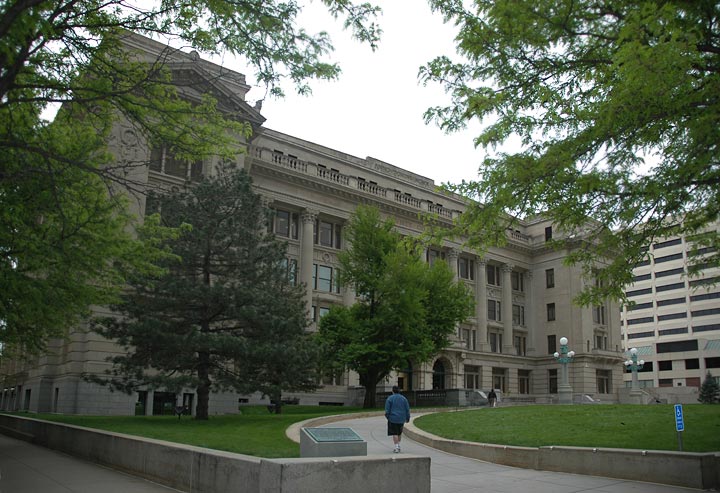 The building was designed by famed Omaha architect John Latenser, Sr. Latenser was responsible for the designs of some of Omaha’s and Lincoln’s most prominent buildings such as Central High School, J. L. Brandeis and Sons Store, and perhaps most importantly to some, Memorial Stadium.

Eight murals hang upon the dome of the courthouse, each one commemorates moments from the history of Omaha; from its Native American past to its modern growth as a city. The murals were originally painted by an artist named Will Rau, who worked for a New York decorating firm. They were installed, along with everything else in the brand-new courthouse, in 1912. And almost right away, they sparked controversy. County commissioners ordered the installation stopped after the decorating firm shared images of the murals with the press before the commissioners had a chance to see them. The murals have undergone immense amounts of restoration work, needing to be repainted more than once due to being heavily damaged during an infamous fire.[3]

The courthouse was the site of one of the darkest events in the city’s history, the lynching of Will Brown and the race riot of 1919. In September of 1919 a mob of angry white citizens gathered at the courthouse demanding police to hand over Will Brown, an inmate accused (never convicted) of raping a white woman. When they were denied, the mob stormed the courthouse, set fire to the roof, and seized Brown who was promptly lynched. The mayor Ed Smith, who tried to stop the mob, was hanged as well but was cut down at the last minute.[4]

The courthouse’s civil rights history isn’t all negative though. In February of 1948 Father John Markoe led members of the DePorres Club in staging Omaha’s first sit-in, at a restaurant inside the courthouse. When asked what their purpose was Markoe said the group’s goal was simple, “to kick Jim Crow’s ass out of Omaha.”[5] The success of the sit in was the start of many early civil rights protests in the Omaha metro led by the Deporres club.[6]

The courthouse has remained the site of all the city’s major legal proceedings. On October 11, 1979 the Douglas County Courthouse was listed among the National Register of Historic Places.

[3]Blake Ursch, Douglas County Courthouse Murals Have a Colorful Past, and Restoration Gives Them a Bright Future, Omaha.com. Accessed 3-5-2018.