Established in 1968, North Cascades National Park covers an area of more than 500,000 acres featuring numerous mountains and a wide range of ecosystems from temperate rainforests to dry ponderosa pine forests. As its name indicates, it is part of the North Cascades Range, which extends from southern British Columbia to northern California. It is adjacent to national forests and wilderness areas and is rich in biodiversity. So far, 1600 species of plants have been identified and efforts to identify plants and animals are ongoing. There are several visitor centers. The one on the map is the North Cascades Visitor Center, which is only open from May to October and next to the Highway 20 which traverses the park. It features multimedia exhibits about the natural and cultural history of the park and surrounding region, a theater, and interpretive hiking trails. Hiking, backpacking, camping, and biking are some of the activities visitors can do at the park. Information about these and other activities can be found at that visitor centers. It is important to note that most of the park is pristine wilderness, so it is not possible to drive to a campground; visitors must hike in to camp.

Ross Lake is one of many lakes in the park. 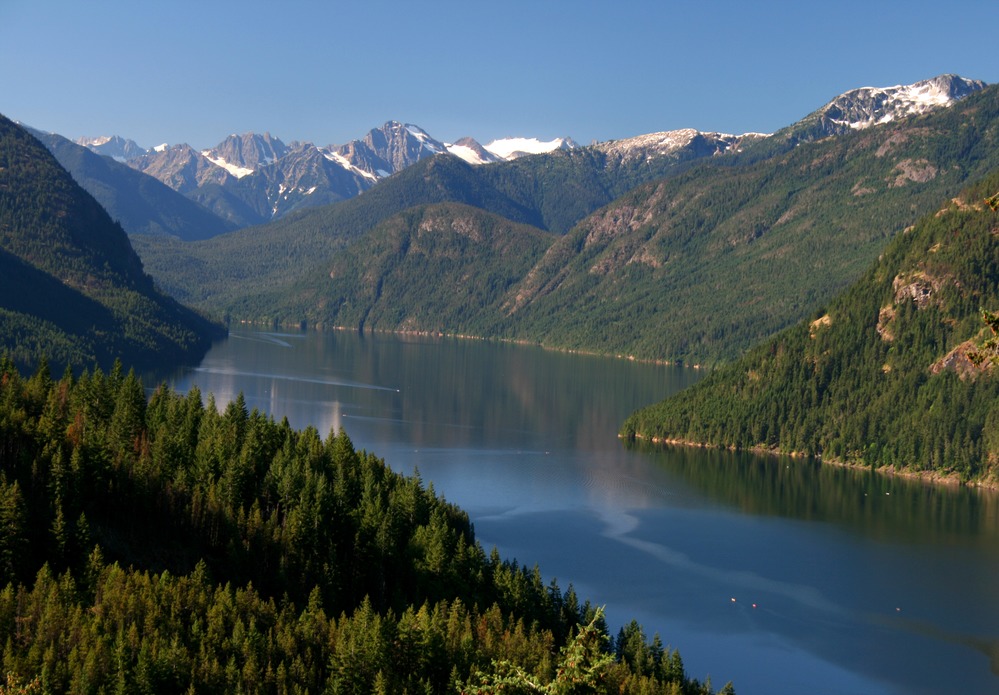 Mountaineering is a popular activity in the park. This climber is descending Sahale Peak. 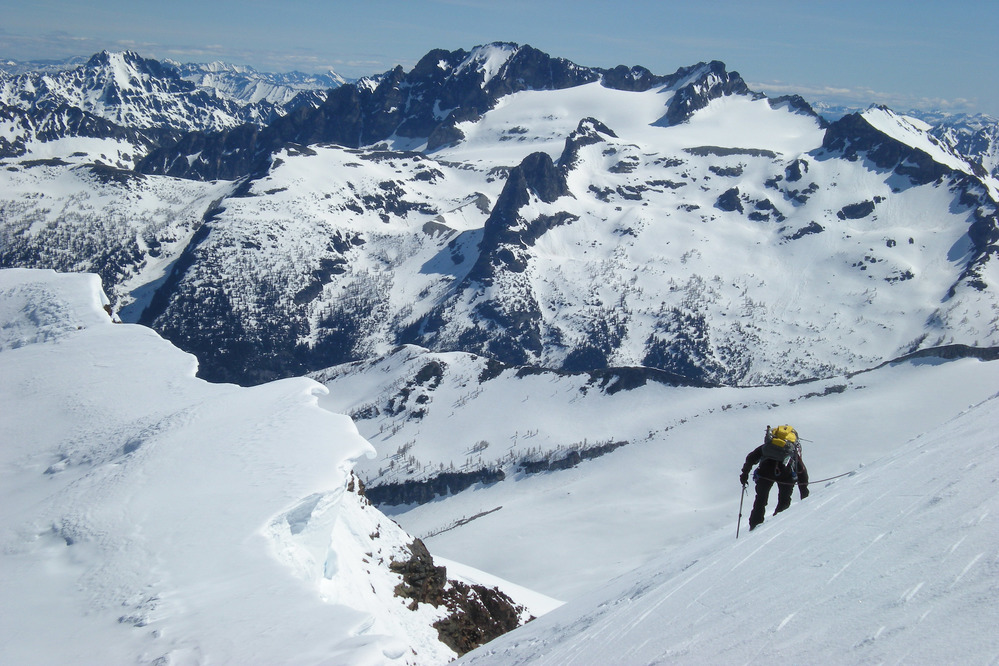 A camper takes in the view near Easy Pass 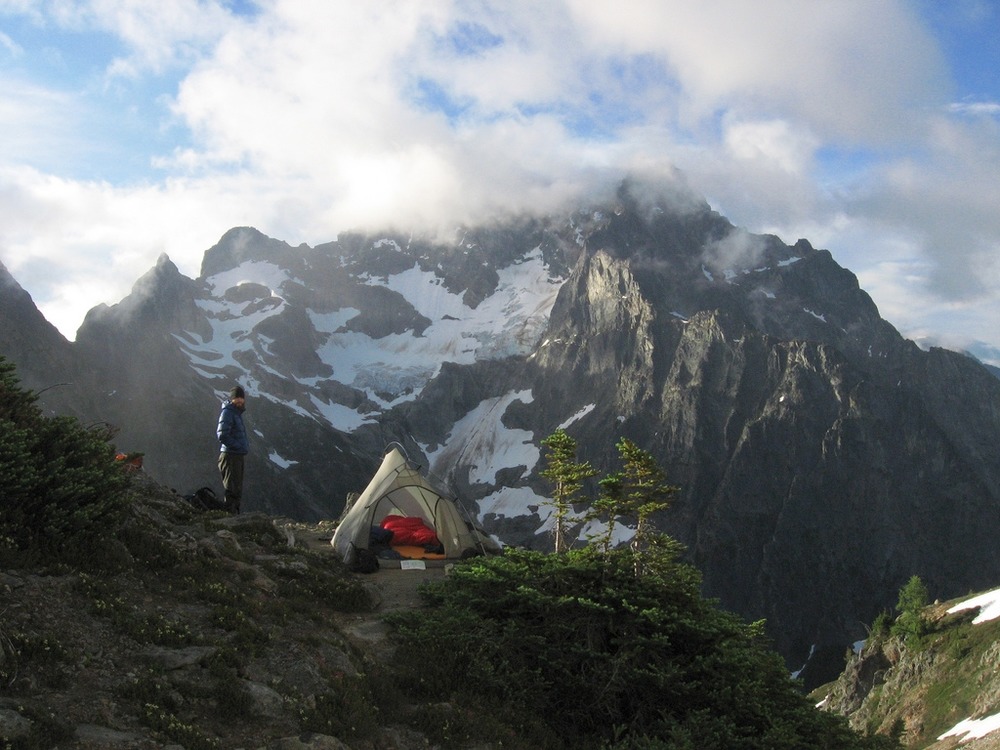 A park ranger looks through his binoculars from Sourdough Lookout. 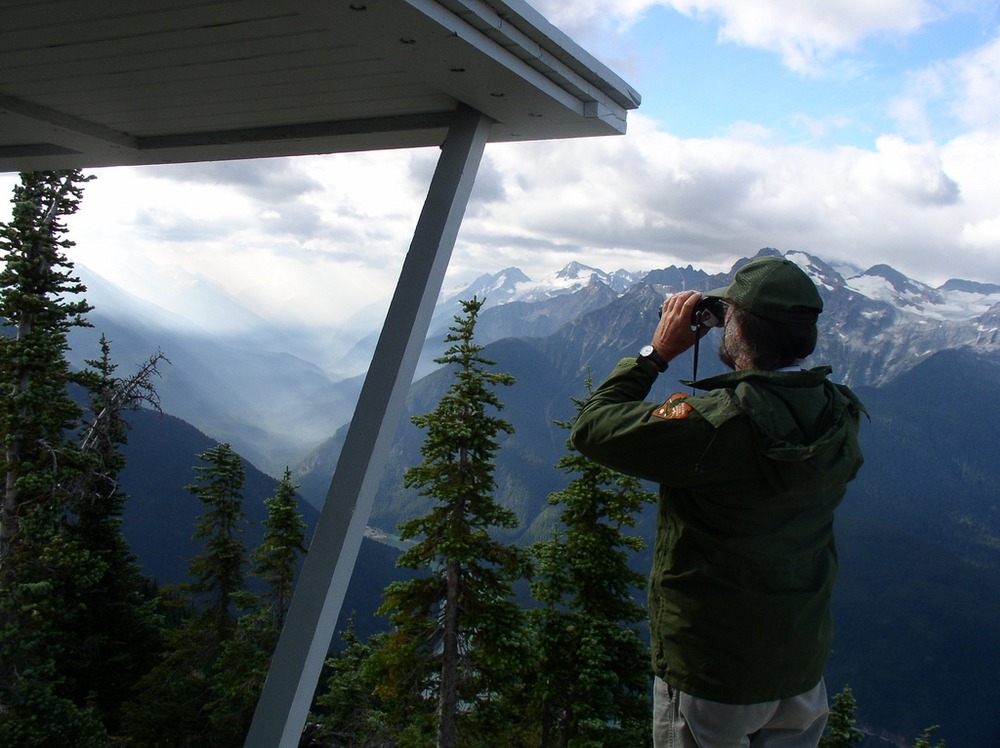 Signs of the first human presence in the park dates back 9,600 years ago. Thus far, archaeologists have found 260 prehistoric sites, the oldest of which dates back 8,500 years. Prehistoric native peoples were attracted to the natural resources of the subalpine forests, which included obsidian and other types of rock. Over time, they developed regular travel routes throughout the park in all directions as evidenced, for example, by the discovery of stone tools made of rock from as far as 50 miles to the east and 20 miles to the south. The peoples were the ancestors of the modern tribes (the Wenatchi, Skagits, Chelan, Nlaka'pamux, and the Okanogan).

European explorers and fur trappers first arrived in the area in the 1700s. Fur trading continued into the 1800s, but others made attempts at mining and logging. Gold was found in the 1850s, which started a gold rush that lasted into the 1870s. The rush came when silver was discovered in 1892. Mining proved to be very difficult and expensive. The rugged terrain made it costly but mining did continue until the 1950s (WWI and II helped spurr mining efforts). Logging began in the 1860s but it had the same problems. As a result, little of the park has been logged, which is one reason why there are hardly any roads in the park. That said, three large dams were built in the 20th century. The landscape made farming virtually impossible so other settlers tried their hand at business, becoming innkeepers and shopkeepers for the miners and loggers.

May-October: 9-6pm. The Center is closed during the winter.