The Cavern Club first opened its doors at 10 Mathew St, in Liverpool UK on January 16, 1957, in the cellar of a fruit warehouse. During World War II the space had been used as an air raid shelter.[1] The club originally began as a jazz and blues club. Within two years rock music emerged on the scene and rock entertainers began to perform at the Cavern Club. The club welcomed new and experimental groups. The Beatles became regular performers at the club early in their careers during the early 1960s.[2] Today, the Cavern Club continues to rely on its legacy as the place where the Beatles were discovered, and where British Rock and Roll exploded. The Cavern Club is where it all started.

Outside the Cavern Club 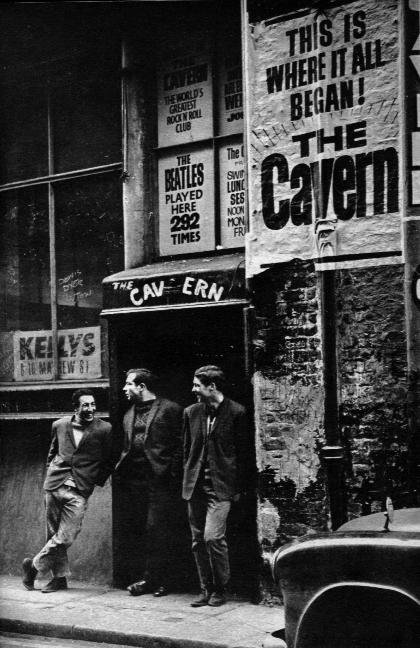 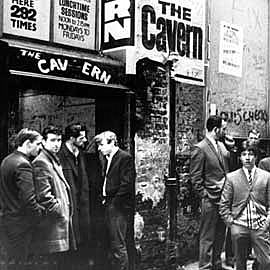 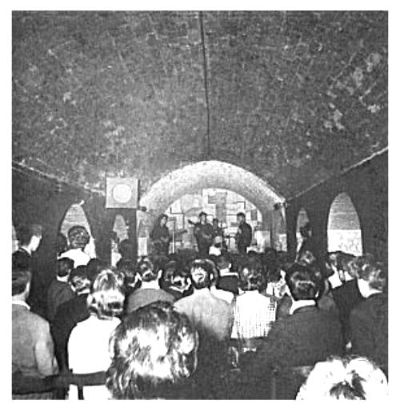 A newspaper clipping from The Mersey Beat, a music publication in Liverpool, England in the early 1960s 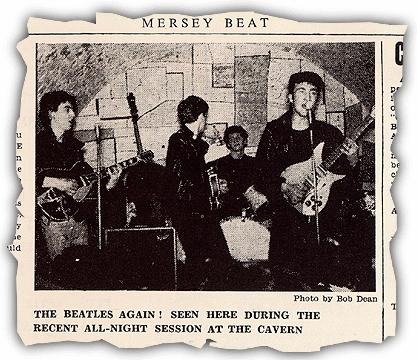 Liverpool in the late 1950s 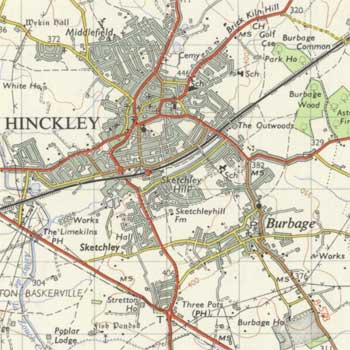 Outside the Cavern Club

A newspaper clipping from The Mersey Beat, a music publication in Liverpool, England in the early 1960s

Liverpool in the late 1950s

When the Cavern Club opened its doors, owner Alan Sytner dreamt of it being the premier jazz club in  England. Sytner converted the unused tunnels into a replica of Le Caveau Club in Paris.[3] However, it became known for many more musical genres than just jazz. The Merseysippi Jazz Band headlined that first night, January 16, 1957, along with the Wall City Jazzmen, the Ralph Watmough Jazz Band and the Coney Island Skiffle Group.[4] They played to an audience of 600.[5] Just two months later, March 13, 1957, the blues found its way into the Club when Big Bill Broonzy took the stage as part of his European tour. Later on that summer, folk music with a rock-n-roll twist known as skiffle, was played by the Eddie Clayton Skiffle Group.[6] This is largely believed to be Ringo Starr’s first performance at the Club. Paul McCartney’s first performance at the venue is believed to have been on January 24, 1958 with another skiffle group, The Quarrymen.[7]

The Cavern Club came under new ownership during the 1960s. Its new owner, Ray McFall, took the Club in a different direction. He started the decade with the Club’s first jazz festival but soon beat music became the dominant genre. 1960 ended with the addition of Bob Wooler as Club DJ. Wooler became synonymous with the beat scene in London that decade.[8] The Beatles made their first Cavern Club performance as a group on February 9, 1961.[9] At the time the five Beatles members included, John Lennon, Paul McCartney, George Harrison, Stuart Sutcliffe, and Pete Best. Later that year on November 9, Brian Epstein first heard the Beatles when he walked into the club over his lunch break. Soon after he signed as the group’s manager.[10] Ringo Starr joined the group for his first Cavern Club performance on August 19, 1962. Just a year later the Beatles made their last Cavern Club performance, on August 3, 1963.[11] They had become too much of a sensation for the little Liverpool club. After years of financial problems, the Club declared bankruptcy and closed its doors in February 1966. The doors did not stay closed long as the Club reopened on July 23, 1966, under new ownership again.[12]

In 1972 British Railways purchased the warehouse block that housed the Cavern Club. The company planned to demolish the block to make way for a subway ventilation shaft.  The building above the Club was razed in June, 1973. The cellar that once held the Cavern Club was filled in with rubble and a vehicle lot was created over the top.[13]

After much scrutiny, plans to excavate the buried Club were scrapped in June 1982. Architects determined that the cellar’s arches had been too badly damaged during demolition.  Instead countless bricks from the Club’s walls were sold to memento seekers. However, investors took matters into their own hands and over 15,000 of the original bricks were kept and used in a total reconstruction the very next year.[14] An authentic reconstruction on the original site opened in April 1984. The Club’s owners lost their operating license in 1989, so the Cavern Club closed its doors once again.[15]

The Club reopened yet again in July 1991.[16] The doors have remained open ever since. Many of the early Club performers, like Paul McCartney and Ringo Starr, have returned to perform at the Club. Other big names like Bo Diddley, Adele, Micky Dolenz, and the Arctic Monkeys have also played the Cavern Club.[17] The Club receives hundreds of requests every month from performers wanting to play the hallowed stages.[18]

The Cavern Club is one of the most famous music venues in the world. Music greats, like the Beatles, got their start at the Club early on. The doors have closed several times over the years but never stay closed for long. The original structure was filled with debris and damaged so badly it had to be completely rebuilt. Yet the legend lives on today through a totally rebuilt structure that is identical to its original. Audiences can enjoy the music much as they did over 50 years ago.

"The Beatles At The Cavern Club." Accessed February 27, 2018. http://www.formacionretail.com/mod/scorm/the-beatles-at-the-cavern-club.

Last updated by Casey Schroeder (Instructed by Sharon Wood, University of Nebraska at Omaha) on May 8th 2018, 4:13:48 pm.