Photograph of the Weccacoe Playground proper, which is located to the northeast of the actual burial ground 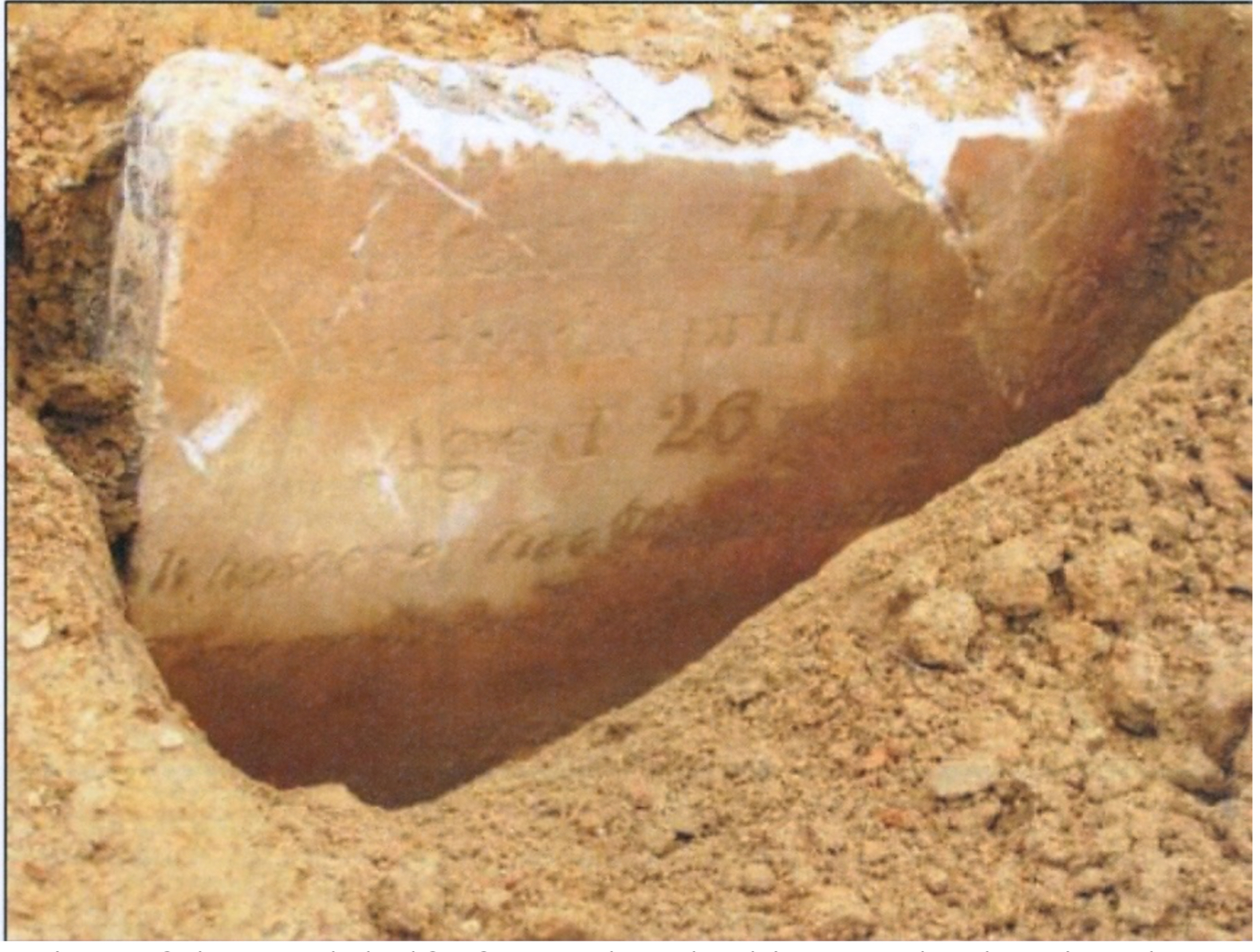 Photograph of the unearthing of Amelia Brown's headstone in 2013 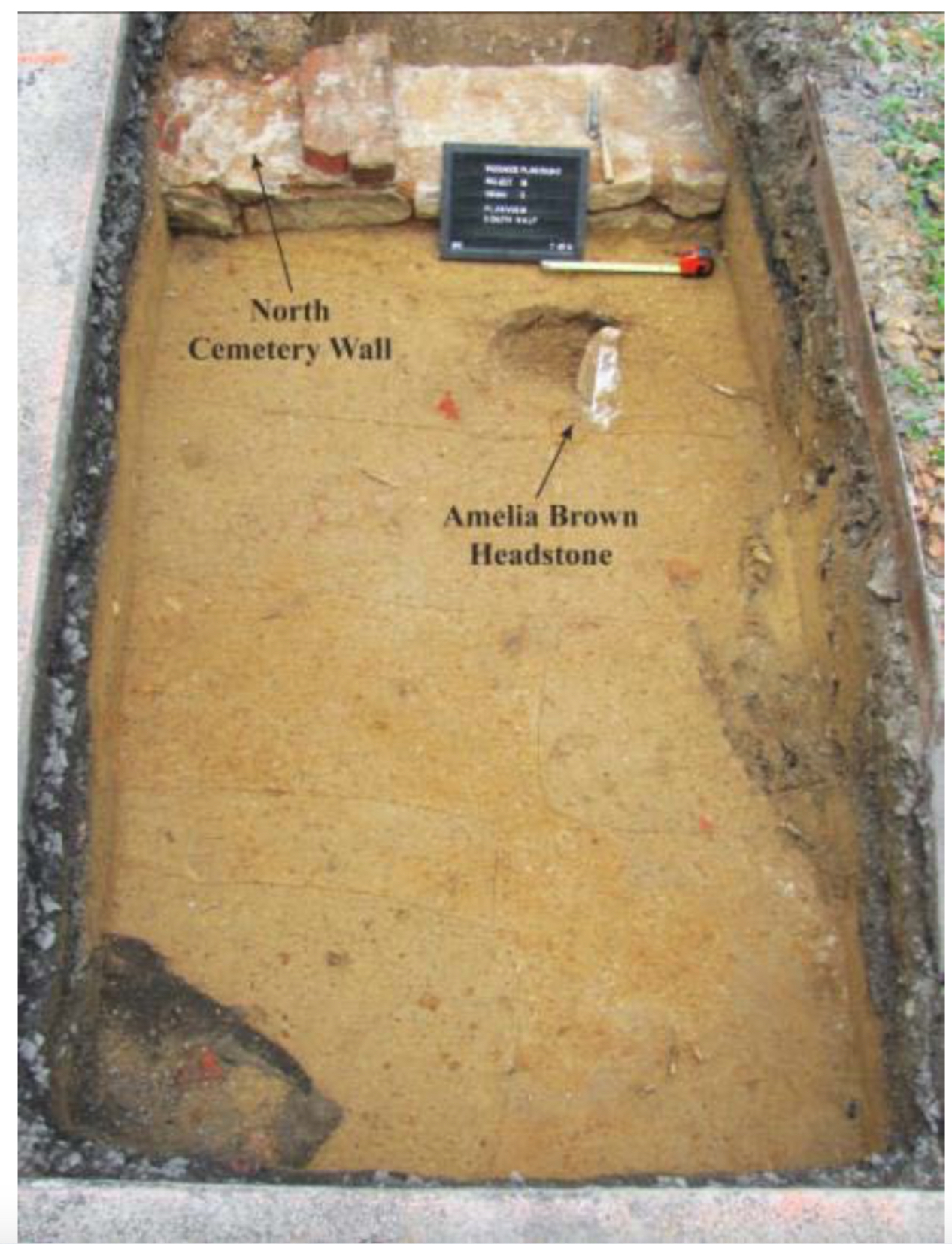 Photograph of the Weccacoe Playground proper, which is located to the northeast of the actual burial ground

Photograph of the unearthing of Amelia Brown's headstone in 2013

Photograph of the iron perimeter fence, constructed in the 1920s, and the recreational building, built in the 1970s. 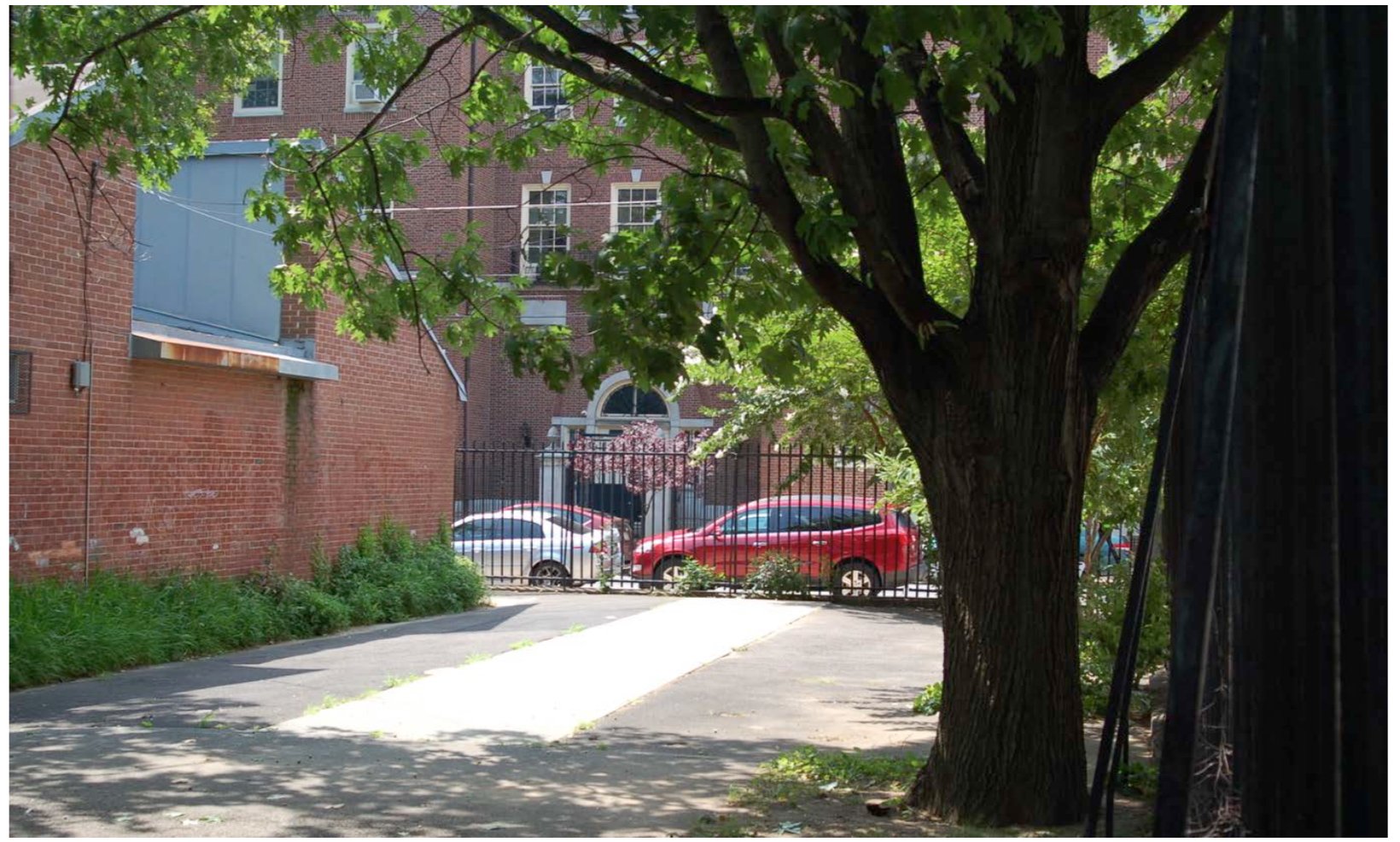 Photo of the northwestern side of the recreational building 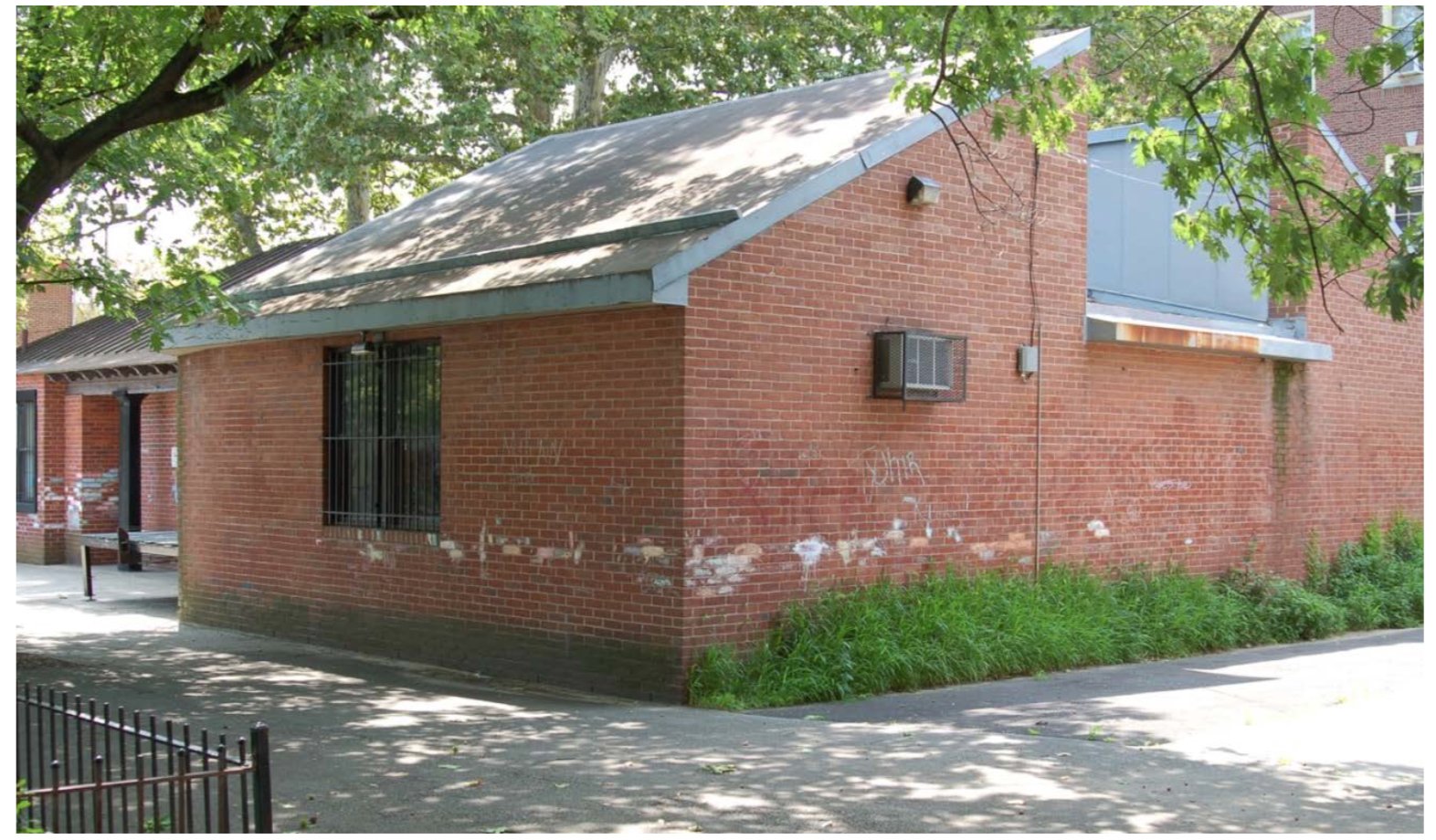 Aerial photograph of the 2013 dig 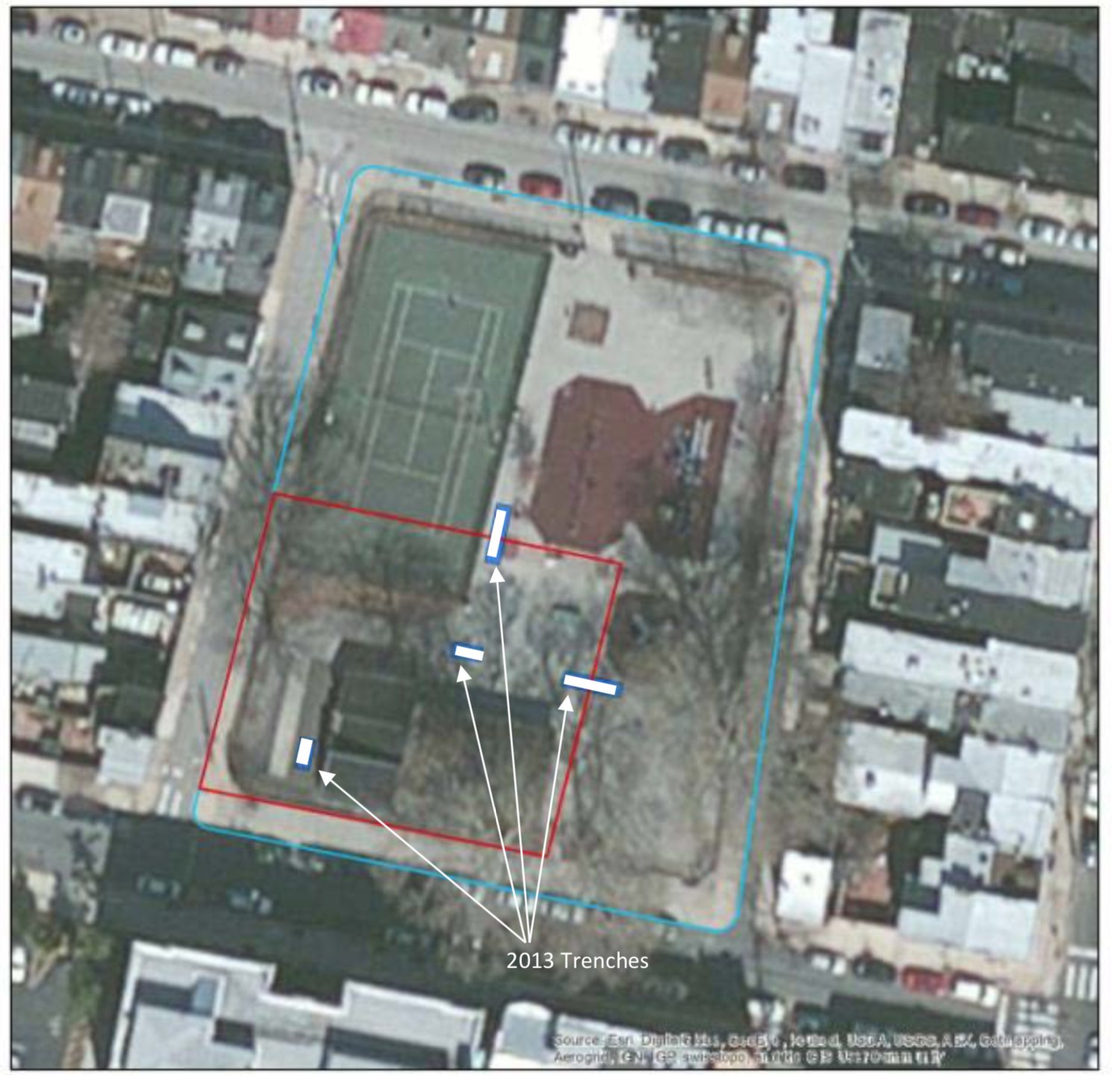 Full photograph of the recreational building, which was built over the burial ground 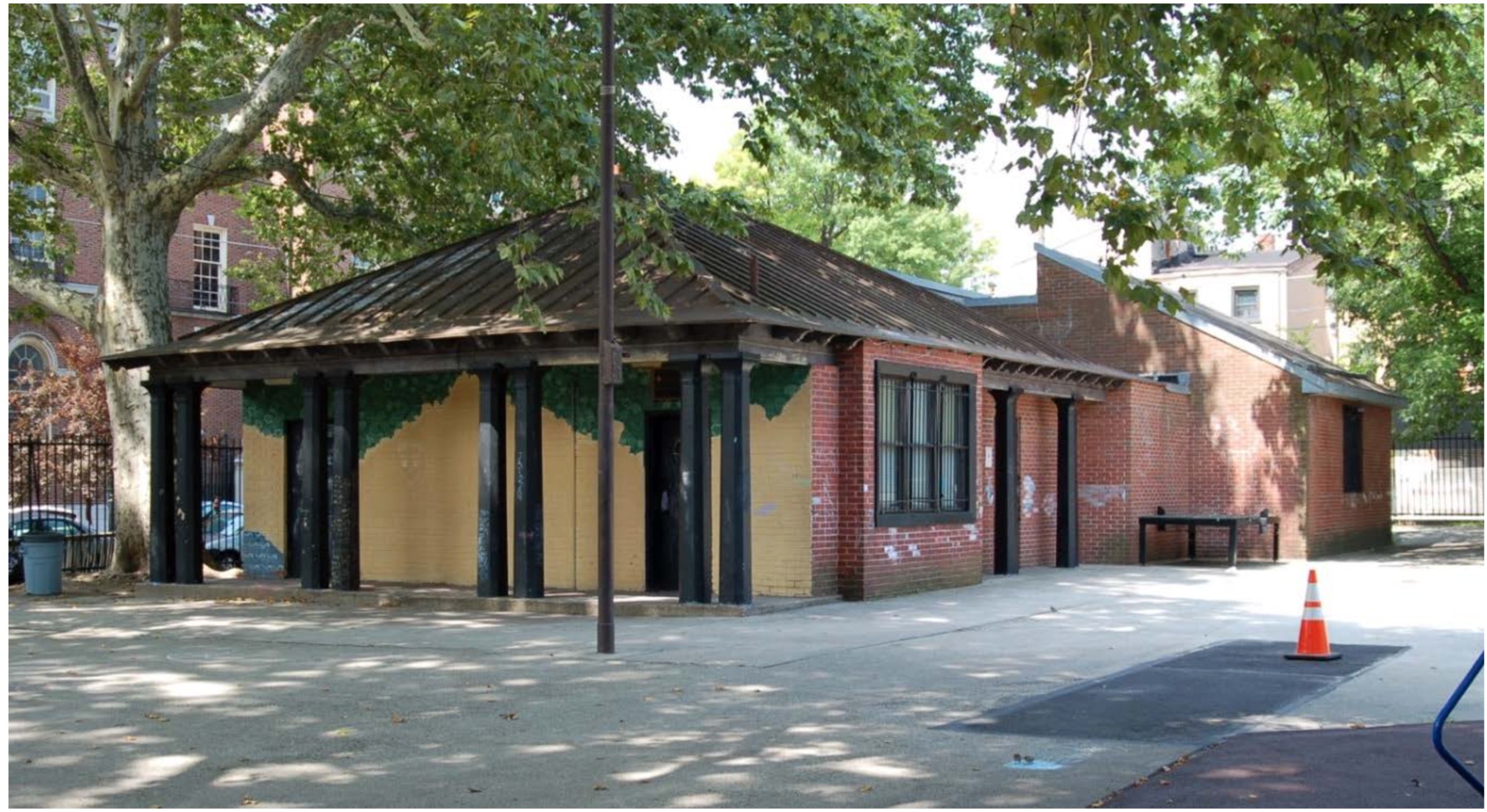 Closeup photograph of the iron fence, constructed circa 1924 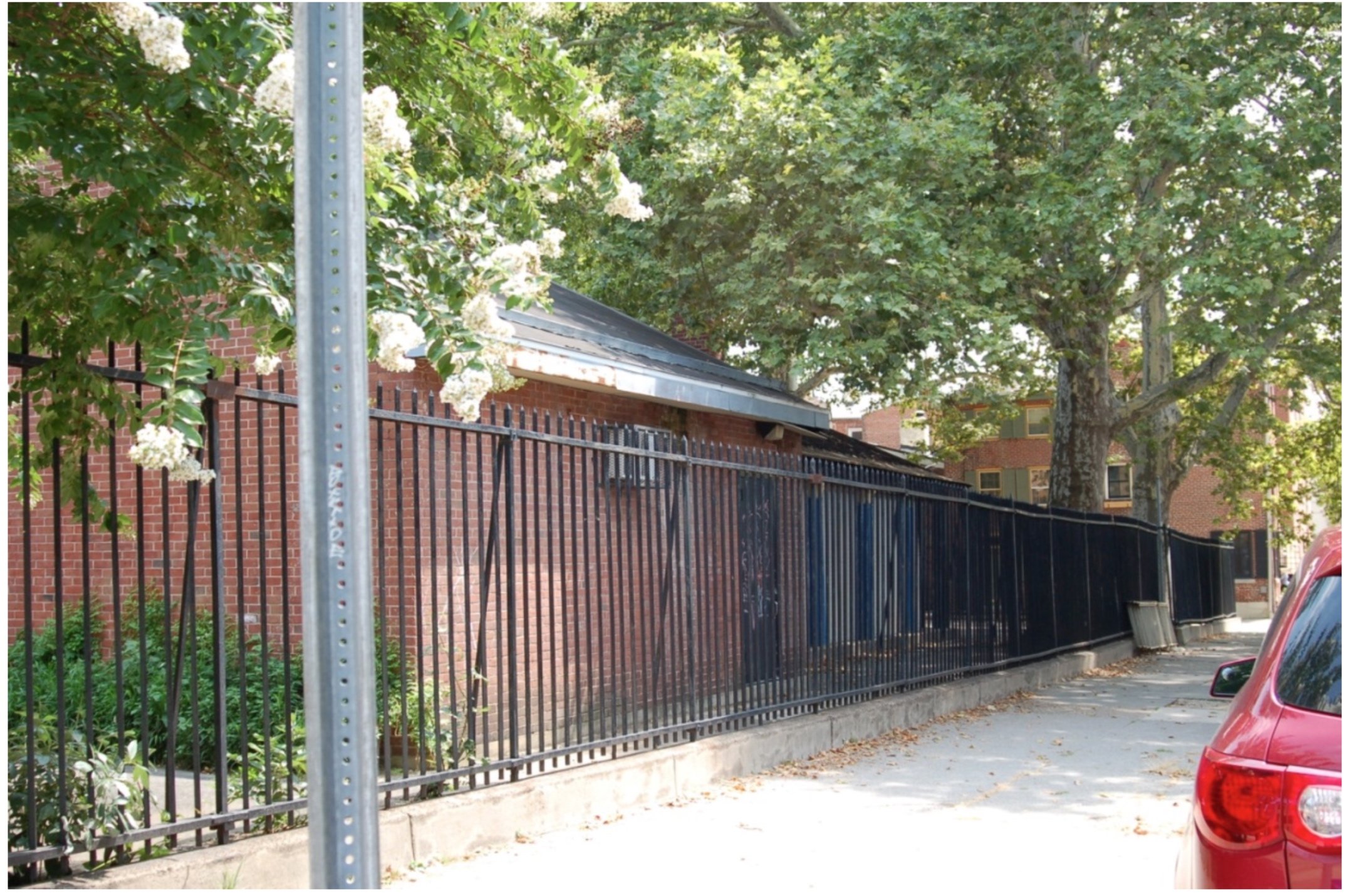 Photograph of a crowd that gathered during the 2013 investigative dig 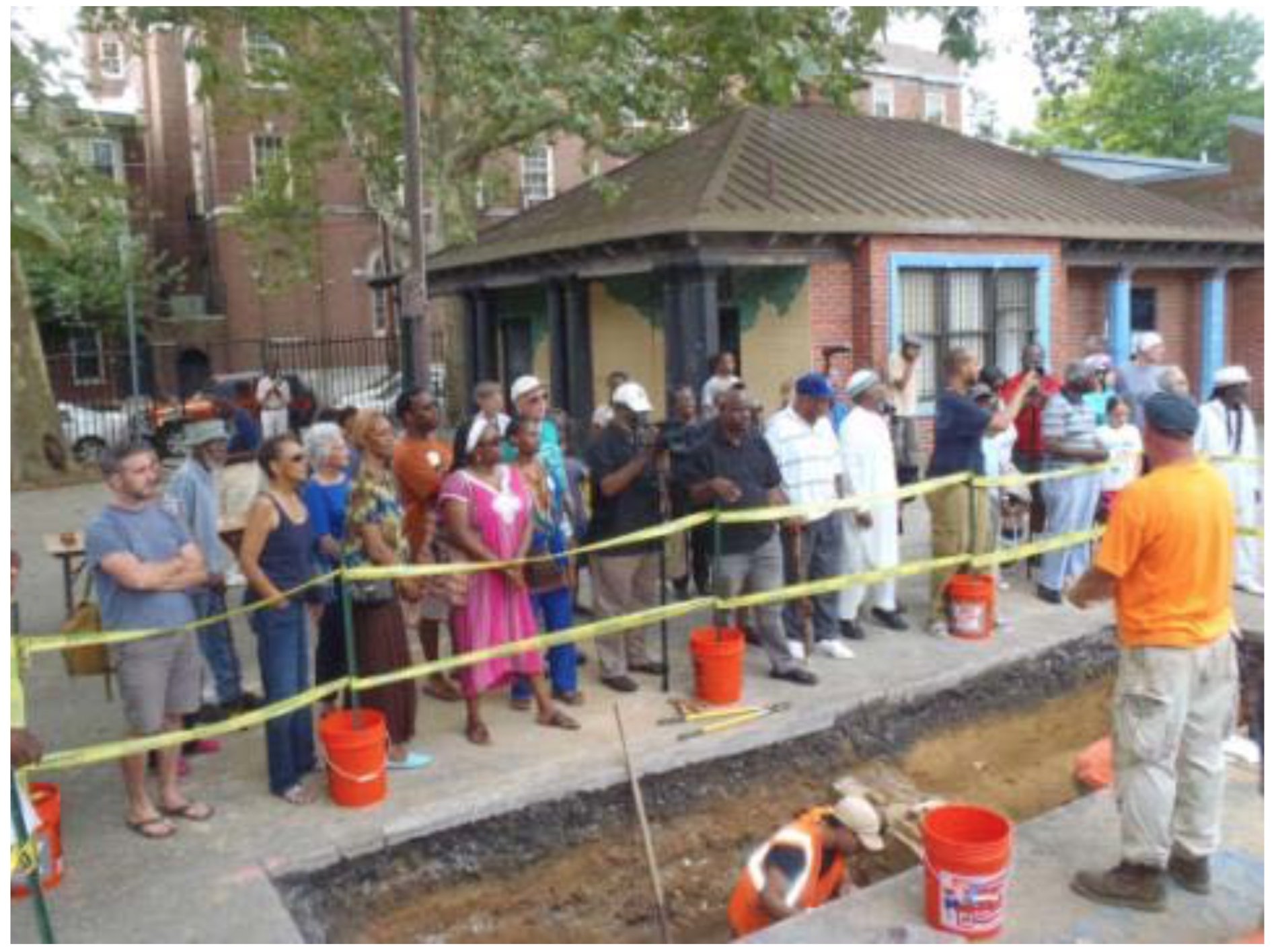 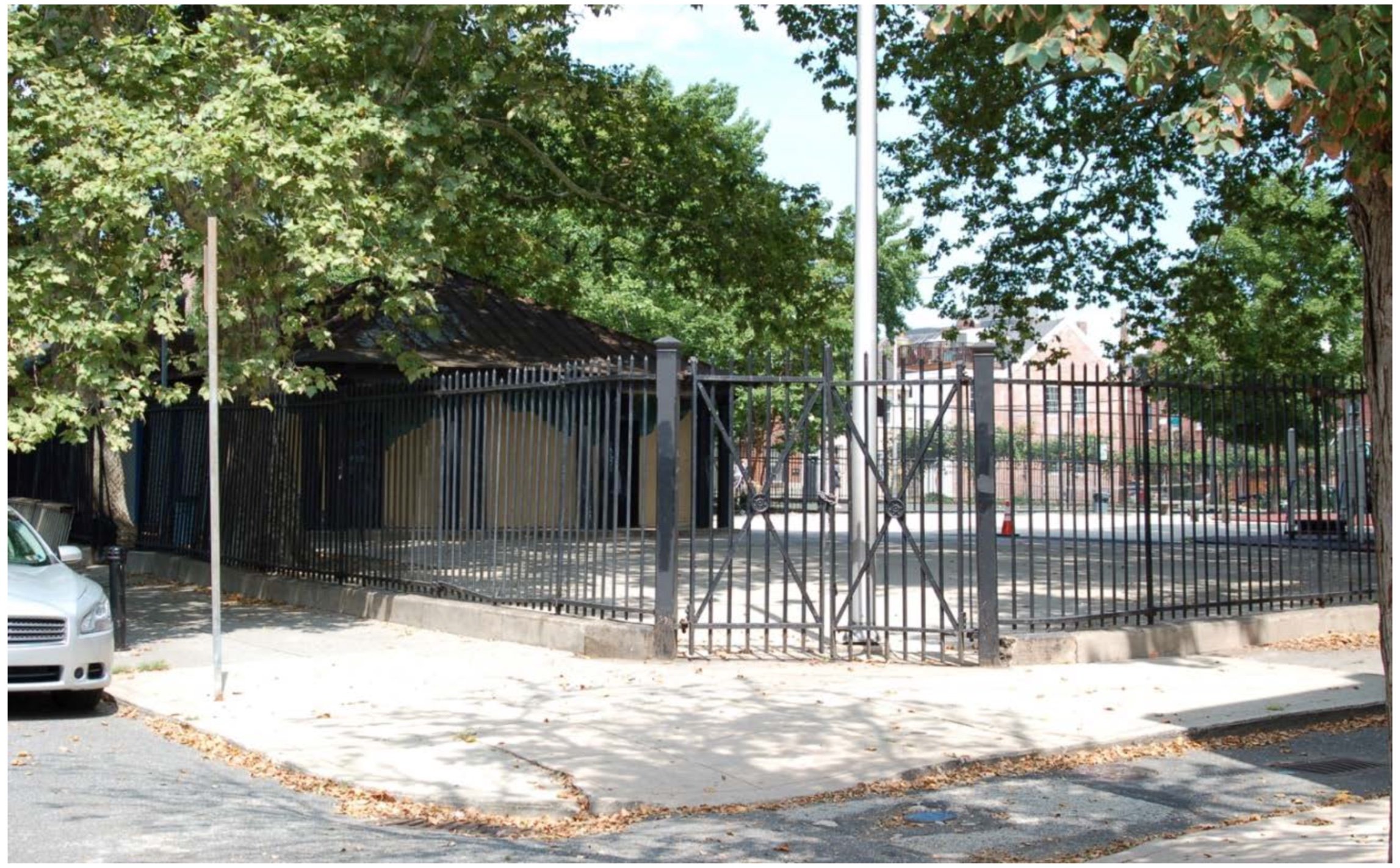 The Bethel Burial Ground began formal operation in 1810, overseen by the Bethel African Methodist Episcopal Church (also known as Bethel A.M.E., The Bethel Church, and Mother Bethel A.M.E.)  In the early history of Philadelphia (and indeed much of the United States,) African-American burial rights were restricted to public lots and almshouse burial yards which were generally modestly adorned and poorly funded.  Many burial grounds designated for use by African-American families in the Philadelphia area, including the Bethel Burial Ground, fell into disrepair not because of a lack of care or reverence but, instead, because of a lack of public support and funding.

In the area of Southern Philadelphia, there are three graveyards noted on the National Park Service’s National Register of Historic places, two of which are associated with The Bethel Church and one with another church in the area known as Union Mission (or Union A.M.E.)  While these church-side graveyards share a similar political and social history to the Bethel Burial Ground on Queen Street, the Queen Street burial ground stands out historically as one of the few primarily African-American burial grounds that was physically separate from church property.

Estimates from burial documents indicate that somewhere between 3000 and 5000 burials were carried out at the site between the years of 1810 and 1864, many of which were buried in simple pine-box coffins.  The fact that so many of Bethel’s congregation lived in poverty, and that many who did not belong to the Bethel congregation but were buried in these once-public burial grounds lived in poverty, likely contributes to the lack of above-ground visibility for the burial ground; few individuals interred at the Bethel Burial Ground had lasting headstones or decorative caskets.

One of the few headstones discovered at the site belonged to Amelia Brown, which was broken and separated from the original site of burial.  Despite being displaced within the site, the headstone dates back to 1819.  While little is known about Amelia Brown, Mother Bethel has undertaken the task of preserving the headstone and attempting to learn more about one of the thousands who were buried in the Queen Street Burial Ground.

While burial records on the site are incomplete and spotty at best, some burials have been confirmed from a documentary perspective as having occurred within the grounds at Queen Street.  These include a number of early African-American religious and political leaders of the South Philadelphia area, many of whom were associated closely with Reverend Richard Allen, the founder of Mother Bethel A.M.E. and the proprietor of the graveyard.  Reverend Allen’s 1810 petition to purchase the burial ground from the city was bold and revolutionary for the time.  At that period of Philadelphia’s history, there were very few privately held burial grounds for African-Americans in the city.  Racial prejudice and prejudiced cultural beliefs were still widespread among the white population of Philadelphia, making the political atmosphere around burial grim.

Because burial space was so limited within the city, layered interments were commonplace.  This is especially evident at the Bethel Burial Ground.  The 2013 archaeological dig revealed that fill had been added to the site repeatedly over the decades to make room for additional graves.  Coordinating information from the dig with records held by Mother Bethel revealed that the elevation of the burial ground actually changed over time as a result of the import of fill.  It is possible that the repeated addition of fill may have contributed to the misplacement of other headstones, if any do exist.

Interments in the Bethel Burial Ground ended in 1865 and the site allegedly fell into disrepair.  Half a decade after active use ended in the Burial Ground, the trustees of Mother Bethel A.M.E. struck a deal with a sugar refiner named Barnabas Bartol that decreed that the site could be used for the storage of his equipment, provided that the graves were not disturbed.  Unfortunately, this bargain does not appear to have been kept on Bartol’s side.  Bishop Benjamin Turner of Mother Bethel stated, as recorded by Terry Buckalew, originally reported in the August 3, 1872 print of the Christian Recorder, that the graveyard had become “a most shameful spectacle – old hogsheads, and barrels and lumber of every conceivable shape.  Not a gravestone unbroken, not a grave to be seen.”

Bartol proceeded to quit the lease early, but not before reaching an agreement with the church to construct a new fence for the grounds.  Following Bartol’s exit, the grounds went nearly untouched for years, apparently only seeing use as an empty playground for the children of the neighborhood who were likely entirely unaware of its previous use.

In 1889, the City of Philadelphia decided to convert the burial ground to a small nature park that was to serve as a place of respite for the people of Southern Philadelphia.  The plans for the park were drawn up by District Surveyor Thomas Daly, and, by 1895, the burial ground contained paths and landscaping.  This park was to be known as Weccacoe Square.  While development of the park began fairly innocuously, it quickly became contentious.

Sometime around 1895, the City began expanding the park at the cost of displacing many of the families who lived in the row houses surrounding the originally small burial ground.  As the project expanded, many families were forcibly removed and had their homes demolished to make room for the park.  The park was then subdivided into approximately 250 beds which were given to the Public Education Association for use by grade schoolers as educational grow beds.  Over time, playground fixtures were added to the site.  Thankfully, most of the renovations of this era of the grounds, including the grow beds, did not damage the underlying graves.

The next major changes to the site occurred in 1924.  The soil was re-leveled, a small facilities building was constructed, and, as far as records show, the iron fence that still exists on the site was laid.  The facilities building was used for restrooms and included laying bricks and piping directly into ground that belonged to the Burial Ground proper.

Further renovations in 1954 and 1979 may have done more extensive damage to the original burial grounds, as they included the addition of a play fountain and a medium-sized recreational building.  The 2013 archaeological survey was unable to determine the extent of damage, if any, these renovations caused, as it would require further digging and demolition.

While the 2013 investigation was by no means comprehensive, the findings seem to indicate that many of the graves and burial shafts are likely undisturbed, despite renovations.  As of 2015, the Bethel Burial Ground is officially listed as a place of historical significance recognized by the National Park Service.  Despite the neighborhood that contains the burial ground being a previous National Park Service NRHP nominee, no mention of the burial ground was made in that nomination.

In the end, the future preservation of the site will be largely left up to the City of Philadelphia and the local communities.  One can only hope that the history that resides just below the surface of this local park will be respected and cared for by its future stewards than by those who took charge of its keeping in the past.

Hours are seasonal, based on the hours of the public park that now resides on the location grounds.