The nineteenth century saw a dramatic rise in the number of insane asylums in the United States. Historians do not agree on why, but several factors may have played a role in this increase. Among these factors is the evolution of the United States into an increasingly service-centered economy, resulting in the commercialization of such health services.(1) The Hastings Regional Center originated under these circumstances, and has evolved to fit the medical needs of the community into the present day.

The Hospital for the Incurable Insane in 1887-1888. The facility's first building. Courtesy of: Adams County Historical Society 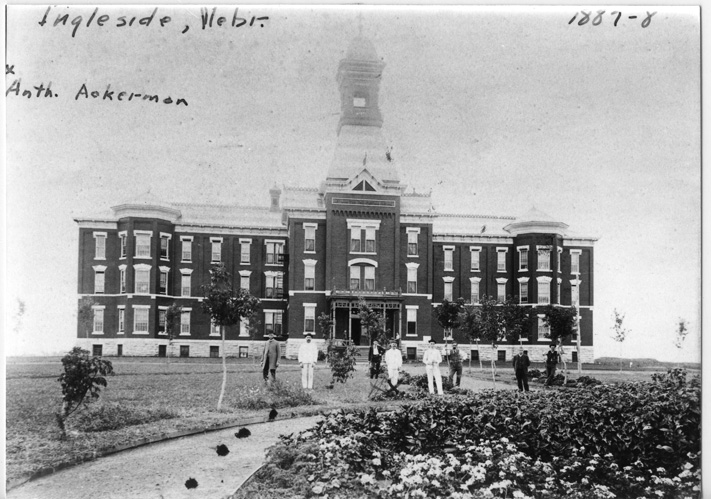 One of the Regional Center's many buildings. Courtesy of: Adams County Historical Society 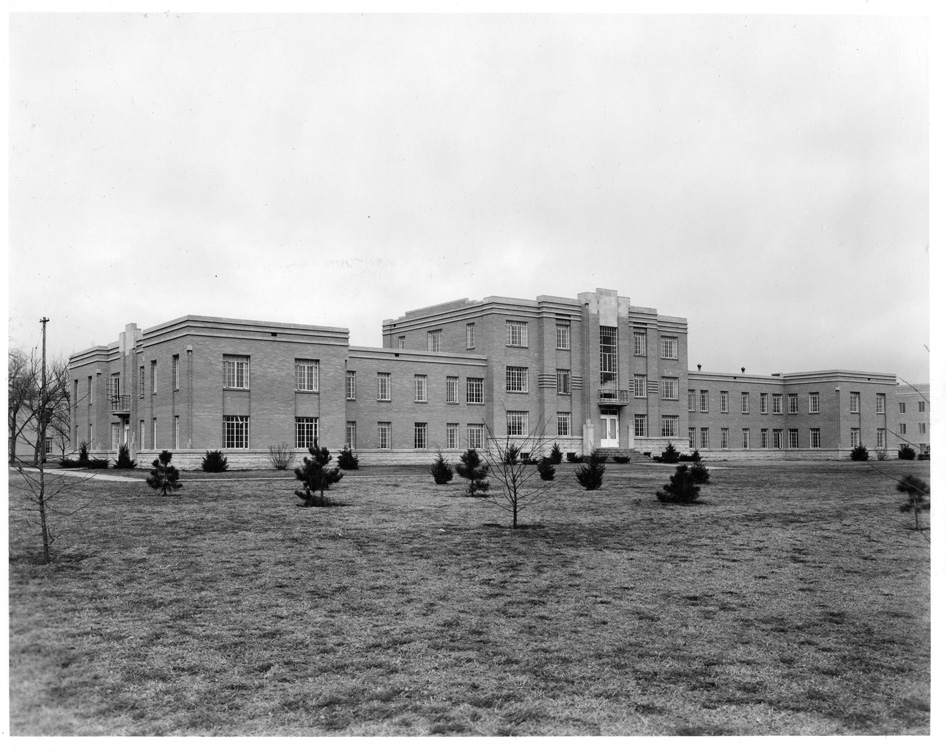 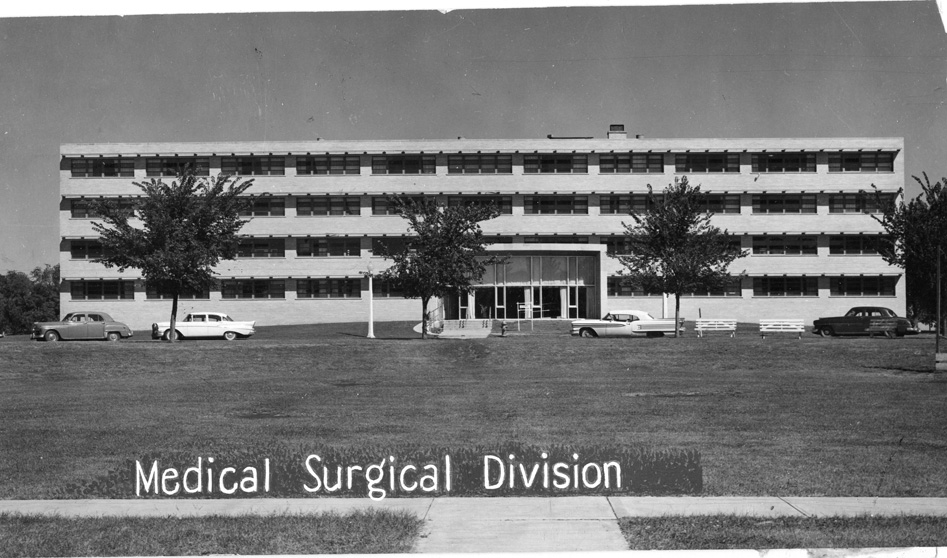 Arial photograph of the Hastings State Hospital on a postcard circa 1940. Courtesy of: Adams County Historical Society 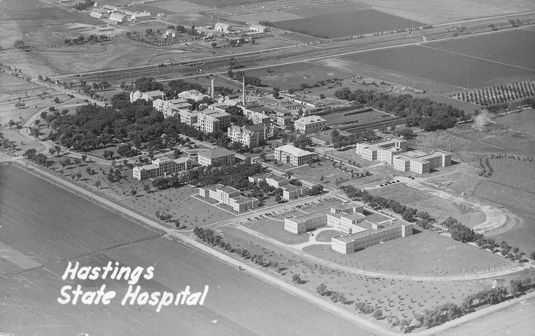 Illustrated photo of the Nebraska State Hospital circa 1913 on a postcard. Courtesy of: Adams County Historical Society 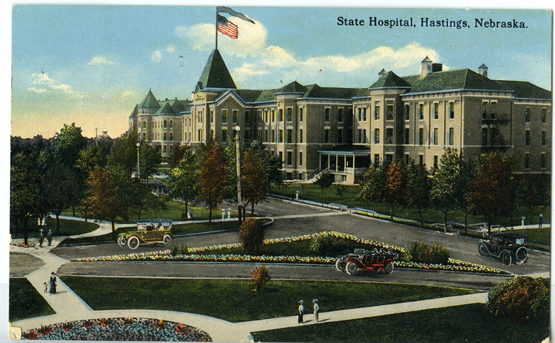 Since its first building was erected in 1888, the Hastings Regional Center has served many purposes for the state of Nebraska and the Hastings community. The Center came into existence due to the need to reduce the number of patients residing at state insane asylums in Lincoln and Norfolk. Hastings was declared a good location and in 1887 the state legislature granted $75,000 for the building of a state asylum for the incurably insane.(1) Citizens of the city purchased 160 acres of land on which the asylum would sit, and at its largest the institution grew to encompass 630 acres.(2)

The first patients were brought to the then-named Hospital for the Incurable Insane on August 1, 1889.(3) Forty-four patients were transported from Lincoln to the new permanent residence in Hastings.(4) At this time the purpose of the institution was to house, and attempt to treat, those patients who had been deemed to be "incurably insane." Conceptions of insanity in the late 1800s were very different from today, however. Cases of insanity were examined individually and relied heavily on cultural factors such as moral ideals.(5) The diagnosis of insanity could apply to individuals who were homeless, in poverty, physically disabled, or troublesome to their families.(6) In Illinois, for example, it was legal for husbands to commit their wives to asylums if the head of the institution agreed.(7)

Around 1895 concern began to arise regarding the name of the facility. The facility’s Superintendent, Dr. Johnston, expressed that it was unfair to refer to the facility as being for the "incurably insane."(8) Some patients at the facility could understand the meaning of the name and its implication that they would never be released.(9) This was damaging to patient morale, which lowered their quality of life. Dr. Johnston began calling it the Asylum for the Chronic Insane, and the name stuck.(10) Though the name had changed, the purpose of the institution remained the same.

The State Legislature of 1905 changed the name again to the Nebraska State Hospital. The use of the facility as solely for chronically insane patients was phased out along with this name change. It now served as a hospital for all classes of insane patients in the state. In 1915 the legislature renamed it again to Ingleside Hospital for the Insane. In the 1930s it became the Hastings State Hospital. It was renamed for the final time in the 1970s as the Hastings Regional Center, the title it still holds today.(11)

The Regional Center continued to grow and then shrink in size as its purpose and need changed over time. It started with one to two buildings in 1888, sitting on 630 acres of land. Expansions were added to the existing buildings and new facilities built in 1891, 1897, 1902, 1910, and 1914.(12) In 1904-1905 a farm cottage and two greenhouses were built on the land. In 1914 they added a diary barn with 66 cows. Patients would work in the greenhouses, gardens, and dairy barn as a mode of occupational therapy.(13) The food that they produced would be eaten by residents at the facility, and in 1939 more than 2000 people were consuming those items in some way each day.(14) The Center developed an advanced irrigation system to assist with these ventures. The Center also had its own power plant, electric light, train depot, and water works system. At its height it was practically a city unto itself.

In 1933 Dr. J.C. Nielsen became superintendent of the Center and began to introduce more modes of occupational therapy to accompany the farm work already being done.(15) Dr. Nielsen seemed to take a community approach to running the Center. During his tenure the families of employees would live on the grounds.(16) This made a special impact on the children of employees who were able to interact closely with patients and staff. From a young age many of these children were exposed to the reality of mental illness. They were very educated on the topic and viewed the patients as normal acquaintances against whom they carried no stereotypes.(17)

By 1987 the patient numbers at the Center declined to the extent that 40 acres were allotted to be a minimum security prison, rather than a part of the Center.(18) In 2000 the old Ingleside depot and a portion of the farmland were sold.(19) The Center also added and removed programming in order to compensate for changing patient needs over time. The focus of the Center shifted from permanent residence for the insane to more temporary in-patient programs. For example, in 1948 an alcoholic treatment center was added.(20) In more recent history a unit was added for the developmentally disabled in 2004.(21) Presently the Hastings Regional Center serves as a residential juvenile chemical dependency treatment facility.

Overview
1. Carla Yanni, "Building Up: Hospitals for the Insane After the Civil War," in Architecture of Madness: Insane Asylums in the United States (University of Minnesota Press, 2007), 105-144.

6. Sutton. "The Political Economy of Madness".