Rosa's Cantina opened up in the early 1940s and was originally called Los Tigres, the owner changed the name in 1957 to Rosa's Cantina. In September 1959 Marty Robbins released the song "El Paso" on his album Gunfighter Ballads and Trail Songs, this was considered one of the most famous country songs ever recorded. Legend has it that Marty Robbins stopped in El Paso on his long drive from Nashville to Phoenix, where he stretched his legs at Rosa's Cantina and saw the New Mexico badlands from the front door of Rosa's. He got back on the road and completed the song on his drive to Phoenix. The song won a Grammy in 1961 for best country and western recording.

Credit to Keith Pehle for photo. 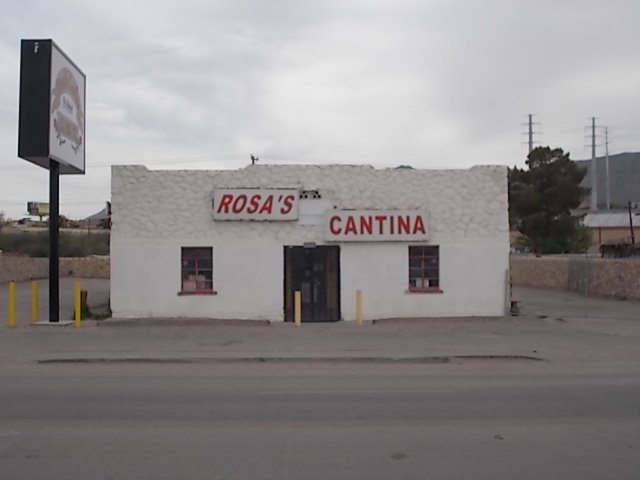 Credit to Keith Pehle for photo. 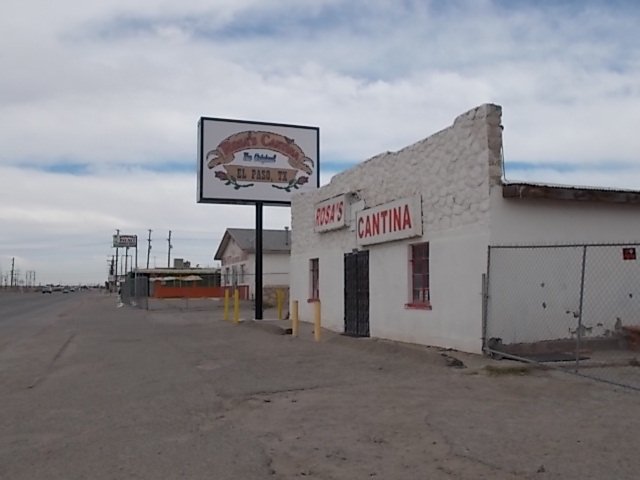 Rosa’s Cantina was opened in the early 1940’s under a different name, Los Tigres. In 1957 then owner Beto Zubia changed the name to Rosa’s Cantina. Up until the late 1950’s the bar was not noteworthy and was just like any other local pub. It was a neighborhood hangout that served the factory workers from the nearby smelters.

This area of El Paso was referred to as Smeltertown for the economic impact that smelting had on the west side El Paso community. Smeltertown was a large industrial area near Interstate Highway 10 in western El Paso County. The community came into existence with the construction in 1887 of the Kansas City Consolidated Smelting and Refining Company, later the company would be named American Smelting and Refining Company, or ARSARCO. The community faced many problems because of the poisonous gas being released into the air through the smoke stacks. In the 1970s Smeltertown found itself in the middle of an environmental controversy. The city of El Paso filed a lawsuit of $1 million against ASARCO; later the state of Texas would join the lawsuit claiming violations of the Texas Clean Air Act.[1]

In 1959, according to legend, the country musician Marty Robbins was on a long and weary journey from Phoenix to Nashville for a recording session when he needed a break from his long drive. It was in west El Paso where Marty Robbins found Rosa’s Cantina located conveniently off of the highway. He stretched his legs at Rosa’s Cantina and continued along his journey to Nashville where on the road he came up with the song “El Paso.” Marty Robbins released “El Paso” on the album Gunfighter Ballads and Trail Songs. A month later Columbia Records released the song “El Paso” as a single and was the first song to hit no. 1 on the charts in 1960, this song earned Marty Robbins his first Grammy Award. Robbins also released two additional songs which continued the story of Feleena, called “Feleena” and “El Paso City.” [2]

Oscar and Patricia Lopez took ownership in 2007, they have continued the tradition of one of El Paso’s most storied bars, which is a bar that is famous, but does not brag about being famous. The humble tradition of Rosa’s Cantina will remain with everyday working men and women stopping in for a beer after a long day’s work, and playing the song “El Paso” by Marty Robbins. Rosa’s stands on what was the former main road between El Paso and Albuquerque, minutes from the Texas- New Mexico border. Rosa’s Cantina is a small unassuming bar, but it has an international following. Rosa’s guestbook shows visitors from all over the world. The bar offers dinner and drink options to be enjoyed by listening to the old school jukebox. [3]

Hembree, Clint Lanier and Derek. “Rosa’s Cantina -- One of the Most Famous Bars in the World (Though You Wouldn’t Know It).” Huffington Post(blog), December 12, 2013. https://www.huffingtonpost.com/clint-lanier-and-derek-hembree/one-of-the-most-famous-ba_b_4416345.html.