Dedicated in 1999, this monument commemorates the heroism of Second Lieutenant Leonard Lomell who led his fellow Army Ranger in World War II. Lomell successfully disarmed German coastal defenses by grappling to the cliff and climbing to the top. Most did not make it to the top, but those who did helped Lomell defeat the German battery and disable their heavy guns. Lomell was also awarded a Silver Star for his acts in Hürtgen Forest.

The monument for Leonard Lomell is replica of a grappling hook the men used to climb Pointe du Hoc on D-Day. 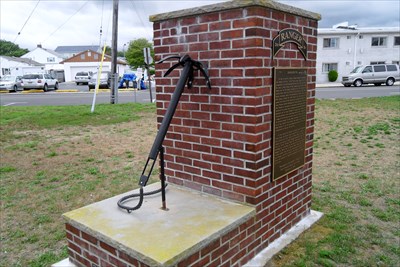 A painting depicting Leonard Lomell and his men shooting and climbing up on top of the cliff at Pointe du Hoc. 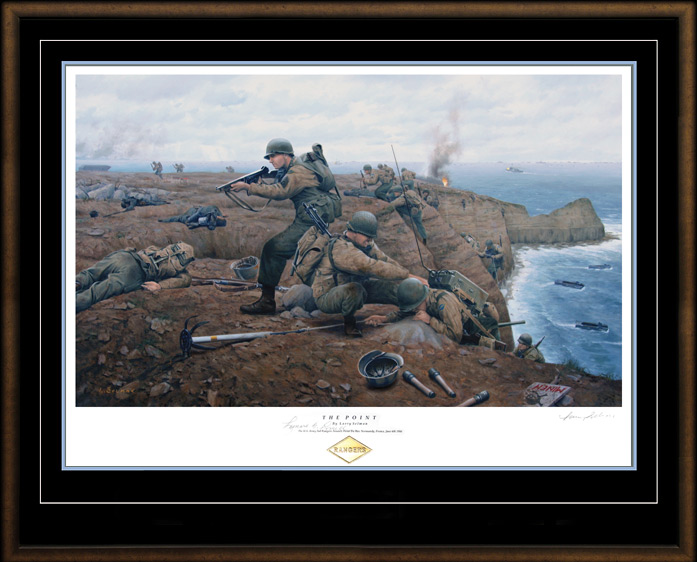 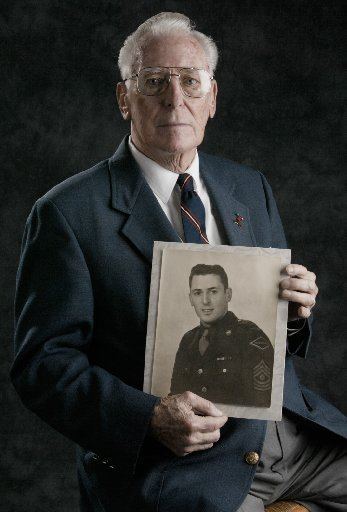 The monument of Leonard “Bud” G. Lomell is in Veterans Park, Point Pleasant Beach, New Jersey. The monument was added in 1999 for Lomell’s fierce attack on D-Day. Leonard G. Lomell was born January 20th, 1920 in Brooklyn, New York and was raised in Point Pleasant Beach. He graduated from Point Pleasant and worked at Jenkinson’s Beach in the Summer. Leonard Lomell was in the Army originally, he served with the 76th Infantry Division before he volunteered for the Rangers. After the war, he pursued a successful career in Law. He lived to be 91, passing away in 2011. When Lomell was 24-years old, he was the First Sergeant and commander for the 2nd Ranger Battalion’s D Company. His objective on D-Day was for the Rangers was to locate and disarm guns sitting atop Pointe du Hoc, which sits between Utah and Omaha beaches. It was vital the mission was successful because the guns had a clear advantage on the Beach. This was considered one of the most important parts of the invasion, the guns needed to be destroyed to up hold the safety of the soldiers storming the beach.

On June 6th, 1944, Lomell and his men headed for the Normandy Beach. The German guns had clear, long range of the beach, jeopardizing the safety of the Allied soldiers.  The Rangers once on land went to the cliffs to cast their grappling hooks. Leonard Lomell took one step into the water and was the first injured. Luckily, there was no serious damage and he pushed on. This mission was very complicated because as the American soldiers were attempting to scale the wall, the Germans tried to cut the rope and shoot them down. At this phase many were hit, killed or fell from the rope.

The few who were able to reach the top of the cliff stunned the Germans but discovered no guns. While the fighting continued at the beach, Lomell at the top of Pointe du Hoc needed to find the missing guns. Lomell and two other Rangers ventured off, following tracks going inland. They came across the five missing guns concealed with no one guarding them. Lomell and his men using explosives and grenades destroyed the guns allowing the costal defense left vulnerable. Although this was one of the most underrated successful missions of the invasion of Normandy there was severe loss of life. Lomell landed with 225 Rangers and only finished with 90. Almost half of their troops were gone.

Six months later Lomell does another heroic act during the Battle of Hürtgen Forest, this time earning him a Silver Star. The Americans led an attack on Hill 400, but commanders dropped one by one. Leonard Lomell stepped up and led the attack on a German weapon shelter, pushing the Germans toward surrender. The Germans would attack back several times but could not get the upper hand. Lomell was injured once again, shrapnel hit his left arm leaving it unusable. The perseverance by Lomell to succeed and command his men after being injured was the sole reason for his Silver Star. By the end of the day only 25 Rangers were left, holding off until reinforcements arrived.

Leonard Lomell played a small role in a huge cause, but still not earning him the recognition he deserves. Only locals knew of the heroic acts Lomell contributed, until a book was written in 1985 on World War II heros, the chapter, “The Greatest Generation” dedicated to Lomell. During the course of World War II, Lomell had several awards and accomplishments, a few would be, Silver Star, the Distinguished Service Cross, earned a battlefield commission as 2nd Lieutenant, Bronze Star, and other notable awards. Lomell was eventually inducted into the Ranger Hall of Fame. The monument of Lomell at Veteran Park, in his hometown Point Pleasant, shows a grapnel hook used to scale the cliffs on the D-Day invasion.