In addition to being one of Sacramento’s oldest church structures, St. Paul’s Episcopal claims the title of oldest continuously functioning parish in the city, being directly descended from a small Episcopal community that first met in Blacksmith shop in 1849. After residences in several structures through the 1800s, the cornerstone of St. Paul’s present structure was laid in 1903. The church features some of California’s most prized stained glass windows, which were donated by prominent parishioners Leland Stanford and Mrs. Charles Crocker, respectively.

A photograph of the brand-new structure in 1910. Its granite walls and flying buttresses, reminiscent of a traditional English church, are rare in California (CA State Library). 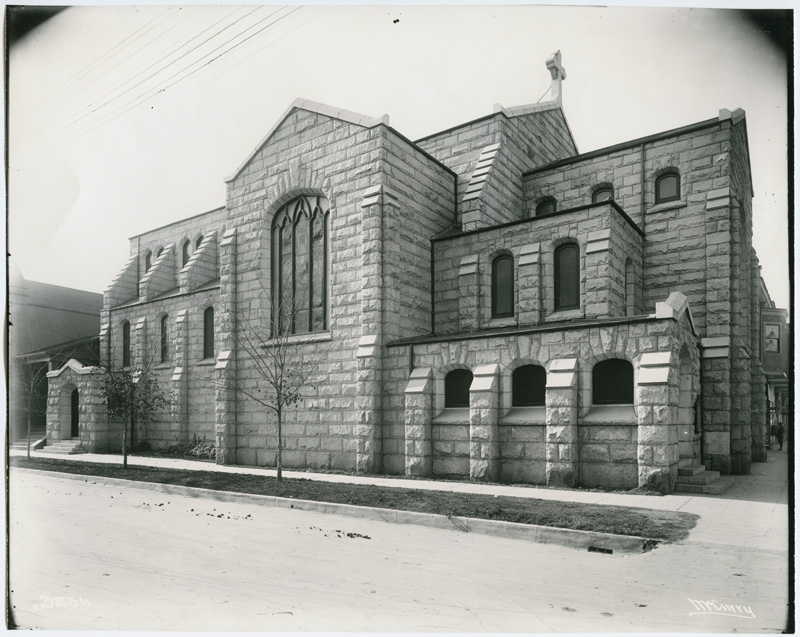 A 1930 postcard depicts the church with no visible changes from its original form. The exterior of the church has undergone few alterations in over a century. 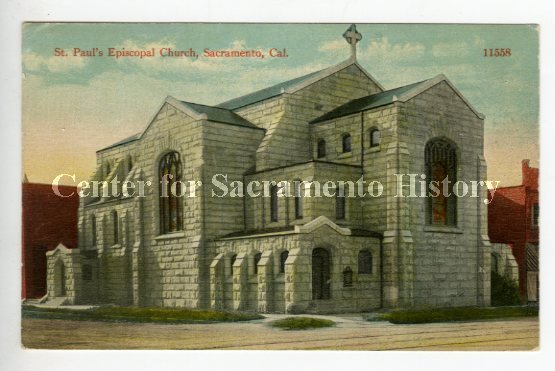 The Grace Episcopal Church in 1857, only a year after its construction. Seating up to 300 parishioners, it was torn down in 1871 due to structural problems. Its replacement bankrupted the congregation and gave birth to St. Paul's. 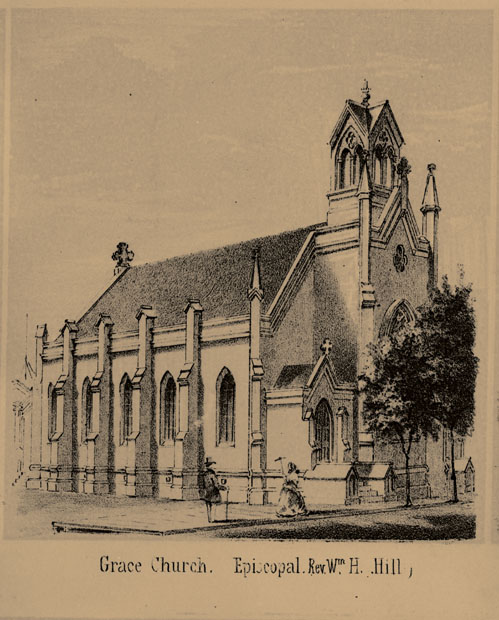 An 1857 bird's-eye view of Sacramento. Grace Church is depicted in the top row, third from left. It had played an important role in the civic development of the city, as the city's first formally organized congregation. 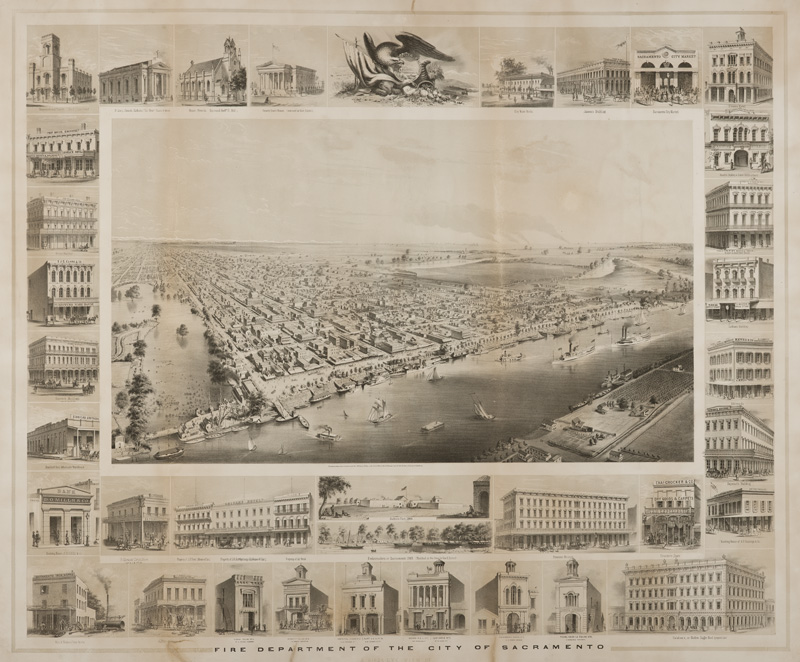 The famed Stanford window was donated by ex-governor and Transcontinental Railroad pioneer Leland Stanford to commemorate his son, who died at a young age. 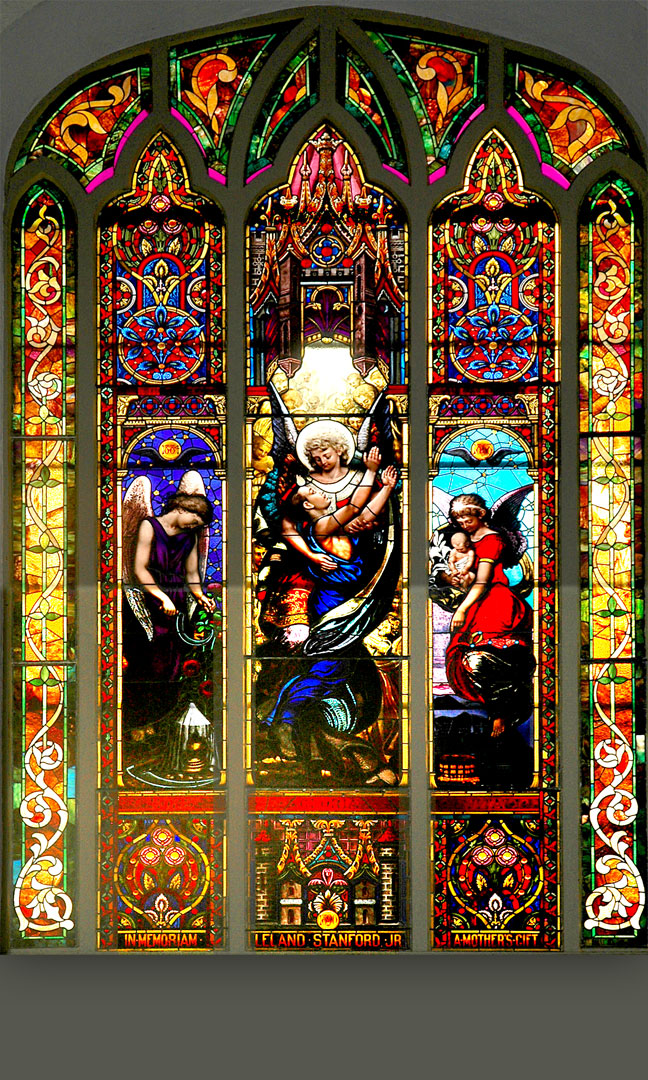 The church's 1877 Tracker organ, donated to the church in 1918, is one of the oldest organs on the West Coast. Many visitors come to St. Paul's for the organ alone. 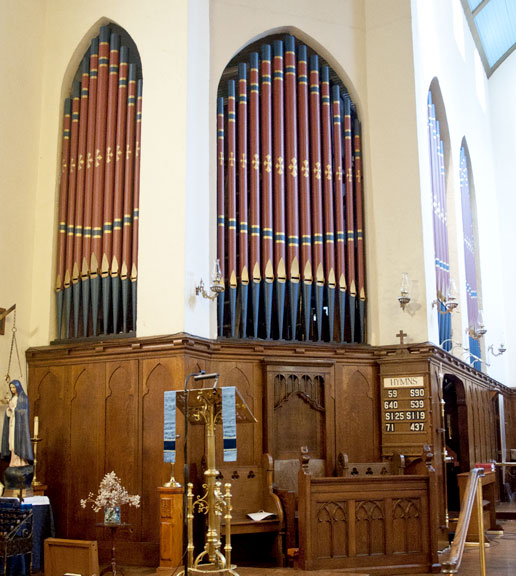 A 1938 view westward down J Street, which has long been one of Sacramento's most important boulevards. St. Paul's is at left (CA State Library). 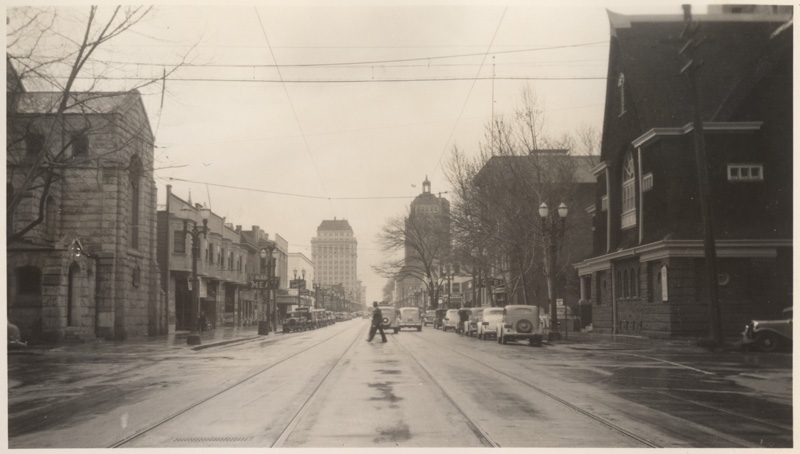 A June 1906 article in the Sacramento Union detailed St. Paul's monetary woes, which if left unanswered would have resulted in a half-finished structure. The photograph depicts the church still roofless. 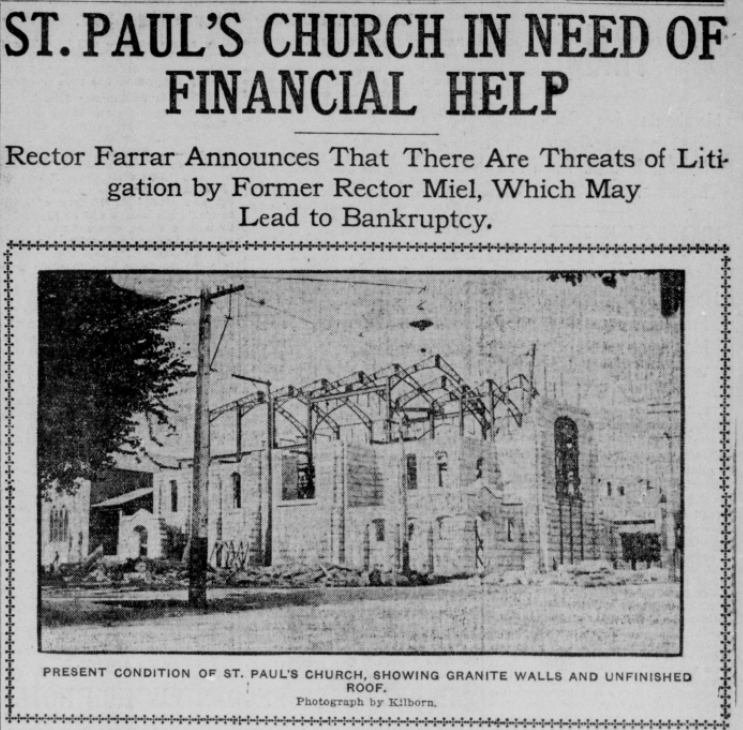 The first few years of the new century were difficult for St. Paul's. The year after the church narrowly averted bankruptcy, St. Paul's rector's home was pillaged while he was giving the Sunday service. 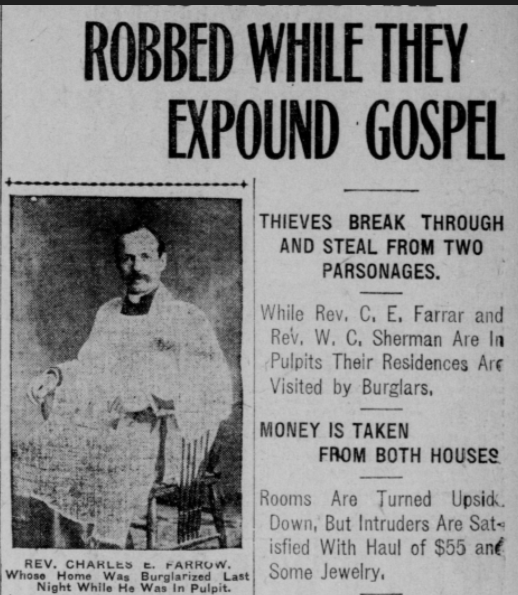 Shortly after the sinking of the Titanic, then-Rector Farrar used the event in a sermon to illustrate the dangers of overemphasizing the material world. 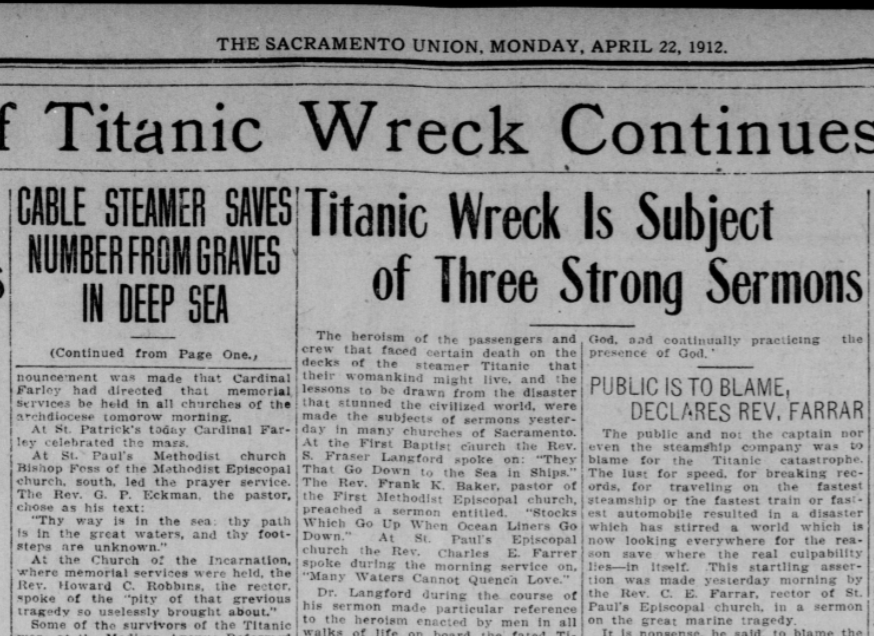 Former California Governor Leland Stanford (L) was moved to donate the Tiffany-made stained glass window in memoriam of his son, Leland Jr. (R). The young Stanford died of typhoid at the age of 15. 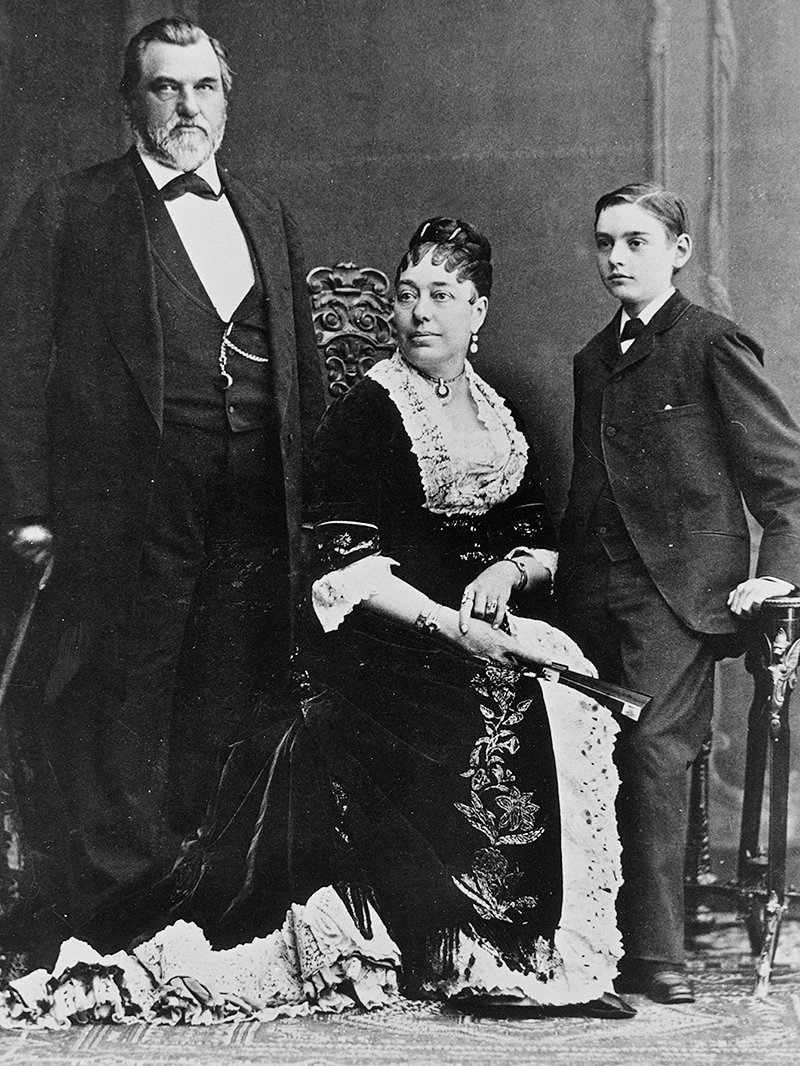 The roots of Sacramento’s oldest church parish predate even the ratification of California’s statehood. In the midst of the Gold Rush, an Episcopal pastor arrived in August 1849 from San Francisco and noted the complete absence of an organized church community. The first service that month was held in a Blacksmith shop on 3rd Street, between J and K Streets. The following day, the freshly-minted parishioners formalized their newfound community as “Grace Church” in the store of member Eugene Gillespie.

Though attempts to establish a permanent home for Grace Church were severely impeded by the great floods and fires of the next two years, on 29 July 1854, “Grace Protestant Episcopal Church of Sacramento” was legally incorporated. In 1856, a brick church was finally erected with seating for 300. Fifteen years later, however, the walls of this structure had begun to settle, and a new building was commissioned nearby in 1871. Owing to a dip in membership, however, Grace Episcopal found itself unable to pay the debt on its new $26,000 structure. By 1877, the church was bankrupt.

This was not to be its end, however. Grace’s community rallied and, with the help of some wealthy patrons, purchased the building and started fresh as St. Paul’s Protestant Episcopal Church in March 1877. A fresh surge of activity accompanied its rebirth, and during the 1880s and 1890s prominent Sacramentans like the family ex-governor and rail tycoon Leland Stanford and that of his Transcontinental Railroad compatriot, Charles Crocker, were part of the parish. Stanford and his wife donated a massive stained glass window to memorialize their young son, who had recently died. Mrs. Crocker donated a stained glass window in memory of her son’s wife. When storms in the 1890s damaged the church structure and it was condemned, these priceless memorial windows were removed for installation in the new church.

Construction of the current church commenced in 1903--one of the few stone churches in the state at the time. Later called “one of the finest ecclesiastical edifices in the northern part of California,” its construction was not without controversy. By 1906, the parish was heavily in debt due to the new church’s construction. Former Rector Charles Miel, who had led St. Paul’s for several years, had used considerable personal funds to keep construction going. Upon leaving the church to pursue business, St. Paul’s was unable to repay him, and he threatened to sue. The resurrected specter of St. Paul’s bankruptcy was front page news for the Sacramento Union newspaper in 1906, when the half-completed structure still lacked a roof.

The community rallied once more, and by October 1911 the granite, gothic structure was substantially completed enough to host the “First Annual Convention of the Protestant Episcopal Church in the Diocese of Sacramento,” for which St. Paul’s became the headquarters. This would change by the 1960s, as plans were already underway for the Trinity Cathedral (which also remains in the city to this day).

Nonetheless, St. Paul’s Episcopal has retained its place at the historic heart of Sacramento--an architectural rarity for its resemblance to traditional English gothic churches--and still features the famed Tiffany-made stained glass of the Stanfords (though it was temporarily removed for fear of damage during the neighboring Sacramento Convention Center’s expansion in the 1990s). The memorial window commissioned by Mrs. Crocker was destroyed in a 1914 fire, and was replaced by a piece commissioned later.

St. Paul’s place in the community has also been further cemented by its acoustics, which have made it a much-demanded concert venue through the decades--a reputation further enhanced by its possession of a Tracker organ built in 1877, one of the oldest organs on the West Coast.

A Birds-eye view of Sacramento Capitol of the State of California. [1857]. Retrieved from the Digital Public Library of America, http://catalog.library.ca.gov/F/?func=find-b&request=001378560&find_code=SYS. (Accessed April 4, 2018.)