Construction began in 1930 on this statue commemorating the contributions of the Central Pacific Railroad’s lead engineer, Theodore Judah, who planned the Transcontinental Railroad’s route through the Sierra Nevada and Rocky Mountain ranges. “Crazy” Judah’s determination to perform an industrial feat once thought impossible was one of the driving forces behind the Transcontinental Railroad’s creation. The monument was dedicated in 1931 in a municipal park near the Southern Pacific Railway station, and was relocated to Old Sacramento after Interstate Highway 5 was built through the city.

The inscription at the base of the monument commemorates Judah's pivotal role in the Transcontinental Railroad's creation, "that the west may remember." 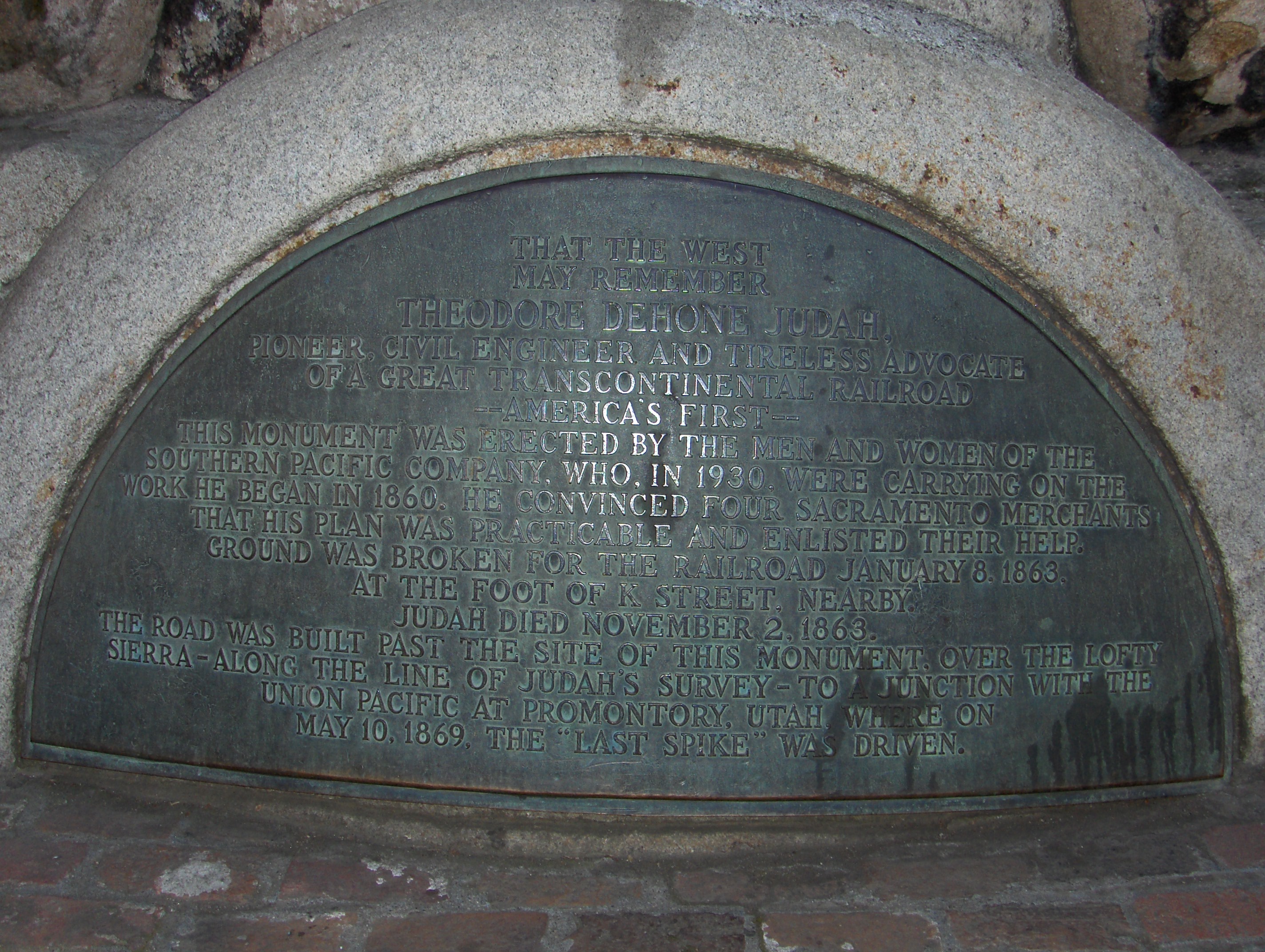 Theodore Dehone Judah was only 37 years old when he contracted yellow fever on the way through Panama--the fastest journey before the Transcontinental Railroad's completion. He died in November 1863. 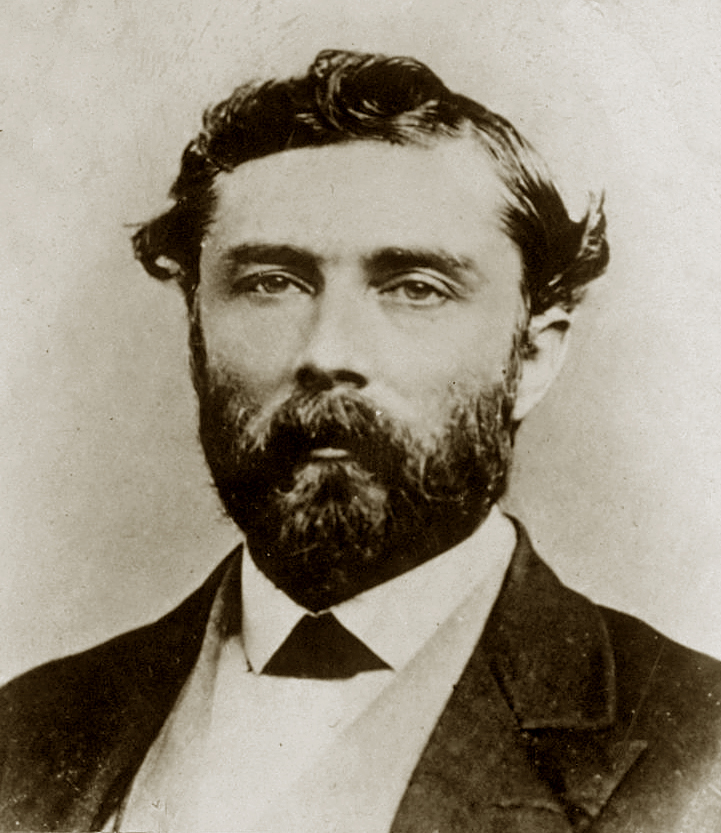 The foundation is prepared for the monument to be placed in Old Sacramento State Historic Park. 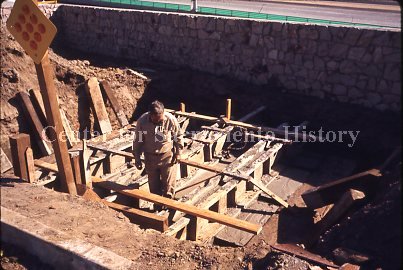 The monument on a flatbed trailer, awaiting placement at its current home. 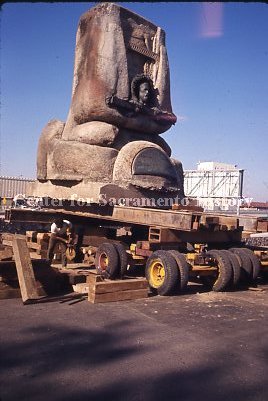 The Pacific Railway Act of 1862, from the Library of Congress. 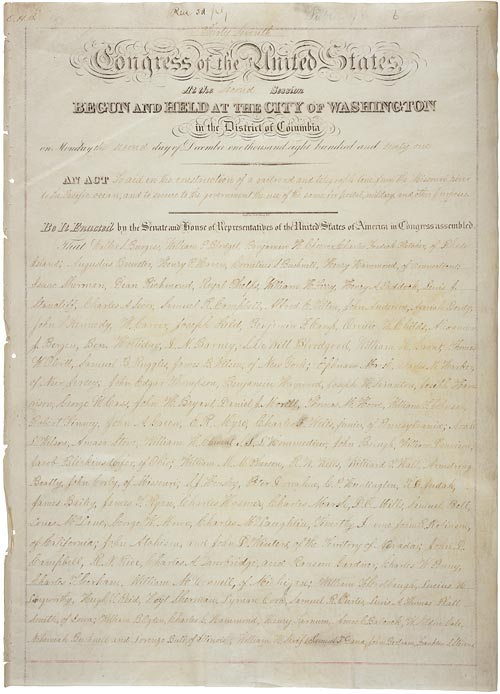 A view of the monument at its current location. Originally sponsored by Southern Pacific employees, it was located near the Southern Pacific railyard in Sacramento before being moved for Highway 5. 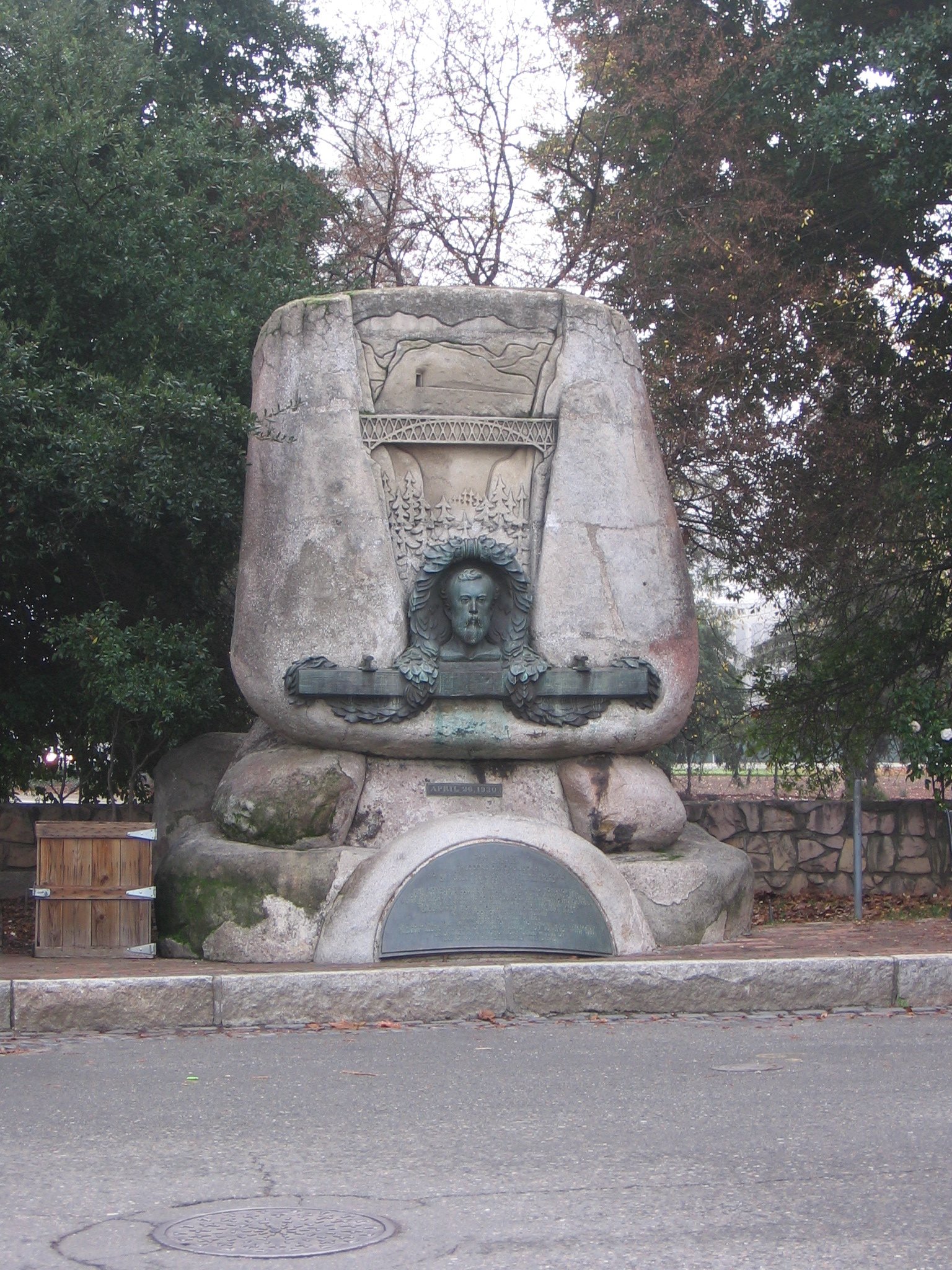 “[The Transcontinental Railroad] was the burden of his thought day and night ... Time, money, brains, strength, body and soul were absorbed.”
- Ann Judah, wife of Theodore Judah

Born in Connecticut in 1826, Theodore Judah began his training as a civil engineer in as the railroad boom in the eastern United States was just beginning. He took to the budding industry quickly, serving as an engineer for railroads in Massachusetts, Connecticut, and New York before landing a job as Chief Engineer for the challenging Buffalo, New York & Erie Railroad. In 1852, however, he was enticed to California (admitted to the Union only two years before) to spearhead a new railroad in the Sacramento Valley--the first in the new state.

Judah’s true obsession, however, was a railroad that would connect the country from coast to coast. His dedication to the unborn project eventually earned him the nickname “Crazy Judah,” as many people felt it was too difficult or too expensive to build a railway through the Sierra Nevada and Rocky mountains. To make matters worse, the antebellum politics of which route the new railroad would follow were labyrinthine at best--through the 1850s, as tensions mounted between the Northern and Southern states over the issue of slavery, powerful politicians fought bitterly over whether the nation’s greatest transportation endeavor would pass primarily through slaveholding states or free.

To Judah, meanwhile, the problem was simply one of engineering: he spent much of his time and funds in surveying prospective routes through the mountains in preparation for the railroad he knew must someday come. In 1857, he traveled back to Washington D.C. on his own dime and tirelessly shadowed the boardrooms and committee meetings of lobbyists and politicians. He developed a keen understanding of Washington dynamics, and composed a 13,000-word pamphlet, “A Practical Plan for Building the Pacific Railroad,” highlighting the engineering challenges ahead and pointing out that most of these Machiavellian maneuverings were pointless when little or no surveying had actually been performed. He returned to California without making any headway, only to be sent back to Washington in 1859 to lobby on behalf of the new western states and territories.

Sectionalism prevailed once more, and no legislation was approved to aid the railroad’s extension westward. Judah kept working, at last finding his desired route over Donner Pass in 1860. He and a partner began meeting with Sacramento investors, eventually entering into business relationship with the future “Big Four” and forming the Central Pacific Railroad. The investment capital was secured to seed the railroad’s construction.

When the Civil War erupted two years later, it turned out to be a blessing in disguise--the Southern faction was no longer part of the route-making process, and the Union desperately needed to maintain communication with its western territories. In 1862, Congress at last voted to fund a portion of the Transcontinental Railroad, whereby the Union Pacific would build from the Missouri River westward into Utah, and the Central Pacific would extend eastward from Sacramento to meet them.

On the eve of the realization of Judah’s dream, conflict erupted among the Central Pacific’s board members. Judah’s idealistic budget had factored in little profit for the railroad’s principal investors, and soon other board members had submitted falsified surveys to secure a higher margin of government investment. Upset at this duplicitous arrangement and increasingly isolated by the board’s machinations, Judah decided to exercise a last-ditch option to buy out the rest of the board. He boarded a ship for New York to seek other investors, but contracted yellow fever during the journey and died in November 1863, before the first piece of track in his great Transcontinental Railroad had been laid. The famous “Big Four” took over the majority of the enterprise, and much of Judah’s role was erased for decades.

Nearly sixty years after his death, employees of the Southern Pacific Railroad company (originally a subsidiary of the Central Pacific) commissioned a monument to Judah. It was placed in a municipal park near the Southern Pacific rail depot, but removed when Interstate Highway 5 was constructed through the area. Kept in storage for years, it was eventually relocated to Old Sacramento State Historic Park, where it remains close to many other landmarks concerning the Central Pacific Railroad’s construction.