This historic marker relates the history of Confederate raider John Hunt Morgan as he and his men attacked communities in southern Ohio. Near this location on July 24, 1863, Morgan and his remaining force of about 500 men continued efforts to evade a pursuing Union force while raiding area farms. Following the Battle of Bluffington Island, Morgan continued to attack communities in southern Ohio and hoped to cross the Ohio River. However, his force had dwindled from its original number of 2,000 men and supplies were depleted. As he approached Piedmont, Morgan and his men became more fatigued as they looked for supplies. Morgn's troops burnt the bridge at Collinsport (the location of this former bridge is now within the man-made Piedmont Lake) in order to slow down their pursuers. Morgan was only able to delay his pursuers for a short time as he was soon caught at Salinesville.

Piedmont Lake, where the bridge burned by Morgan's men used to be 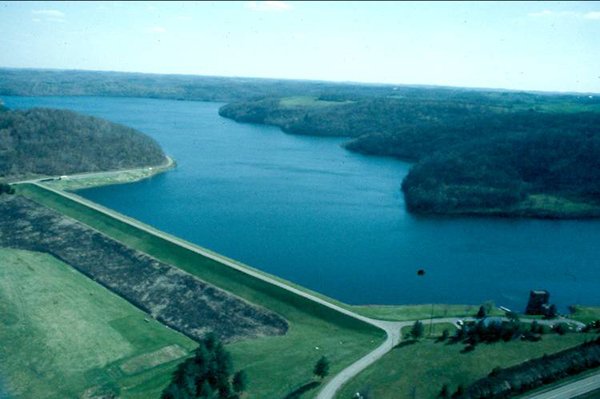 In June 1863, Brigadier General John Hunt Morgan was ordered by General Braxton Bragg to invade the Southern parts of Ohio and Indiana in hopes of diverting Union troops from their ongoing offensive against Confederate troops in Tennessee. Morgan's force of over 2,000 cavalrymen were ordered to create havoc among the Northern states and to draw attention to his units in hopes of reducing pressure on Confederate forces elsewhere. Although his raid coincided with the Gettysburg and Vicksburg campaigns, Morgan's raids did more to disrupt life for Ohio residents than it did to change the overall Union strategy.

Morgan's men first invaded the Southern part of Indiana to find supplies and rally Copperheads (Northerners who supported the Confederacy) in the area. Major General Ambrose Burnside quickly looked to defend Ohio and issued a call for troops to protect the state. Following his quick raid through Indiana, Morgan moved into the Western part of Ohio on July 13th 1863. Morgan was able to slip past the Union stronghold at Cincinnati and begin his long raid into the Ohio countryside in the days that followed.

Fierce battles followed Morgan as Union cavalry and Ohio militias followed Morgan through the Eastern and Southern parts of the state. After the battle of Buffington Island in West Virginia along the Ohio River, Morgan turned towards Eastern Ohio and was looking to cross the river and move back into the South.

Being pursued by Union soldiers, Morgan looked to keep his men fed by raiding area farms while also avoiding a skirmish with the Federals. With a depleted force, Morgan and his pursuers continued the chase throughout Eastern Ohio with little rest. With little supplies, Morgan's men plundered local farms and stores in order to find food and other necessities. Brigadier General James Shackelford, the commanding officer pursuing Morgan and his men, likewise battled fatigue in order to catch Morgan.

In order to slow his pursuers, Morgan ordered his men to burn the bridge at Collinsport. Union soldiers were so close to catching Morgan at that time that they could see the burning of the bridge. They would catch him shortly there after at near Salinesville.

The city of Collinsport and the location of the bridge is currently underneath Piedmont Lake as the U.S. Army Corps of Engineers created a dam in 1937 and impounded Stillwater Creek. A bridge has replaced the bridge in the small town of Piedmont just down the road from the original location.