At this location, visitors can see part of the original railroad that was constructed by Henry M. Flagler in the early 1900s. The railroad changed the small islands of the Florida Keys in the early 1900s, just as it did southern florida. Flagler saw the great potential of Florida and invested heavily in real estate and railroad construction starting in the 1880s. The Overseas Railway was an extension of this vision and constructed between 1905 and 1912. Until its destruction by a hurricane in 1935, it brought in goods, money, and tourists by the thousands. The project was considered the eighth wonder of the world at the time and was later replaced by the highway that connects the Florida Keys to the mainland.

Pictured is part of the old railway that ran through Bahia Honda Key partially destroyed by the Labor Day hurricane. 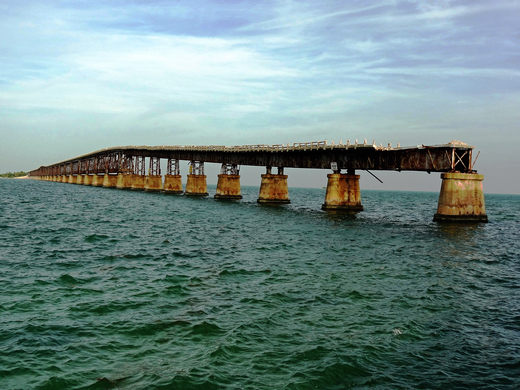 The Seven mile bridge was one the the most challenging parts of the project. To the right was the railway and to the left is the newly built roadway. About two miles into the seven mile bridge (southbound) stands Pigeon Key. Here, more than 400 workers st 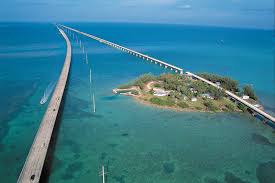 A photo of the old railway. 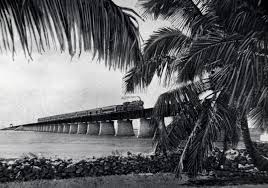 The overseas railroad was created to generate growth in the southern parts of Florida. Henry. M. Flagler became a very successful businessman with the help of John D. Rockefeller when they established the Standard Oil Company in 1870. After this, Flagler purchased a small portion of a railroad that started in Jacksonville and ran through St. Augustine. This soon began to reach down the east coast towards Miami and be named the Florida East Coast Railway. In 1885, Flagler decided to expand this railway to support industry and tourism and real estate development. Key West was the closest deep water channel to the Panama Canal and would bring in an abundance of trade possibilities. The entire project cost totaled over $50 million. Materials from all over the world were brought to help build and maintain the railways. Steel from Pennsylvania for the tracks, cement from Germany and Belgium, gravel from the Chesapeake, to name a few. The construction officially began in 1905, though the first segment of the railway was not completed until 1908 (homestead to marathon). 4,000 men were employed throughout the stretch of the tracks.

Marathon then became business central. Cuban ships brought pineapples and limes to transport throughout the US. Thus the trade within the Caribbean increased as well. The sponge and cigar industry thrived with the help of the railway. The first train to Key West carried its own Henry M. Flagler in 1912. Upon his arrival, he was greeted with heroism and joy. The Keys and its residents thrived with the help of the railroad.

After the Great Depression hit, the population of the Florida Keys dropped from 20,000 to 12,000. The sponge industry moved north to Tarpon Springs and the cigar industry to Tampa. An extreme loss of resources caused production to slow and residents started to turn to government assistance. In 1928, the county-funded the establishment of roadways parallel to the tracks because as the American dollar grew, it was cheaper to haul cargo by car than by train. On Labor Day in 1935 (09/02/1935), the Florida Keys were hit by a hurricane that halted the project and took 432 lives. The production of the railway was never reconstructed due to expenses. The old overseas railroad still stands in some parts of the keys as a great reminder of the beginning of the eighth wonder of the world.

About the Overseas Railroad. 30 March, 2018. http://overseasrailroad.railfan.net/about.htm.