Fort Barry (1908-1946), constructed in 1908 in the Marin Headlands was apart of a string of forts spread around the San Fransico Bay Area to help defend the west coast from impending attack and defend merchant shipping. In 1902, the army constructed new seacoast fortifications at Fort Baker, just inside the Golden Gate Strait.The army recognized the need for additional defenses, outside the Golden Gate strait, and constructed Fort Barry and its batteries for this purpose. Fort Barry was named in honor of Brig. Gen. William Farquar Barry, a Civil War U.S. Army artillery officer who distinguished himself during the capture of Atlanta.

This photo shows Fort Barry nestled within the Marin Headlands. The army intentionally constructed the buildings around the main parade ground and planted trees around the post to provide necessary breaks from the wind. (photo circa 1928). 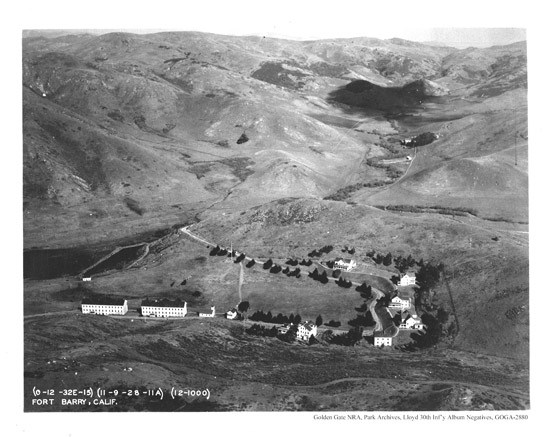 Battery Mendell’s 12” gun, installed on the state-of-the-art “disappearing carriage”, capable of firing a 1,100-pound artillery shell at enemy ships up to eight miles away (photo circa 1910). 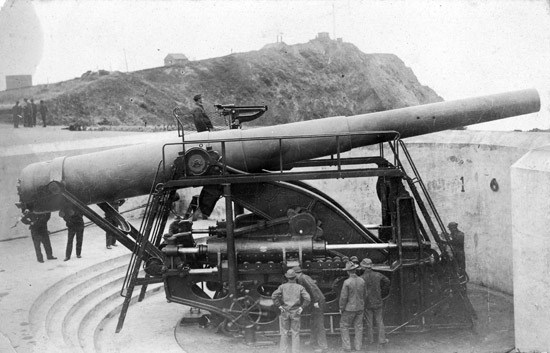 Fort Barry functioned as a small, self-sufficient town that supported the needs of the soldiers. The post had its own barracks, hospital, guardhouse, spacious officers’ residences, stables, storehouses, even its own bakery. Fort Barry’s wood-frame, three-story barrack buildings represented an improvement in military housing. Prior to the Endicott period upgrades, living conditions in the U.S. Army were dismal; most buildings were poorly constructed, cramped and unsanitary.  The Fort Barry barracks, which housed over a hundred soldiers each, reflected a new standard for a healthy living environment and provided the men with open, spacious sleeping wards, numerous windows and real beds and mattresses.  All the Fort Barry buildings were built with electricity, hot and cold running water, and proper toilets and shower facilities.

By 1905, the army constructed five powerful batteries at Fort Barry that represented the new Endicott-period upgrades: Battery Mendell, Battery Alexander, Battery Smith-Guthrie, Battery Samuel Rathbone and Battery Patrick O’Rorke. Battery Mendell would be the first gun constructed in 1901, the purpose of Battery Mendell and the four other fortifications were to fire 1,100-pound artillery shells at enemy ships up to eight miles away. When the guns were ready to fire they would rise from their positions fire a single shot at the enemy target then recoil down into a hidden position where the guns and soldiers manning it would be protected by a large concrete parapet.

Between 1922 and 1938, there was no permanent garrison assigned to Fort Barry.  But in 1939, on the eve of World War II, the post was officially reactivated and troops were again assigned to man the batteries. Fort Barry now fell under the jurisdiction of the Harbor Defenses of San Francisco. Because of advances in military aviation, the military could now expect enemy fire not only from ships but now also from the sky, in the form of accurate bombers and strafing fighter planes. As a response, anti-aircraft guns were installed along the coast to protect the uncovered and vulnerable batteries from aerial attack. Along with the threat of chemical attack, all bunkers were made gas proof. By the fall of 1942, fears of an immediate enemy attack faded. The alert warning for the coastal defenses was downgraded to a level “B,” which allowed men to return to their barracks as long as they could reach their battery stations in 15 minutes. Between 1943 and 1946, Fort Barry’s battery armaments were removed and scrapped and in the fall of 1946, the last of the Coast Artillery troops left Fort Barry.