David May, a prominent local attorney, constructed these residences from 1857 through 1859. These units are three stories over raised basements, leveled according to the hill sloping. These transitional, Victorian style row homes reveal a married set of architectural schools. The pediments on the first- and second-story windows and porches are Greek-Revival style, while the bracketed cornice and flat roof features are Italianate. 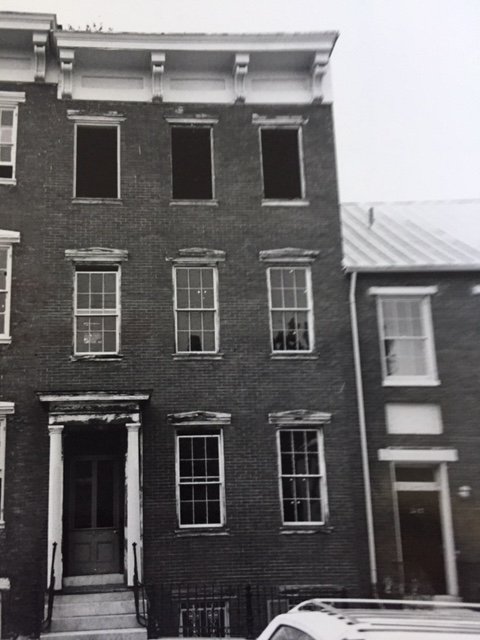 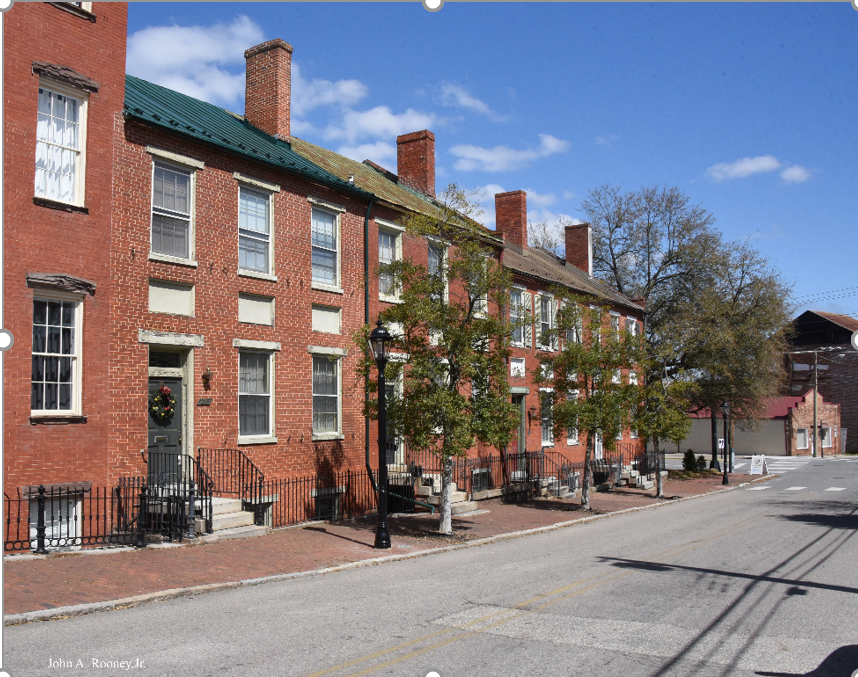 David May, a prominent local attorney, constructed these residences from 1857 through 1859. These units are three stories over raised basements, leveled according to the hill sloping. These transitional, Victorian style row homes reveal a married set of architectural schools. The pediments on the first- and second-story windows and porches are Greek-Revival style, while the bracketed cornice and flat roof features are Italianate. The bracketed cornice is ogee curved in shape. Pressed bricks were laid in running bon pattern with narrow butter joints. The 217 address retains its brownstone lintels and sills in their original form. An article in The Progress-Index by James H Bailey in 1957 discusses the history and ownership of the houses throughout the period. One resident there was famous artist William Skinner Simpson, Jr. He captured familiar scenes around the community and area in small watercolor or crayon drawing. Praise for the work is not only for their intrinsic artistic merit, but also in evocating the vanished face of the nineteenth century Southern town at the time. Many of his works are found in museums and local sites, even the National Gallery of Art in Washington, D. C. As a Confederate veteran, he was also largely instrumental in the establishment of the soldiers’ section in Blandford Cemetery. For a time, Richard G. Pegram, Commonwealth’s Attorney of Petersburg prior to the Civil War, resided at 223. He was captain of the famous “Pegram’s Battery” in the Lee Guard Artillery of the Confederate army. Another famous occupant at the same address was the widow of Robert Emmet Robinson, Jr., a grandson of Dr. Thomas Robin, eminent Petersburg physician and friend of Edgar Allen Poe.

Each unit is three bays and three stories, plus a basement. Relatively new 10’ addition has been added to the read, making the buildings approximately 55’ deep. Basement walls are brick, with a reddish-brown natural finish. There are a total of ten brick chimneys, two for each unit plus two at the far left end where an additional home was once attached. Four exterior doors exist for each unit – one at the front, one at the rear, and another on the first floor. There is also a door at the landing of the stairs to the second floor. At one time, a porch probably opened off the landing. Original windows remaining are all double-hung with six lights each sash. Window sills have a small lip projection and the lintels are in the shape of a shallow pediment (except the basement). Small covered porches with moulded cornice at the roof life are found at each entry. These are supported by two wood columnns, one on each side, and an areaway leading to the basement. The roof is flat and slightly sloping with joists running between party walls. There is also a trap door to the roof from the third floor hallway.

In the interior, rooms on all floors lead off of a hall along the left party wall. The front entry is left of center, with a staircase opposite the entry at the far end of the hallway. The two large rooms of similar size on the first floor are connected by a large double doorway in the center. First floor ceilings are 12’ high and there is a curved wall where the hallway jogs around the staircase. The remaining floors have a similar layout. Wood plan flooring exists on most levels. Plaster walls remain in many of the rooms. The wood mantel in the front room, first floor, has a moulded, arched fireplace opening and flowered detailing near its base. Landscaping and walks have been modified. S. L. Reiss restored the 221 home in 1973 and kept much of the original woodwork, including a bullet-pierced timber in the basement. The 223 address is the western-most in the row, built on the eastern wall of May’s own house.